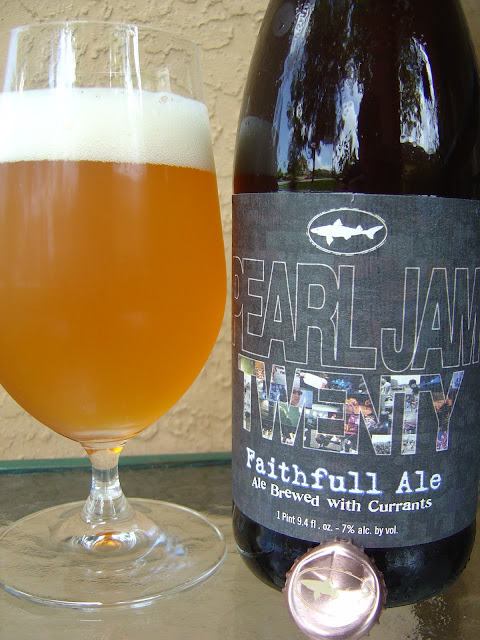 I finally decided to break out this bottle of Faithfull Ale brewed by Dogfish Head Craft Brewery in Milton, Delaware. This is a Belgian-style Golden Ale made to celebrate Pearl Jam's 20th anniversary of their TEN album. That is a great album too! On theme, the beer has 20 IBU and has had TEN additions of black currants. I was doing a bit of celebrating myself, as I crowned today #BelgianStyleGoldenAleWithCurrantsDay over on Twitter! Pretty coincidental, right? Party on!

The label on my wine bottle has block letters that say PEARL JAM TWENTY with little pictures cut into the TWENTY. It's a little hard to make some of them out, but I think they are just a bunch of scenes from the band playing. A little story on the side sets your expectations about the beer.

Yeasty aroma, berries, fruit, fairly weak. Sweet fruit, malt and honey are the main flavors in the beginning. The Belgian yeast is also very noticeable. There is a spicy tangy thing going on, which seems to be working with the fruity flavors. I guess that is the currant additions being known.

A bit sweet overall, not unlike Eddie Vedder. Dogfish probably had that in mind when they brewed this beer. The 7% alcohol was a little annoying right out of the fridge, but as the beer warmed, it became indistinguishable. Carbonation is good. Finish is dry.

Again, as the beer warmed, in addition to losing the alcohol presence, I felt the flavors blended together better. The yeast really started to grow to a crescendo. The sweetness never faded. Pretty decent beer overall. Not all wacky Dogfish, more like sorta-normal Dogfish, which was OK with me. Check it out if you can. 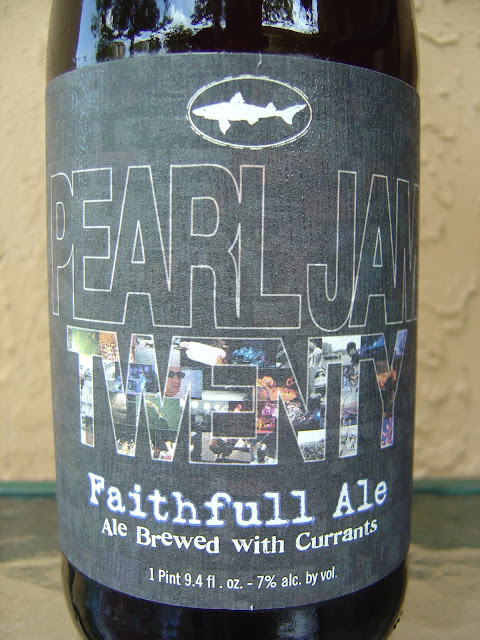