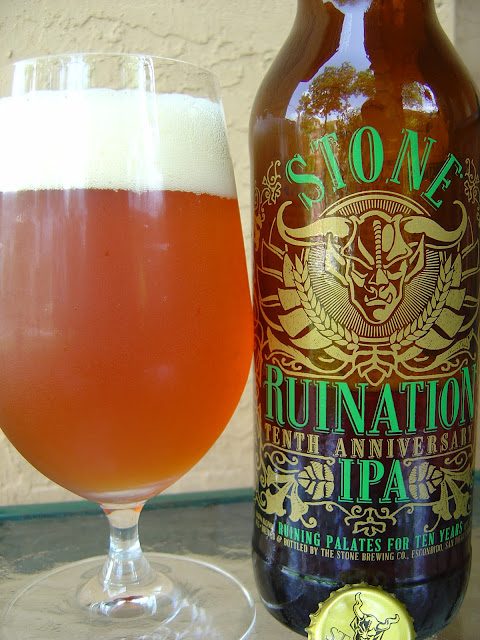 Every beer guy and gal has tried Stone Ruination. I first tried it in February, 2009, just a few months after starting this website. You can see that my palate was somewhat shocked, yet still intrigued. Fast-forward 3.5 years and Stone Brewing Company has come out with an anniversary edition of Ruination IPA. This one is their Ruination Tenth Anniversary IPA, marking 10 years since they first brewed the beer.

No, Stone didn't just change their fancy marketing and packaging and gargoyle pose for this beer. They also doubled the amount of hops used and cranked the alcohol content from 7.7% to 10.8%. Greg Koch made a video to tell you a little more, and it looks like he may have lost track of time while doing so. Don't you think he looks like he should be wrestling grizzly bears in the wilderness?

On the back of the bottle, some additional information, a little less braggy than usual. This story tells you about how Stone was one of the pioneers in creating Double IPAs. Russian River had their Blind Pig for several years, but Stone was the first to brew a full-time double IPA and bottle it. Seems to me like everyone does that style, but surprisingly, it really hasn't been around for so long. Very cool.

"Ruining Palates for Ten Years" is the catch-phrase on the front of the bottle, as a classic gargoyle prominently holds the fort. Enjoy Fresh. Big 22 bottle.

Big pine and tropical aroma. A little orange and citrusy too. Hoppy and a bit spicy. Very welcoming. The flavors are really intense and rich. Tropical fruity beginning, pineapples and peaches, extremely juicy and fresh. Pine trees come next, big and bold. Some hoppy and citrus and spicy bitterness, yes I can taste you. But there is still plenty of sweet caramel and malty balance.

The 10.8% alcohol is disguised almost to disappearance; however, there is definitely some heat, and I feel the alcohol enhances the peppery spiciness a bit. Oily, sticky texture, leaving a nice coat on the entire palate. Good body, nice carbonation.

The finish is the most bitter part about the beer. A little alcohol dryness shows toward the end too. NOT overly bitter as marketed but extremely delicious as promised. Juicy, oily, fresh, hoppy, enjoyable. Pick yourself up a bottle today! 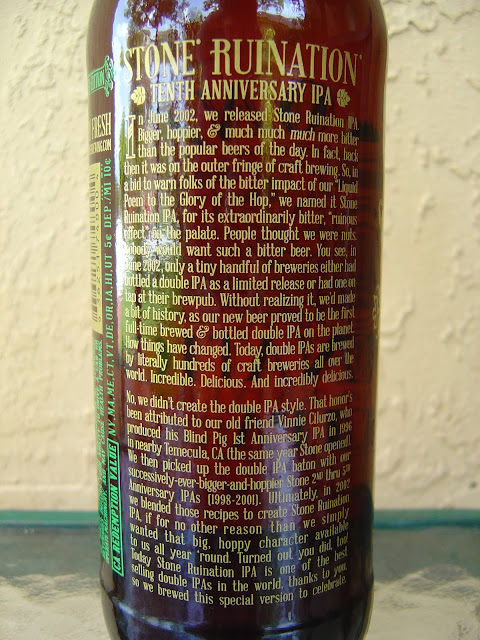 Posted by Beer Drinker Rob at 8:24 AM