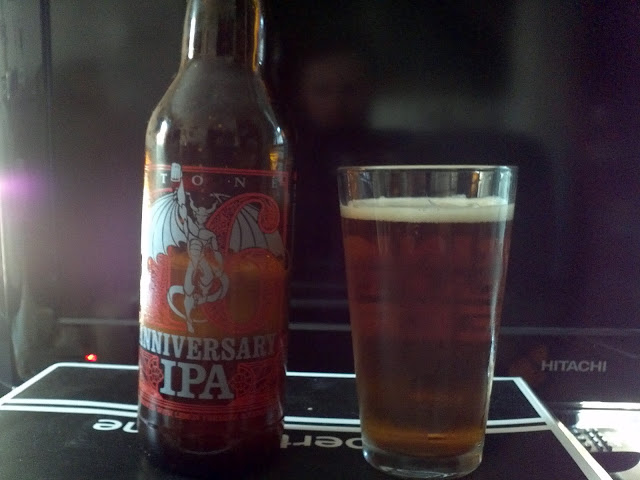 My friend Vinny came through with a guest post today. After you get a good look at the pictures he apparently took in a cave, you'll be glad to know that Vinny is an aspiring writer, not photographer. Either way, a smart-ass writing beer lover is OK in my book any day!

My first beer was a lukewarm Pabst Blue Ribbon fermented under a college senior's couch. The townhouse belonged to a girl who was 4 years older than me, and who I would date 3 years after she graduated. I think she was attracted to my ability to choke down really terrible beer. Through my time in college my beer of choice would shift from PBR to Labatt Blue to Bud Light to Coors Light to Coors Original (!) to Budweiser (colloquially known as Bud Heavy or Bud Diesel but never "Bud" in a college town). There was even a Milwaukee's Best phase that we don't talk about... it was college, I was experimenting.

I discovered my "eureka" beer (or accurately, my "hallelujah" beer) at Pearl St. Beverage Warehouse in Colchester, VT. While walking to the back room where they kept the munitions of inebriation in stacked 30 racks, a bottle in one of the coolers caught my eye. "ARROGANT BASTARD" it read. "YOU ARE NOT WORTHY." Hey, man, I'm an upper-middle class white male at a country club college in f**kin' Vermont; I think I'm PLENTY worthy! The Stone gargoyle emblazoned on the front kept smiling his mocking smirk. So I bought my first craft beer... and the rest is history. 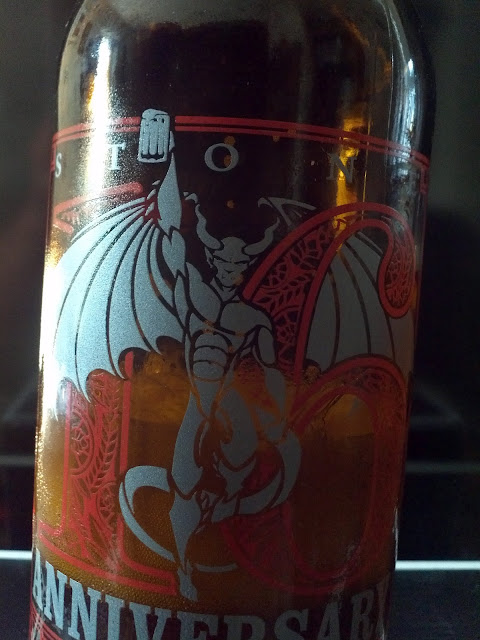 Every time I see the Stone gargoyle in his various incarnations I think back to that day and how far I've come. Not as a person, mind you, but as a beer drinker. So when I saw Stone's 16th Anniversary Double IPA, marked by a full-winged, gargoyle thrusting a might mug skyward, I snatched it up.

16 is to Stone IPA what Coke with Lemon is to Coke... and I mean that as a compliment. But if you failed the analogies portion of your SATs (what up!), it's like Stone IPA but with more bite, both from the hops and from the lemon. There's a lot going on in this bottle, almost like a battle on your tongue.

Aroma: Hop-forward like you'd expect with hints of citrus, specifically the lemon. Mint?

Taste: Clean and smooth, but with that classic West Coast hop-bitter finish, that says "you ain't from around here, are ya?" to the uninitiated. (Sorry, I wrote this while watching The Sopranos). Depending on where on your tongue you hold your swig you can either get the zesty lemon flavor or a little bit of spice, but with most Stone beers the hops are the moneymaker that's shaking. 16 earns every one of its 85 IBUs and most of its 10% ABV.

Mouth-feel: Like any IPA, after enough sips you start to feel your palate disintegrating. The feeling is a revelation the first time, but by my Untappd count, 16 is my 747th unique beer -- plenty of those were IPAs -- so to the regular IPA drinker, expect the usual IPA burn. There's a little heat in the throat from the alcohol, but overall the lemon really helps balance the hops to a more refreshing mouth-feel than you'd usually get from a DIPA.

Overall: 16 is a solid beer, which you should have come to expect from Stone. Is it anything earth-shattering? No, but if you were to write home about it, it would still be more interesting than the letters I wrote home from college.
Posted by Beer Drinker Rob at 8:26 AM

Arrogant Bastard was one of the first crafts I can remember liking, and for basically the same reasons. I've never had the 16 but I will give it a try. Well done, Vinny.

Stone certainly makes some excellent beers. I recall the Brooklyn Brewery and Rogues Saranacs to be some of my first.

I just had Chatoe Rogue's Pumpkin Patch Ale last night. It was excellent.