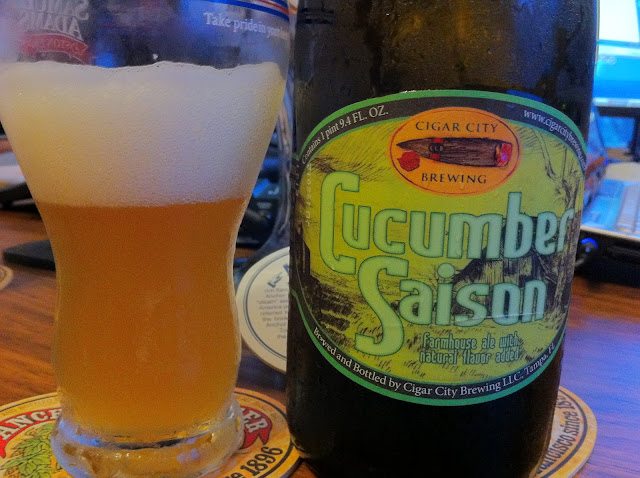 Hurricane Sandy descended on South Florida tonight. No, she isn't going to make a direct hit; in fact she decided to go after Fidel and hit Cuba instead. (Yes, this angle is directly relevant for this article.) What we got in South Florida was a shitload of rain and wind. Little League? Canceled! Car accidents? Numerous on my travel routes. Lakes on the road. Absolutely. In fact, when I arrived to the ByTheGlassShow.com studio tonight, I had to navigate "Lake SoFlo" on the way to the door.

But the show must go on. And we almost started without the star of the show, Phil from Cigar City Brewing. Phil literally showed up 4 seconds before we went on air. But he's ultra cool and acted like he'd been there prepping all day.

ByTheGlassShow.com host Brett Hubbard is on vacation this week, so King of Research Ed Roberts took the reigns tonight. Ed opened up with a bad joke about spitting or swallowing, based on his professional life at some liquor retailer. We moved on quickly to taste 5 different Cigar City beers.

The world famous Jai Alai IPA was the first beer we tried. Phil let us know that their current slogan is "Drink Fresh" and sure enough, he proved we were drinking fresh. Phil was at the brewery yesterday and snagged a few CANS from the line for us to try. Yep, the date on the bottom of the can was from yesterday. 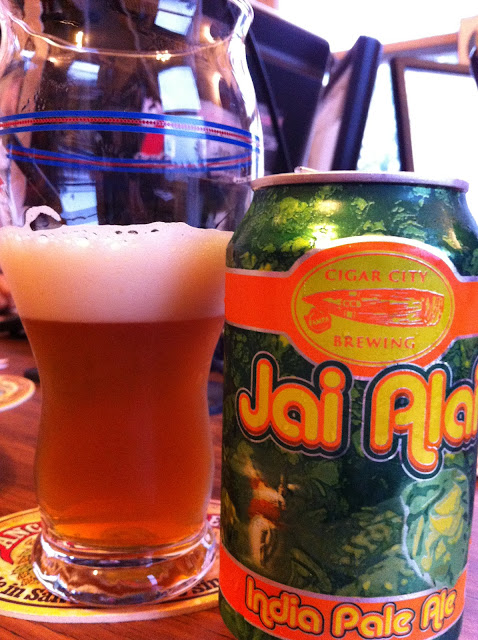 Apparently, Cigar City has started canning their beers, which is totally cool with me. They bought a canning line from New Belgium in Colorado recently and had one of the NB workers come down to help install it in Tampa. "Uncle Larry" never left. He installed the line and decided Florida was home. Pretty cool, right? Like a political defection.

The Jai Alai IPA from the can was super fresh, big citrus with plenty of tropical flavors. Yes, there was some bitterness, but even the anti-hops hosts loved it. Was great! And the cans were really nice too! Also, don't look for these cans for a month or more down here. Yeah, distance and bullshit distribution laws. 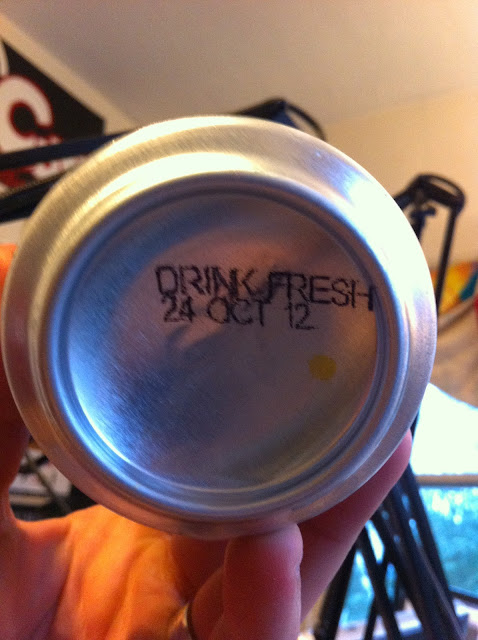 "But how can they install a new canning line? That place is cramped and tiny." Excellent question. Cigar City just completed a major expansion that will let them finally meet the demand of Florida Craft Beer Drinkers! Write that down!

Next up... Maduro Brown Ale. Yeah, we started chatting about cigars and sure enough, Jorge came through with some killer options. I grabbed an Arturo Fuente Gran Reserva. Sorry I can't be more specific than that. Phil got something else, and he, Jorge and I lit up. Sure, Hurricane Sandy was blowing rain and 40 mph gusts through the windows but whatever. I'm pretty sure co-host Jason caught a buzz too without even lighting up. 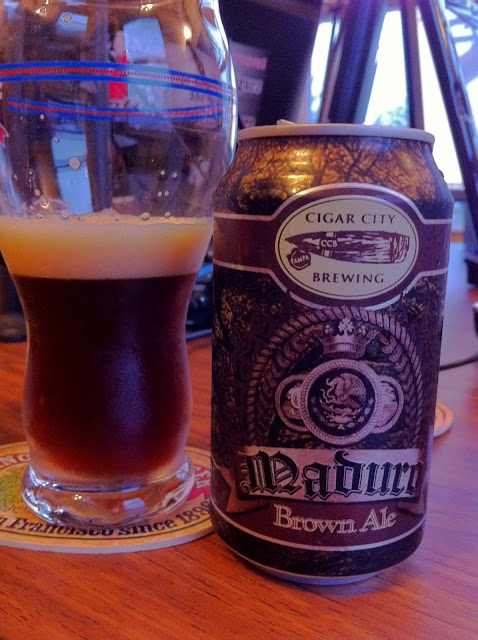 The Maduro Brown was a favorite of the night of pretty much everyone. Anti-hops Jorge especially loved it! We tried it canned and bottled. It tasted the same to me but the other experts thought the canned version was smoother, or something. Made with oatmeal, it was creamy and smooth, terrific flavors, easy drinking, and duh, the awesome reason I included it in my own recent beer tasting at my home.

Cucumber Saison? Yep. The pour was a challenge for Dio. We got a glass full of head, but there were second and third pours to get it right. When I tried this beer at home, I thought the cucumber was overwhelming, but on the show, I didn't feel the same way. The cukes were an awesome addition and proved to be a unique and really interesting ingredient.

Super refreshing, carbonation was big and awesome. There were definitely some yeasty flavors and a touch of funk. And who doesn't like Sorachi Ace hops (besides Gold Coast Distributors). This may have been my personal favorite of the night, though I really enjoyed every one of the beers being poured. 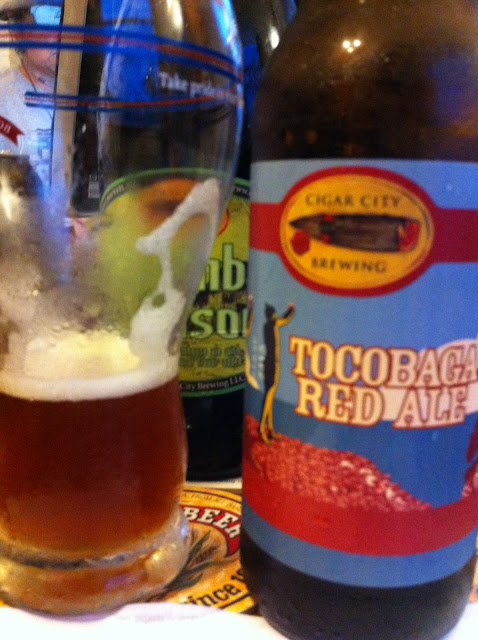 We moved on to Tocobaga Red Ale (yes I know that's a pretty crappy photo; click here for a better one). This is similar to Cigar City's Jai Alai IPA except that is has this awesome sweetness to add more balance to the overt hoppiness found in Jai Alai. I personally think this is one of the best regular beers the brewery offers, and yes, it does come in economical, non-bomber bottles.

The guys gave me a dated news flash that Brown Distributing Company, my local craft beer distributor, won the Craft Beer Distributor of the Year Award at the recent Great American Beer Festival. I'm not surprised at all. Those guys are freakin' fantastic and it's totally deserved! Not sure how that slipped my knowledge but I am personally proud of them. Congrats, Brown!

As we opened up the last beer of the night, Jai Alai aged on White Oak, Phil started to get all scientific on us. Apparently with the brewery expansion, Cigar City opened up a QA lab to do some real scientific experiments. That news perked my science-geek ears as I have a degree in chemistry from Cornell (ever heard of it?). Phil was more psyched that they have lab coats with their names on them and that they are propagating yeast. I understand. 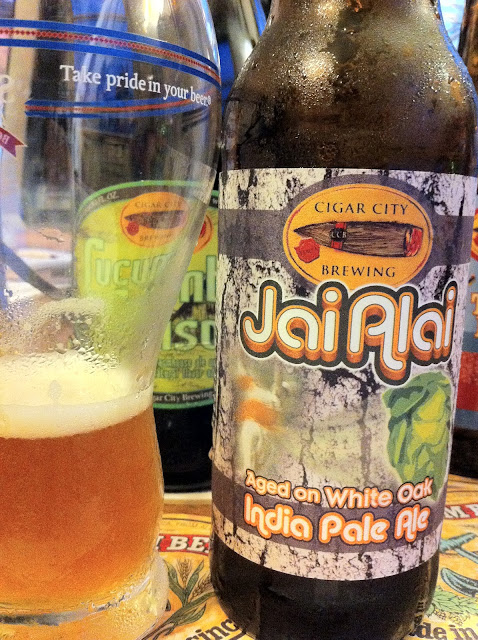 Jai Alai White Oak is aged 10-14 days on oak spirals and is a favorite amongst the beer geek community. I honestly prefer the non-aged version, but if wood is your thing, you can really taste the oak here. Dry, peppery with a hit of vanilla. Jason noted that the oak knocks down the hoppiness a bit.

The panel said two times that I was quieter than usual, which is impossibly untrue. I got more words in today than I ever have in my 6th show appearance. Asked questions, cracked jokes, smoked a cigar, drank five beers, and still had time to write down a lot of what you're reading, all in an hour.

Cigar City is now starting to make meads and braggots. They also now brew beer onsite at Tampa International Airport--I think I heard that is a first! And a brewpub will be opening soon in North Tampa. Phil is so gung-ho with "living the dream" that he got the brewery's bottle cap design tattooed on his bicep. Good luck when you stop working out, dude! 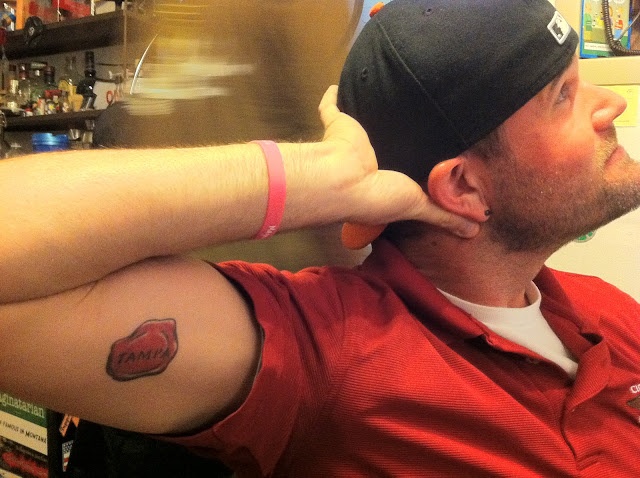 Before going on the show, I was asked what the Cuban connection was to Tampa, considering several Cigar City beer names have a Cuban theme. So I asked. Jorge jumped in to say it's all about how so many Cubans went to Tampa when Castro did "his thing" decades ago. They cultivated the land to grow tobacco and assimilated themselves into the local community: Cigar City.

Was great seeing Phil. Considering the weather, I didn't go to the after party at Original Fat Cats in Fort Lauderdale for the cask tasting of their Cinnamon Apple IPA. Was great seeing Ed too (don't want those two to be jealous). And as always, I was very pleased to be a guest on the show. Thanks to Jorge and Jason and Brett for continuously inviting me back. I guess I'm doing something right as the guest with the most repeats! 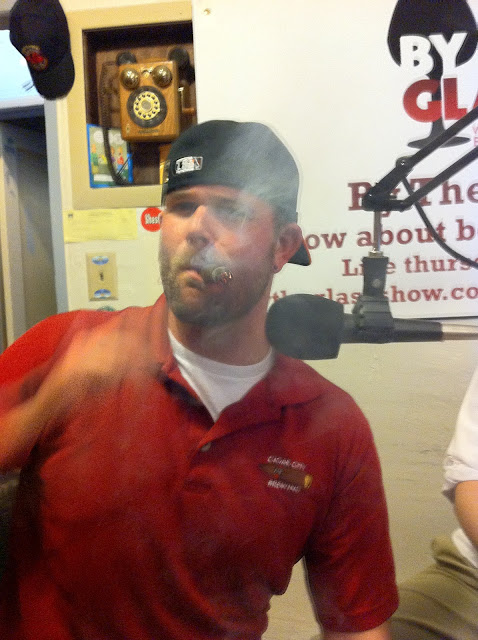