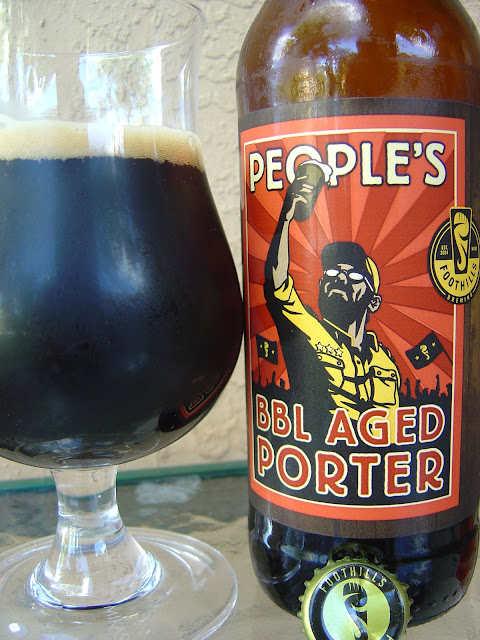 Ed Roberts asked me a week or so ago if I'd like an extra bottle he had of People's Porter, brewed by Foothills Brewing in Winston-Salem, North Carolina. What do you think I said? Come on, you know me better than that! Anyway, the story goes that Ed got two bottles in a trade. I have a few I'm going to give him too next time I see him.

People's Porter is a gold medal winning porter that has been aged in 20 year old bourbon barrels. Uh oh. I've been known to do a lot of hating on that type of beer. Let's see though. The label on Big 22 depicts a guy raising a pint of beer in victory to the delight of the cheering mob behind him. Truly a man of the people. The label also says BBL Aged Porter to denote the bourbon treatment. Alcohol 6%; SRM 30.7; IBU 42.

Roasty aroma with some sweetness from the bourbon and an very nice chocolate base. Chocolate and caramel are the most prominent flavors in the start and offer a nice initial sweetness. You will not miss the bourbon character either, guaranteed. However, the bourbon seems to be a positive and is not overdone. I think the fact that this is a 6% beer and not some alcoholic monster really allows the bourbon flavors to stand out in a positive way.

Light roast, a touch of vanilla and wood, and just a tiny bit of ash round out the flavor profile. Some hoppy bitterness takes the edge off the initial sweetness as well. Creamy, nice texture. Body is medium. The finish is dry and full of milk chocolate. REPEAT sips for this entire experience over and over again. No flavors ever get to the point of domination; rather, each works to create an enjoyable experience in a beer category that is not near the top of my list! Check it out if you can! 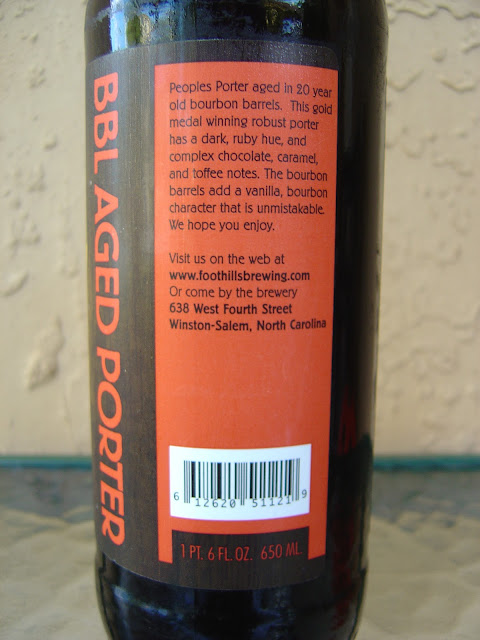 Posted by Beer Drinker Rob at 7:45 AM