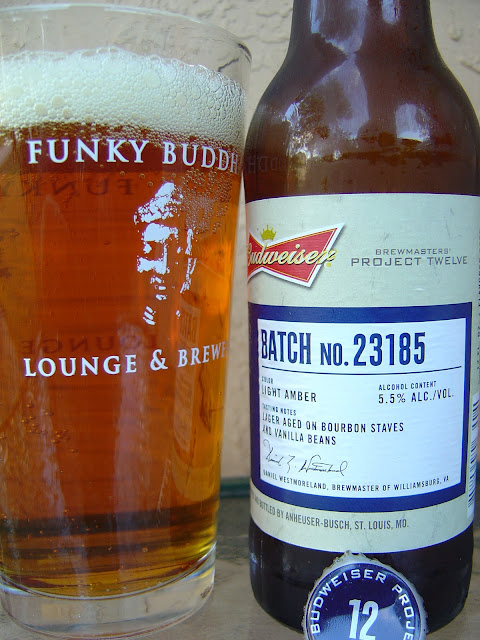 You guy have probably all heard how Budweiser launched a brewing competition to allow for some creativity at their breweries. I thought it was pretty funny since the only thing Bud does awesomely is make the same shitty beers identically in every corner of Earth. Greg over at Pour Curator actually asked Brewmaster Jane Killebrew (not "Kill a Brew, though they do that too; ba-ching) about that exact conundrum, and if she doesn't get elected to some political office some day for that answer, I'd be shocked! Go read it!

This competition called Project Twelve yielded three winners, each named for the zip code where the winners originally made it. I started with Batch No. 23185 created by Brewmaster Daniel Westmoreland of Bud's Williamsburg, Virginia brewery. The label notes this to be a light amber lager aged on bourbon staves and vanilla beans.

Sweet grain aroma with a touch of vanilla and oak. Grainy corn continues into the flavors with some watery bourbon in the background. You know, like what's left after you finish your bourbon on the rocks and let the remaining cubes melt. Vanilla is noticeable as is some drying oak flavor. Those two flavors start to build throughout, almost reaching annoying status.

Basically, this tastes exactly like Bud. Watery and bland but not as refreshing. I think the carbonation could have been better too. A bit too sweet as well. The 5.5% alcohol isn't really noticeable at all. Not horrible, but neither is Bud. I'd say plain 'ol Bud has the edge but at least these guys are trying.
Posted by Beer Drinker Rob at 9:32 AM