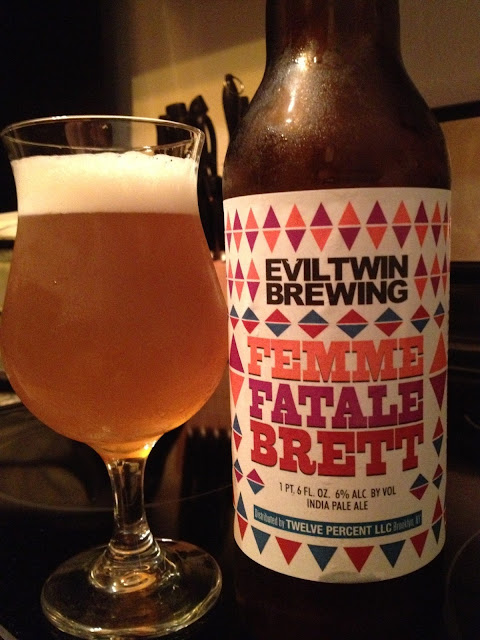 I asked for guest posters a few days ago and came out with a rock star! Patrick from Miami Malt Bomb is one of my favorite beer bloggers. He always offers lots of background information and interesting tidbits with every single review. Apparently he can take nice beer photos too!

I know Rob has a "bomber ban" in effect that he selectively enforces, but for this post, I'm going to flout that and pull out a bomber of Femme Fatale Brett IPA, from the gypsy brewer Evil Twin. I won't get into the whole back story about how the guy behind Evil Twin is actually the brother of Mikkel, of Mikkeller fame. It's just not that interesting. Suffice it to say that Mikkeller's "Evil Twin" flies around the world, brewing at others' breweries - in this case, at Westbrook Brewing Co, out of Mount Pleasant, South Carolina.

Much more interesting about this beer is the fact that it's fermented with 100% Brettanomyces, and roughly in the style of an IPA to boot. Due to the unpredictability and general difficulty in brewing with Brett, much less at 100%, one tends to not find too many commercial examples. The only other such beer I can remember drinking is Russian River's outstanding "Sanctification," but that one is more of a generalized "wild ale," not an IPA.

Generally, when discussing beers fermented with Brettanomyces in any proportion, one tends to mention flavor notes of such appetizing-sounding things like "sweaty saddle," "horse blanket," "funk," and the like. However, that kind of "Brett character" can take a while to develop in the bottle. This yeast, while a voracious chomper of sugar, tends to take its time. As such, young Brett beers (1-6 months) often aren't all that funky. The funk starts coming into its own at around the 6-month mark, and develops from there. With an animal like a Brett IPA, this presents a conundrum. Do I drink as soon as possible, like I would with every other IPA, for maximum hops? Or do I wait for the yeast to do more work? 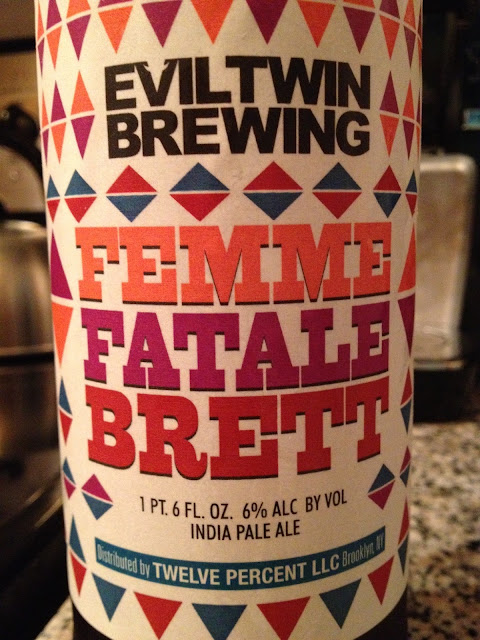 Well, the correct answer is to buy two bottles, one to drink now and one to sock away. Unfortunately, I did not do that - this is my only bottle. I want to get a handle on it semi-fresh at the very least, so I'm drinking now.

Poured into a tulip glass, it's a clear gold, lazy foam with some lacing. The aroma is very nice - while there's a slight sweatiness that hints at Brett, if I didn't know, I might be hard-pressed to pick it out. It's all IPA, and a good IPA at that. Mango, pineapple, Juicy Fruit gum, guava...it's far more tropical fruit-like than piney, which I always love. On the palate, it's not as fruity-sweet as it smells. I get a lot of guava and passion fruit, stripped of their sweetness...and there's some of the typical pine tar bitterness. Largely absent is our friend Brettanomyces. While it does make itself more known in the aroma as the beer warms, I'm not getting too much flavor other than a minor tart pineapple that I frequently find in other Brett beers. I even poured in the yeast dregs at the bottom of the bottle, just to see what would happen to the beer's flavor, and all that did was 1) amplify the bitterness and 2) contribute more of that tart pineapple. The yeast dregs also further enhanced what was already a lush, creamy mouthfeel.

All in all, I think this is an excellent beer. I'm a little disappointed that I didn't get more obvious wild yeast, but I suspected I wouldn't - just didn't wait long enough. Right now, it's a very good IPA with the potential to become something more, as odd as that sounds when considering an IPA's viability beyond a couple months. What that "more" is, I have no idea - only time will tell. 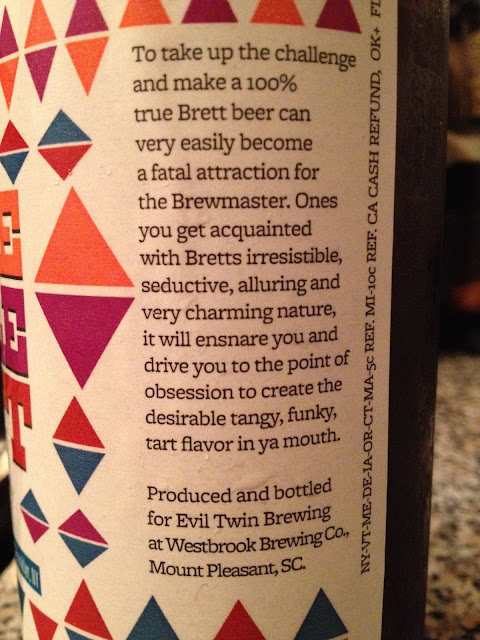 Posted by Beer Drinker Rob at 7:42 AM

Great review! We were just in Charleston and hit up Westbrook Brewing after a trip to COAST. They didn't have the Femme Fatale, but we got to try a couple other Evil Twin brews that they produced at Westbrook's facility. Overall they were pretty solid and I even better didn't have to pay $18 for a six pack like I've the Hipster Ale selling for.

This is a guest post by a local buddy of mine, one of my favorite bloggers. I've actually never had any Evil Twin beers, though there are recently a few that have hit our shelves (call it a pricing decision). One day I'll make the leap.