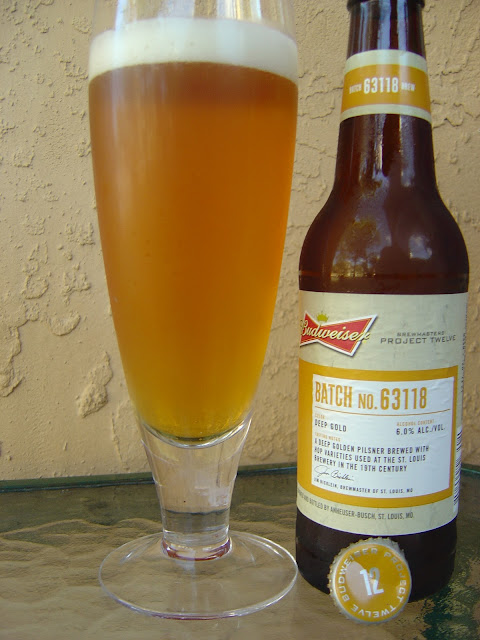 Here we go with the second beer from Budweiser's Project Twelve experiment: Batch No. 63118, a pilsner created by Brewmaster Jim Bicklein of the company's St. Louis, Missouri facility. I checked out their aged Amber Lager a week or so ago. The label notes that what makes this beer special is that it was brewed with hop varieties used during the 19th century. 6.0% alcohol.

Grain, cracker and grassy pungent pils hops aroma. Not strong but noticeable. Grain and wheat flavors start things off. Light lemon with some grassy hoppy balance. Things were going along fairly smoothly until more sweetness right at the finish came along. A bit of a turnoff. The aftertaste lingered with some off cardboard-like flavors, too.

You'd think expert clean-beer-maker Bud would nail a pilsner, but although the beer was crisp and had decent flavors and was well carbonated, I did not like how it finished. Not clean enough and that extra buttery sweetness killed the refreshment aspect. However, it is better than regular Bud. Average!