A few days ago, I threw out an open invitation to do a guest post here, and one of my online acquaintances took me up on it. Geoff did a really nice job introducing himself, Mother Earth Brewery and their Windowpane Peaches beer. So I guess we can forgive the "Duke Basketball" fandom I gleaned from his Twitter profile. Check it out!

If you’ve never heard of Kinston, NC - that’s ok. A little bit off the beaten path in Eastern, NC, Kinston is one of many North Carolina towns experiencing a beer renaissance thanks to Mother Earth Brewing. Mother Earth is more than just a name. Mother Earth Brewery showcases their commitment to green and sustainable brewing as part of their brewery culture.

In 2012, Mother Earth decided to release a limited series called Windowpane. The first, Blackberries (aged in pinot barrels) was a brewery only release. I was fortunate enough when the second in the series, Peaches, was released, to get two bottles.

From the bottle: Second in a series of four North Carolina inspired beers. Double American Wheat fermented with peach, then aged in Chardonnay barrels for three months. 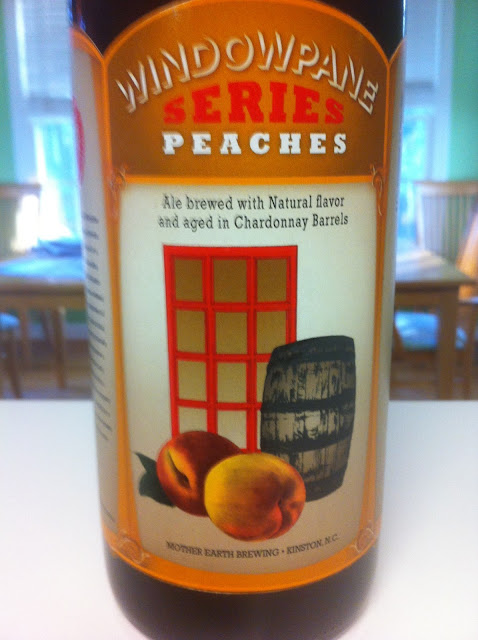 I poured “Peaches” into an Allagash tulip glass. “Peaches” pours a straw (peachy?) gold and is very hazy. The nose is super boozy with a slight hint of unidentifiable fresh fruit.

The first sip is very fruit forward peach. I found the mid palate is very smooth, and mildly bitter with a strong oak and booze finish. A peach schnapps like flavour lingers in between sips. I have had a different peach beer that tastes like bad peach schnapps. I do not care for that particular beer, but the lingering finish works for Windowpane Peaches.

“Peaches” only gets better and smoother as it warms up. In spite of the beer base being a double wheat style (wheat wine instead of barleywine?) there is little to no wheat character to this beer that I could discern. Any lip smacking straw character is well hidden by the peach and oak.

A mild tartness appears on the finish as the beer warms. I‘d contrast the “Peaches” finish with Dogfish Head Festina Peche, whose tart Berliner Weisse character is a summer favorite. “Peaches” tartness is not as sharp as Festina Peche, merely a note among the symphony of flavours of “Peaches”.

“Peaches” would be an outstanding standalone dessert beer. As you can imagine, pairing “Peaches” with any kind of peach cobbler, peach pie or even vanilla ice cream (beer float, anyone?) would make for an excellent end to an evening meal. Given the fall seasonal release, “Peaches” might offset a nice pecan pie also- a thought brought to mind by the excellent holiday beer from Shiner, Shiner Cheer. I also think “Peaches” would go well with brie or any mild, creamy cheese.

Mother Earth beers are limited in distribution to North Carolina and Georgia per their website, http://www.motherearthbrewing.com . I am in no way affiliated with Mother Earth, just a local beer supporter who holds the opinion that Mother Earth is brewing some of the finest beers around.

Thus ends my first guest post beer review- I hope you enjoyed it. I want to thank Beer Drinker Rob of the Daily Beer Review for the opportunity, and close with an amusing story unrelated to my review above of Mother Earth Windowpane Peaches.

Fullsteam Brewery had just opened in downtown Durham, and I was waiting at the bar for a growler of Fullsteam Summer Basil. While I waited, a guy walked up to the bar and ordered a pint of Fullsteam’s El Toro Cream Ale. My memories of Cream Ale are not generally fond and of products like Genessee Cream Ale. I’ve since had Fullsteam El Toro and it is an excellent beer. Out of curiosity, after he had finished about a third of his pint, I asked the guy what he thought of the Fullsteam Cream Ale. The gentleman enthusiastically told me, “It’s really good, I can really taste the cream!”

I froze up a bit, tried not to roll my eyes and laugh out loud. On the drive home, my sides hurt and there were tears in my eyes from laughing so hard. As I have told this story often, the two best comments I have received in kind were: “If Fullsteam had a milk stout, do you think you could have convinced him to try it since it would have less calories than a cream ale?” and “Do you think a guy like that would ever try a beer like Horse Piss Beer?”.

Posted by Beer Drinker Rob at 7:59 AM

Glad to see a good review of a Mother Earth beer. I got their oatmal Porter in a trade yesterday and didn't know what to expect but if it is as good as the peach sounds, I'll need to grab more when I go to NC. I definetely going to keep an eye out for the peach. Cheers!