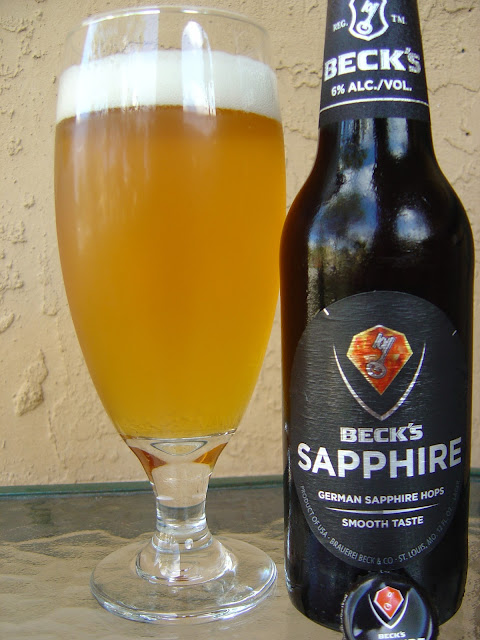 If you launch your beer with a Super Bowl commercial and spend a bajillion dollars to hype it, I will try your beer. Guaranteed. I actually thought the commercial was very good with a sexy black fish serenading the sexy black bottle of beer. At least Becks didn't mess it up and put it in green glass or something stupid like that.

Anyway, this is a German Pilsner style beer made in the German mecca of St. Louis, Missouri. It's brewed with German Sapphire Hops, which the commercial brags about, and it's supposed to be the smoothest Becks yet. "SMOOTH TASTE" says the label!

Now the orginial Becks is a 5% ABV beer, so the 20% higher alcohol (that's 6%) in this mama might catch those drinkers off guard. Even moreso if you're drinking the 4%-ers that Bud puts out. Be careful.

Nice white head. Sweet grainy aroma, light orange. Sweet flavors, grainy, sourdough, sweet orange. Decent body. Definitely creamy and smooth, so they got what they were going for on that aspect. However, I'll be damned if there is a single hop, German Sapphire or not, in this beer.

Overall, the commercial will sell a lot of this beer. It's a little smoother with a little bigger body than some other macros, but the flavors are all the same. And it's much too sweet and NOT refreshing at all. Pass.

Posted by Beer Drinker Rob at 9:34 AM