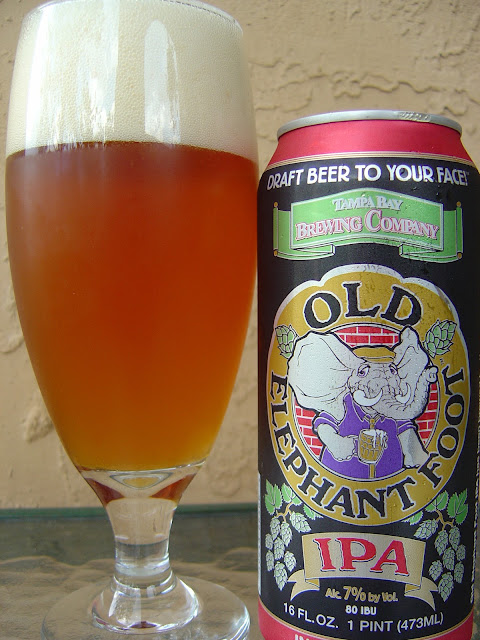 Tampa Bay Brewing Company suddenly has their beers in South (East) Florida! Yep, these guys opened a Tap House in Coral Springs recently. I was unable to attend the opening, but I did manage to get a pounder can of their Old Elephant Foot IPA from a friend of mine. One day I'll actually make it to Coral Springs again and check the place out. I promise!

The can calls this Draft Beer To Your Face! Yep, the can has an old elephant dressed in a purple mumu holding a goblet of beer. On the side of the can, the brewery explains that they've been brewing this since the 90's and that it's been so misunderstood until recently because it was a West Coast IPA here on the east coast. 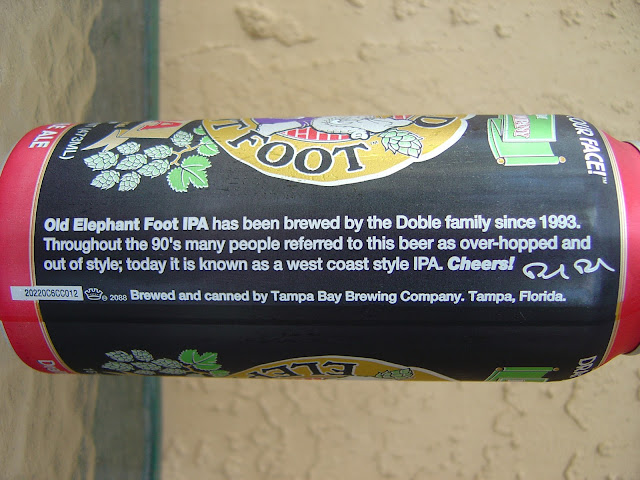 Good head. Lots of floaties and sediment. Sweet citrus aroma and nicely fruity beyond that with apples and apricots. Flavors are WAY more bitter than the aroma let on, and I was shocked despite the 80 IBU warning on the can. Lemon and orange peel citrus dominate. Dryness from the 7% alcohol is apparent right from the beginning. Hints of pine show, but then comes aggressive king grapefruit with more bitterness.

Quite astringent. Add some grassy, alcoholic and lightly metallic notes to have some annoying flavors build toward the end. For the record, the floaties didn't do anything to this beer except perhaps scare off a few customers that didn't like the appearance. The beer was good but with no real balance, and I'd reach to other West Coast IPAs that bring the bitter but still offer balance. For example, Green Flash West Coast IPA. Worthy of a try, especially if you're able to make it to the brewpub. See you there.
Posted by Beer Drinker Rob at 8:13 AM