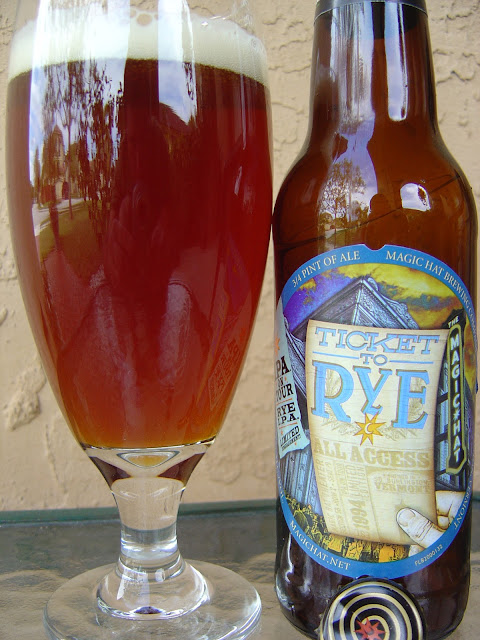 Magic Hat sent me a bottle of Ticket To Rye IPA to check out. This is part of their IPA on Tour series. In the foreground, you see someone holding up an All Access ticket to "The Magic Hat", which is apparently a pretty popular ride/show/something considering the crowd in front of it. Your fortune under the cap: "To thine own self be true--have another brew."

Pine and spicy aroma with a touch of caramel, though no scents were too powerful. Sweet caramel flavors come first but are quickly met with a little lemon citrus and plenty of spicy rye. The rye is very forward and brought out even more by the 7.1% alcohol.

As you keep drinking, the lemony flavors and alcohol start to build and leave a little alcoholic medicinal flavor on the palate. The finish is a bit herbal. Overall, lightly bitter but not too much. Not a bad beer but grab a six pack of Sierra Nevada Ruthless Rye way before taking this home.
Posted by Beer Drinker Rob at 11:03 AM