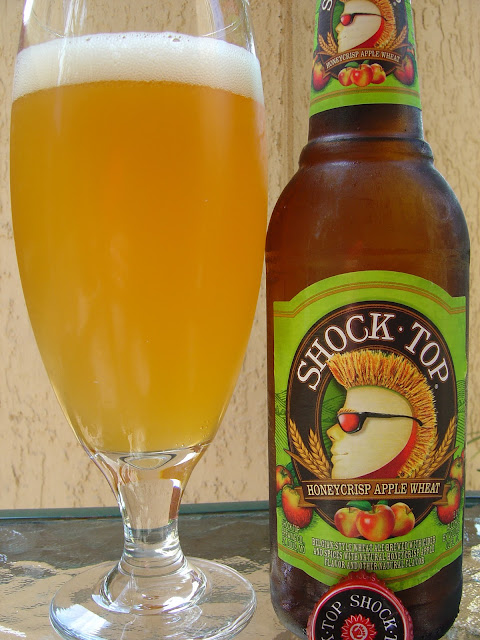 Shock Top Brewing in St. Louis just released another seasonal in their portfolio: Shock Top Honeycrisp Apple Wheat. This is a wheat beer brewed with apple cider and spices. Mohawk dude's head is an apple slice while the mohawk is made from stalks of grain.

Wheat, apples and spices on the aroma, pretty rich and powerful. Flavors are VERY apple cidery from the start, with a strong vinegar pop. The apples are dominant from the start but they seem either overripe or stewed or something, slightly artificial.

Tartness is nice, yet there is still a prevailing candy sweetness. Faint cinnamon and cloves are there, and a wheat texture adds some body. NOT very beer-like at all. More like a gluten inclusive cider. The cider that was added during brewing has full control over this beverage. Some of the 5.2% alcohol seemed to show through as well on a dry, sweet finish. That sweetness actually starts to build, so one was definitely enough. One dimensional on the apple cider aspect, but pretty decent.
Posted by Beer Drinker Rob at 11:12 AM