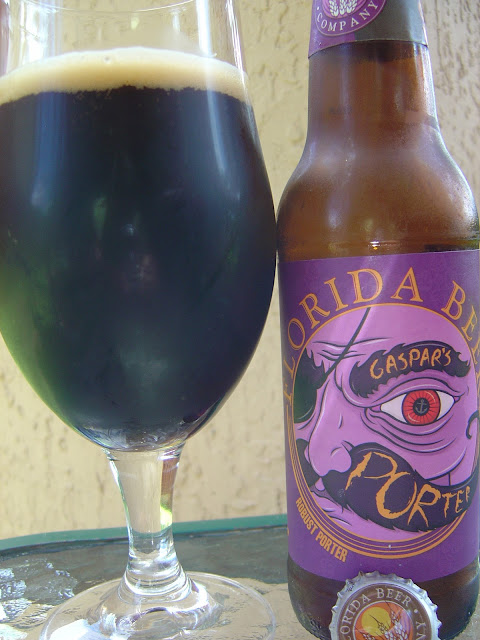 I saw that Florida Beer Company recently released a beer that's been on hold for several years, most recently available as one in their Ybor Gold line. That beer is Gaspar's Porter, brewed with a new recipe and bottled with a cool new label design. The label depicts an angry Gaspar with an eye patch and huge mustache sneering at you. The beer is named for Gaspar, a pirate in the Caribbean that drowned himself with his ship's anchor before being captured.

Nice roasty aroma with some milky sweetness and a hint of smoke. Sweet and roasted malt flavors come together in the beginning. There is also just a little cocoa, but not that strong. Hints of smoke come through as well. However, there is a very prominent and persistent and sharp, weird, tangy flavor that just dominates. And it's not a pleasant flavor, a very unenjoyable aspect. Body and carbonation are medium and fine.

I really like Florida Beer Company and their lineup of beers, so it pains me to hate on this one. But this is by far my least favorite of all the rest. Glad I bought some Key West Southernmost Wheat yesterday to follow this up with.

Posted by Beer Drinker Rob at 7:51 AM