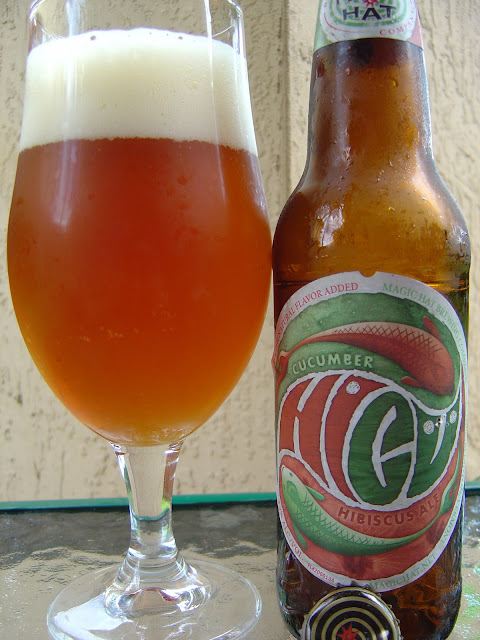 Stepped out onto my front porch this morning to find a dripping wet box. Good thing that wasn't the Monet I just bought or UPS would have some answering to do. Really, why can't they ring the doorbell or at least put my package where it has a chance against Florida monsoons?

Anyway, Magic Hat was the culprit, sending me a few beers including HiCü, a beer brewed with cucumbers and Hibiscus. I would have probably guessed this a gimmick for almost every other brewery, but this is what Magic Hat does, so let's see how it tastes. The art work is pretty cool, with a pair of fish swimming around the name of the beer. 4.2% alcohol.

Smells like cucumber body wash, and the aroma was powerful even outside on a windy day. Flavors are VERY vegetal and full of flower petals. I know I should have known to expect that, but this really tastes like a glass of ground up garden. Kinda blech, not that pleasant. Add some weird and aggressive metallic bitterness along with an ugly tang and bad aftertaste and what you get is a first class example of a drain pour.

This beer arrived just as Magic Hat sued West Sixth Brewing for trademark infringement. If I thought West Sixth had any case at all (like when Monster Energy sued over the Vermonster), I'd have chimed in my support to their social media case. But seriously, West Sixth is going to lose hard and should not waste any more money kidding themselves. I'm no lawyer but obvious is obvious. So, no, I won't stop drinking Magic Hat beers in protest. Well, except this one. West Sixth, I will not drink HiCu to support your cause!

And in case you didn't get the joke of the beer's name, Magic Hat spelled it out for you on the neck of the bottle. 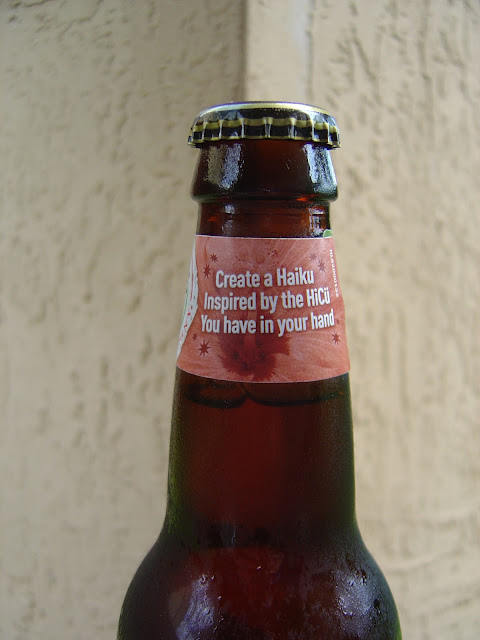