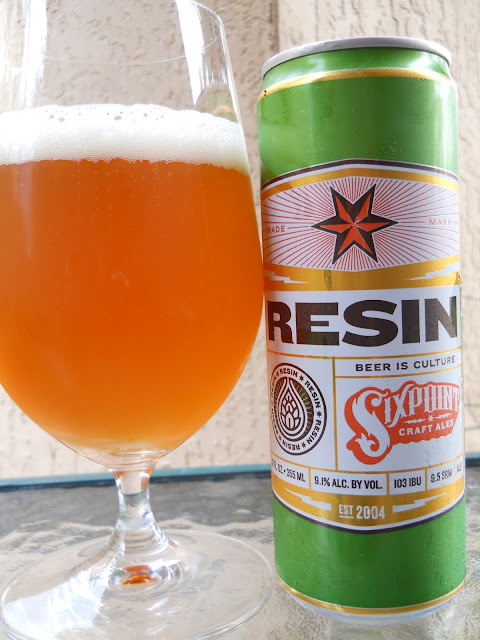 It's Memorial Day and I'm still asleep, so I scheduled this for your early-rising ass!

Sixpoint Brewery from Brooklyn started shipping their cans down here to South Florida recently. It took a Total Wine Grand Opening as an excuse to pick up all the beers they sent. Picture the occasion: brand new store, perfectly and completely stocked shelves, and me shopping for singles in the six-pack aisle because I didn't know what beers were there (Total Wine arranges their singles section by style).

You know what that means right? Yep, broken sixers, or in the case of Sixpoint, opened boxes of 4 packs. Sorry dudes. You'll sell them though. So the beer I chose tonight, Resin, I was a bit disappointed that it wasn't a pounder like the rest of the beers I grabbed. Yeah, whatever, it's a 9.1% Double IPA. OK. I got a beer in a tall and skinny energy drink 12 ounce can. Things got a little contentious when I openly aired my grievances on Twitter!

The can design is pretty industrial, nothing too interesting. Name of beer, brewery, trademark and some beer stats including 103 IBU and 9.5 SRM. On the back in different font sizes/bolds, not sure... "Whatever flames upon the night Man's own resinous heart has fed. Resin is the sticky quintessence of hops that quells the encroaching malt sweetness." OK then!

The aroma is not that strong, but resinous pine is dominant with some light tropical fruit and citrus in the background. Spicy black peppery start with so much chewy (duh) pine resin that George Brett would have a second fit (BTW, that ruling was reversed, if you recall). Big body.

Hints of citrus peel do appear and so does the alcohol, not bad but certainly not disguised. Beg me to say there was some fruitiness and I'll decline. Oily texture, a bit sharp and harsh on the palate. Don't get me wrong, I liked it but it was a one-trick RESIN pony. Whoever named it should be given a beer-naming Emmy. You could say, pass me the resin and the generic would mean the trade name (like Kleenex). Tasty, try it! 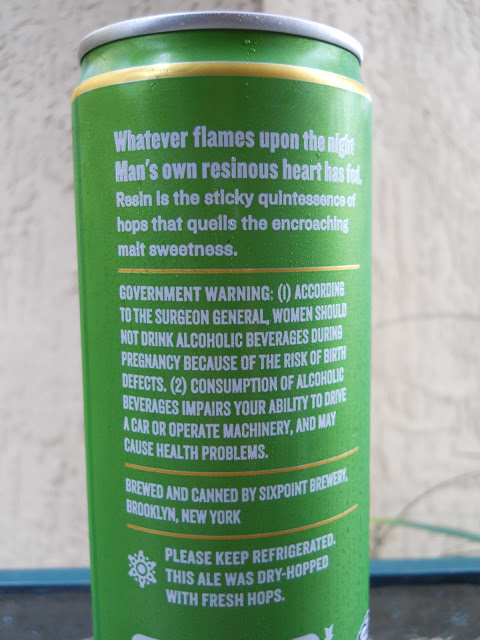 The reason the first sentence in is bold is because it's a quote. If I remember correctly, Sixpoint does that with all their beers. This one is William Butler Years, Two Songs from a Play.

I like Resin a lot, but it's too expensive (for 48oz) and too hop-resiny to make it into my go-to Starting Rotation.

Nice. Thanks for the explanation. I am so under-cultured-Poetry guy, it's poetic!

Yeah, 48 oz here was $13. I can get triple that of Sierra Nevada Pale Ale OR Torpedo for same price. And they are plenty resinous, especially Torpedo.