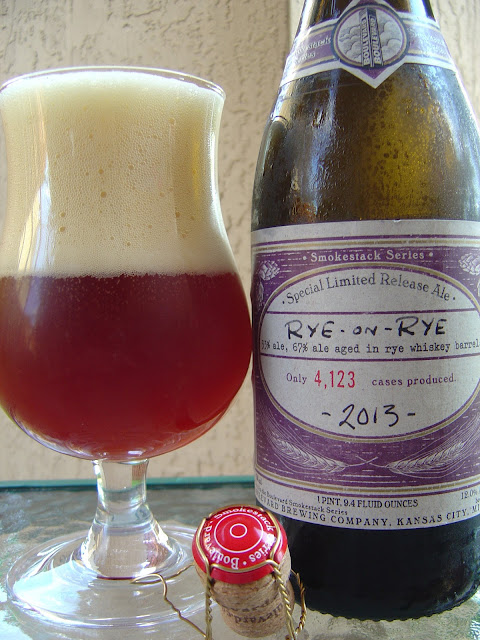 This might be the last Boulevard Brewing beer I have left from my trade with one of their brewers. Oh, except for the one I'm saving for #QuadDay 2013 on December 2nd. Anyway, Rye-on-Rye comes in a corked and caged wine bottle and is a Limited Release Smokestack Series beer, limited to the 4,123 cases produced. My bottle is from Batch 2013-4 and Best By 12-2014. I've also been sitting on it a while since it's a 12.0% beer, but figured my son's 7th birthday was good enough.

There is a story on the back that I'd title "What the Hell," an expression these guys seem to have used when first getting some Templeton Rye barrels and considering aging a rye beer in them. Your expectations are then set with a self-analysis. 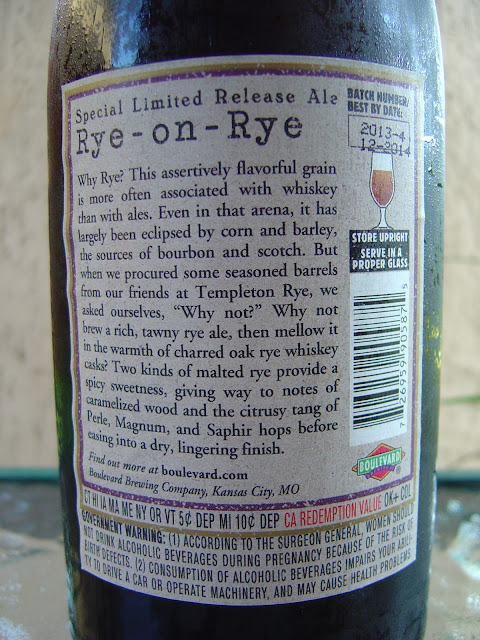 Fine, billowing head! Check out that picture. Whiskey immediately fills your nostrils followed by some sweet caramel and rich toffee. Boozy and barleywinish.

OMG so good! Sweet toffee is prominent in the beginning. Word! (See what I did there? If not, I'll see you in church next Sunday and can explain it then). Anyway, I was expecting Clubber Lang in the way of a whiskey blamo on my palate but instead got nuanced bob-and-weave whiskey finesse. Caramel flavors meet rye spiciness next, and you will taste oak and vanilla after a while too.

Great, creamy texture. More toffee flavors lead into a dry, woody finish. The booze does start to add up by the end of the bottle. I'd recommend sharing if you grab a bottle, a three-way perhaps. Excellent flavors and very enjoyable.

Posted by Beer Drinker Rob at 8:08 AM