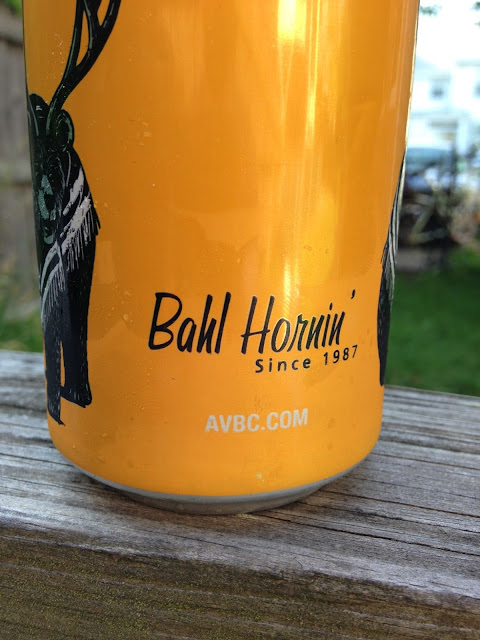 Guess who's back for another guest review. Yep, AntiHero Vinny, who even broke his own beer dieting rules to put this little piece together! When you have a chance, check out Vinny's drinking games column and follow on Twitter to see him exchange little public love notes with his girlfriend.

Uncle Rob sent out the Twitter Beer-signal (which is a lot like the Bat-signal, if Batman was an alcoholic) asking if anyone wanted to do a guest post, and since there's nothing I enjoy more than working for free, I took him up on the opportunity.

Today's beer is Anderson Valley Brewing Company's El Steinber, a dark lager. I'm a huge fan of the Boonville brewery - I drank about a case of their Summer Solstice last summer - so I was very interested. I saw this tallboy 4-pack while on my first Solstice Hunt of the summer. Barkley, the lovable "bear+deer=beer" mascot, adorns the can sporting some sharp threads that puts Beiber swag to shame.

From AVBC: "Borders. We’ve crossed into uncharted territory with our newest release, El Steinber. In our somewhat unusual take on the style, we add Midnight Wheat malt to give this lager its dark brown color and roasted Indio-Hispano blue corn to lighten the body and create a unique, toasty flavor. German pilsner malt and Saaz hops round out this beer producing a crisp, clean finish and smooth drinkability that is perfect for any occasion."

El Steinber pours a very rich and deep, mahogany. It looks opaque until you hold it up to the light to see its true clarity. The head is a pale off white that dissipates quicker than a fart in the wind (majestic prose, right?). El Steiny has a smooth but effervescent (I learned that word from an Alka-Seltzer commercial) mouthfeel. The carbonation keeps it from being "creamy," which is good for the style (I like creamy beers, so I would've been good with a little thicker body).

The malts (Pale Two-Row, German Pilsner, Midnight Wheat, Roasted Blue Corn) balance out the spicy crispness of the hops (Saaz). There is definitely that distinctive Eastern European German/Czech pilsner flavor. The Roasted Blue Corn in the bill adds a nice bit of sweetness, that along with the 5.5% ABV makes Steiny a great beer for a warm Summer siesta (or fiesta).


El Steinber is a solid dark lager that's good for easy hornin', definitely a nice change of pace if I ever get tired of the Solstice (spoiler alert: I won't).

Posted by Beer Drinker Rob at 8:41 AM