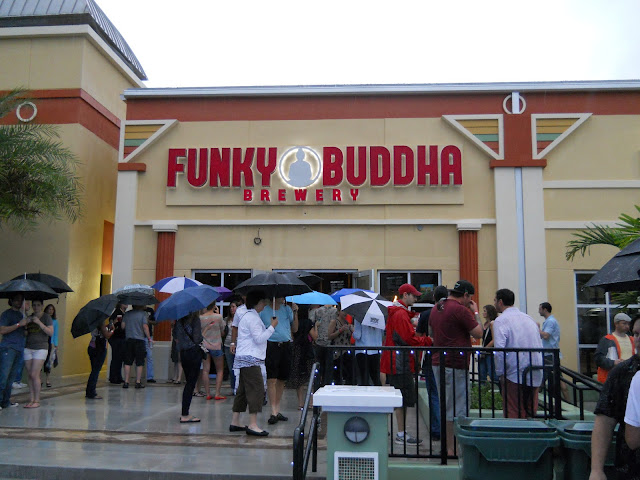 Funky Buddha Brewery opened in Oakland Park, Florida yesterday. For those unaware, that's basically Ft. Lauderdale, and yep, Broward County! My original plan was to arrive at opening around 4 pm so I could see the official ceremonies and ribbon cutting type stuff, but alas, mother nature combined with Little League baseball kept me at the field for 9 hours. I arrived around 6:30 or so to a blocked off road, massive traffic (due to the opening), distant parking and big-ass rain.

Whatever. No umbrella, I walked 8 blocks using the Dixie Highway train tracks and flashing police lights to guide me like a lighthouse in a dark stormy inlet. So yeah, the brewery was mobbed. Outside were three food trucks, a Funky Buddha beer tent, tents selling beer tickets, merchandise and a live band. I got poked at least three times in the face by umbrellas before deciding it might be OK to check out the great indoors, now armed with half a dozen beer tickets.

On the way in, I bumped into the first person I recognized--Bobby Gordash of Holy Mackerel Beer fame. He told me he'd be starting a new gig next week, so watch out for his next adventure. Oh, and he asked me if I had lost some weight. (Thanks for noticing Bobby!) 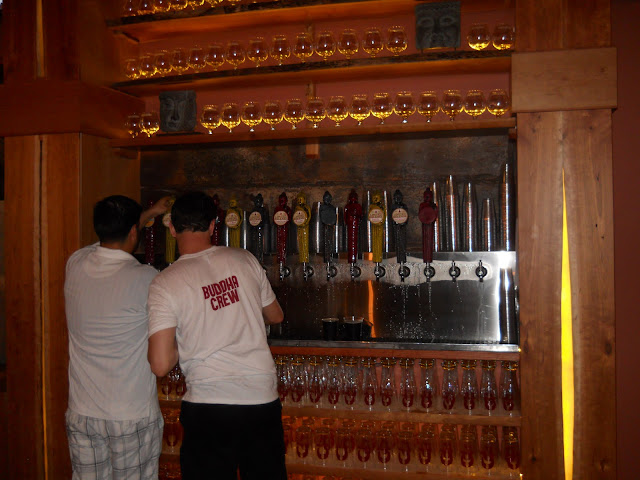 The new Buddha was busy, but not wall-to-wall, elbow-to-elbow, college-dive-bar crowded. You could maneuver no problem. The bar is long and wraps along an entire wall with a few dozen taps. There was an ample amount of employees and volunteers there to pour everyone their beers very quickly, and the ticket system worked perfectly as a time saver.

The taproom was very big with many tables and bar seats. In addition there were outside areas in front and back. From the taproom you could see the brewing space and so many huge tanks for brewing. If any of you have ever been to the old Buddha in Boca Raton and done their "brewery tour", well, this will shock you, the grand growth scale happening here. They now are using a 30-barrel facility, and speaking of tours, they will take place Saturdays and Sundays starting June 15, 2013 at 1 pm, 2 pm, and 3 pm. I would recommend calling (954) 440-0046 or emailing tours@funkybuddhabrewery.com before just showing up so you're not disappointed in any changes.

After checking out the place, I bellied up to the bar, and there were at least half a dozen seats so I plopped my butt down and used my tickets, being sure to save some for the special releases set to happen at 8 pm. I sat there for around 75 minutes and was amazed that every single beer on the tap list was regularly ordered, over hundreds of orders, not a single one neglected.

And it's funny listening to some of the questions customers say to servers. One dude asked how a particular beer tasted, if it was good. Server told him, "all of our beers are shitty!" with sarcasm noted by each as they had a chuckle. Next up, the chick that wanted to know if they had any wine. She was a HEAT fan too, so I wasn't surprised. Anyway, no wine, at least not last night. Finally, a woman clearly overwhelmed by the tap list asked for a recommendation. The back and forth banter was priceless but after she said "girly", the server brought back a Pina Colada Wheat. And she liked it! 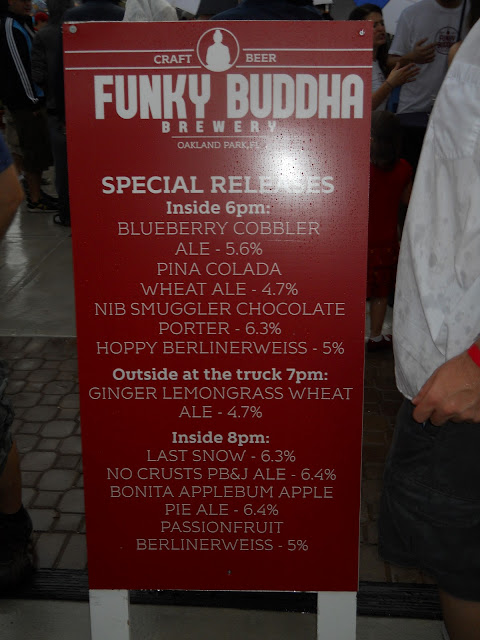 There were special releases scheduled for 6 pm and 8 pm, and some at the later time were some of the brewery's most popular. So my seat at the bar was fortunate as those desperate for a (plastic) glass started to swarm around 7:45. Right at 8, an employee dressed as a banana came out to release the specials and the taps started to flow. By my own account listening to the staff, the first keg of No Crusts PB&J Ale kicked in 18 minutes.

Before giving up my seat to go find Ed Roberts, several trains sped by the back of the brewery. Yeah, this place is right on the tracks! I thought the studio location of ByTheGlassShow.com was close to those tracks in Hollywood, but this was a record. Everyone seemed to think it was cool though, and not annoying, so good on that front. Oh, and I almost forgot to mention the growler station. State of the Art beers in 32 oz and 128 oz (don't bother asking for a 64 oz, and don't ask why either) sizes to go. Was only Hop Gun IPA for the grand opening, but others will be there soon. 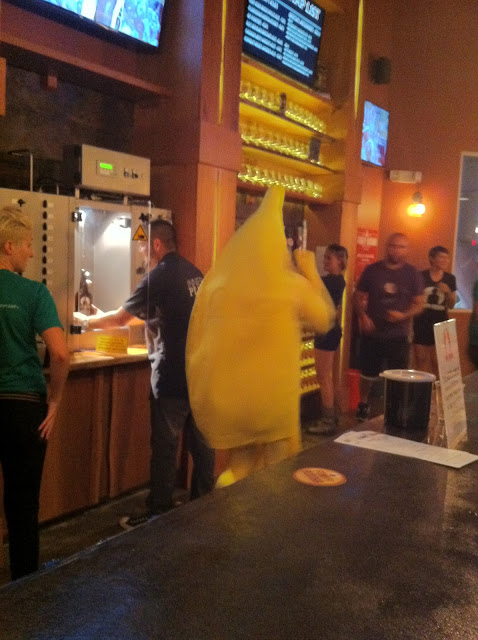 While looking for Ed, I bumped into MikeLovesBeer and spotted Ian from Fresh Beer though he was bolting for somewhere and I didn't get to say hello. Two of Ed's friends were there as well, a beer rookie and local personality Photographer Jarret, who I think is involved with that Crossfit cult. I met some new people and Ed pointed out a few others by name.

I think the Funky Buddha did a great job against a crappy rainy day, handling several thousand patrons (and I heard that they were not expecting nearly that many). The ticket system was great, customer service terrific, the taproom was beautiful and new and welcoming, despite sticking to the floor by the end of the night. I wanted to slip into the actual brewery section, but since there was a police presence outside ready to arrest me, I resisted. The City of Oakland Park (and City Hall is down the road, between the brewery and where I parked-->see pic if you didn't believe that I had to walk) is a lucky community to have this brewery in their city, and Broward County residents should support the Funky Buddha not only because of its locality, but because they brew some of the most awesome beers you can find ANYWHERE! I WILL BE BACK! 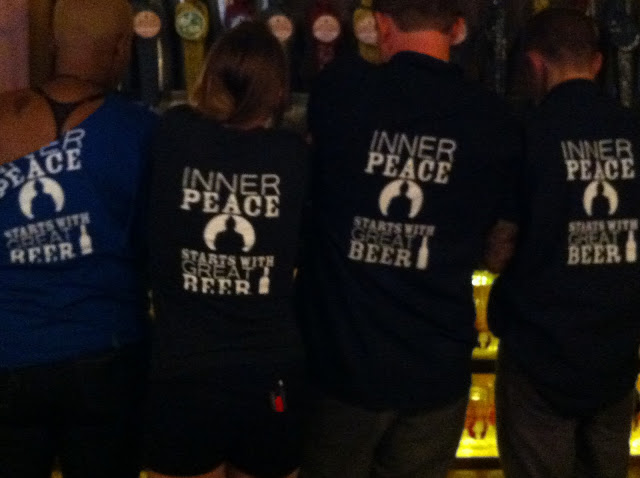 Since I mentioned that I tasted a few beers, here's a rundown with a few notes and impressions. In order...

Blueberry Cobbler Ale: Delicious. Luscious creaminess. Great blueberry flavor and I'll be damned if it doesn't also taste like a cobbler. Seriously, the name of the beer is a huge "duh". So perfect in every way.

Bonita Applebum Apple Pie Ale: Nice flavors of apple and cinnamon, tastes like you're baking an apple pie in your mouth.

Passionfruit Berlinerweiss: BEST OF THE NIGHT! Passionfruit flavors are spectacular and the sour tartness is to die for. Such an awesome and flavorful beer. 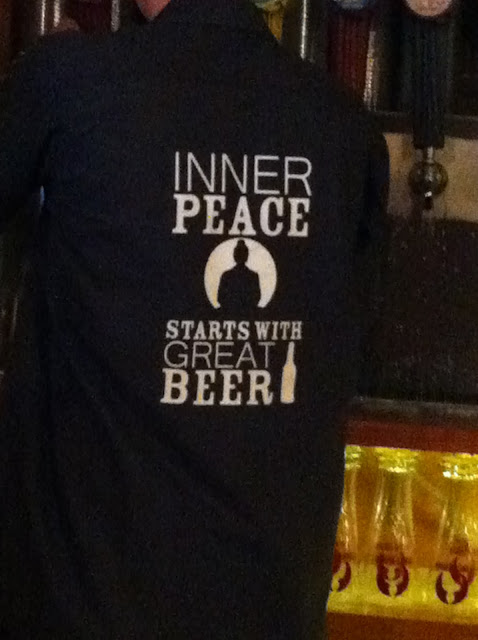 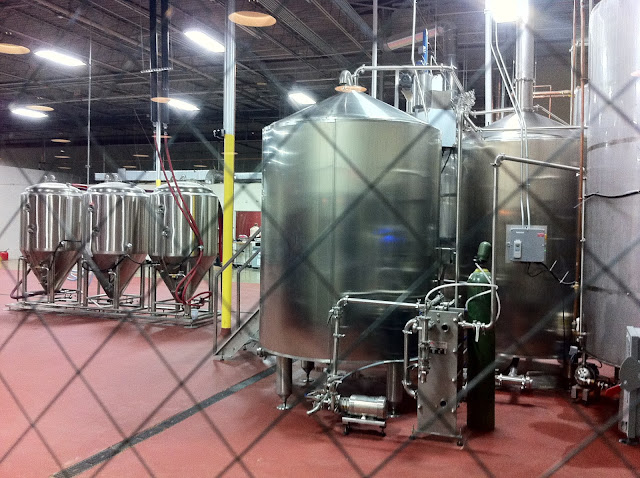 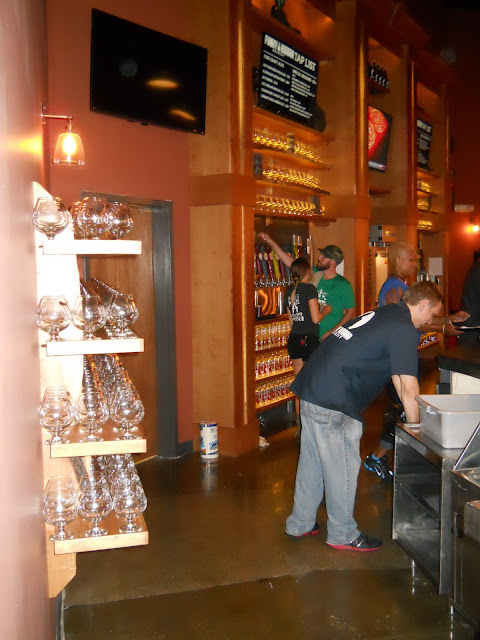 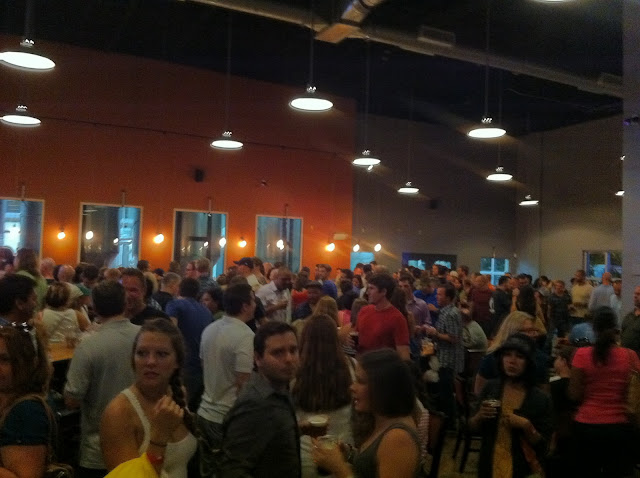 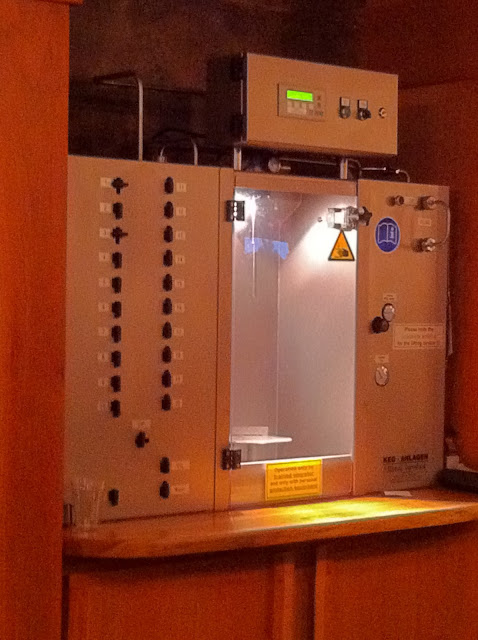 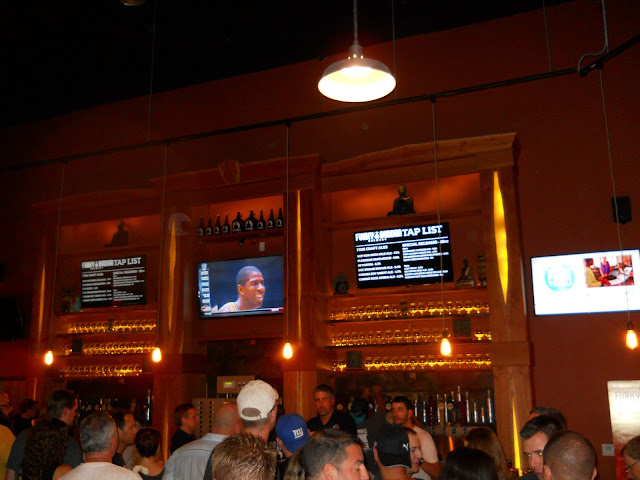 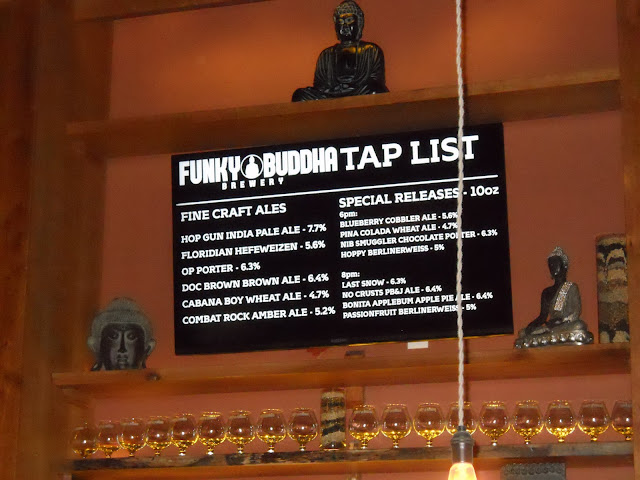 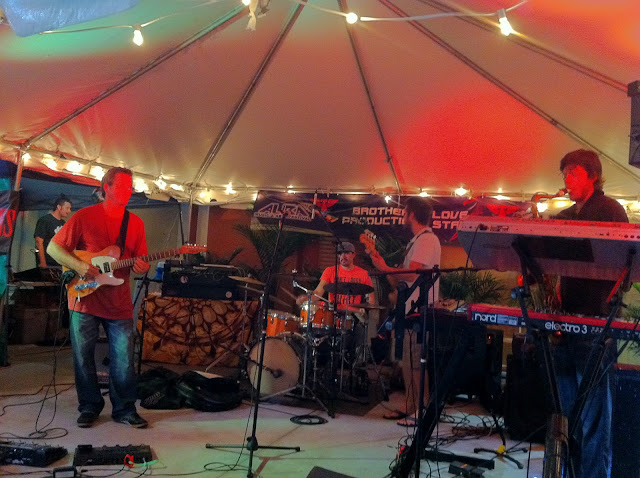 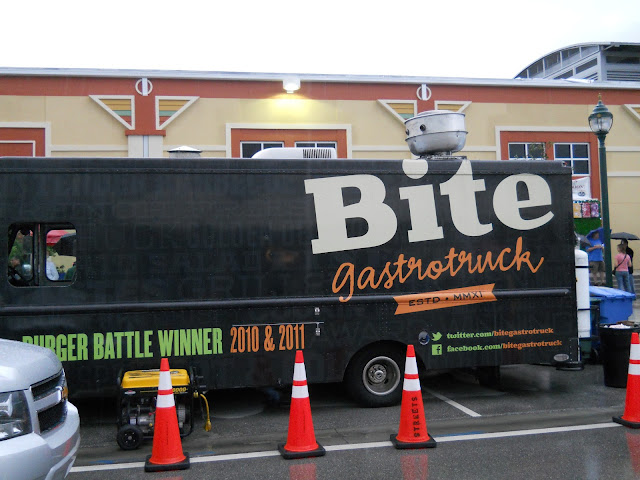 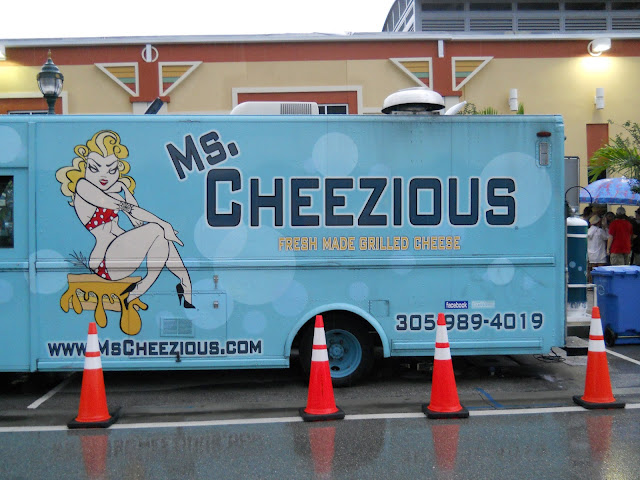 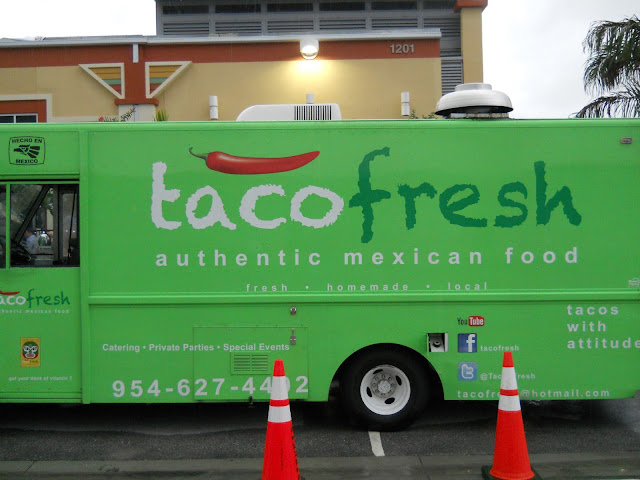 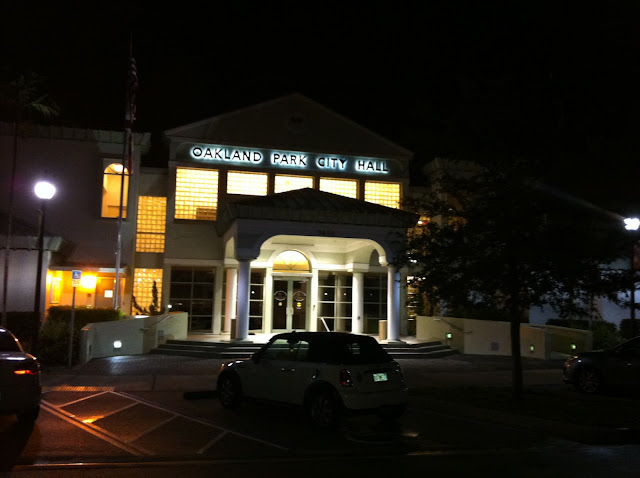 Sorry I missed you at the opening. It's hard to say what I was bolting for but it was a crazy day. Very happy for those guys.

Yeah, next time. Was fun and to say successful is a mega understatement.