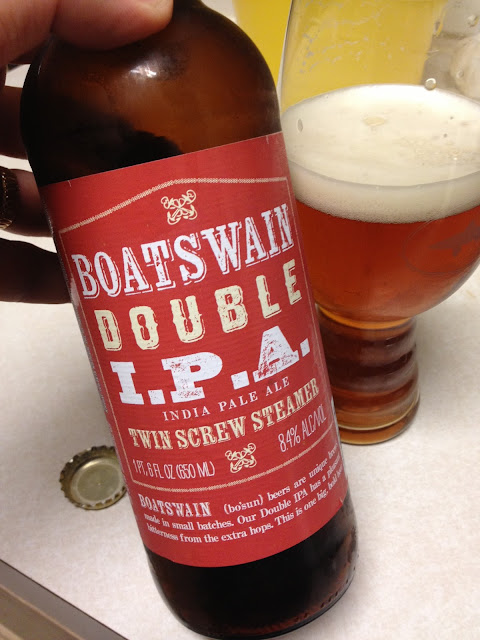 A Boring Double IPA?  Say it isn't so!

It has little aroma, little hop flavor and not a lot of the expected bitter finish.  And this is called a Double IPA?  Maybe I should label it a Midwest IPA...bland, fairly boring, simple, with some rolling hills, corn fields, cows and a new town every 10 miles, each with 5-6 churches and a blinking red (yellow) light.  (I grew up in the Midwest, I can talk about it if I want.)  The Boatswain, Double IPA Twin Screw Steamer, from Rhinelander Brewing Company in Wisconsin is what I'm drinking now (or at least at the time of this writing). Twin Screw Steamer... hmm?

I've only seen beers from this brewery at Trader Joe's stores, first in Charlotte, NC and then at the closest one to us (presently) in Gainesville, FL.  We were in town the other week and Trader Joe's was on the list of activities for the day.  It was an inexpensive bomber, and a double IPA, so I decided to give it a try.

It does have a nice golden color and a persistent white head, thanks in part to the special IPA Glass.  It tastes OK, but just not a lot of pop to it, if you know what I mean. A little bland, and pretty dry overall, at least for the style.  Not a lot of sweetness to it, though I can get a little malty flavor.  Wait a minute!  Is there corn in this?  That could explain it.  After all, it is from corn (and cheese) country...

As it warms, I get a little more character from it.  I'm finding some alcohol solvency. Some additional dry hopping would have done this one some good.  After a swirl in the glass, I can get a little more aroma, a little piney.  And maybe that is a stretch.  Not too much citrus in this one.

Some specifications...  75 IBUs.  This is actually on the low side for a Double (or Imperial) IPA.  According to the BJCP (Beer Judge Certification Program) Guidelines, an Imperial IPA  should have an IBU (International Bittering Units) range from 60 - 120. Not that it really matters too much...but let's continue.  Original Gravity is stated on the label as 17.15, which is clearly a Plato number.  This translates to just over 1.070, which is right at the bottom of the range for the style at 1.070 - 1.090.  Yet, it has 8.4% ABV...which explains it even more.  It is a fairly dry beer.  According to the calculations, the final gravity must be somewhere between 1.008 and 1.009 then...pretty dry.  Where does this fall within the guidelines?  Final Gravity range is at 1.010 - 1.020 for an Imperial IPA.

At least the 8.4% ABV makes it worth the price... I think it was like $3.50 or something.  That may explain the lack of wow factor too.  If it was terrific, there would be a higher demand, and thus a higher price.  Or at least I'd drive back up to Gainesville and buy up the rest from the shelf.

Darren U.
www.dunerbrew.com
Twitter: @galileosbane
Posted by Beer Drinker Rob at 10:43 AM

I'm drinking this right now, even at $2 it isn't worth buying again. I'm drinking it in a SN IPA glass also to give it all the hop aroma help it can get!

The only saving grace is when drank side by side with my mediocre IIPA homebrew (finished too sweet with not enough IBUs), it makes my homebrew taste amazing, bursting with hop aroma and fruit flavors.

So what you're saying is you liked it...

I just tried this last night. I don't understand the bad review. I paid $2.25 for this and it's worth every penny. I was expecting an awful beer, something to the tune of a Bud. I was pleasantly surprised. Good head retention, nice hop bitterness, good aroma. While the hops weren't up to a double. I would give it a solid 1.5. This one as long as it stays consistent will have a place in my brew fridge. Nothing beats it for the price.

It is noticed that a steam gives an effective & gentle way of wrinkles straightening and is effectual in getting the work done faster. best clothes steamer