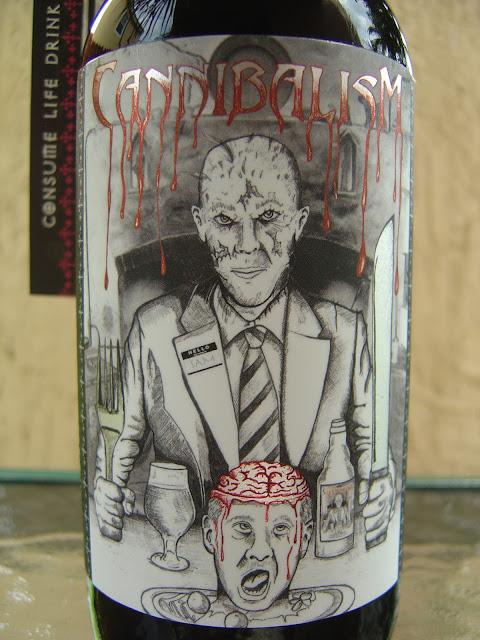 Along with G/I/A/A Imperial Stout, Adroit-Theory Brewing Company sent me their Cannibalism Milk Stout as part of my second "Official Taste Tester" selection. This is the highest end homebrew I've ever seen, from the corked and caged packaging to the label art to the stories to the quality of the beers. Can't wait for them to actually open later this year!

This is the first beer in Trifecta 2, a group of 3 beers with a common theme. You tell me the theme of this trifecta based on their names: Ghost 007 Cannibalism, Ghost 008 The Devil Made Me, and Ghost 009 Harbinger.

Here's the catch with this beer. This beer isn't brewed with water!!! "We chose something else..." I'm playing along and didn't bother asking the brewer what they chose. My best guesses are 1. Beer--they brewed a beer to brew another beer with. This makes sense as well considering the name of the beer. How clever. I hope that's the answer. 2. Blood--it's not water and the guy on the label with the machete and giant fork that just scalped the decapitated head has plenty to work with. 3. Brains--liquified of course. 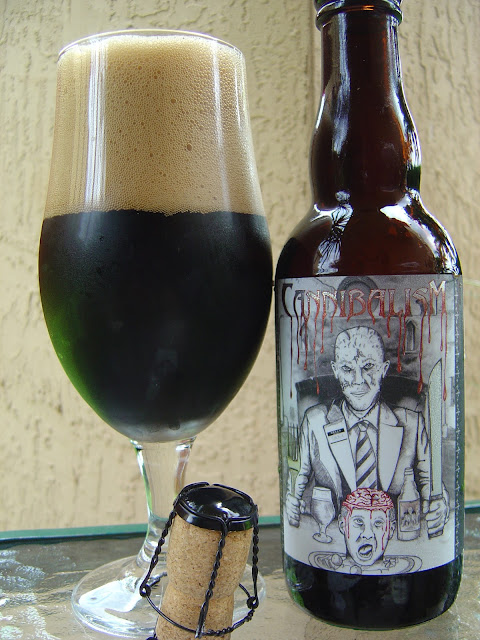 I already mentioned the cool label. The name of the beer is written in blood and is dripping down the label. The cannibal's name is SAM, as you can see from his "Hello, my name is..." sticker on his jacket. To the side, the story about "no water" and some suggested food and cigar pairings.

I poured a little too aggressively and got a huge amount of head that just would not go away. But patience is a virtue, so I waited. Sweet chocolate and caramel with distinct hazelnut aroma, like you might find in a luscious coffee creamer.

The flavors are very similar, still sweet too, though chocolate is not nearly as prominent. Roasted coffee and licorice join the very unique hazelnut flavors to make a really nice basket of flavors. Sweet, but enough roast and hops to tone it down. By the end, the coffee flavors really start to build. You know the 7% alcohol is there but you can't really taste it, perfection there. Overall, very enjoyable, start to finish, and like I said earlier, I can't wait for the brewery to open their doors. 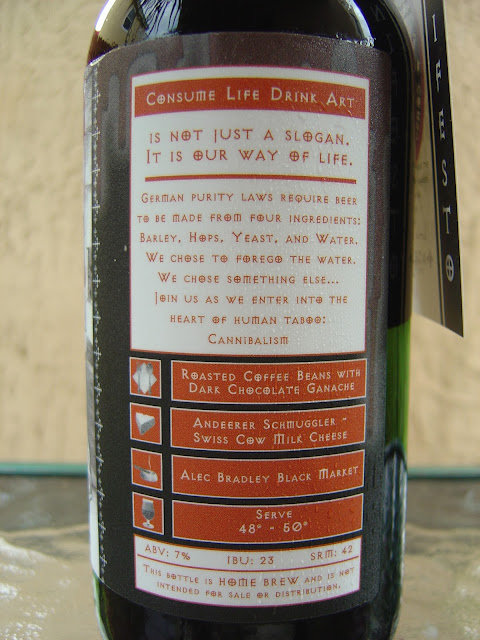 Posted by Beer Drinker Rob at 8:53 AM