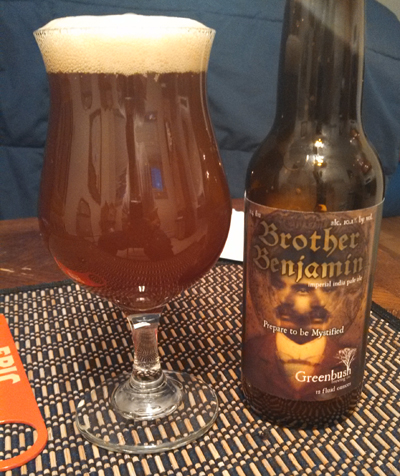 I think beer is as much about the journey as the beverage itself. That journey could be while getting the beer, drinking the beer or after the beer is gone. Everyone’s experience is subjective and that’s part of the fun; no one’s journey is the same.

The journey of this Brother Benjamin from Greenbrush Brewing Co. started in South East Michigan and ended in my stomach in Colorado. I popped the top and poured a deep amber ale. The kitchen immediately smelled of hops, and I sat down ready to document the final moments of this “Mystifying” IIPA. The following is a lightly edited stream of consciousness during my enjoyment of this monster.

Quesadillas beforehand was a poor choice. The first few sips are rocket fuel and no palate cleansers. Now my taste buds are settled down and it has an awesome malt kick with a touch sweetness. Hop flavor is resiny? That’s a thing, right?

The malt sweetness expertly balances what would be a ridiculous bitterness. 114 IBUS and 10.1% abv. Slight boozy burn in finish. For the record, I'm into it. This will probably age out into a damn fine barleywine. Booze is starting to agitate me. Maybe take a gulp instead of sips? Nope that didn't help. Now my quesadillas are agitated. I wish I could drink like a man.

What the hell is up with the story on the label? Who is brother Benjamin and why did he mystify people? Benjamin Button was shit so I don’t trust any Benjamin’s anymore, period. If Brad Pitt ages backward, does that make Kate Blanchet a pedo in the end? Can you say “Worlds best ‘To Catch a Predator’" episode? 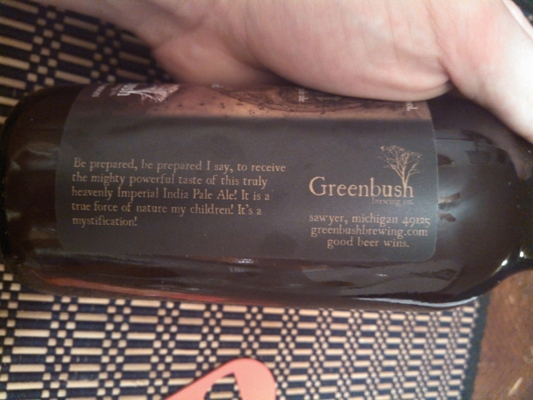 The beer is warming up and the booze is starting to fade. Actually got some fruit-esque notes on that last pull. Getting slightly smoother as it warms.

Barely halfway through and my head's floating. Noticed there's two faces on ‘ol Benjamin. I really should use Google more. I bet it has all of this guy’s secrets and explains why Greenbrush gave the beer its name. Shit, I could've just cleansed my palate with water after the quesadillas instead of tasting pure gasoline at the start.

The booze is back. Maybe it’s from blowing my nose five times? Is there a BJCP note for beer clearing sinuses? I motion to add. HOLY SHIT! IF YOU DRINK THIS LIKE WHISKEY AND EXHALE BEFORE SWALLOWING YOU ONLY GET oh nope the booze is still there. Oh well, I accept it and appreciate it. 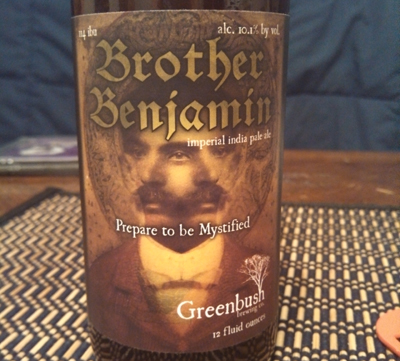 Broke down and Googled "Brother Benjamin" and am immediately regretting this decision. The only links provide useless crap without a good explanation of a mystifying character in the woods. This stuff is a fucking 97 on Ratebeer?? Had no idea. +1 bragging rights, right?

Here goes the last of it. Trying to find a bottled date. I feel like this one's slightly aged based on the faded hop aroma and flavor. That doesn't explain how it smelled so potent when I poured. Stroke? Won't rule it out.

Final thoughts: I loved it but I'd like to try a fresh one. I think Benjamin should have contained more hop aroma and flavor, but then again I didn’t read whether it actually had that profile to begin with and their label is kind of useless. Solid work, Greenbrush. I’m looking forward to my next!