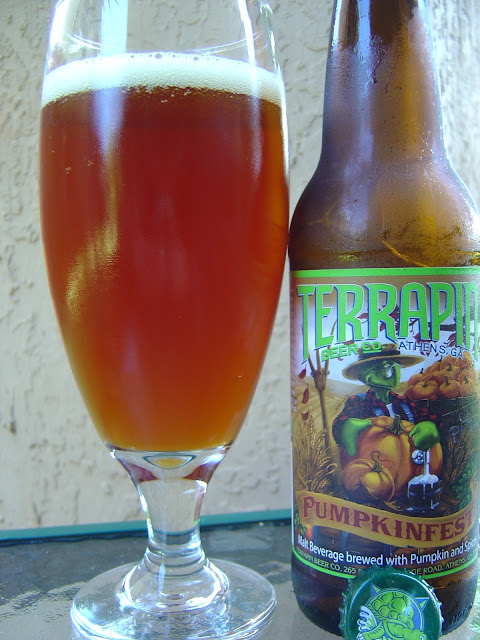 If any of you ever pay attention to anything I say, you've probably heard me bitch about hating Fall beers and even taking that to an all-out Pumpkin Beer boycott recommendation. I probably haven't had a pumpkin beer in 2 or 3 years. So I'm not sure what grabbed my attention with Terrapin's Pumpkinfest. Probably the name, which if you read the little story on the side, tells you this is a pumpkin and Oktoberfest hybrid of sorts. Yes, Terrapin says they are "CARVING OUT A FALL TRADITION" with this new combo lager.

As usual, the artwork is fun and goes along with that story. Grandpa Terrapin is out in the pumpkin patch seemingly tapping a pumpkin and simultaneously brewing Oktoberfest. This is their 2013 Fall Seasonal. In August, yeah. Very annoying, but whatever, there isn't any fall here in Miami anyway!

Very nutmeggy aroma with some cinnamon. Keep smelling, you'll get to the pumpkin, but just a little. The pumpkin flavors are a bit deeper and richer than the aroma lets on. Make no mistake that this is more than adequately spiced with cinnamon and nutmeg, but this is solid.

Brown sugar sweetness and a little herbal sweetness too, yet this still has a little hoppy bitter answer for that. Carbonation good. Body medium. I liked the marriage of styles because I think that totally took the edge off a mostly annoying pumpkin-and-spice style mess and amped up a mostly boring-as-hell Oktoberfest style. Nice job, Terrapin. 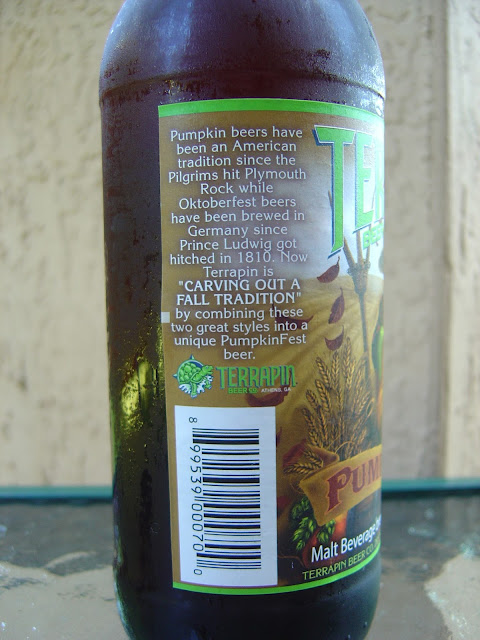