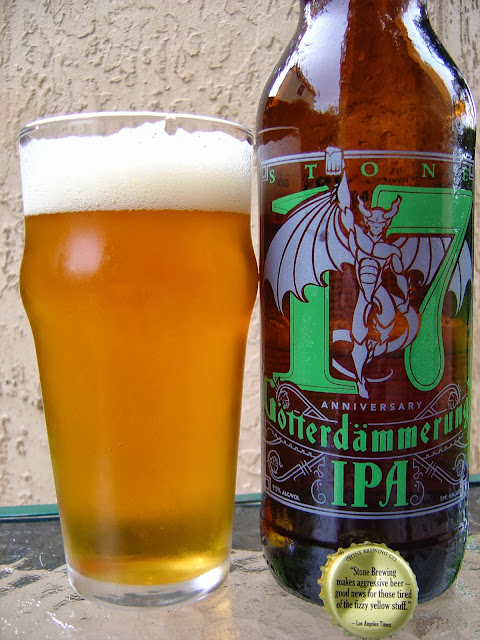 I'm a pretty big fan of Stone Brewing, like Götterdämmerung Big! So I bit the bullet and bought a bomber of their 17th Anniversary Götterdämmerung IPA, a 9.5% Double IPA brewed with pilsner malts and a basket of crazy German hops you've never heard of: Herkules, Hersbrucker, Magnum, Merkur, Opal, Smaragd & Strisselspalt. You can read that as part of their story below as well.

That story, found on the back of the bottle in micro-type, talks about Stone's accomplishments over the past year. This is an August 2013 release and I was reminded to Drink Fresh. 22 ouncer. 9.5% alcohol.

Sweet fruity aroma, lots of orange and a little pineapple. Hmmm. Really hoppy but totally unique and different hoppy. Tropical peaches very strong, very juicy. There is also plenty of sweet orange. Spicier pine and citrus grapefruit rinds are also present. This beer has a big hops basket and many are popping out terrific individual flavors.

Fruity, sweet and bitter simultaneously, fresh, nice spicy bite and an alcohol finish. Nice tangy feel throughout. I dig this kind of experiment, much moreso than those that might use/add weird extra ingredients, like crazy fruits, yeasts from body parts or unknown African adjuncts. 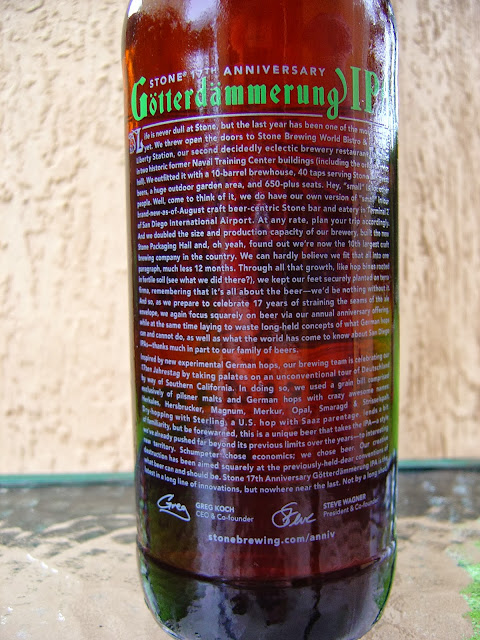 
Life is never dull at Stone, but the last year has been one of the most eventful yet. We threw open the doors to Stone Brewing World Bistro & Gardens – Liberty Station, our second decidedly eclectic brewery restaurant, installed in historic former Naval Training Center buildings (including their original mess hall). We outfitted it with a 10-barrel brewhouse, 40 taps serving Stone and guest beers, a huge outdoor garden area, and 650-plus seats. Hey, “small” is for other people. Well, come to think of it, we do have our own version of “small” in our brand-new-as-of-August craft beer-centric Stone bar and eatery in Terminal 2 of San Diego International Airport. At any rate, plan your trip accordingly. And we doubled the size and production capacity of our brewery, built the new Stone Packaging Hall and, oh yeah, found out we’re now the 10th largest craft brewing company in the country. We can hardly believe we fit that all into one paragraph, much less 12 months. Through all that growth, like hop bines rooted in fertile soil (see what we did there?), we kept our feet securely planted on terra firma, remembering that it’s all about the beer—we’d be nothing without it. And so, as we prepare to celebrate 17 years of straining the seams of the ale envelope, we again focus squarely on beer via our annual anniversary offering, while at the same time laying to waste long-held concepts of what German hops can and cannot do, as well as what the world has come to know about San Diego IPAs—thanks much in part to our family of beers.

Inspired by new experimental German hops, our brewing team is celebrating our 17ten Jahrestag by taking palates on an unconventional tour of Deutschland by way of Southern California. In doing so, we used a grain bill comprised exclusively of pilsner malts and German hops with crazy awesome names: Herkules, Hersbrucker, Magnum, Merkur, Opal, Smaragd & Strisselspalt. Dry-hopping with Sterling, a U.S. hop with Saaz parentage, lends a bit of familiarity, but be forewarned, this is a unique beer that takes the IPA—a style we’ve already pushed far beyond its previous limits over the years—to interesting new territory. Schumpeter chose economics; we chose beer. Our creative destruction has been aimed squarely at the previously-held-dear conventions of what beer can and should be. Stone 17th Anniversary Götterdämmerung IPA is the latest in a long line of innovations, but nowhere near the last. Not by a long shot.