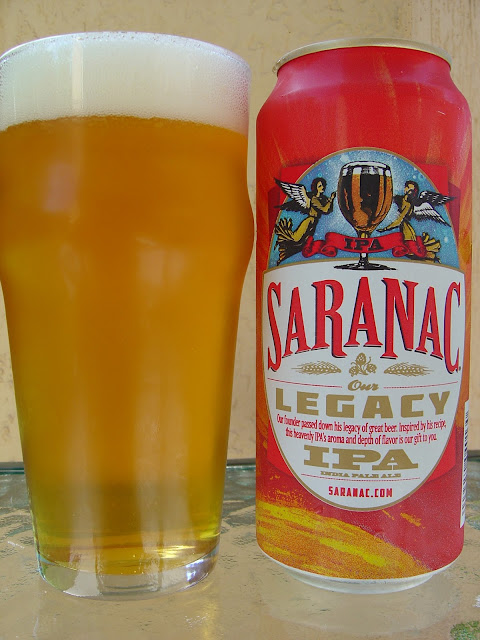 Saranac beers brewed by Matt Brewing Company in Utica, New York have a special place in my heart. I went to college at Cornell in upstate New York, and those Saranac beers were some of the first beers I tasted that stood out against all the crappy lagers so readily available. After graduation in 1994, I continued to drink Saranac regularly.

I haven't had so much lately, though. In fact, I'm not even sure they still distribute to South Florida. However, I still receive their press releases and recently read about their Legacy IPA, brewed in celebration of their 125 year anniversary. They used founder FX Matt's IPA recipe and added some modern techniques, while also using hops dating back to 1888 and blending with those used in American IPAs today.

I asked the brewery if they'd send me a sample or two, and the rest is history. The beer comes in pounder cans with a simple angel and beer glass decoration. 60 IBUs. 6.5% alcohol.

The alcohol shows through toward the finish with a little dryness. Leans nicely bitter. Balanced. Excellent flavors. Terrific!
Posted by Beer Drinker Rob at 9:08 AM