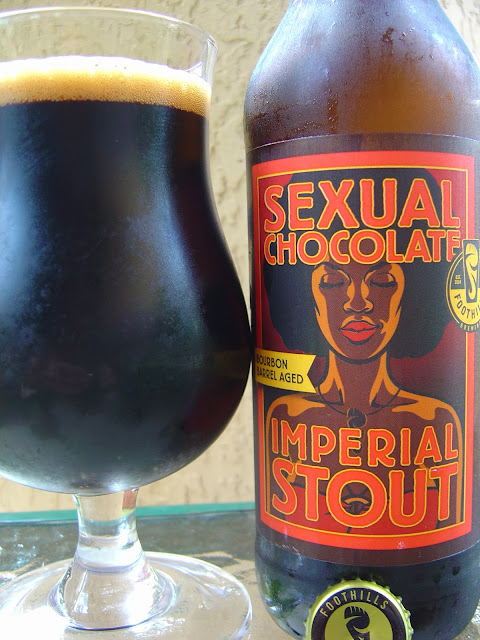 Several months ago I traded away one of my bottles of Westvleteren XII to an online friend of mine that was interested in trying it. We didn't even discuss what the return box would contain; that's just how I roll! We both knew it would be something unique and cool. So a month or so later, I was told that he'd be pursuing the Special Release of this year's version of Foothills Brewing's Bourbon Barrel Aged Sexual Chocolate Imperial Stout. Bingo!

I have heard great things about the regular version of this beer, so getting a special variation sounded cool. I've had this bomber now for over a month. And today just seemed like that right moment to crack it open. The label depicts a woman with her eyes closed and fantasizing, probably about this beer. It's the same label as the normal version with just a small yellow banner telling you it's been Bourbon Barrel Aged.

A story on the side sets your expectations and lets you know this was in the barrels for 4 months. 9.75% alcohol. SRM 70. IBU 85. And now for the fun part of the story: determining the vintage of the beer. You see, someone deliberately took a Sharpie marker and scribbled over the year on the label. When I wiped it away, the label says 2012. But the guy that got it for me said the beer case indicated it was bottled just two days before he got it in early September, 2013. Seems a little lazy for a brewery that is able to do special releases to go that route and reuse out-of-date labels. If it's so limited, just get a small new batch made. Were the stats identical this year too?


Rich chocolate and mocha aroma with hints of sweet bourbon and a good roast. Mmmm. Delicious! Flavors very much mimic the aroma. Rich, creamy chocolate. Excellent silky texture. Those sweet flavors were further highlighted by some bourbon flavors. A noticeable woody dryness is also prevalent. Some roasted flavors and a welcome hoppy bitter balance are also in play. Hints of vanilla and coffee add more interest.

Nice body. Really nice flavors. Not nearly as much bourbon as I imagined there would be, but I certainly appreciate the restraint. Finish is woody dry with a little heat lingering in the throat. I wouldn't throw this one out of my bed! 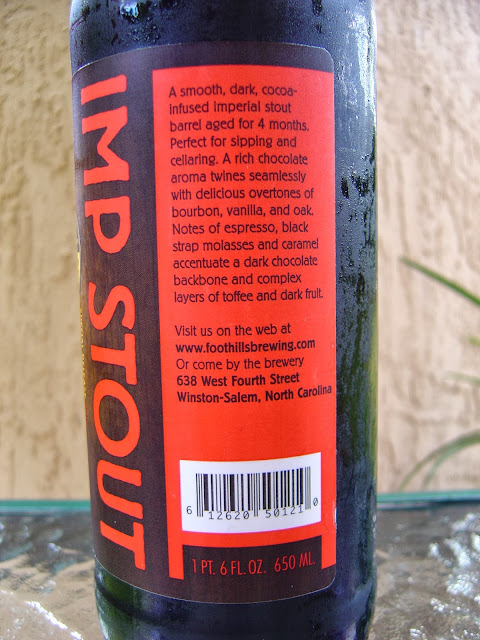 Posted by Beer Drinker Rob at 8:34 AM