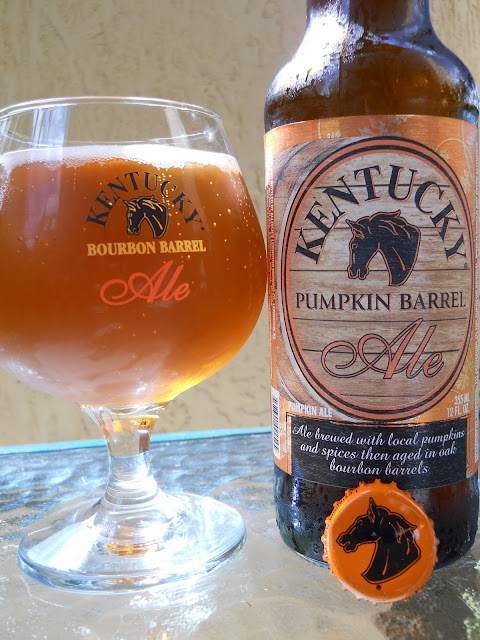 You all know how I feel about Bombers and Pumpkin beers right? Two of my favorite pet topics! I already had my one pumpkin beer of the year back in August, so I thought I was done for the year. But nope, that dude Josh from LostInTheBeerAisle crowned Kentucky Pumpkin Barrel Ale his new favorite, which made me cave in to investigate one more.

Aroma is full of spice with nutmeg dominating. Orange flavors meet sweet bourbon first sip. Vanilla also really pops here. Holy heavy-hand with the baking spices though--obnoxious. The 10.0% alcohol was noticeable with some heat in the chest but very well incorporated in a dangerous way. Bourbon characteristics dominate and the beer is just a bit too sweet.

Now, it's hard to add this beer as an example of why I hate pumpkin beers since there was absolutely zero pumpkin flavor in this beer whatsoever, but since Alltech Lexington Brewing is calling this a pumpkin beer, the massive spice overload is just a reason to hate all day. Since they told me it was brewed with local pumpkins, I'll go out on a limb and say I got one tiny hint of pumpkin as I drank a last sip almost at room temperature, but that doesn't make it a pumpkin beer.

As for LIBA's review, I agree with absolutely everything, except that part about tasting pumpkin. And for those same reasons of LIBA love, I hate this beer entirely. I'm hoping we can still be friends despite our differences. #BanPumpkinBeers
Posted by Beer Drinker Rob at 8:27 AM