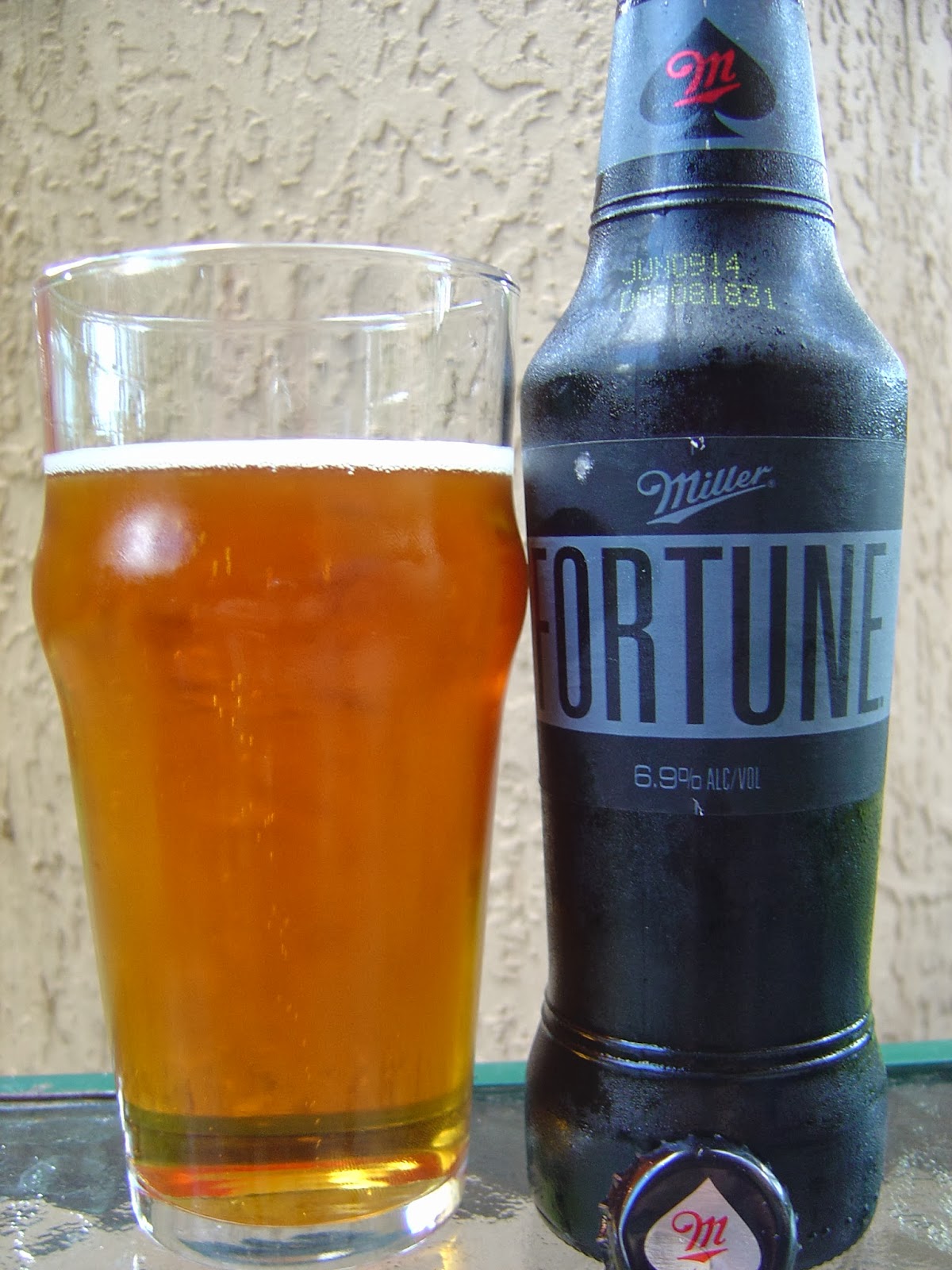 Saw a full aisle of Miller Fortune at the liquor store today and couldn't resist. I know how much you guys appreciate me taking a bullet for the team. Looking at the bottle, I had no idea what this beer was. The label simply says its name is Fortune, with the alcohol content prominently displayed at 6.9%. And of course a lucky spade with the Miller "m" in it. The bottle has an interesting contoured shape as well.

Before I opened it up, I got word that this is supposedly bourbon-barrel aged, which was unexpected. Grainy, toasty and sweet aroma. OMG NO! Sickly sweet grain and diluted bourbon. Along with a light toasted flavor, that's about it. Gag! Terrible! The rough carbonation brings out the worst of it too! Yes, of course I dumped it.

Confucius say your Fortune is... don't drink this crap! Prediction: off the market by the end of May. These guys should really stick to making crappy mass produced lagers and pursue the industry trend of acquiring real craft brewers.

Update 2/23/14: Although I clearly stated that "I got word" and used such strong words as "supposedly" when mentioning bourbon barrels, in addition to basically admitting zero research in the comments, alas I don't want to mislead you guys. This wasn't bourbon-barrel aged, not aged on bourbon-soaked wooden staves, no bourbon flavors added. Here's a story for the curious, though this paragraph from the article basically sums things up:


There has been a minor hitch in the introduction: After an article in Bloomberg Businessweek described Miller Fortune as having “a malty, complex flavor hinting at bourbon,” some follow-up articles portrayed it as bourbon-flavored. In an email to reporters, MillerCoors public relations executives wrote, “Miller Fortune is not bourbon-like or a bourbon-flavored beer.”
Mr. England joked: “If you’re going to plagiarize, do so accurately. Copy, paste.”
To which I respond... Those MillerCoors PR peeps obviously didn't try the beer. It has a classic corny sweet flavor (can you say Bourbon?), though in an ultra-sweet diluted kind of disgusting way. If they prefer another way I described it on Twitter better, then more power to them: "sweet corn with undisguised alcy backbone through it." The end. Don't force yourself to try it.

haha, yeah. I probably should have done half a minute of research.

not bourbon flavor added either. you should've done a whole minute of research

Maybe so, but I stand by the assessment of "Sickly sweet grain and diluted bourbon" flavors. I drink plenty of Bourbon and this beer had that type flavor, though mega thin!