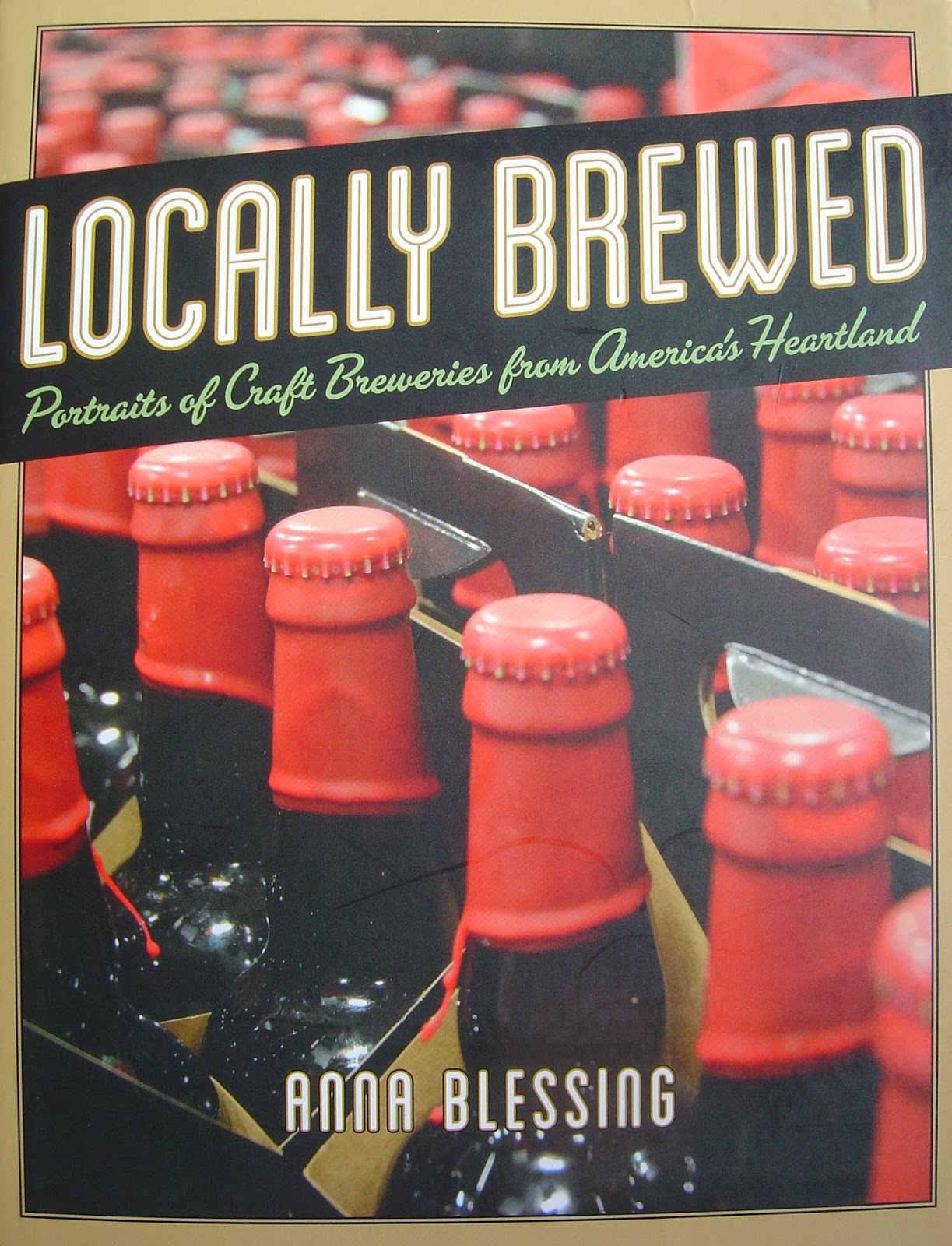 Last year I published an interview with Modern Mixologist Tony Abou-Ganim on the Total Wine Blog. In preparation for my interview, I was provided a copy of Tony's book Vodka Distilled from Agate Publishing. Agate contacted me again a few months ago (I'm a slow reader, LOL) when they published the new book Locally Brewed: Portraits of Craft Breweries from America's Heartland by Anna Blessing. Despite being from Florida, I am very interested in the beer scene from the Midwest. Lots of great beers and breweries!

In Locally Brewed, Blessing profiles 20 Midwestern breweries with extensive interviews, pictures (she is also the photographer for the book), brewery label artwork, and inside stories/fun facts one could only obtain by visiting and speaking with the people that run the brewery. In fact, Blessing states that this is a book about the people behind the beer more than a book about beer. Before you are even to the first brewery profile, she suggests a Midwest pilgrimage to explore what the region has to offer firsthand. (P.S. See you in September).

The book is organized chronologically by age of the breweries, starting with August Schell Brewing and finishing with Moody Tongue Brewing. Some of the brewers distribute everywhere, some only locally. Some brands have national recognition, some I never heard of before opening this book. But it's clear that the Midwest has a vibrant brewing culture that supports the "local" mantra that is making such a comeback.

I also LOVE that August Schell is the first craft brewer profiled, perhaps the reason chronological order was the chosen organization? When I saw that, I wasn't sure if Blessing would address the 2012 Brewers Association's "Craft v. Crafty" debacle, or at least to what extent. According to the Brewers Association, Schell isn't a craft brewery (BS in my opinion). Blessing did an excellent job explaining the situation, what transpired, and offering both sides of the debate in an incredibly statesmanlike way (and way better than I edited down this paragraph). "Craft v Crafty" rightfully took a lot of crap, and you can read the full response from Schell's Jace Marti and see the original article there.

Back to the book. Blessing included some unique aspects while profiling these 20 different breweries. Where else are you going to find the musical playlists for the brewers? She concluded that there is an intricate passion between music and brewing beer. (P.S. Stay away from Schell's playlist, LOL). The book also includes the "Get A Pint" section for each brewery, showing what watering holes you can check out when you're in town and want to try a new beer or two from a particular brewery. And for many breweries, label art is a must (I love those breweries.) Blessing shows what 5 Rabbit Cerveceria, Three Floyds and Jolly Pumpkin can do to grab your attention. Finally, I like that the distribution of each brewery is touched upon--sometimes finding out that information is really not that easy.

In the end, several of my favorite brewers were profiled with really fun and interesting stories: Bell's Brewery, Founders Brewing and Jolly Pumpkin Artisan Ales. Some I've tried a beer or two but would like to become better acquainted: Three Floyds, Surly and New Glarus. And maybe I'll make my Minnesota trip last a little longer later this year to see what others I can get to.

I really enjoyed the book, the photographs, the stories and the extras that were unexpected. Grab a copy when you can.

Posted by Beer Drinker Rob at 9:31 AM