Canned! Artwork of the Modern American Beer Can

I've done a dozen or more book reviews here on DailyBeerReview.com, but I was most excited about recently being asked to check out Canned! Artwork of the Modern American Beer Can by Russ Phillips. The author of this book started a website called CraftCans.com and it took him all the way from "beer itself is art" to "beer also inspires art." And I am totally a beer art fanatic! My favorites are Ralph Steadman, Tara McPherson, and Marq Spusta, though I have many others I admire. And this is about Craft Beer Can Art and Design, so let's explore this book.

Russ's book starts with a Foreward by Craft Can pioneer Dale Katechis from Oskar Blues Brewery. This is the guy with the balls to get a canning system to use at his own brewery for his own beers, and 300 million cans later... Others had used some of the big (non-craft-big-boy-evil-not-micro-either-corporate-monster) brewers to help them can their beers offsite, but Dale was Dale, and I think the book quotes him as drinking that day in 2002 when the decision was made to do it in-house.

This book is so awesome! Let me say it again. This book is so awesome! I look at beer labels and cans practically every day, yet the illustrator and photographer and designer for most of the pieces I've seen are almost completely anonymous. And that, for me, is horseshit! You can't even go online and find this info easily. Yeah, you can find some assholes bashing a beer's color or flavors and giving their opinions but Beer Art Opinions and Facts like The Pour Curator used to give before he opened a meadery are hard to find. That's why this book is so valuable.

After the introduction, Canned! Artwork of the Modern American Beer Can is organized by geographical region and then alphabetically by brewery. I think it's broken down perfectly, with a few dozen beer cans looked at per region. And let me state now that the photography in this book is absolutely spectacular and thorough. You will see 225 pages of large photographs that will shame every iPhone picture you EVER took of beer bottles or cans! Seriously.

And this definitely isn't just a picture book. Russ did some mega-research compiling this Epic. Each can lists the brewer, can artist, style of beer and date the can was released. Beyond figuring out who the artist was, he found stories on why certain colors/patterns/artwork were used when creating particular can designs. He researched, spoke with hundreds of breweries, probably even bothered them a second or third time to get the story right! And this guy still has enough time to respond to tweets!

For me, the fun parts of the book are the stories behind the beer names and corresponding can artwork. Weirdos, professionals, those willing to draw for a few cases of beer? Yep. Russ also did a great job following the progression of several cans. Dale's Pale Ale is a notorious study over its 12 year history. I personally liked seeing a few pages on the Old Chub can progression too, something I had noticed a few years back myself. Name changes, canning location changes, color changes, canning line upgrades. Yeah! I also liked to look back at my own comments to compare notes about particular can artwork that usually involved first impressions only. 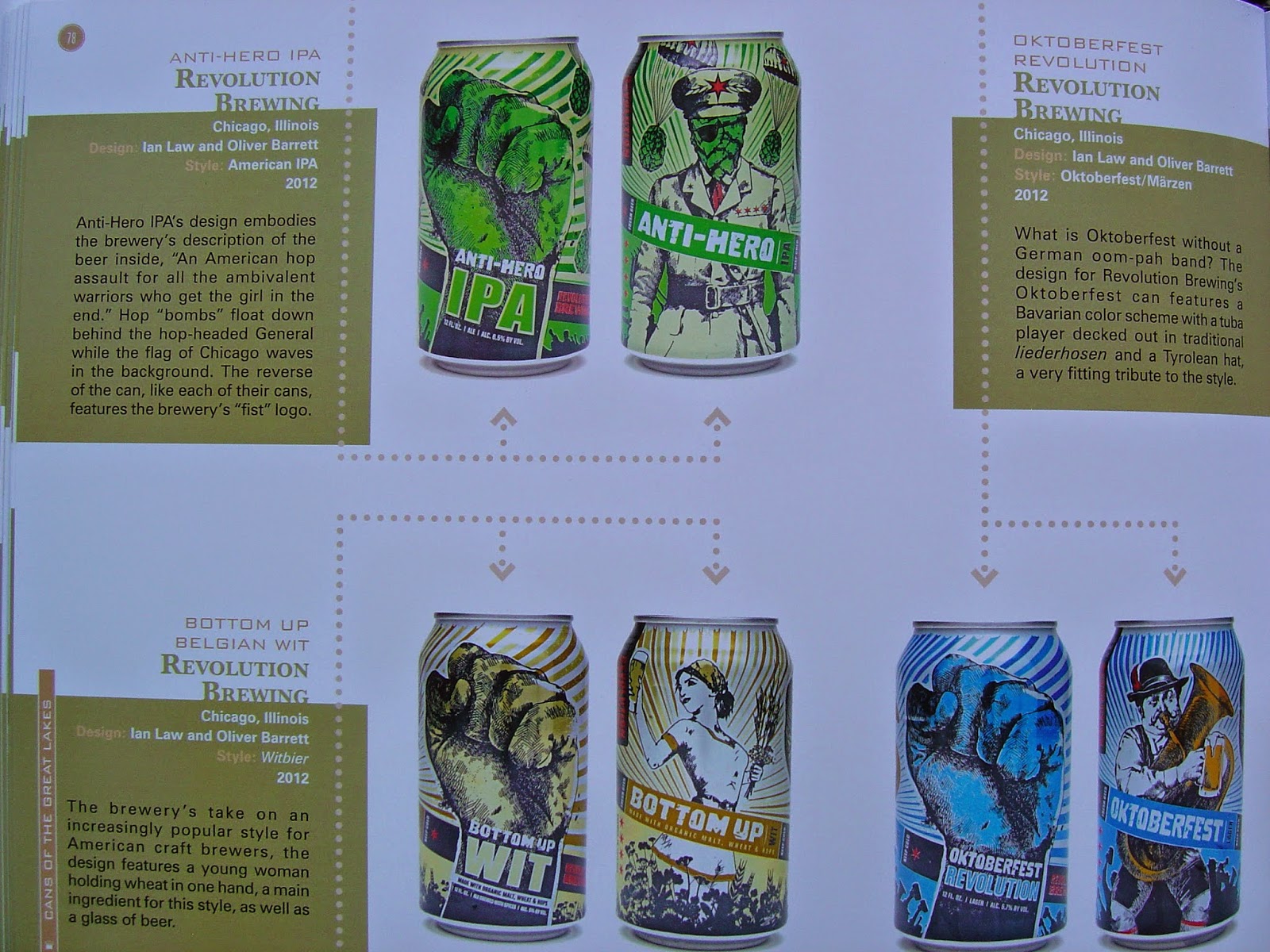 It's a great book that shows off the entire country. Looking through the entire book multiple times, in no particular order... I love the art work from Alchemist, Half Acre, Mother Earth, Butternuts, Sixpoint, Sun King, Avery, Revolution and, damn right, Oskar Blues! Oh, and Ralph Steadman, who does the Flying Dog artwork, is in a class of his own!!!

This is a terrific book for beer art enthusiasts and anyone that enjoys some interesting stories that revolve around can art. Must read! Grab yourself a copy today! I look forward to Volume 2.
Posted by Beer Drinker Rob at 8:54 AM