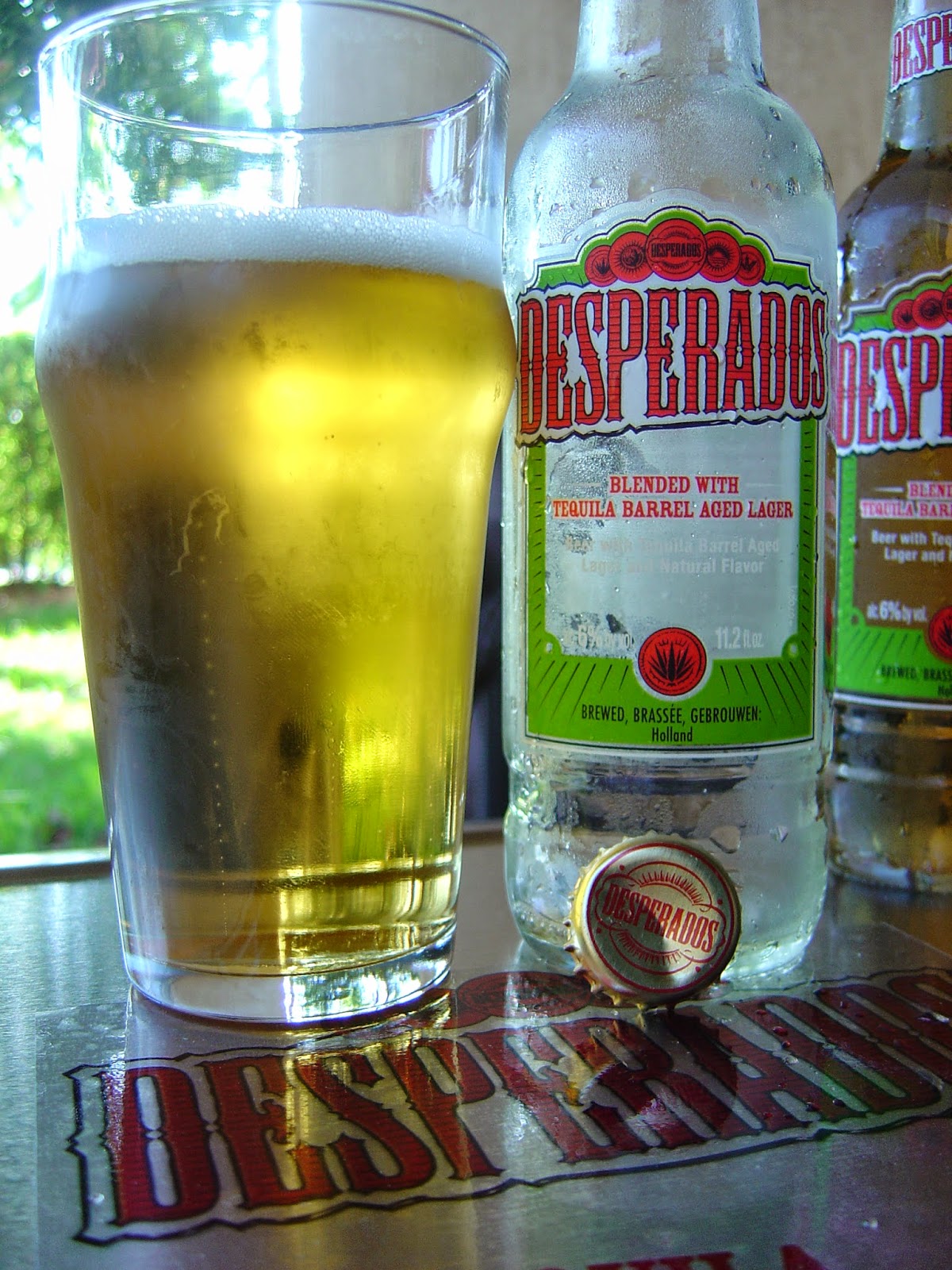 Yesterday, a Coleman cooler was hand-delivered to my house! Inside was a sixer of Desperados chilling on ice with a bottle opener just begging to be used! Alas, It was 11:25 am and my boss frowns upon day drinking, mostly. So yeah, Heineken went out of their way to hire a great communications firm to help them launch this "Latin-Inspired European Import Beer" in the US.

Desperados is a beer with tequila barrel-aged lager and natural flavors added into it, "brewed at the crossroads of beer and spirits techniques." For the record, every notable craft brewer has a barrel aged beer, though tequila isn't usually the spirit, so maybe this is the Holy Grail. It's brewed by Brassée Gebrouwen in Holland and packaged in 330 mL clear glass bottles. The label is just a flashy sticker, all name and no art, but the actual bottle has DESPERADOS stamped into the glass, which I do find very cool. Alcohol 6%66 Countries this beer is already in.

"How about the product, Beer Drinker? I want some of those 'Memorable Nights Out' when I try this new 'Spirited Beer.'" My guess is that Heineken thinks that the Becks Sapphire and Bud Light Platinum and Miller Fortune beers of the world are stealing what their press release says could be "55% of [Desperados] consumption from outside beer." 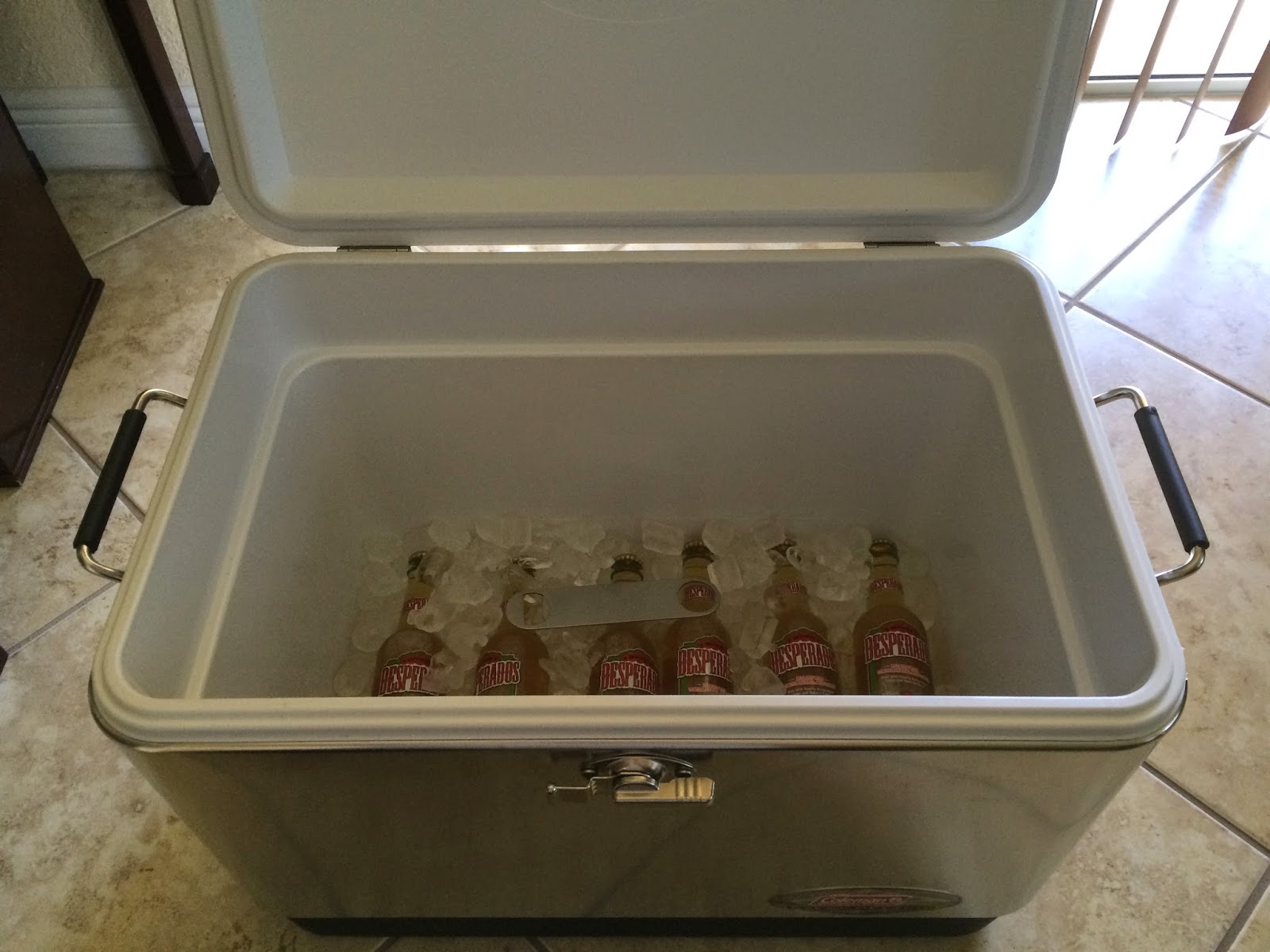 I drank a bottle last night and another today, so consider this a comprehensive double-look. The aroma isn't very strong, though there is some apple and lemon, grain, with some light skunkiness. Brown bottles or cans next time?

Fruity flavors to start, apples and plenty of citrus. My wife said it smelled and tasted like an apple soda. For me, the lemon was fairly harsh and seemed to be what the brewery decided to add to make you think perhaps this tasted like a Margarita with the tequila flavor they were hoping came from those barrels. That flavor had an ugly cleansing property to it and produced a "stick-out-the-tongue-I-don't-like-this-look". Not sure that I tasted any tequila either.

Desperados is mostly strange, a little off in many ways. Not refreshing, some unpleasant and even skunky flavors, weird combinations. The beer is not horrible but probably needs a mascot, a helluva commercial campaign, and some super hot, almost naked chicks to sell it. I know Heineken has all of those and can pull this off, though I'd recommend they put them behind a better brew. Sorry, but I guess I am not a "young consumer who is spontaneous, adventurous or whose drink choices reflect who I am." I actually DO NOT prefer Heineken to this though! Give me their Bohemia from Mexico instead!

Posted by Beer Drinker Rob at 9:56 AM

I don't prefer Heineken to anything.

Haha, yeah you're right. Neither do I. But there's some perspective on where Desperados ranks.

Worst Soda Ever as well!