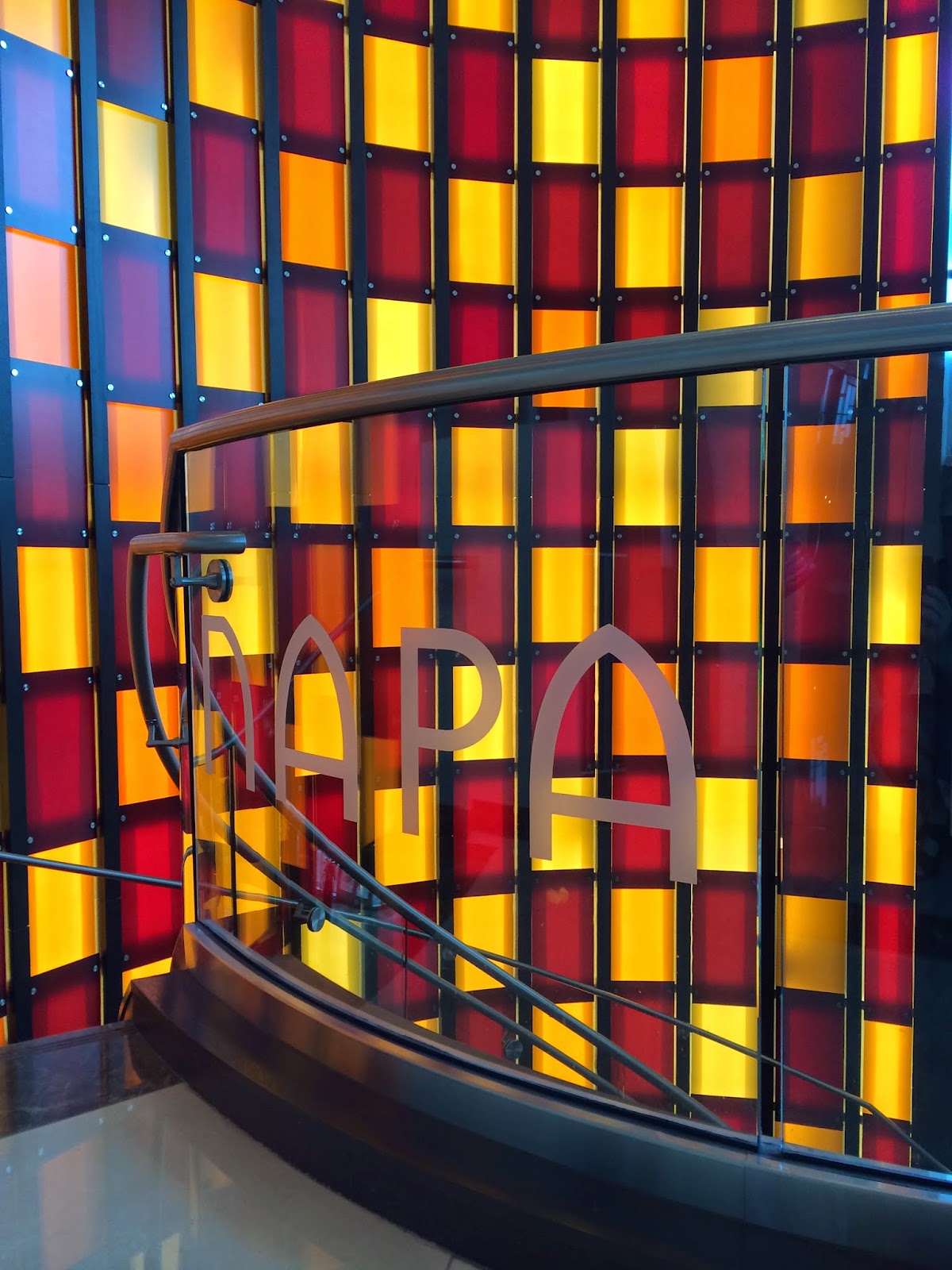 Last Friday night, Hyatt Regency Orlando's Napa Restaurant hosted a dinner featuring dishes from Chef Jared Gross paired with craft beers brewed by Unibroue. I was asked if I'd like to make the trip from Miami to check out their first beer dinner, one planned within a larger series that features different wine pairings. Of course, by now, you already know I said that I'd love to be there!

My wife and I arrived to the hotel early afternoon and relaxed by the giant pool for a few hours before getting ready for dinner. By "relaxed," I mean that my wife laid on the lounge chair while 20 hotel kids and I rode the hotel's very own water slide--dozens of times! I wanted to stay longer but, well, you know how it is. So we went back to our killer suite near the top of one of the hotel's towers. This Hyatt Regency is attached to the convention center and is immense!

Then came a knock at the door. Hmmm?!? Since I was in the shower, my wife told me that the hotel just delivered champagne. But a few minutes later, I read the card which was a short note from Chef Jared and that "champagne" was a wine-sized bottle of Unibroue's La Fin Du Monde! Yep, Chef was sending a very unique and nice gesture in anticipation of our arrival at the dinner. So I sat around and drank that over the next hour. YUM!

As you can see, the hotel already made this a pretty awesome stay and the dinner hadn't even started yet. We arrived at Napa, one of the Hyatt's restaurants right at 6:30 pm for the start of the reception. Our hostess let us know that they were expecting around 30 guests for dinner, and she let me roam around toward the back of the restaurant and take some pictures while things were still pretty empty. 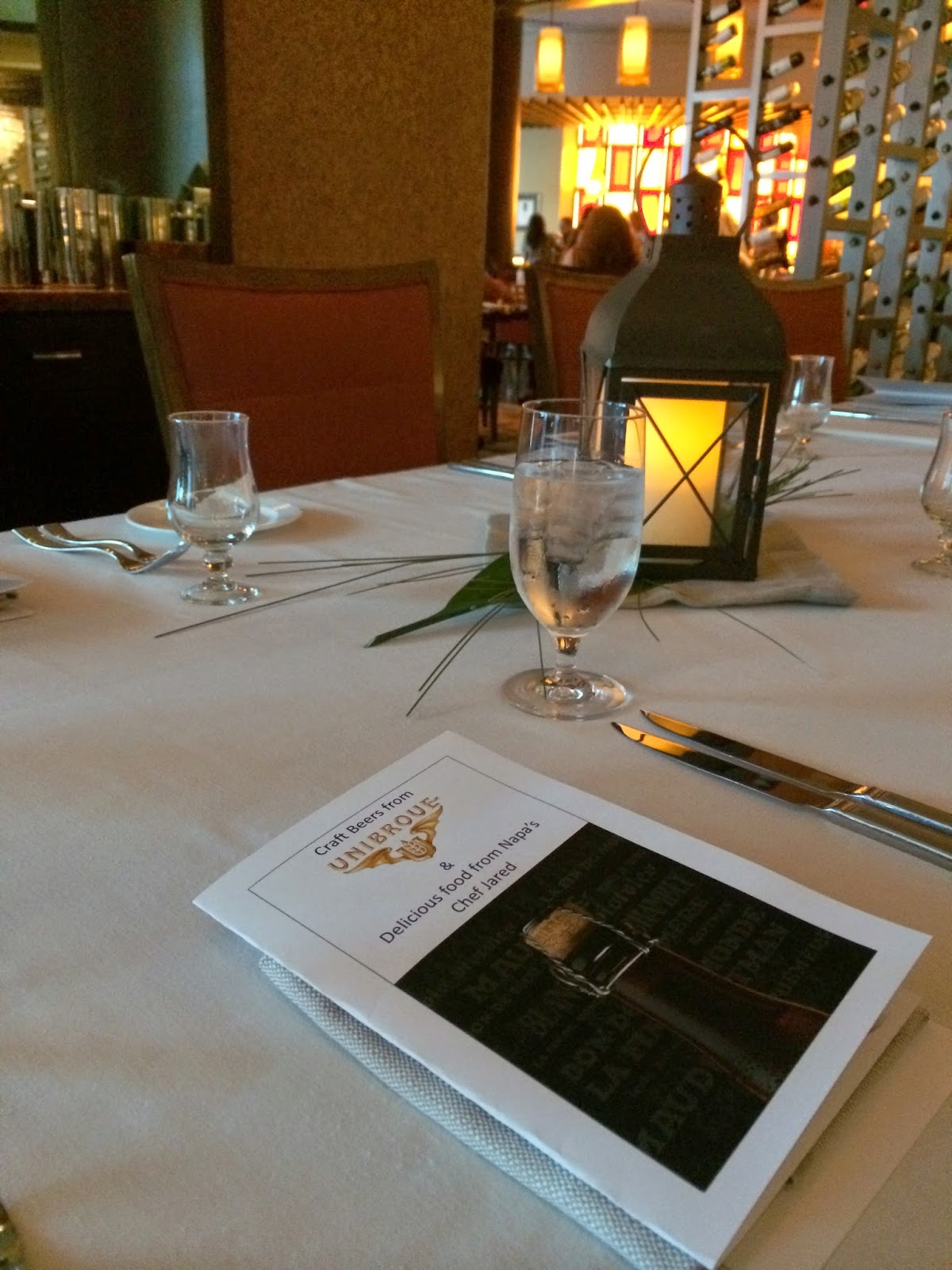 As we waited for the others to arrive for dinner at 7:00 pm, we were served a small appetizer bite of oyster, chorizo and creamy spinach paired with Unibroue Ephemere. We actually were given a few samples of  the food and beer. I loved the flavor and texture of the spinach against the crunch of the sausage. And Ephemere has an apple tartness, spicy coriander and a cider-like character that is delicious.

By 7:00 everyone was there. Hostess Amanda introduced herself and the restaurant to the group, indicating that using locally grown ingredients was important to them while preparing their "farm to fork" menu. She then introduced this event as their first beer dinner and Michael from Unibroue, the other half of the craft beer pairing dinner. 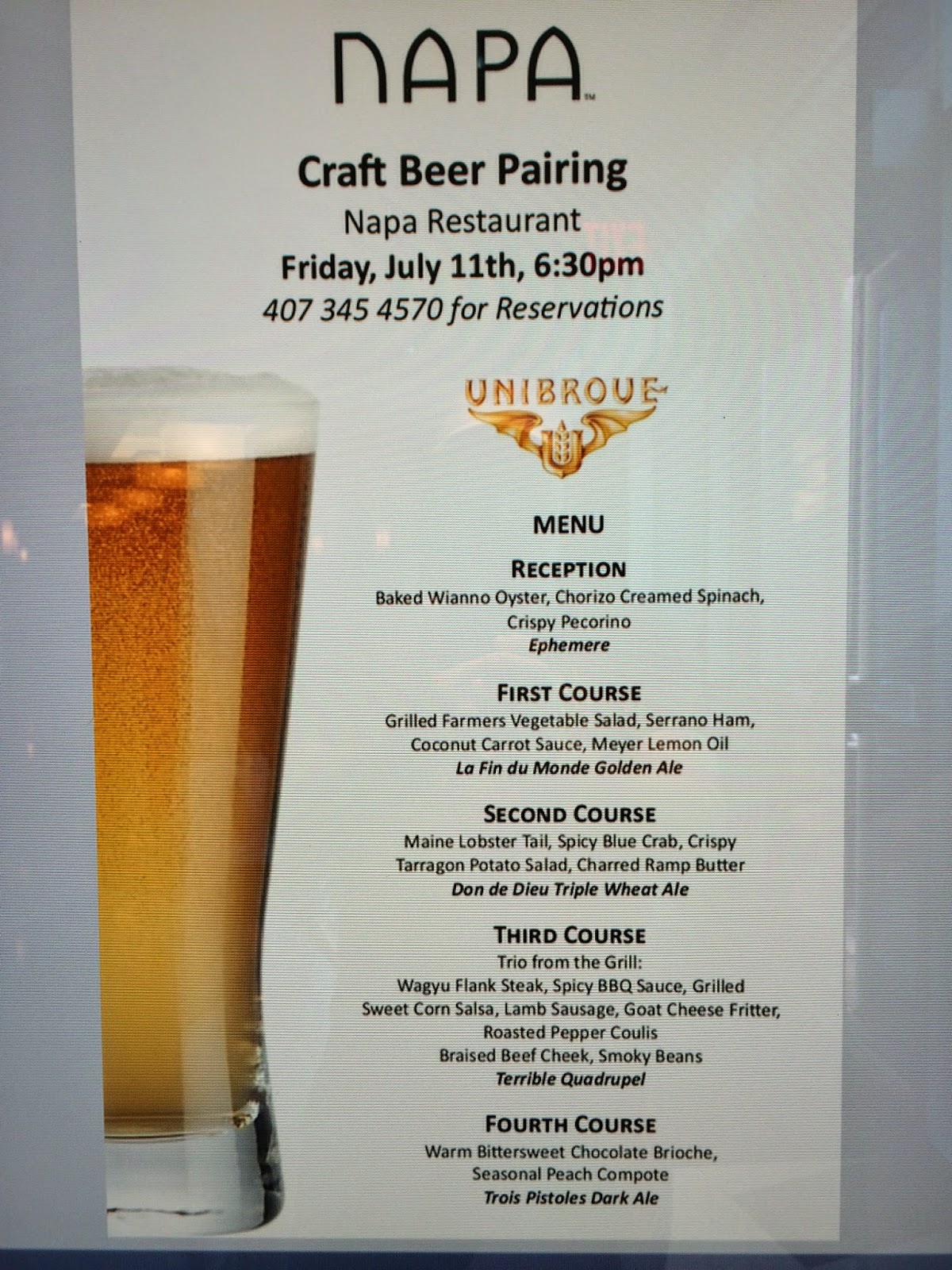 Michael gave a short history of the brewery, indicating that Quebec's Unibroue was originally formed to be a distributor. Unibroue's owners found brewing, and brewing Belgian-style beers in particular, to be a more intriguing business. They went to friends in Belgium for advice and yeast and decades later produce some of the best examples of Belgian beers outside of Belgium. The historical and language roots of Quebec are very important to the brewery and can be seen in the names of all of their beers.

Michael stepped back to the reception beer and explained that Ephemere is short for ephemeral or seasonal. He then introduced the First Course beer, La Fin du Monde Golden Ale just as Chef Jared arrived to deliver his Grilled Farmers Vegetable Salad with Serrano Ham. You read earlier that I already had the big bottle of La Fin du Monde, right? Well then you know I loved a little more, duh! The salad had a beautiful presentation, and the fresh, crunchy, flavorful veggies were awesome. Chef said that he added some Meyer lemon oil to bring out some of the fruitiness in the beer. My wife's favorite and I thought it was terrific! 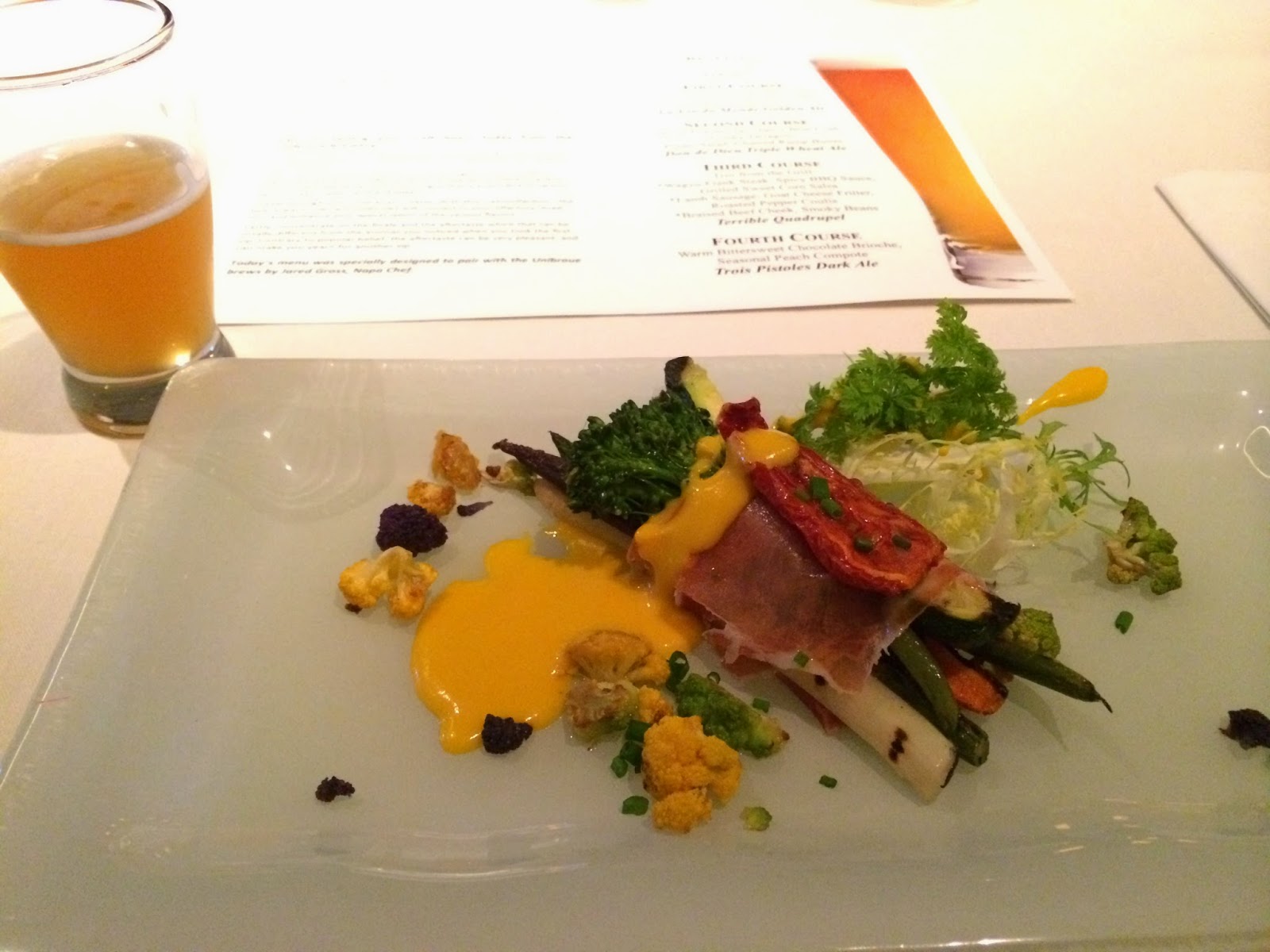 The Second Course was the one I was looking forward to most from the advanced menu: Maine Lobster Tail, Spicy Blue Crab and Potato Salad! This was served with Unibroue Don de Dieu Triple Wheat. Michael said this was the world's only triple wheat. It was spicy with a nice sweetness that complemented the tender buttery lobster very nicely. I loved the spicy crab and potato salad with the lemon squeezed over them as well. 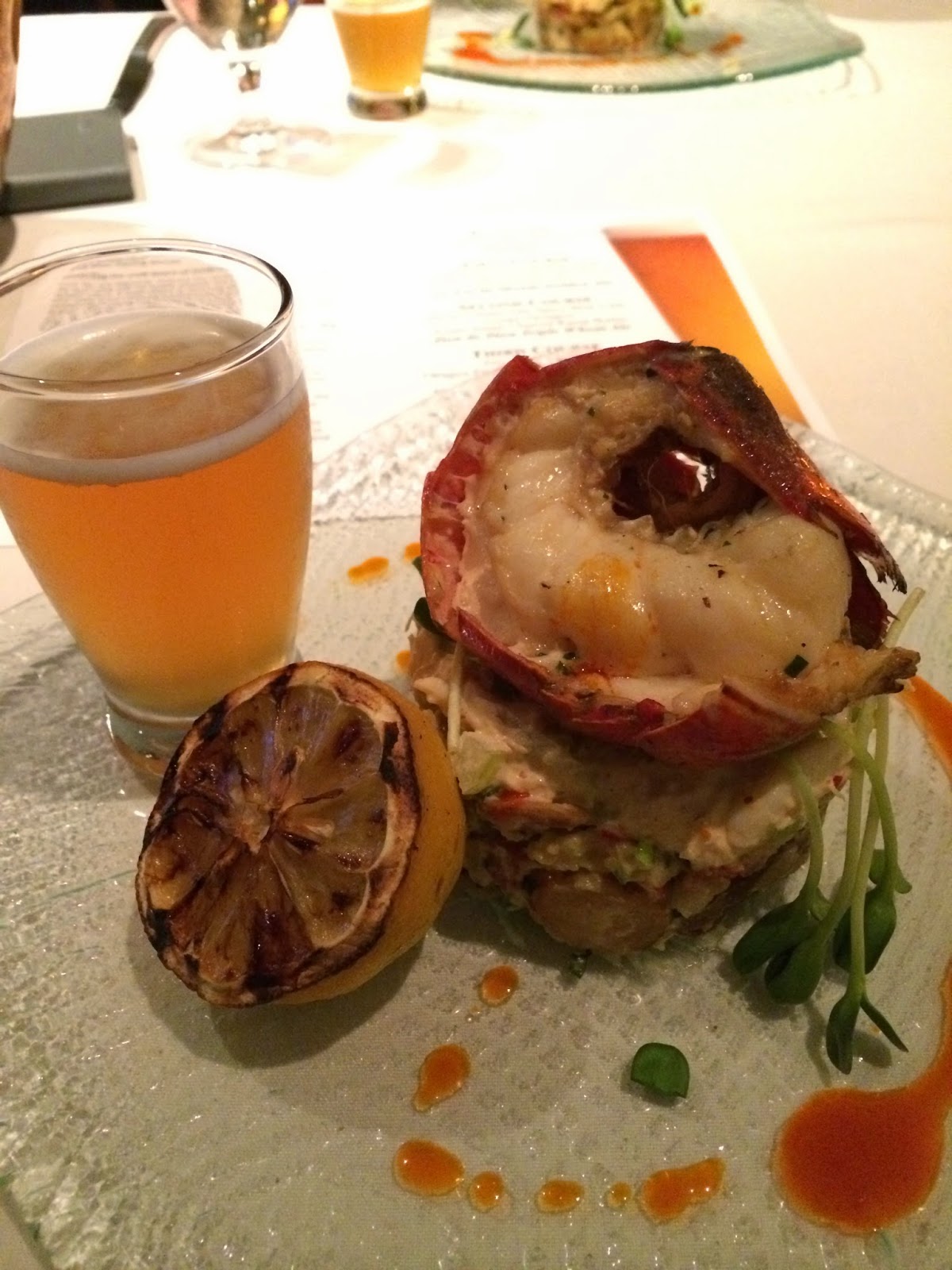 The beer for the Third Course was Terrible! Before you get all bent out of shape, that's just the name of the beer, which is NOT meant to mean that "it sucks." It's French! You might enjoy the banter about the subject in this review. Michael took the joke well considering I'm sure he's heard it once or twice before. Terrible Quadrupel was paired with a "Trio from the Grill." The Wagyu Flank Steak was terrific, the Braised Beef Cheek kicked ass, and the Sweet Corn Salsa made them both better! 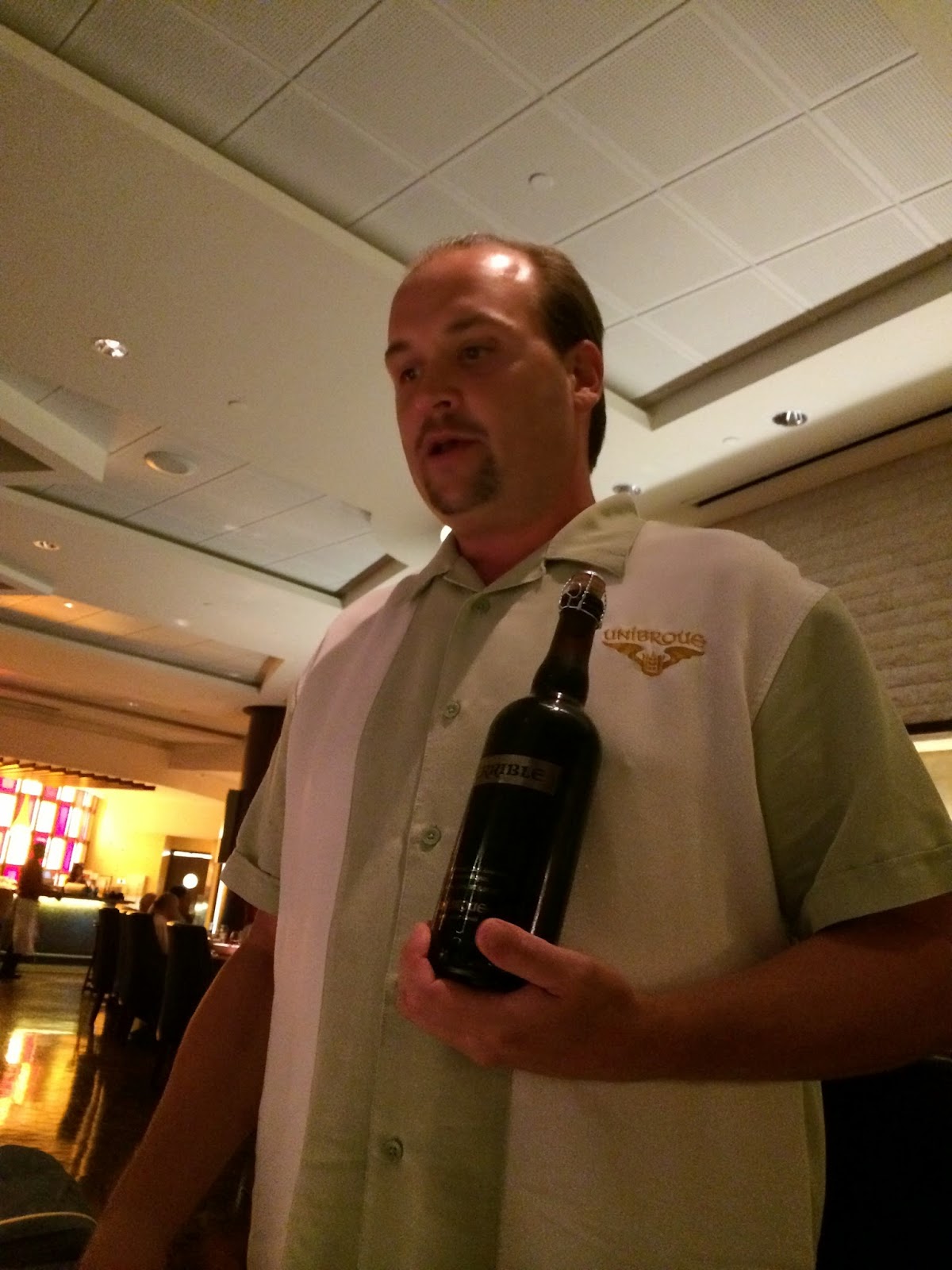 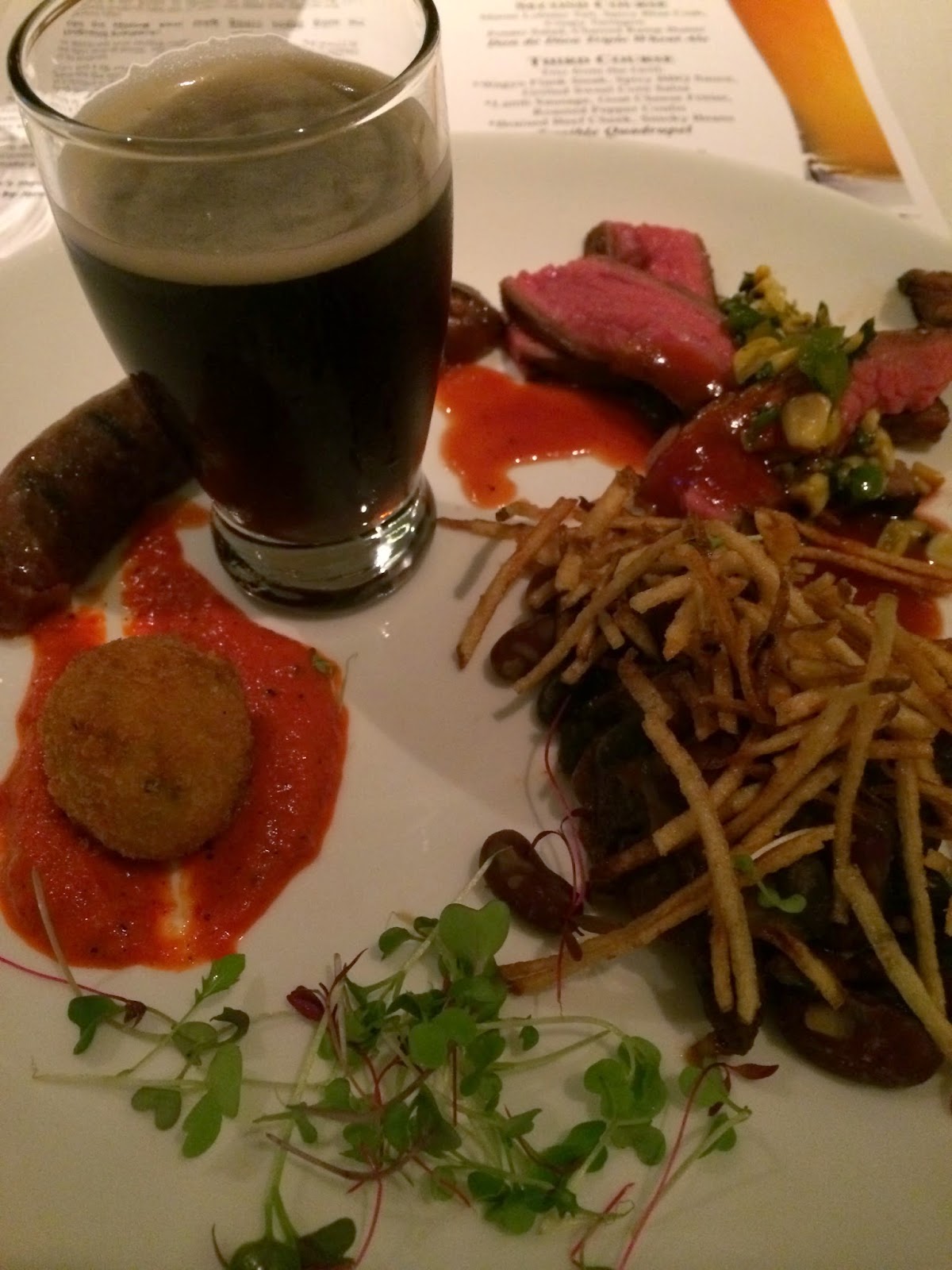 We finished the meal with a Fourth Course dessert composed of Bittersweet Chocolate Beignets with peaches. The crunch of the beignets worked great with the peaches, and the chocolate was awesomely paired with Unibroue's Trois Pistoles. The dark ripe fruit and spicy cinnamon flavors the beer offered were a great complement to the food.

My wife and I met a nice couple from North Carolina that was at the convention center for another event. As we chatted at the end of the meal, Napa's staff surprised one of the other guests with an awesome chocolate birthday cake. And the birthday girl shared with everyone else there! And Michael gave us all a present too, a Unibroue Recipes cookbook. Can't wait to give it a whirl.

I had a great evening and made a full weekend out of the trip. The hotel is beautiful and there's obviously lots of other stuff to do around Orlando when you're in town. I hope that Hyatt Regency will continue to have more beer dinners at their restaurants in the future! Thanks for the invitation and congratulations on a very successful event! 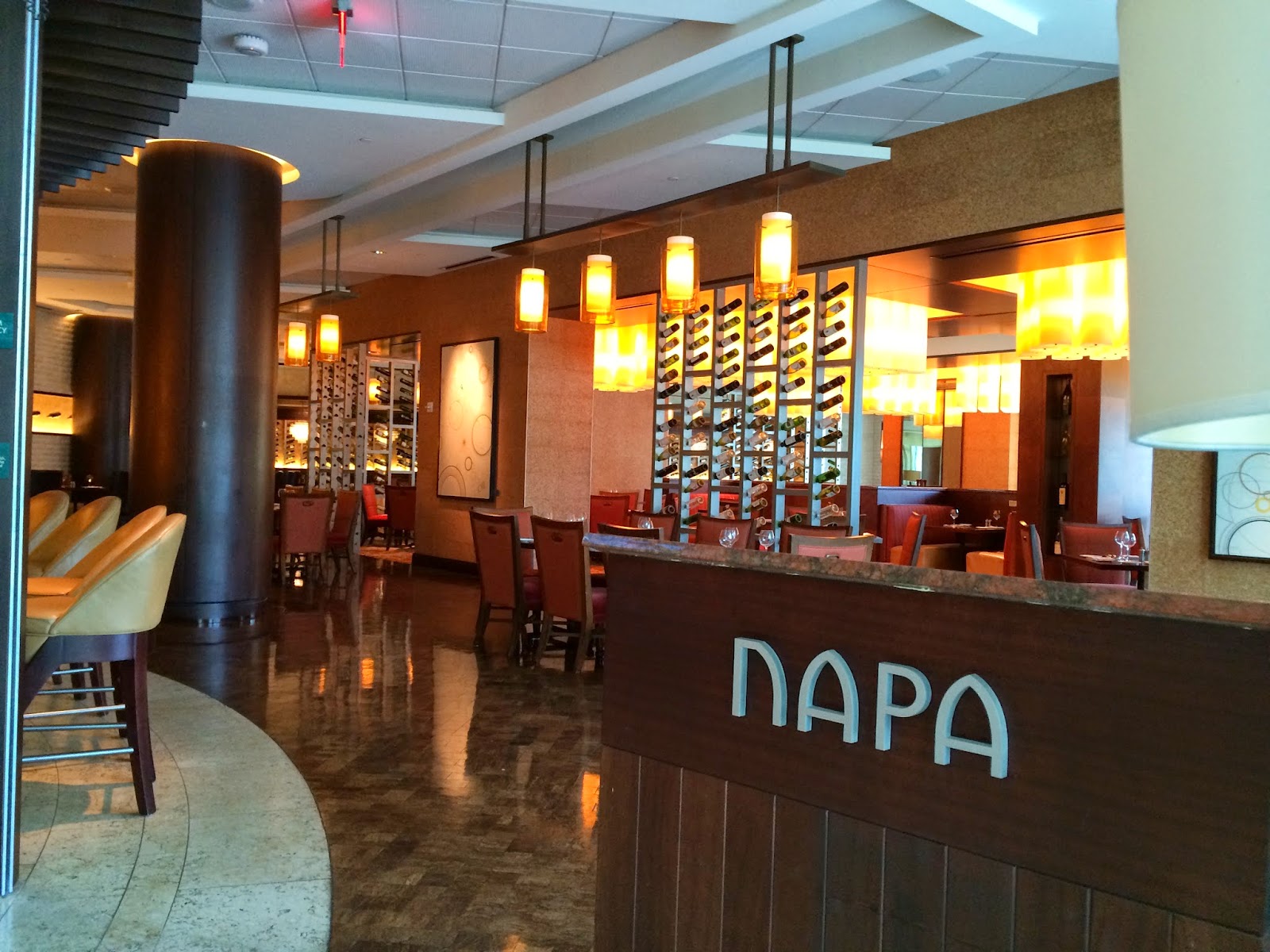 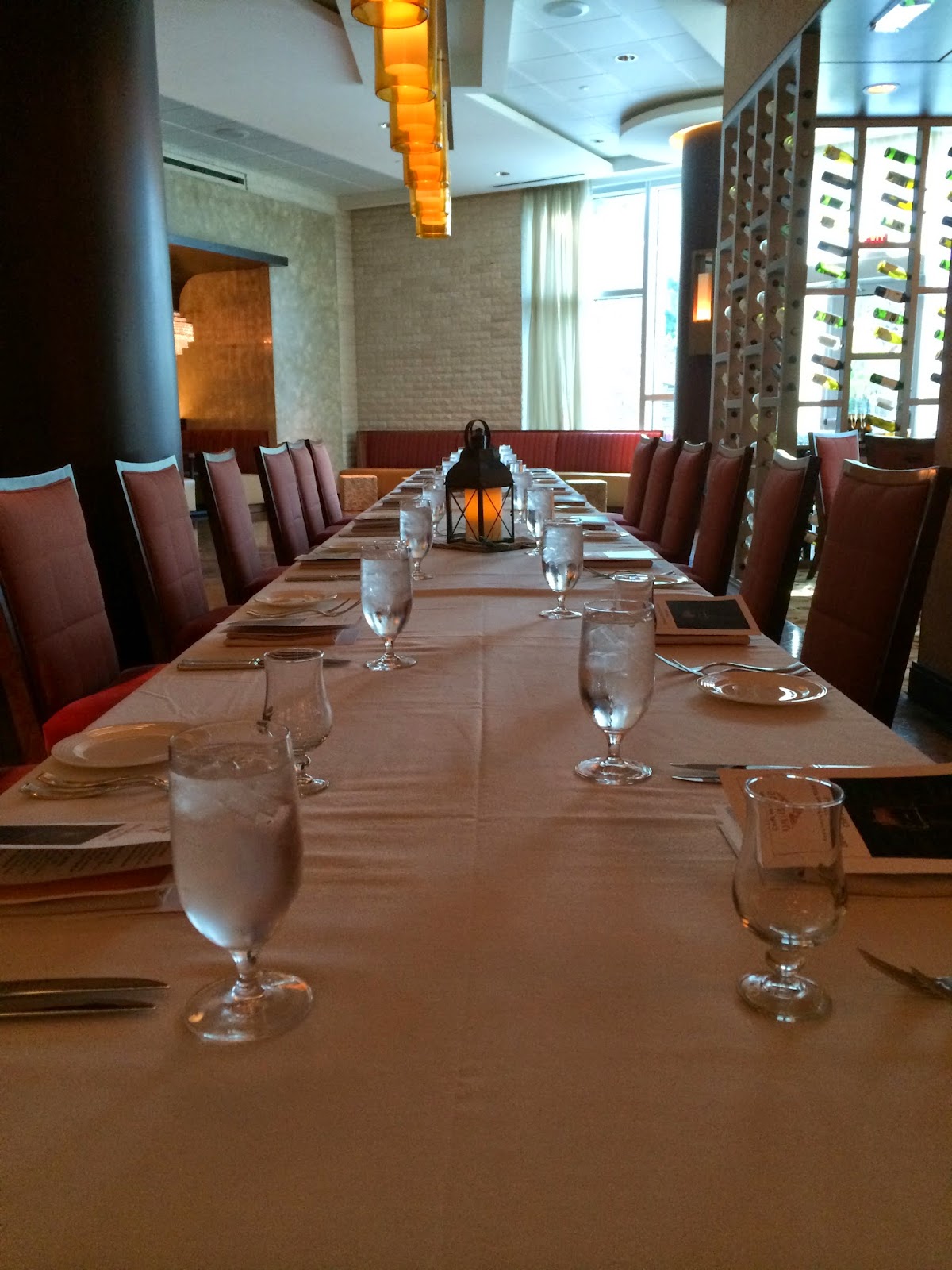 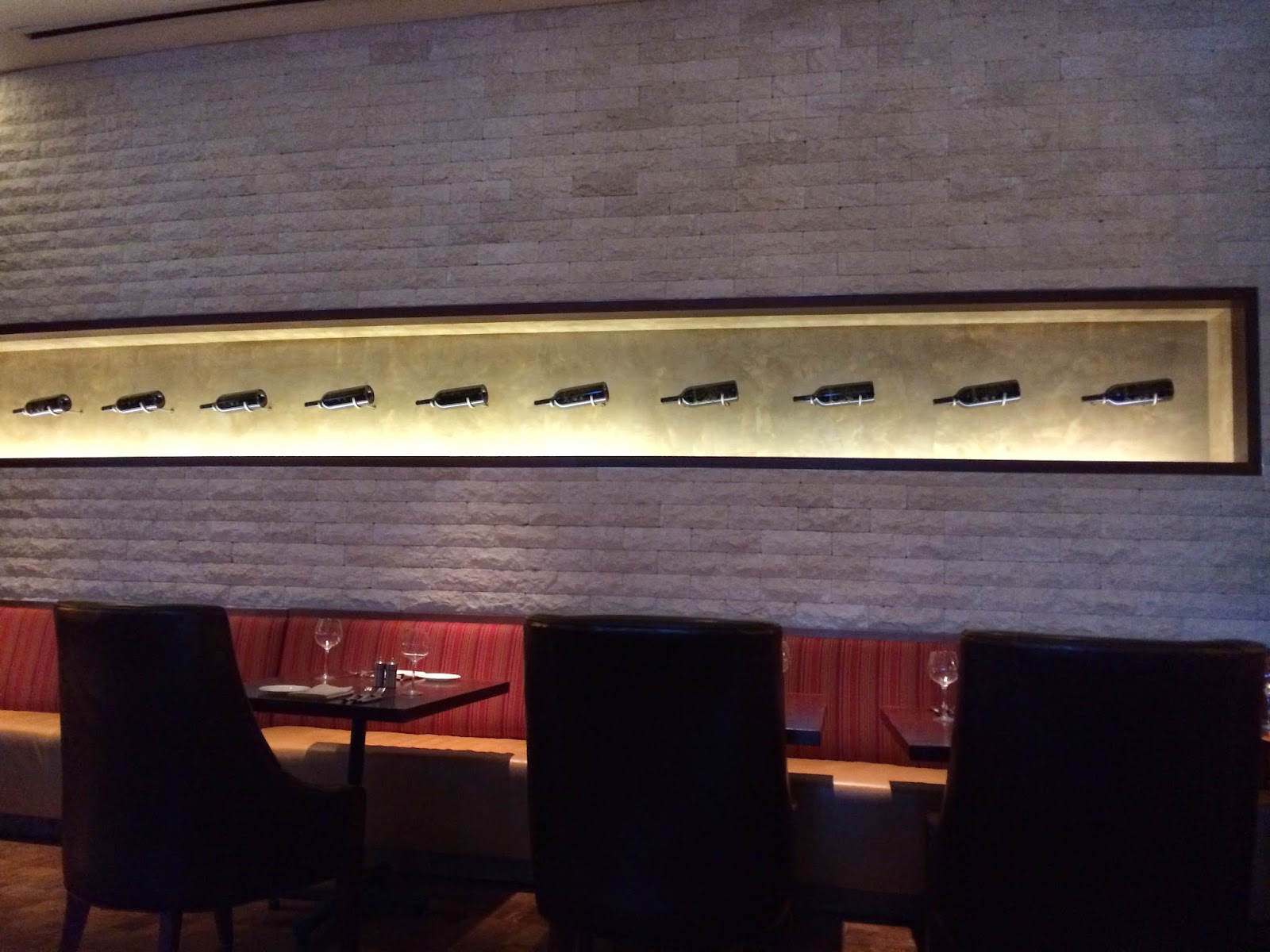 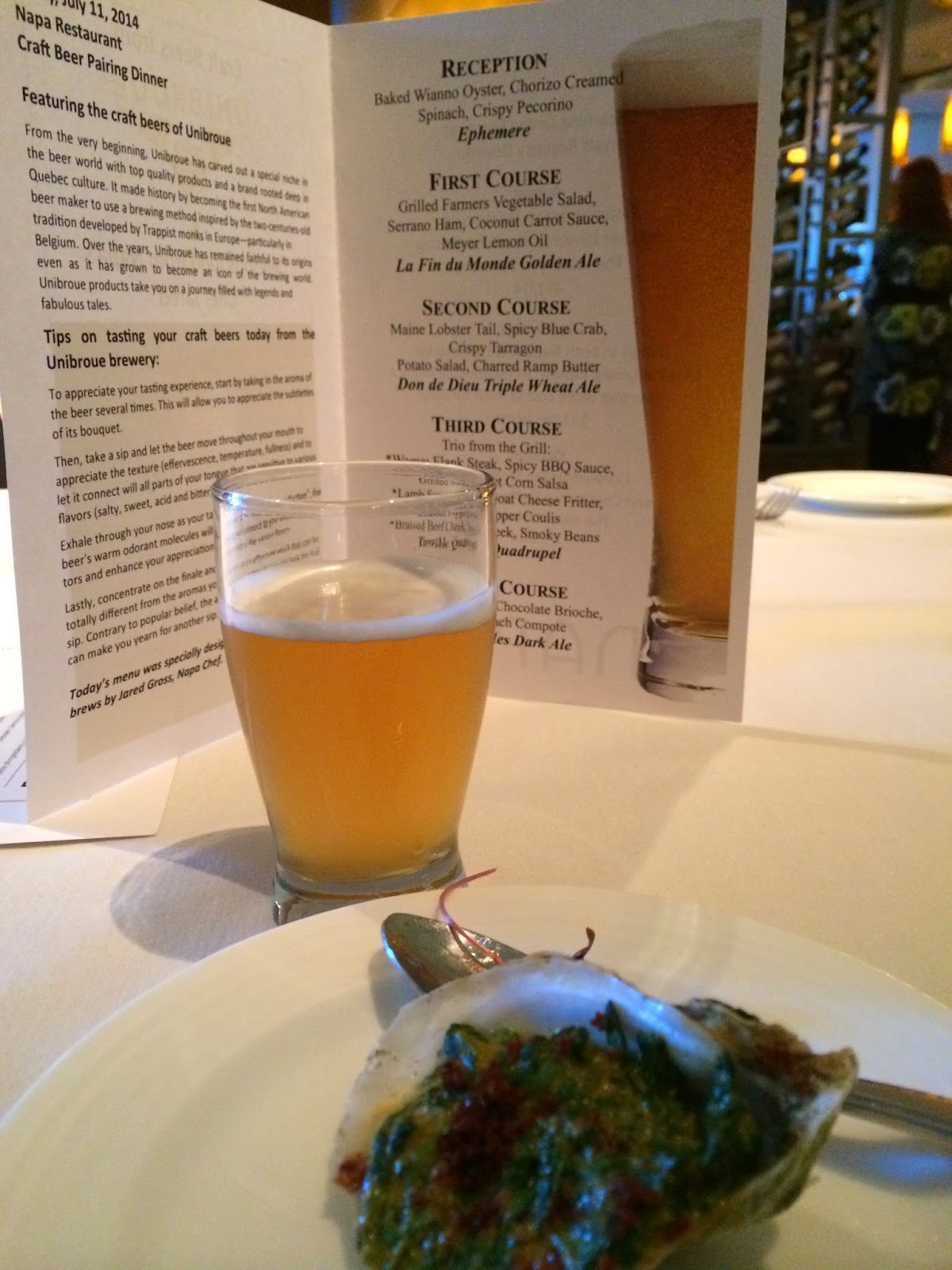 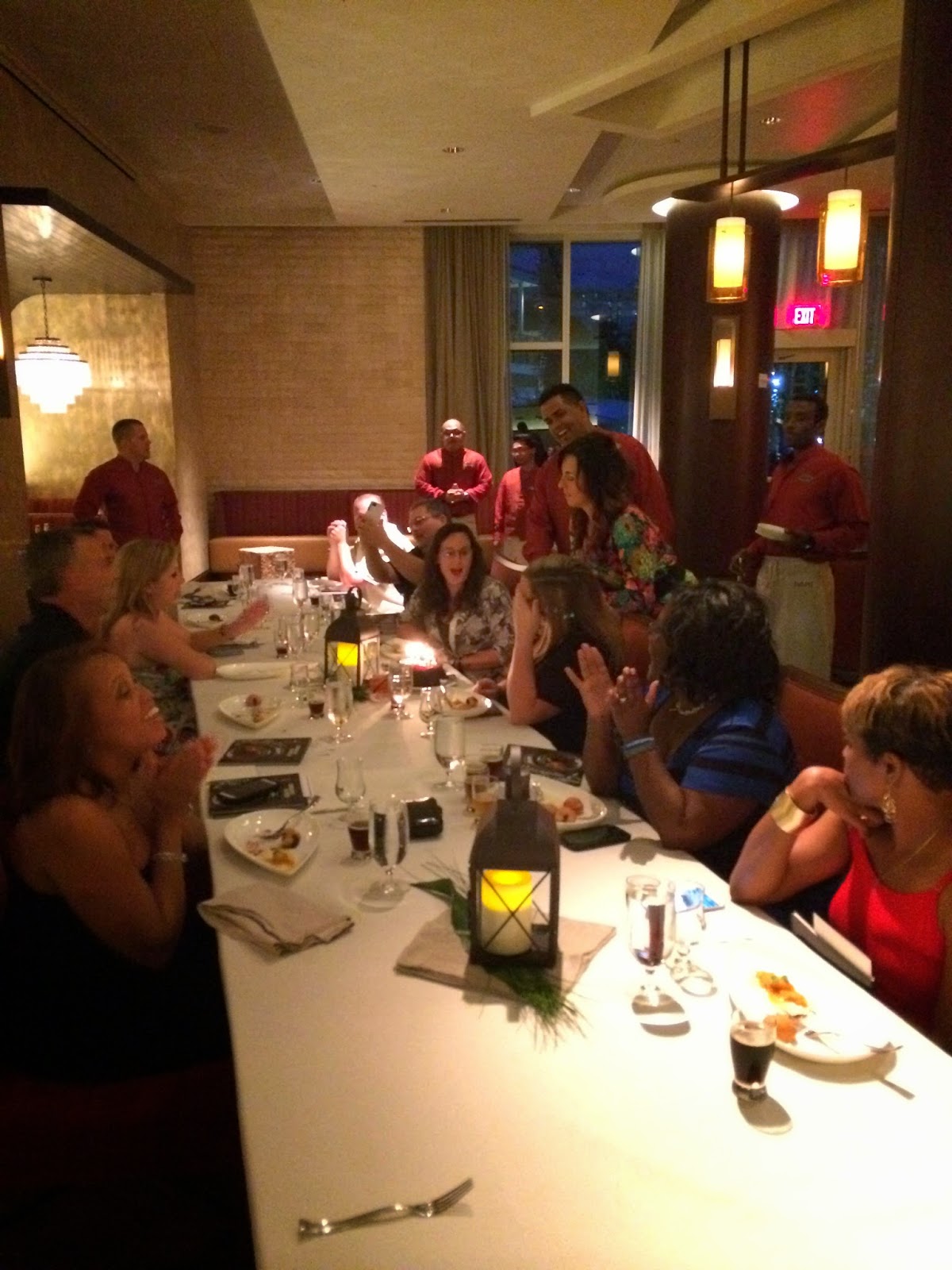