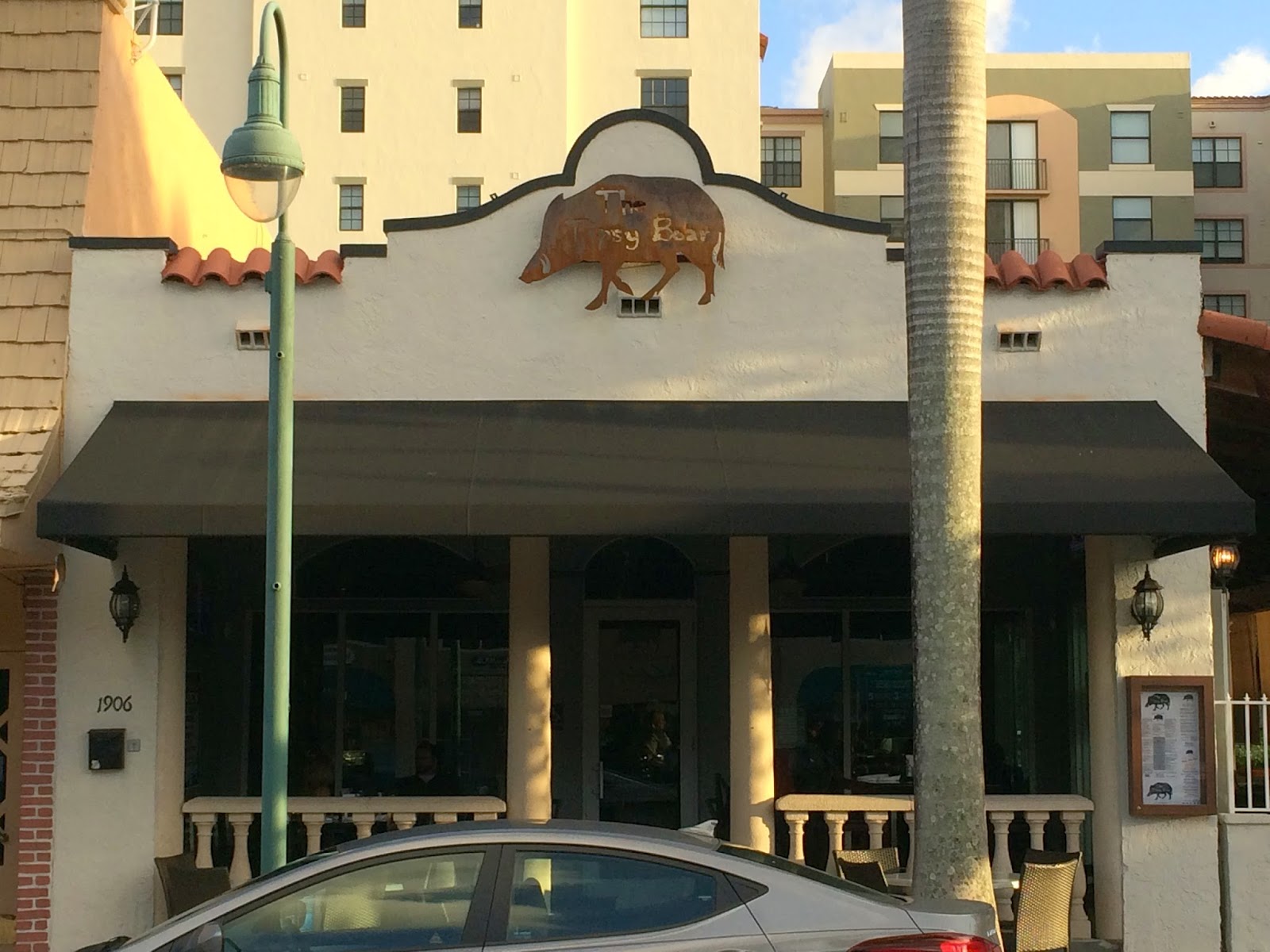 Tuesday night I went to a kick-ass beer pairing dinner at The Tipsy Boar in Hollywood, Florida. And the featured brewery was Green Flash Brewing out of San Diego! I hadn't been there before, but apparently I've been missing out on 40 taps and an awesome menu. For this event, I was invited by Ed Roberts (back on Twitter) and Stephens Distributing (they always have the best parties).

I arrived early of course, but was greeted by Tim and Jamie and Richard from Stephens and Luis Carrizo, Green Flash's South Florida District Manager. They all had cool Green Flash shirts of which you could say I was envious of all evening. But they bought me a few beers, so you know. We chatted and I took a bunch of pictures as I sipped a sample of Ristretto Cosmic Black Lager, a limited release beer (I had a pint later too, LOL) served much later with dessert. 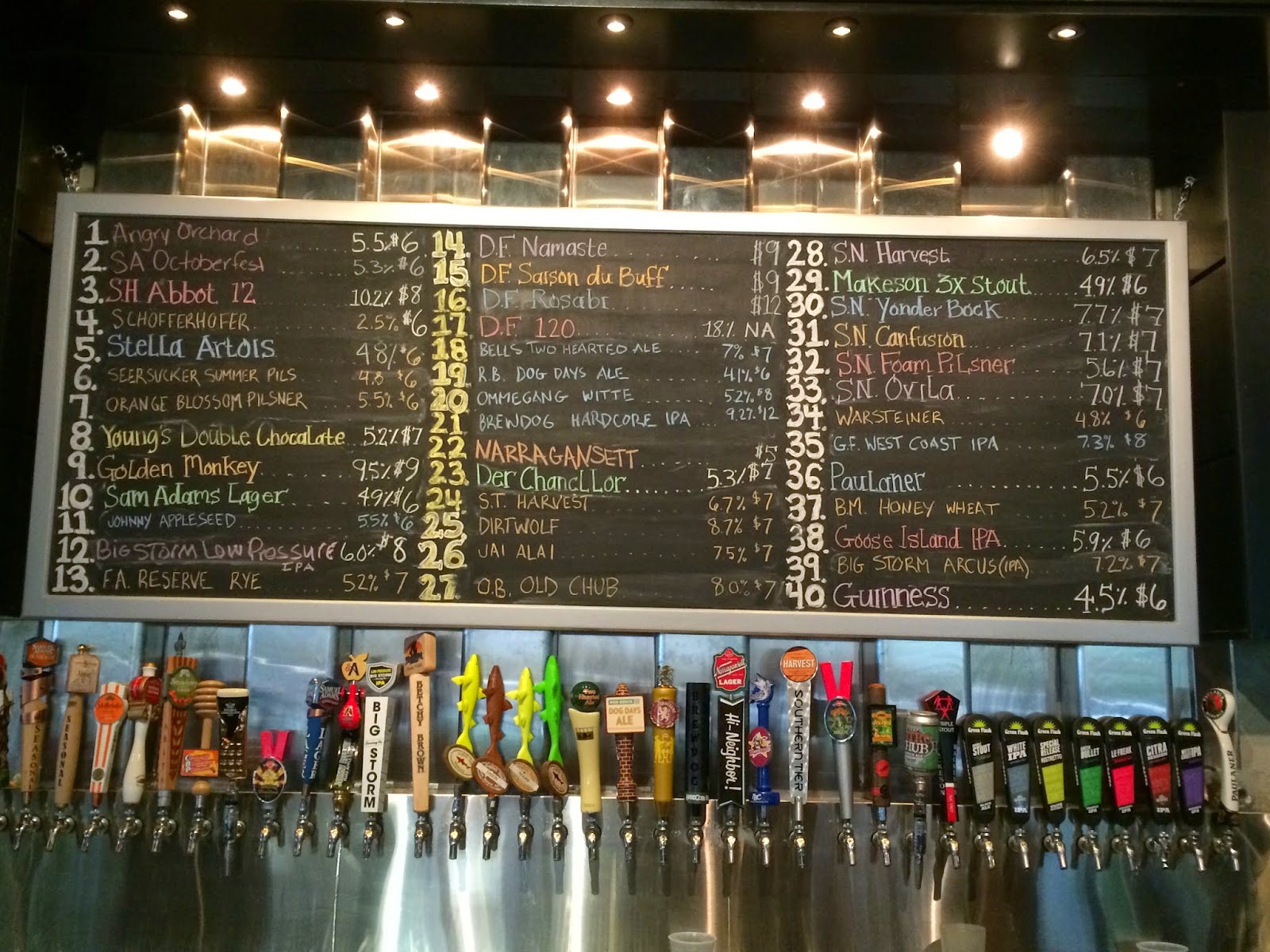 I told a bunch of the people at "Richard's Table" that for me, this was a little different than the typical beer dinner. First, there were six food courses each paired with a great beer (doesn't count the pre-game course). Luis had mentioned earlier that Green Flash is known for their IPAs and their core lineup that doesn't drift below 8% alcohol, so there's that too, LOL. But the main difference was that the menu was less of a traditional meal progression and more of a (big portion) sampling of the best dishes the restaurant has to offer. Picture Gordon Ramsey or Robert Irvine walking into a restaurant on one of those shows, ordering 10 items like they always do, and LOVING all of them so much they licked their plates. Yeah! 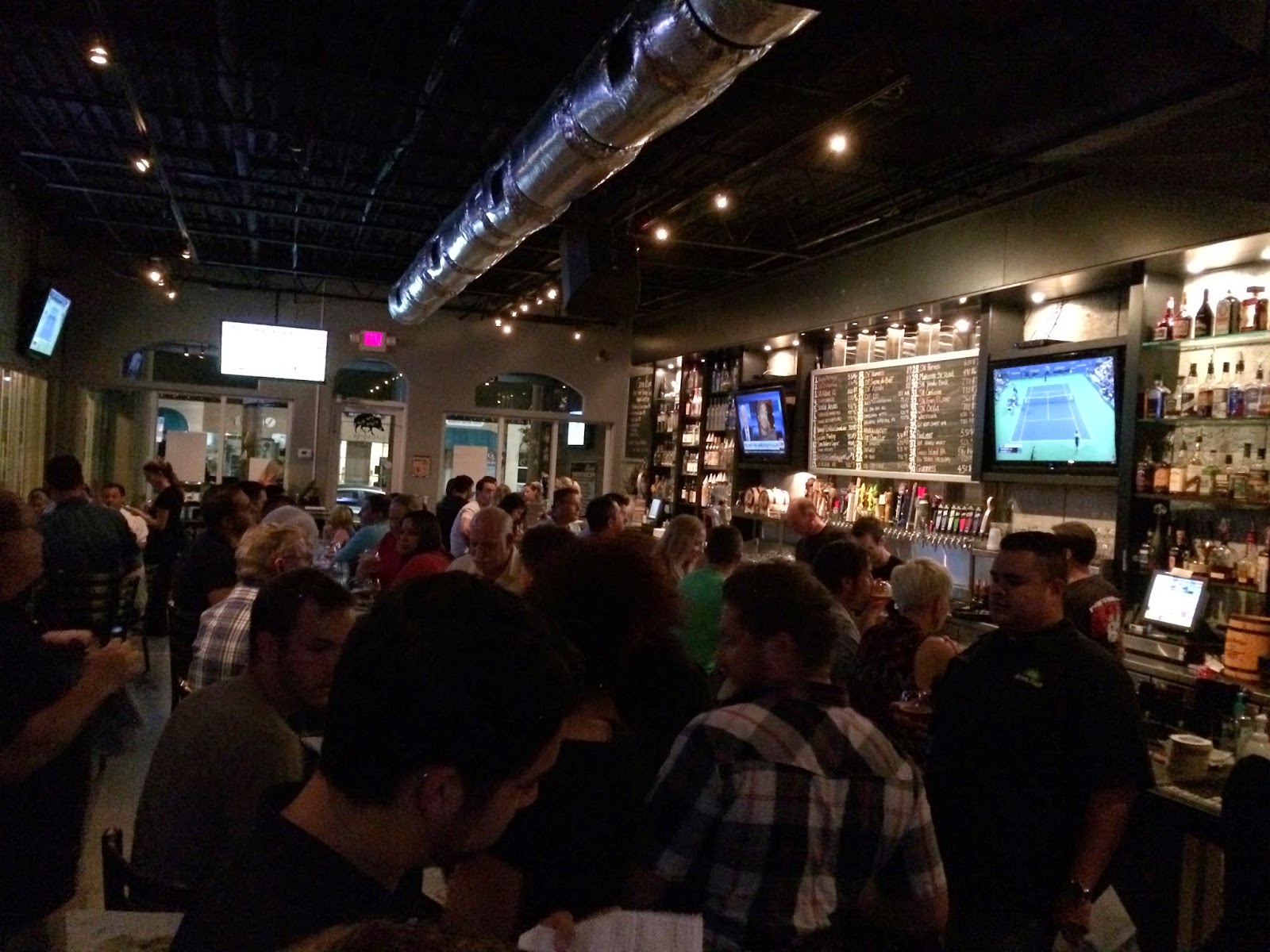 We started with a Spicy Ahi Tuna Tar Tare Topped with Guacamole and Crispy Won Tons paired with Hop Odyssey Citra Session Ale, a beer I hadn't tasted before. I loved the spicy tuna, loved it! There was a "spare" plate from one raw fish hater that I pretty much ate as well. The beer was super astringent and full of grapefruit and lemon rind bitterness, great as a pairing beer for this rich dish.

Next up, that Grilled Jerk Chicken I mentioned above served with a second Hop Odyssey beer, their White IPA. Luis mentioned that the beer was originally a collaboration Green Flash did with Founders Brewing. The dish was beautifully presented (as they all were). OMG, let me tell you how awesome the chicken and noodles and intense though not overpowering spice was. Moist chicken, crunchy vegetables, peanuts and curry spice made it pop. Since I never swear, SO FUCKING GOOD! I was NOT the only person to say that at my table.

As each dish was being served, including by the owner of the restaurant, Jamie had a recorded video to show on a TV screen above the kitchen to each of the 40 or so guests. My favorite video moment was when the beardalicious Green Flash Brewmaster Chuck Silva was asked who he'd like to drink his last beer with on Earth. Before he answered the interview question, I guessed Jesus, which seemed like the "duh" answer. But Chuck said the Swedish Bikini Team. LOL!

This may have been the pause moment where I somehow had that pint of Ristretto ordered for me. And it lasted the rest of the evening. Third course was Fork Pinched Jumbo Raviolis Stuffed with Wild Mushrooms and paired with West Coast IPA, a killer beer. So awesomely bitter, piney, spicy, intentionally aggressive! The tender fresh pasta and filling were delicious, and the almond crunch in the creamy sauce was perfect.

Our fourth entree, seriously, was Lamb Porterhouse with Okinawa Mashed Potatoes and Blue Cheese. Ed made me try the Green Bullet served with it after taking a bite of the blue cheese solo. I liked that side pairing I guess, but I have this love/hate relationship with blue cheese. Sorry but Green Bullet kicked West Coast IPA's ass all the way back to San Diego on this occasion. Super duper fresh, sweet and bitter at the same time. The lamb was tender and juicy while the potatoes were very unique and tasty.

Seared Veal Tenderloin Wrapped in Pancetta? Yes, please! Good dish, but the most memorable for this one was the Le Freak beer pairing. I used to trade beer to get this Belgian Triple/Imperial IPA hybrid, but no more for over a year now. And to help make it even more accessible, Green Flash will be opening a second Virginia Beach, VA brewery. Hope I'm invited for opening day! If you like delicious juicy orange mango tropical Belgian yeasty beers, this is your crush!

We finished up eating with what was called a TahitianVanilla Ice Cream Float served with that Ristretto Cosmic Black Lager. No skimping on the ice cream either. Delicious. I'm pretty sure that I might start having one or two of these after working out every day!

Luis told me about two new beers that are coming on November 1, 2014, so I'd be an encyclopedia of Green Flash knowledge! Not sure if this is breaking but JIBE will be a 4% alcohol 65 IBU Session IPA and Soul Style IPA will be a 6.5% alcohol 75 IBU beer named for a "hanging loose" surfing style. Not sure how much looser Spicoli could hang, but I learned a new term!

Thank you for the invitation and great food and beer and conversation and people and service and everything. I was sad to come home! 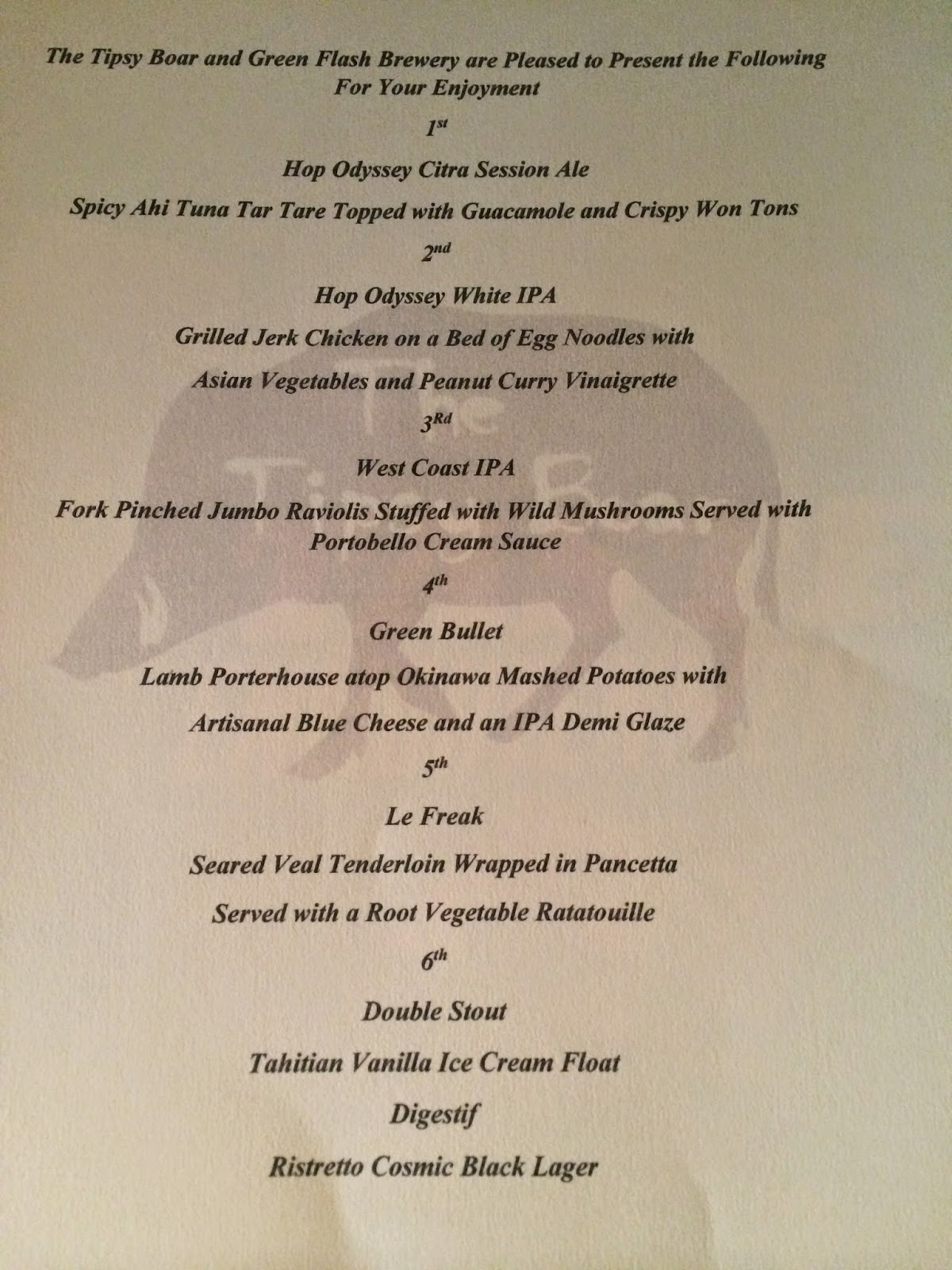 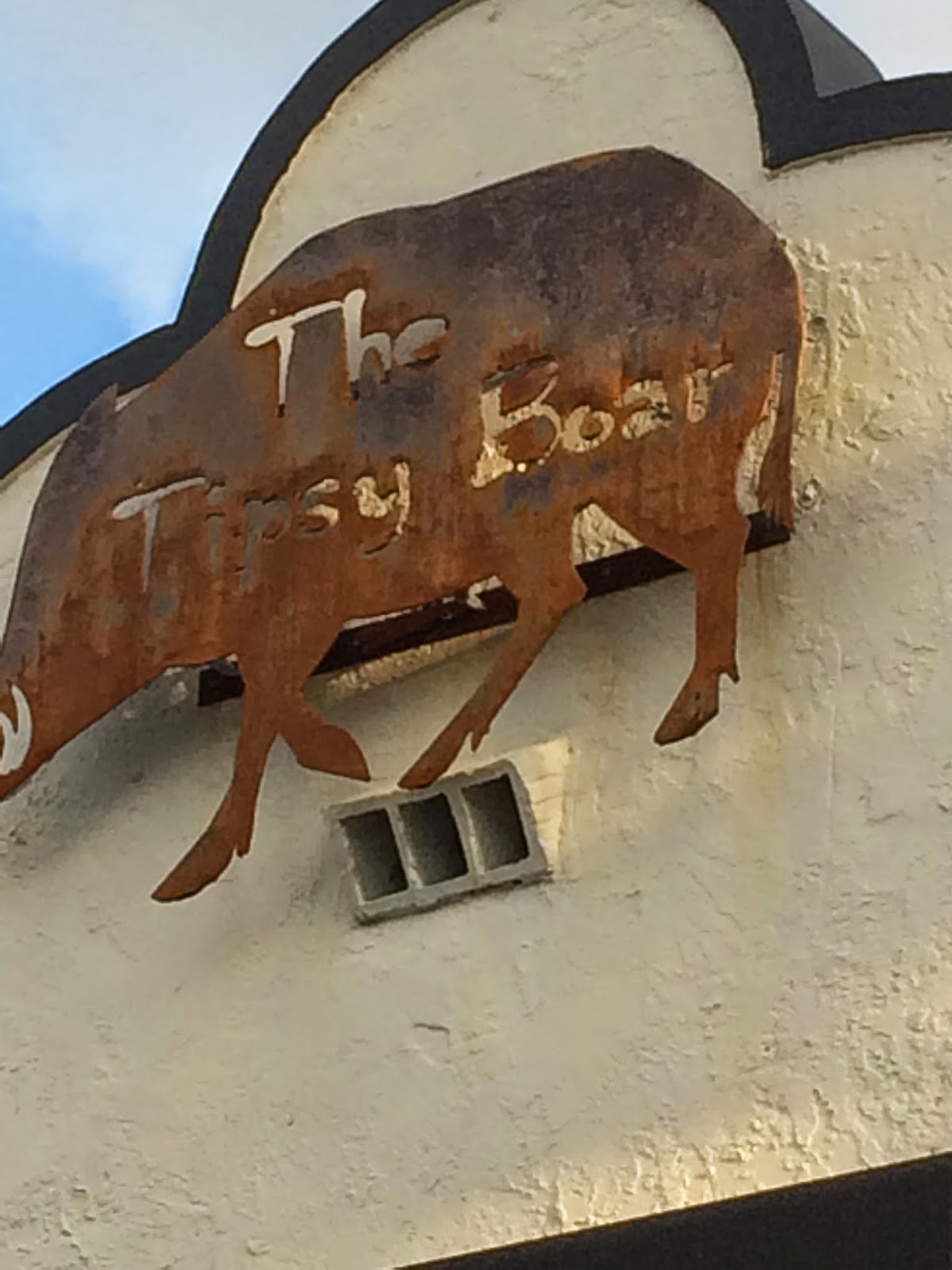 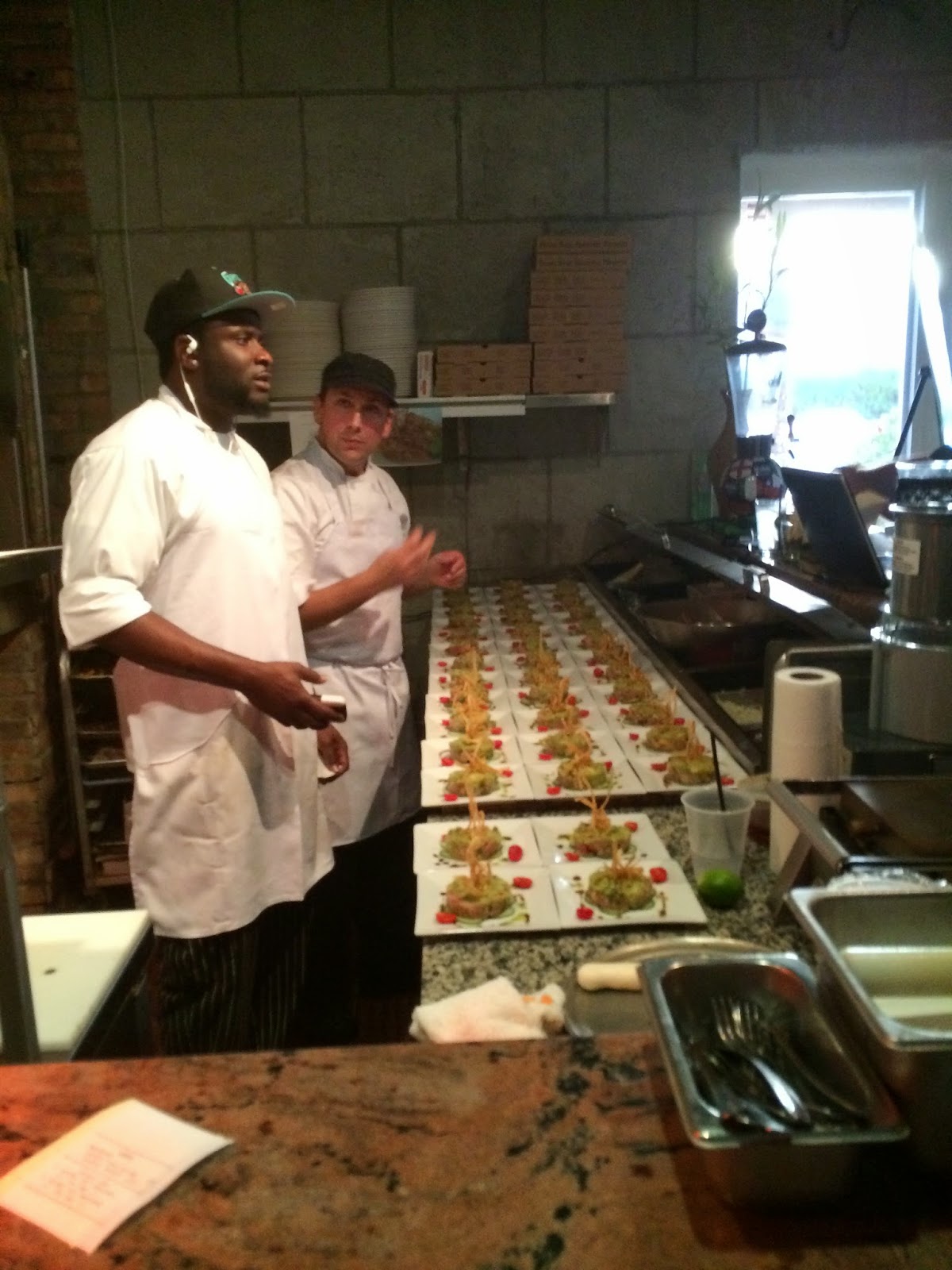 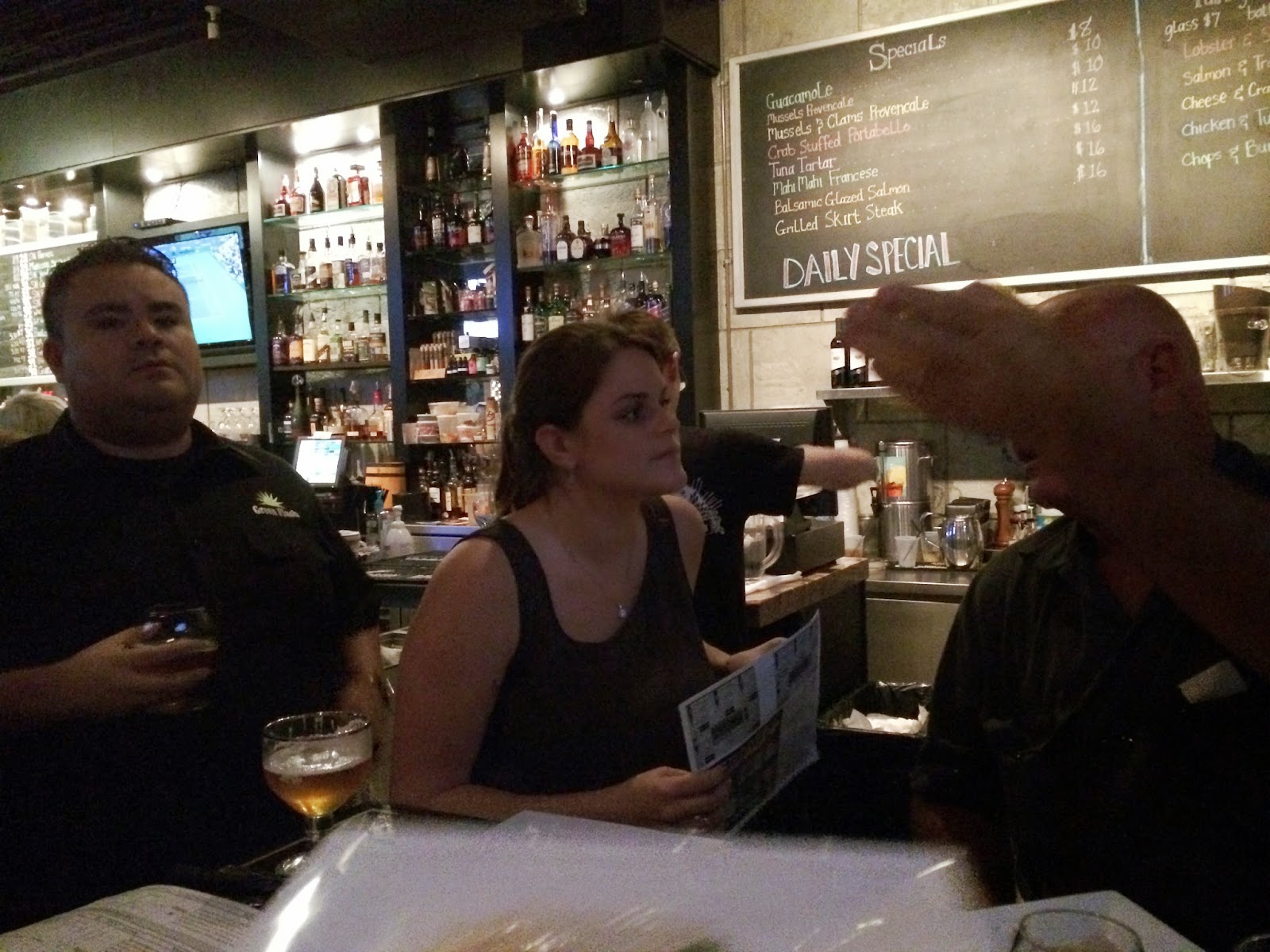 Posted by Beer Drinker Rob at 7:00 AM