I told you a few days ago to join me at the CrafterNoon Delight Whiskey and Craft Beer Fest! I hope you complied! Even after circling the block a few times trying to figure out Mary Brickell Village parking, my wife and I were 20 minutes early. But you know what? Early bird does catch the worm, including some cool new t-shirts, caps, money clips and GREAT photo ops!

I think the organizers of the event plan on having similar regular festivals, but this was to be the first. There were around 15 beer vendors and five or six in the whiskey category. That might not sound like a lot to you, but seriously, our whiskey "punch cards" (we were allowed 10 spirits samples and unlimited beer samples) went very much unfinished! 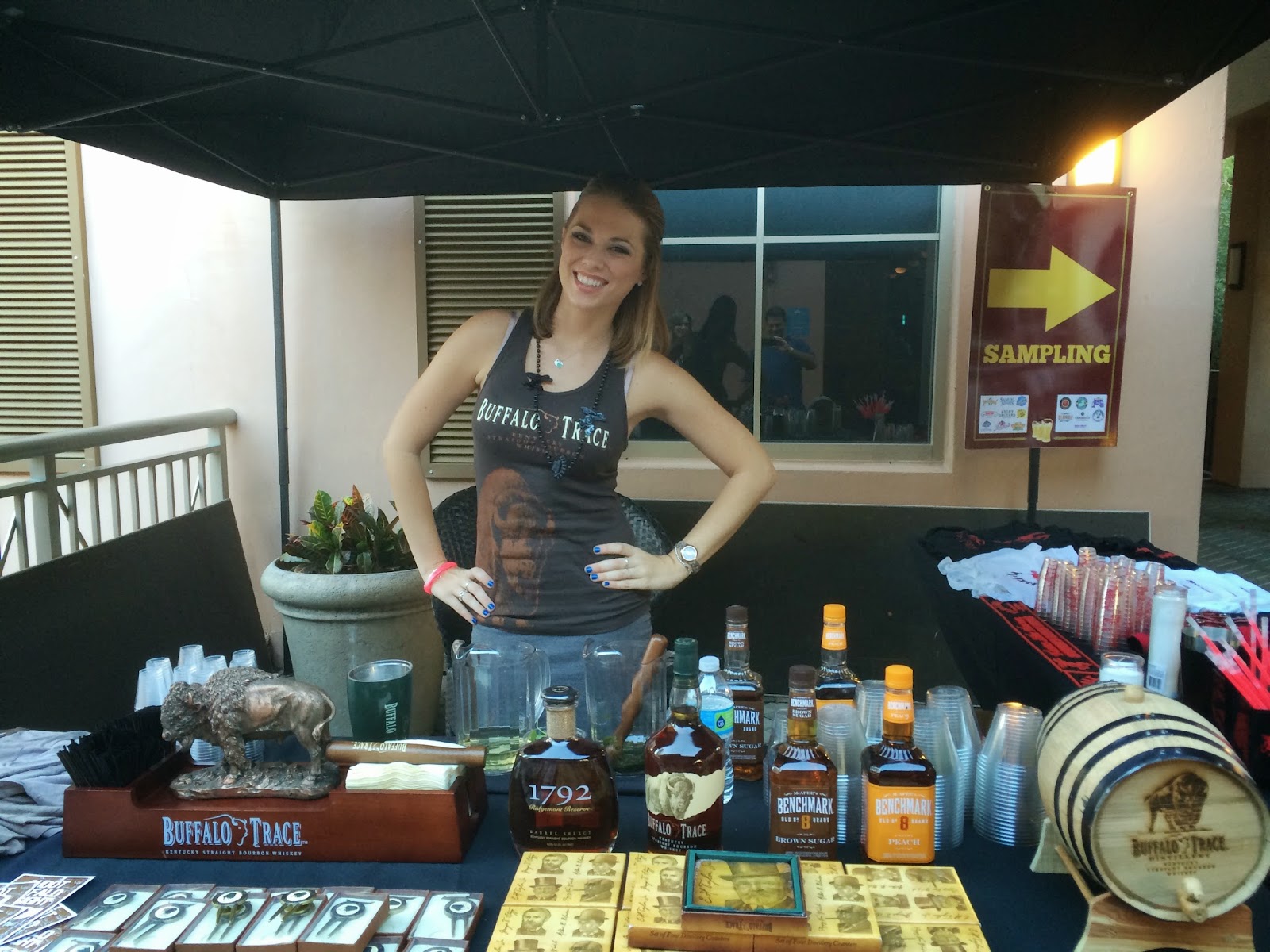 I told my wife we were going to start upstairs where all the spirits were located. And Buffalo Trace was an awesome first stop! The representative there was very knowledgeable and gave me a terrific first sip, while making my wife a cocktail with their Benchmark Peach. We each left with a new t-shirt (I wore mine the entire night) and a few other goodies! Mmm. Buffalo Trace Bourbon!

Next stop, the Jameson table for a taste of their new Black Barrel Irish Whiskey. As you can see below, the Jameson woman and I sipped whiskey and watched the sun set together! She and her coworker told us about the new spirit, with the Black referring to a double charred barrel used for the aging process. Was funny, too, as the Jameson woman turned the situation around and took our photo! Should be top of Google Images by now! 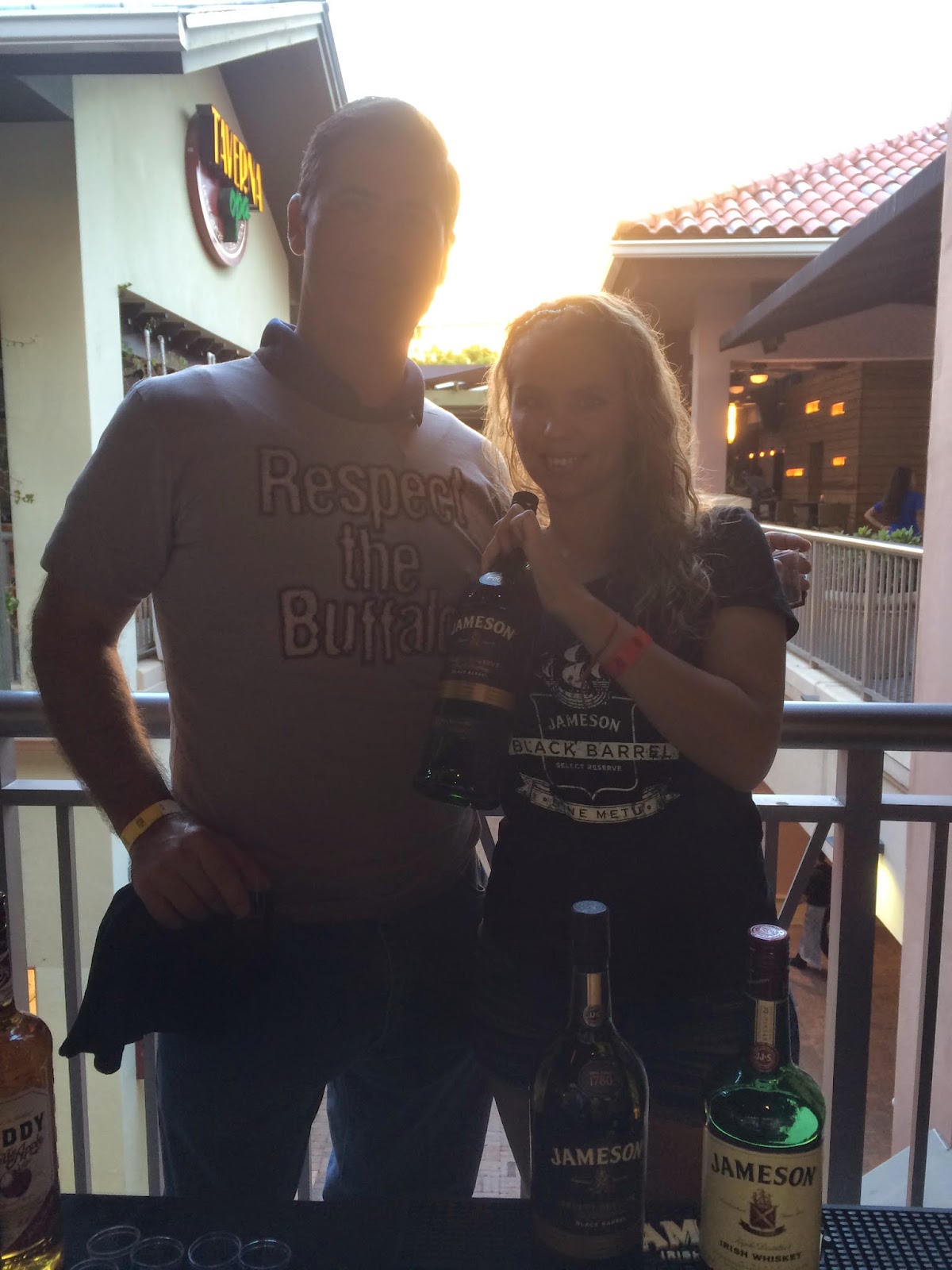 Still sticking with bourbons, I headed straight toward a favorite brand... Bulleit! My wife and I each got a new Bulleit Bourbon cap and a helluva tasting. I asked for the Bulleit Rye and my wife decided to check out the bourbon. But after a sip, she took mine and totally fell in love with the perfumey, smooth rye. And it was a perfect swap as I preferred the bourbon. At the same table, I also tried a great George Dickel Tennessee Whiskey, very smooth!

At the adjoining table, we tasted some new Crown Royal and Johnnie Walker offerings. Apparently there are some new whiskeys, and the color scheme for Johnnie Walker has been shaken up recently. We tried Johnnie Walker Platinum, a really nice new blend. I tried it neat though I thought it was really awesome with one cube of ice! 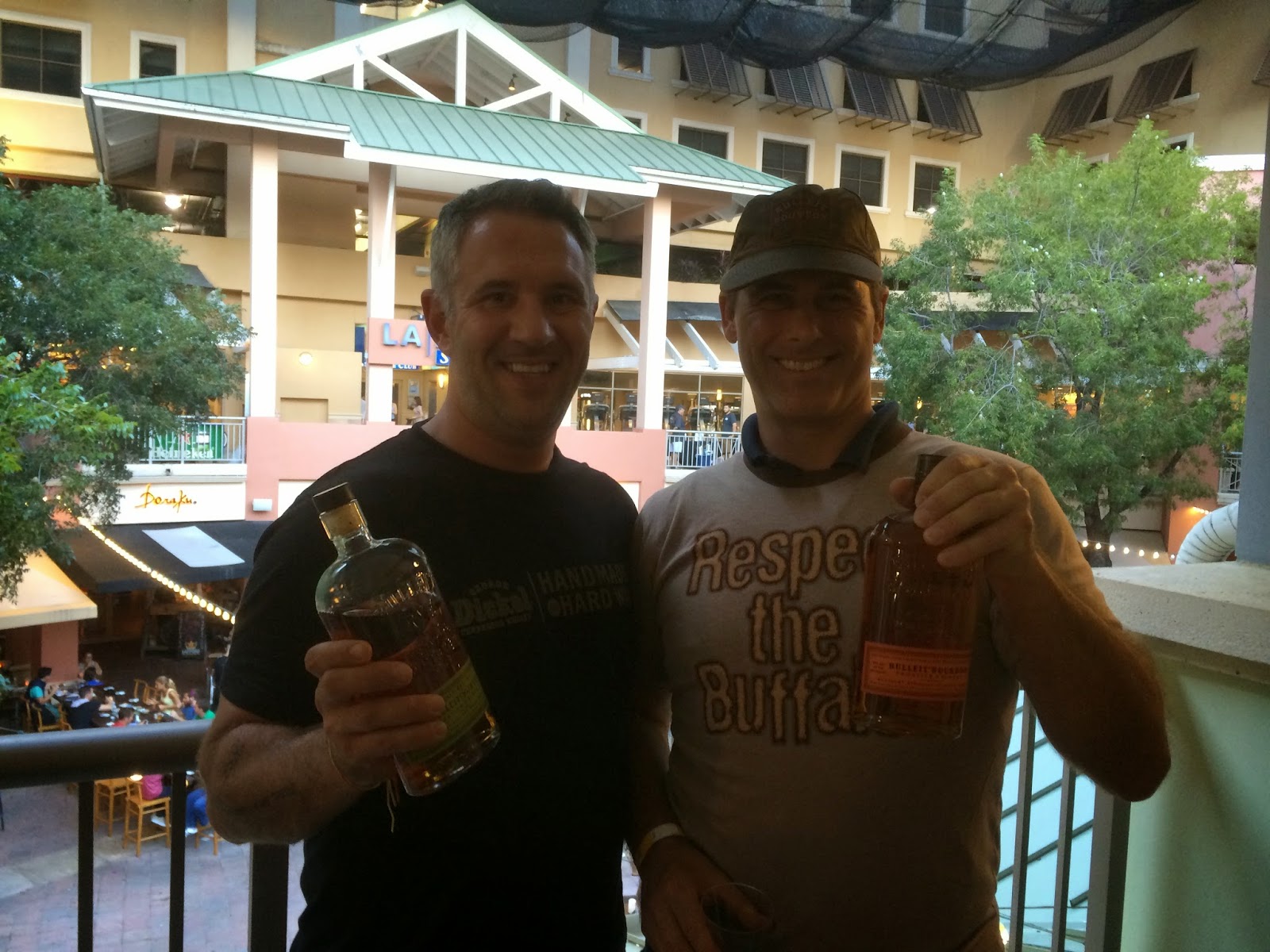 We then hit the Anchor Distilling table. Anchor is an awesome beer brand but you'd be surprised how many spirits options they have. I loved trying Junipero Gin another night, but at this event I tried KaVaLan Whisky from Taiwan. Was really terrific!

My wife was already worn out from the whiskey portion of the event, so we decided to check out the beer vendors for a change. Down the steps to the entrance (remember this was all outside, among dozens of other businesses open and doing business), we checked out our first beer table. None better than Guinness! But what is this Guinness Blonde they had to offer (no, not the model)? It was a nice beer, unlike the Guinness everyone knows, grainy, toast, fruit, pretty good! Do you think I look like a "typical dad" in the photo below (minus the power tools)? Just curious. 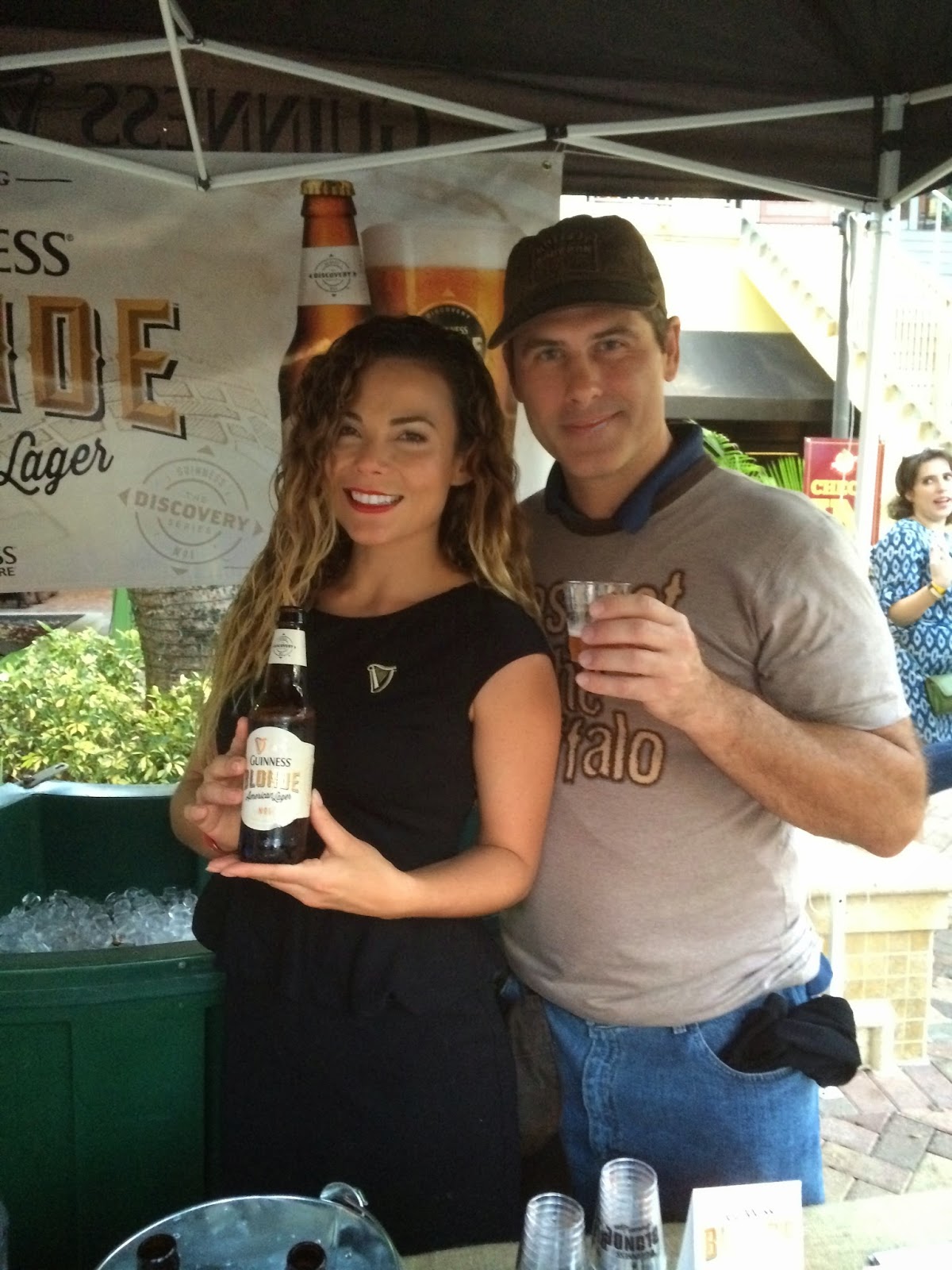 Out front by Guinness, SweetWater, Sierra Nevada, Samuel Adams and Abita showcased their beers. The new South Florida Sales Rep pouring SweetWater beers seemed jealous about missing their introduction to South Florida, but she did mention meeting Freddy, which made everything just fine! Freddy has a way of making that happen. I'm pretty sure we had our own 420 moment anyway.

Sierra Nevada was offering the beers from their new mixed winter pack (brrr 78° Miami night), including two new offerings. The coffee porter was great. They also had this year's Celebration Ale! It might have been whiskey fatigue, but it didn't seem that bitter this year. Could just be me, though I'm sure I'll check it out again soon when I'm fresh. 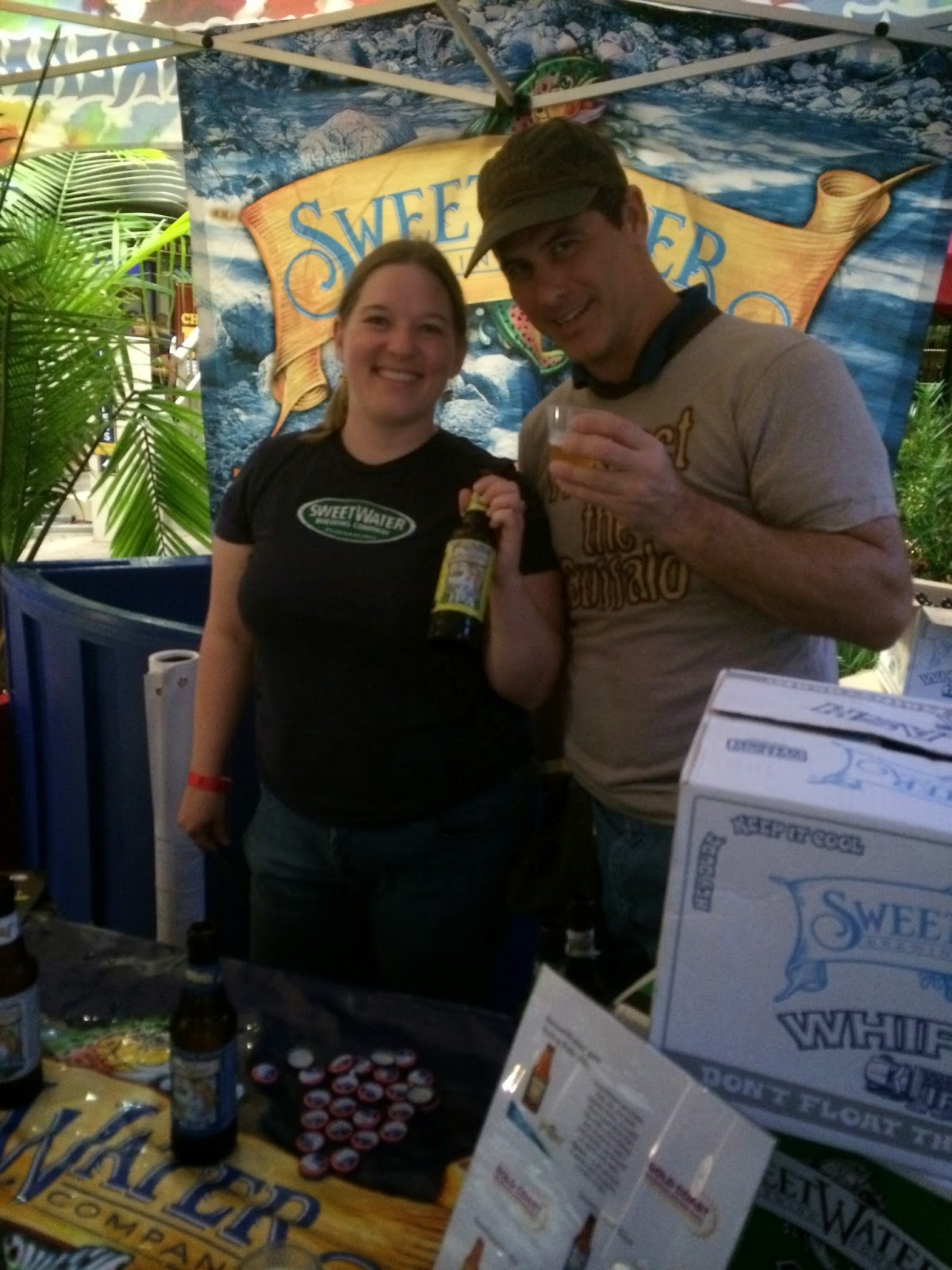 Abita was serving a new pilsner along with their AndyGator, both good options, while Sam Adams had a pumpkin shandy among a few other beers. Oh, and they also had fake mustaches from that same Curious Traveler brand. I had a few more shots of Celebration Ale before we moved our way back to the second floor, home to a bunch more beer brands!

We went through sponsor Fado's Irish Pub on the way back, checking out their really cool bar. If you look closely, you can see that Wynwood Brewing's La Rubia and Funky Buddha Floridian beers are on tap. Along with many other spirits options that make the Confession Box worthy of its name. Check out this bar! 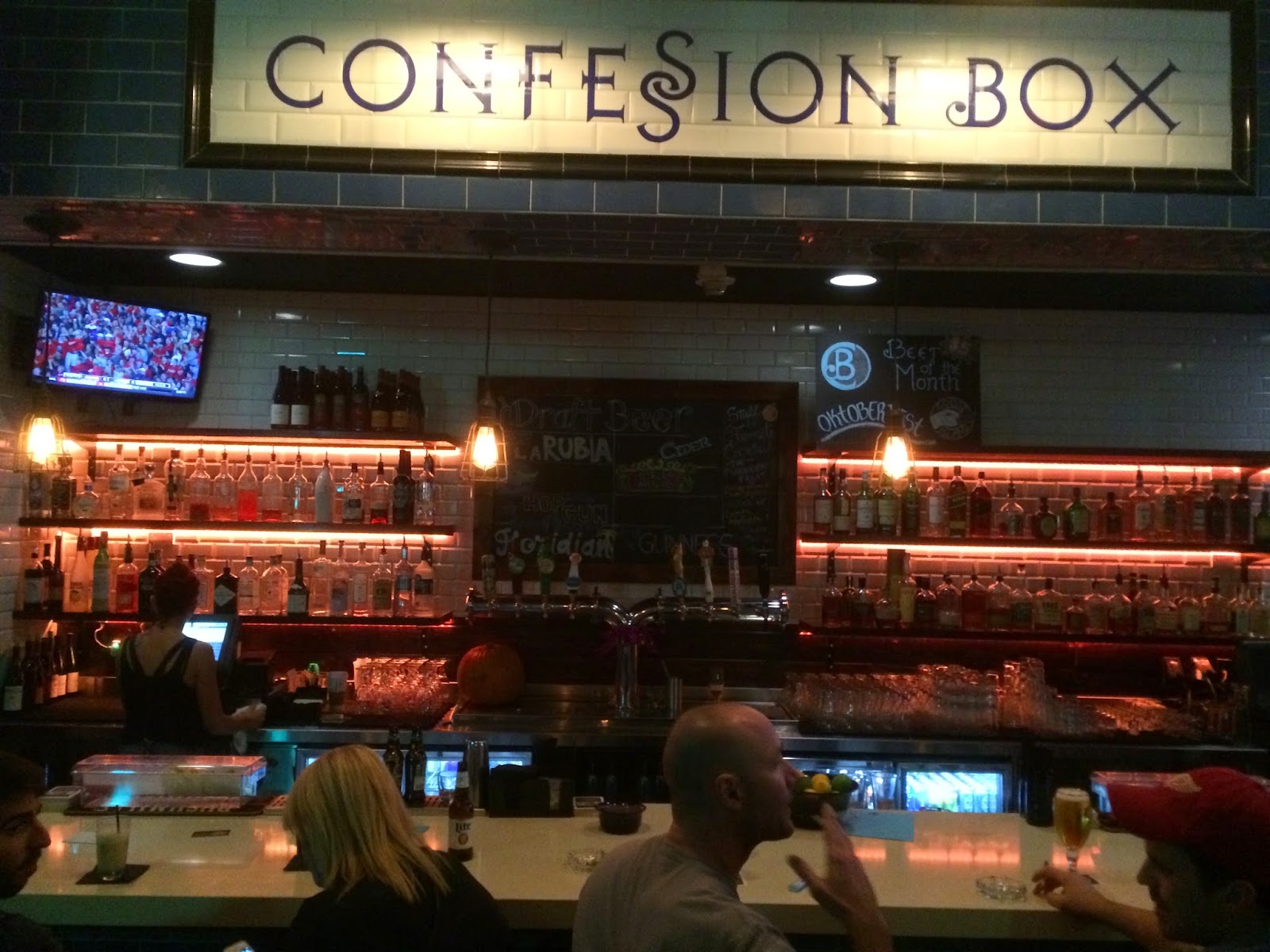 First stop on the second floor, Wynwood Brewing. Pops was there pouring a few beers. Yeah, Pops from the "Pop's Porter" that won GABF GOLD recently! Cigar City had Jai Alai on tap along with a few others, and Terrapin was there with Moo Hoo and some of their kick-ass IPAs.

Jessica from Duvel was there pouring the Duvel beers, and Duvel's newest brand Boulevard Brewing had its own table. Double-Wide IPA? Yes, please! It was pretty funny that half of this beer festival took place immediately outside an enormous LA Fitness. My guess is that many gym members said "fuck this" and joined us outside! 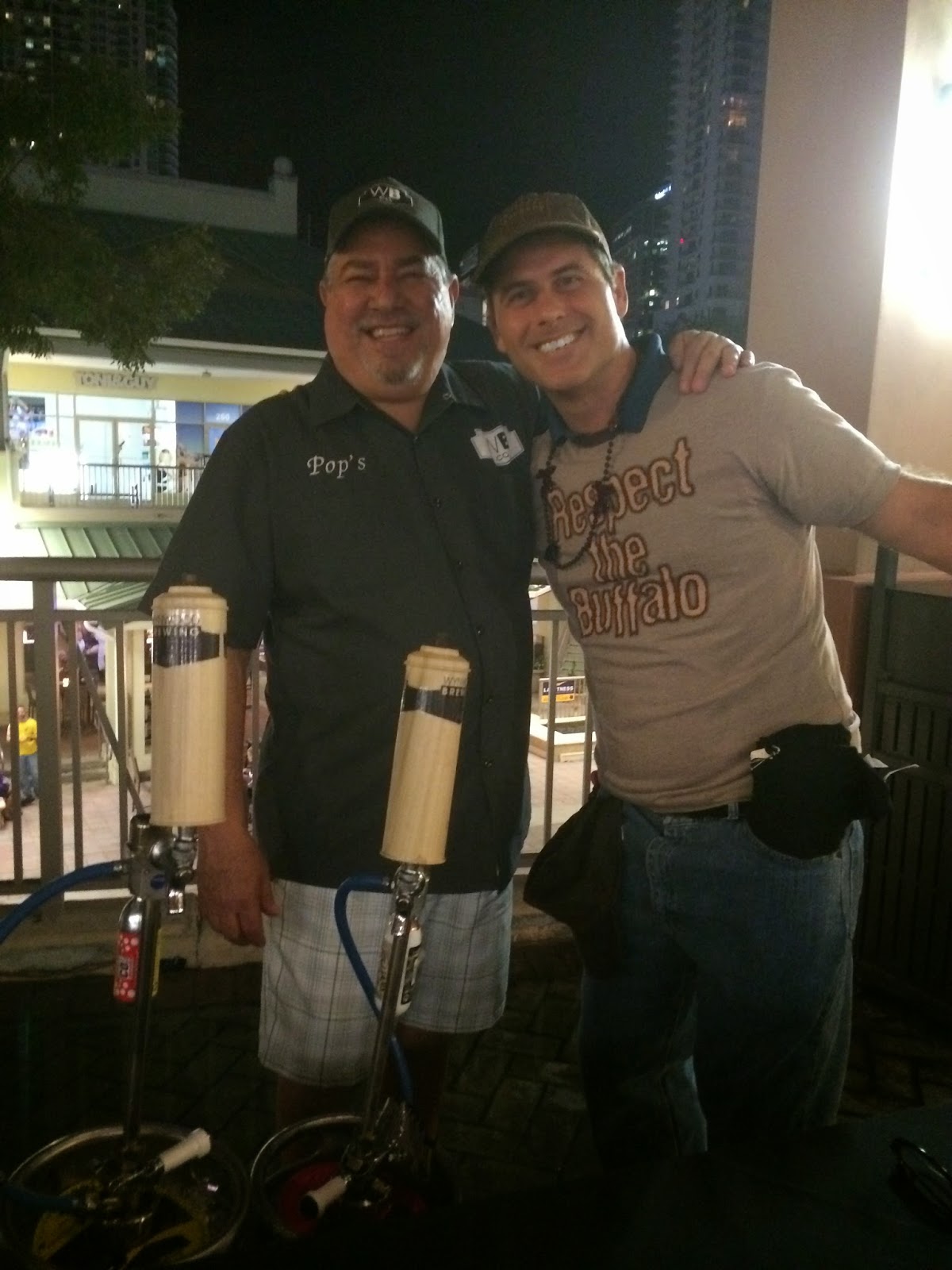 I took another handful of beer brand t-shirt photos too (you can see them below, not a separate post like usual). One guy recognized me from last year's Grovetoberfest, saying I took his pic in a Lagunitas shirt! Nice.

I hope that this concept takes off, regular beer and whiskey festivals. I think that beer and spirits totally complement each other. You don't need a lot of vendors, just quality. And if each treats the guests like at this event, the venture will be a total success. My wife and I Shook It Off by dining at a Brother Jimmy's Carolina Ribs in the mall. Good price, good people watching! Enjoy! 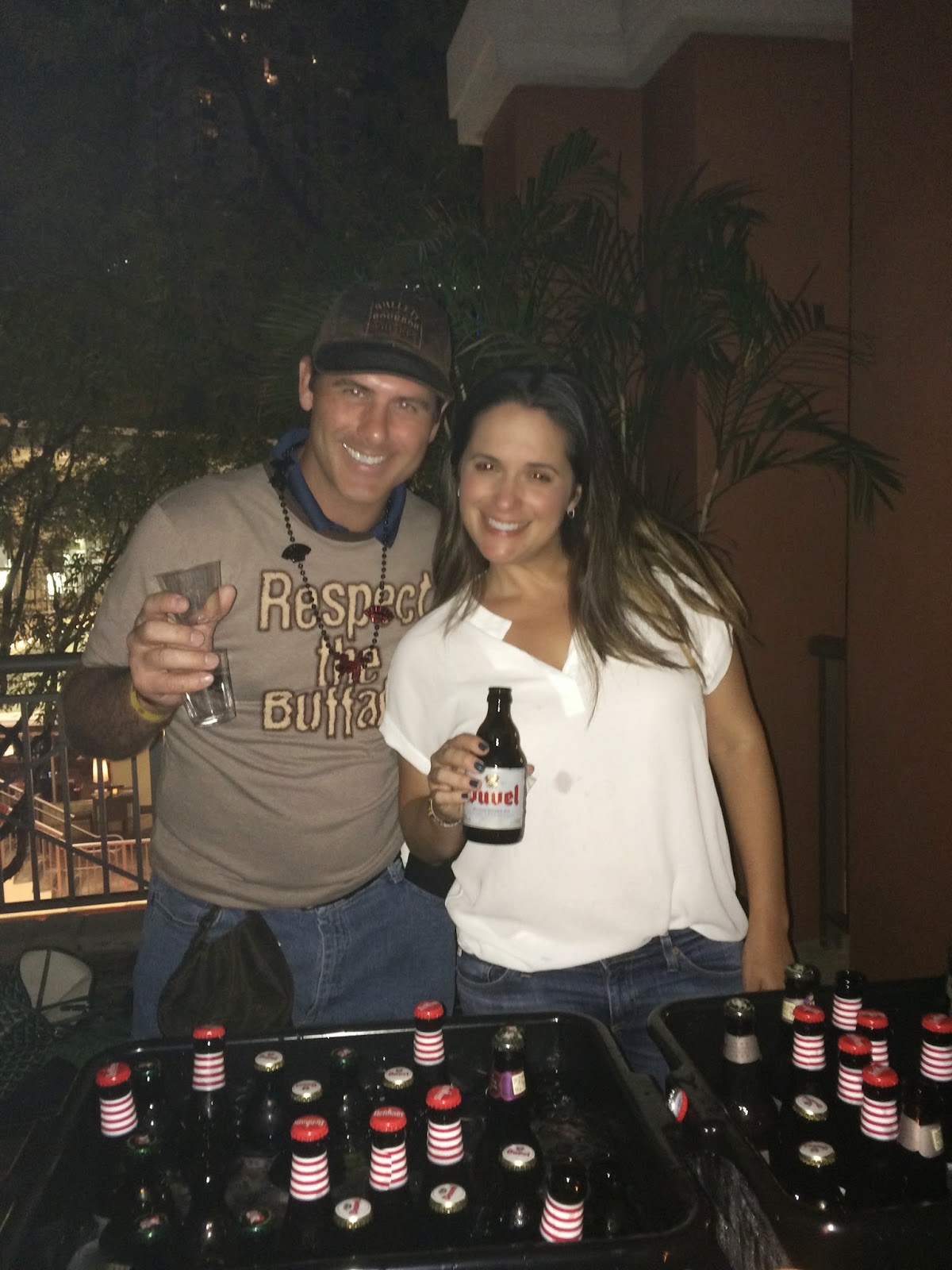 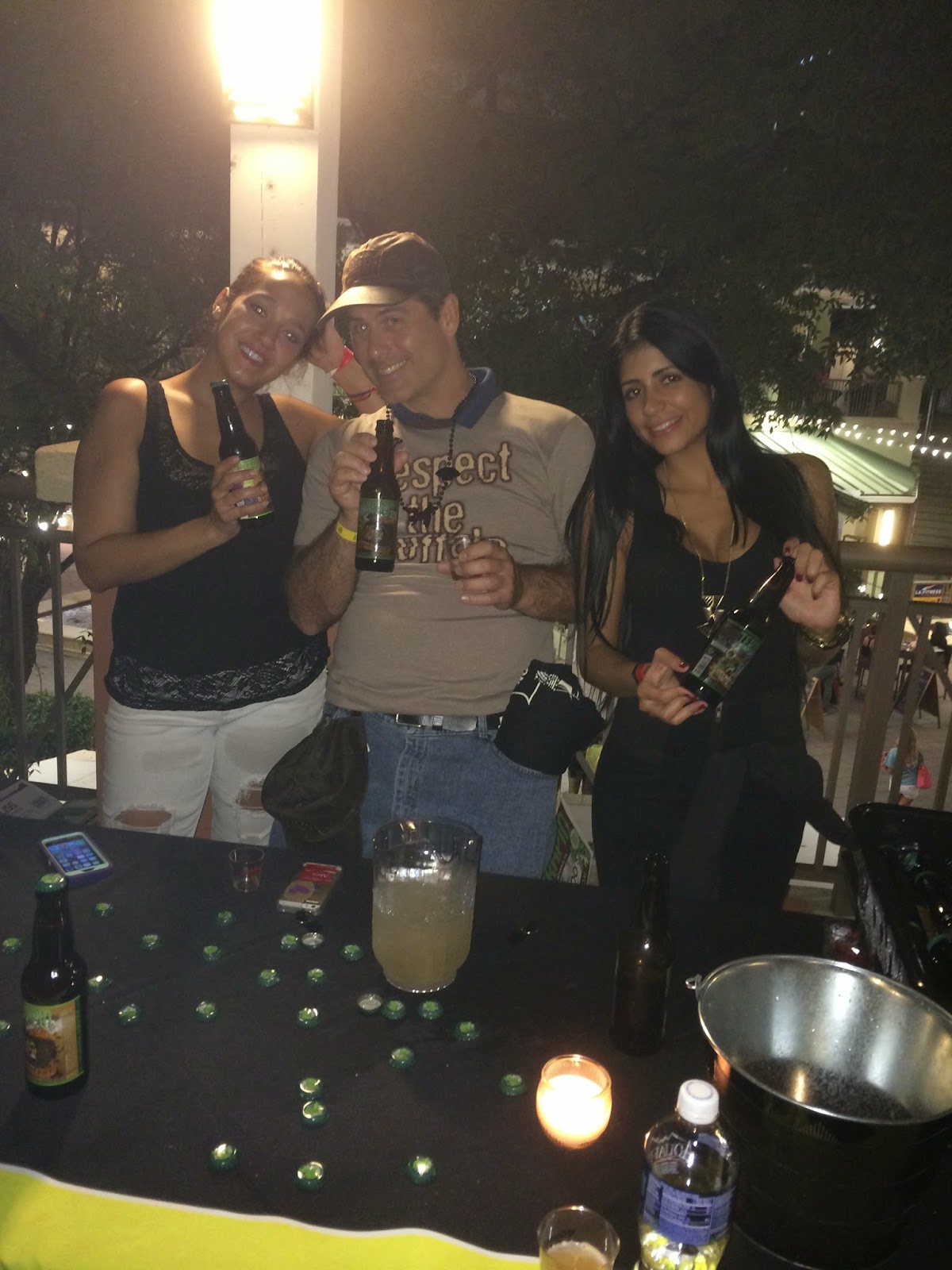 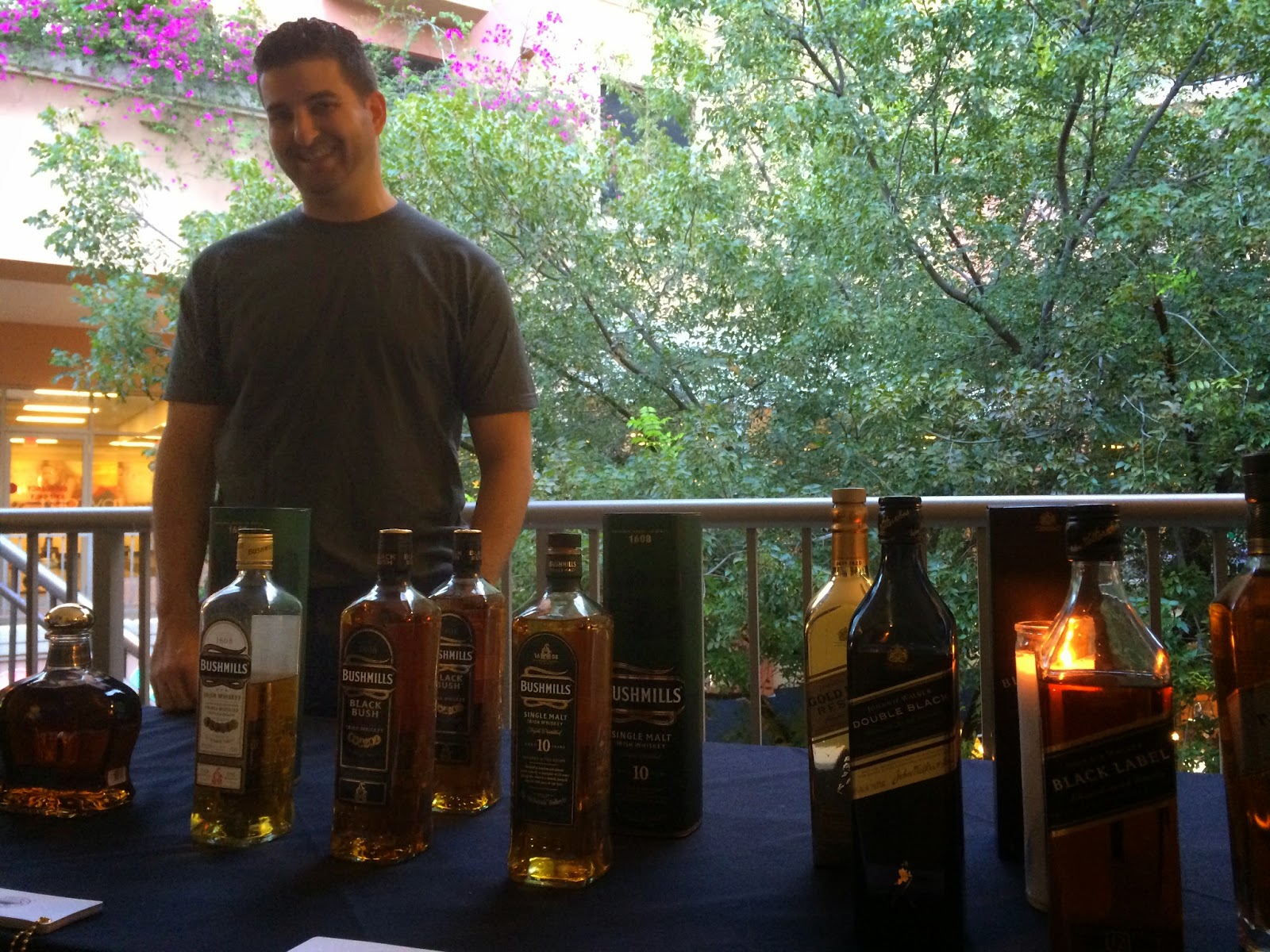 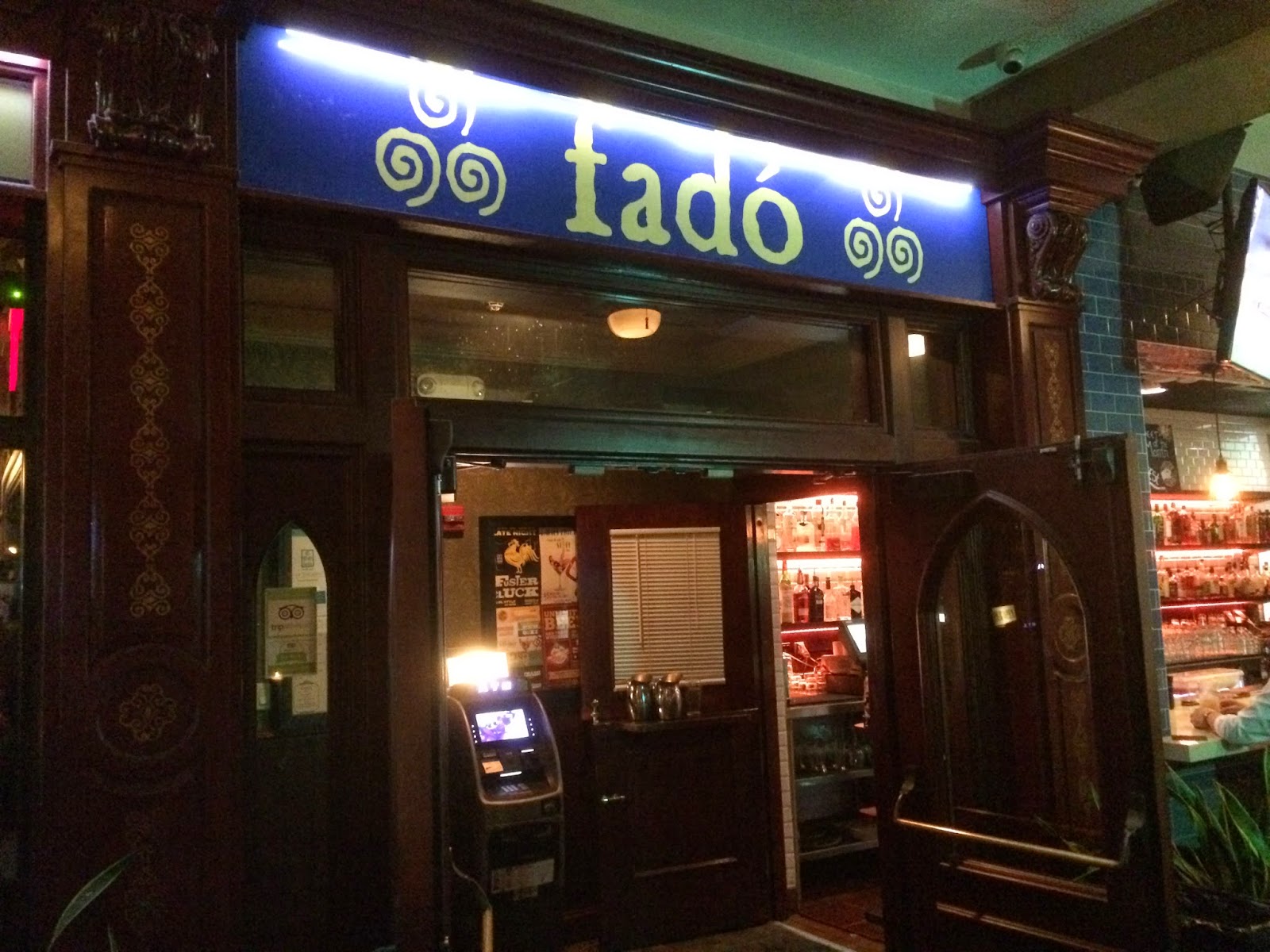 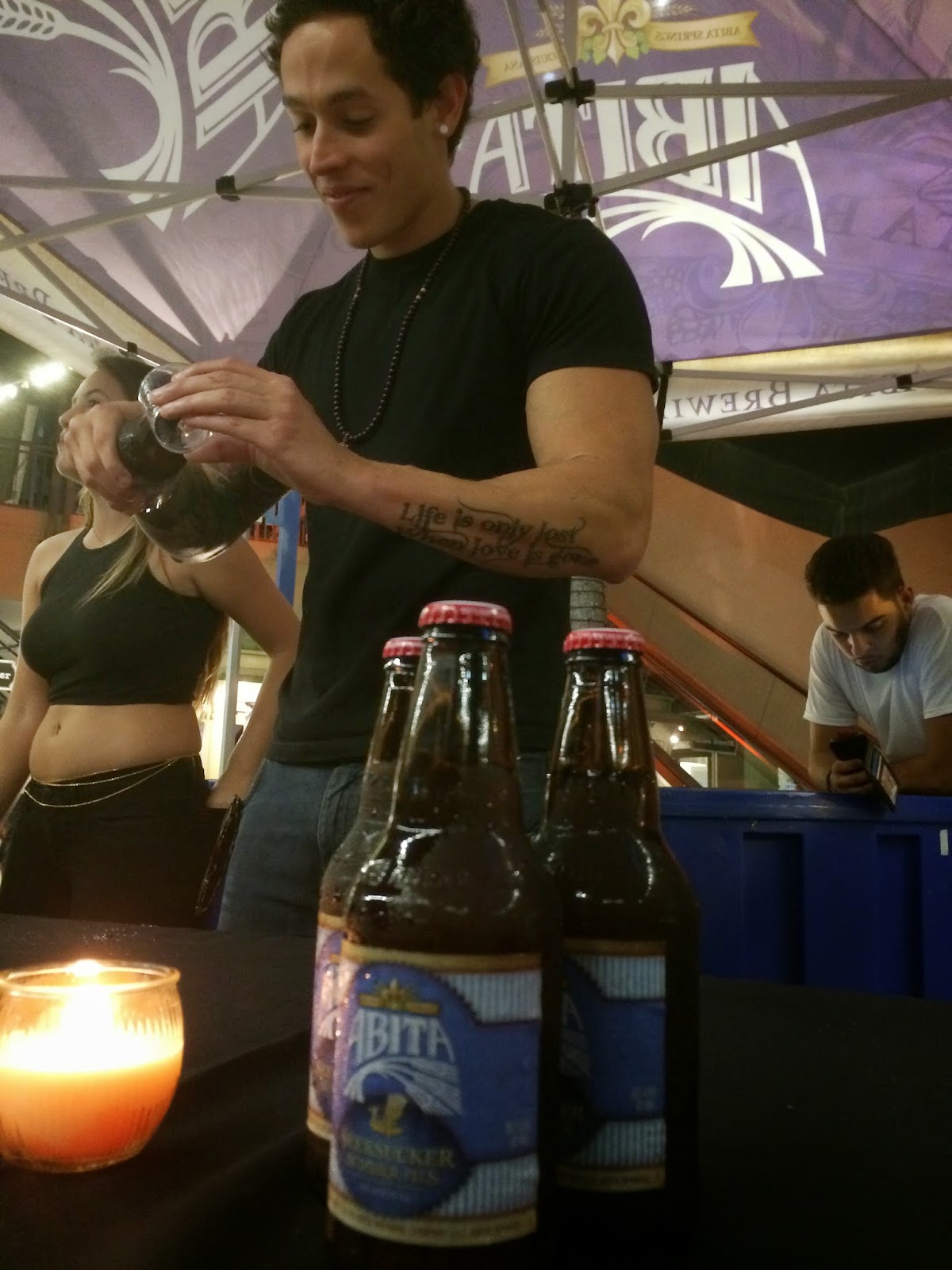 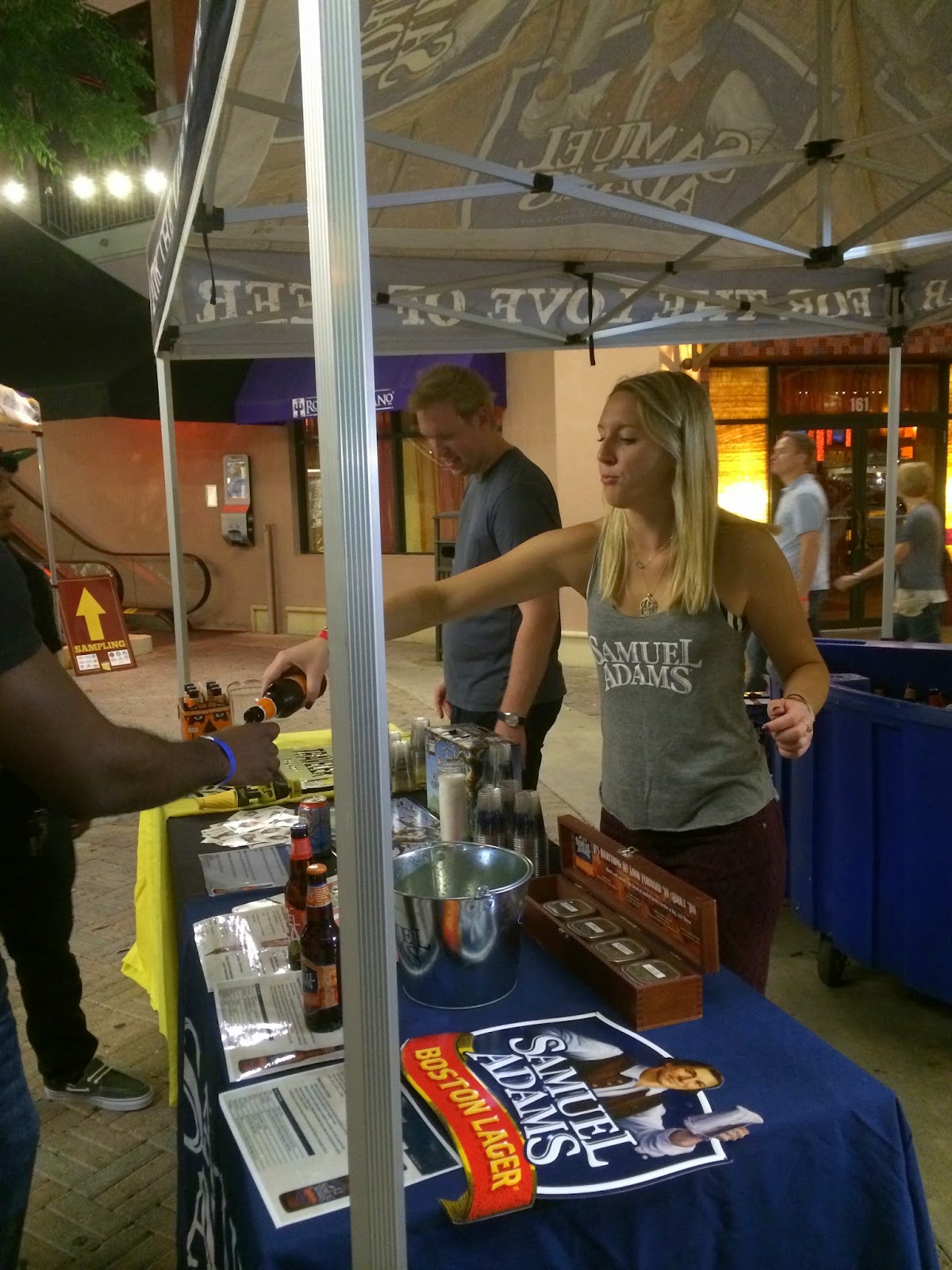 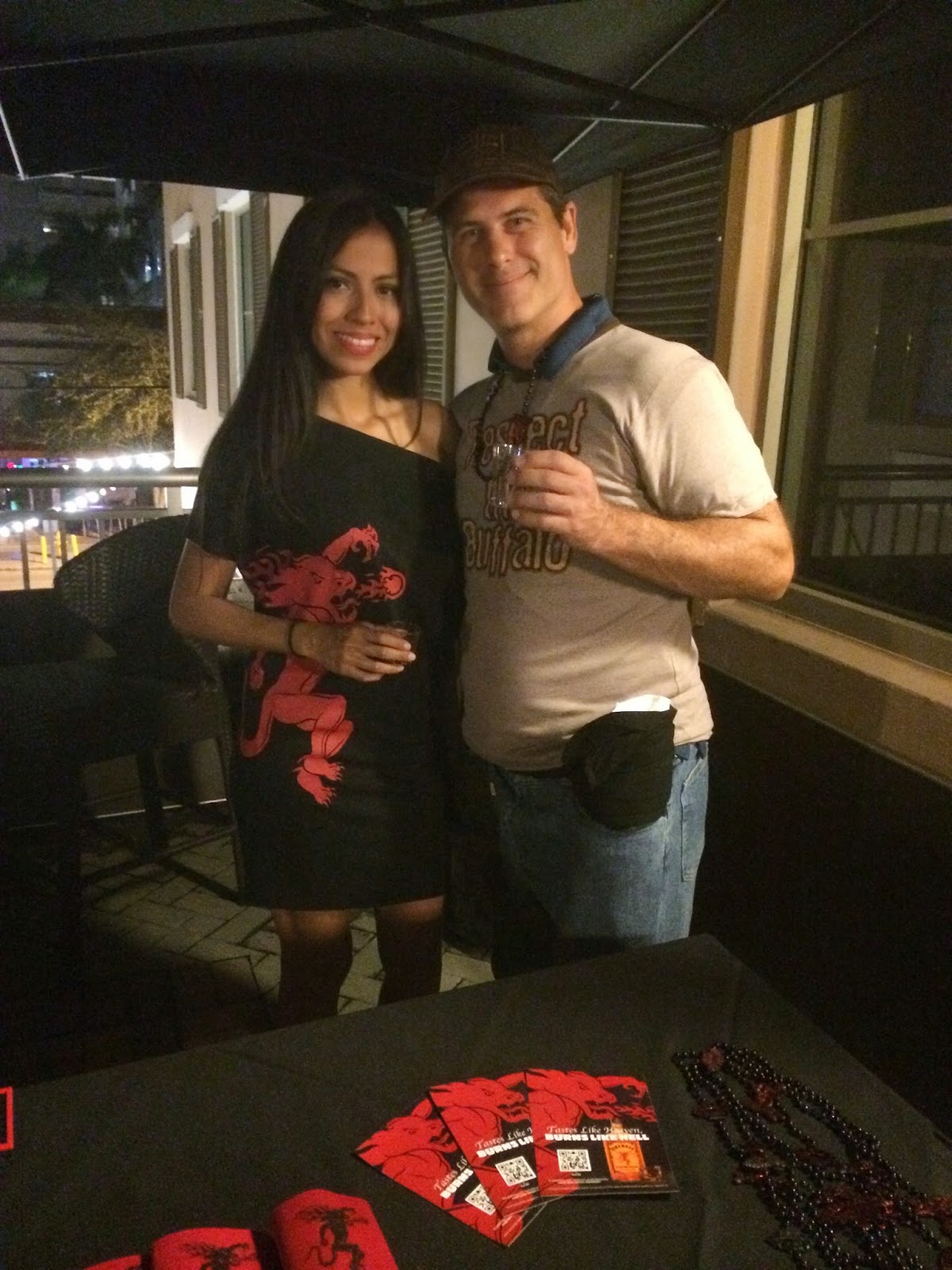 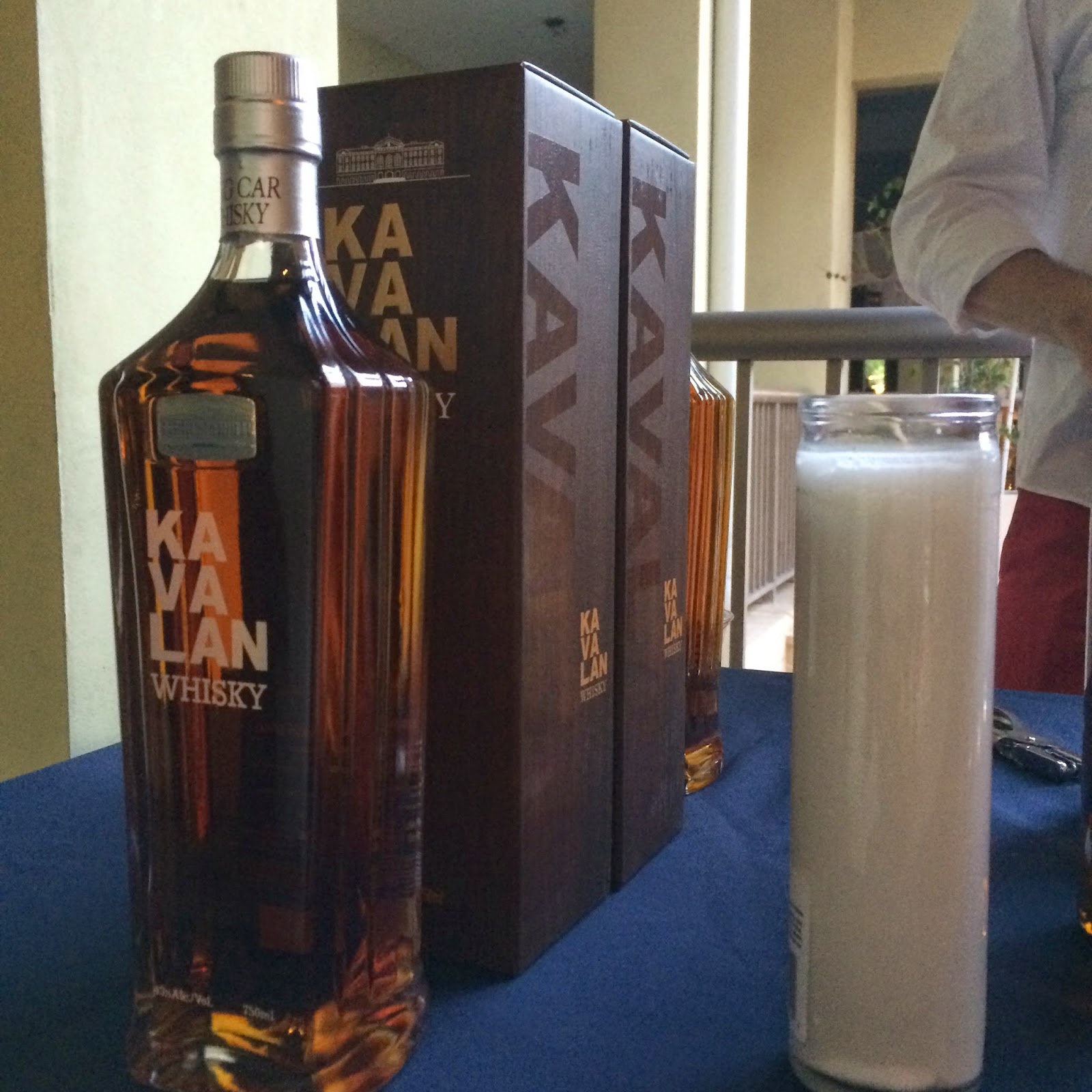 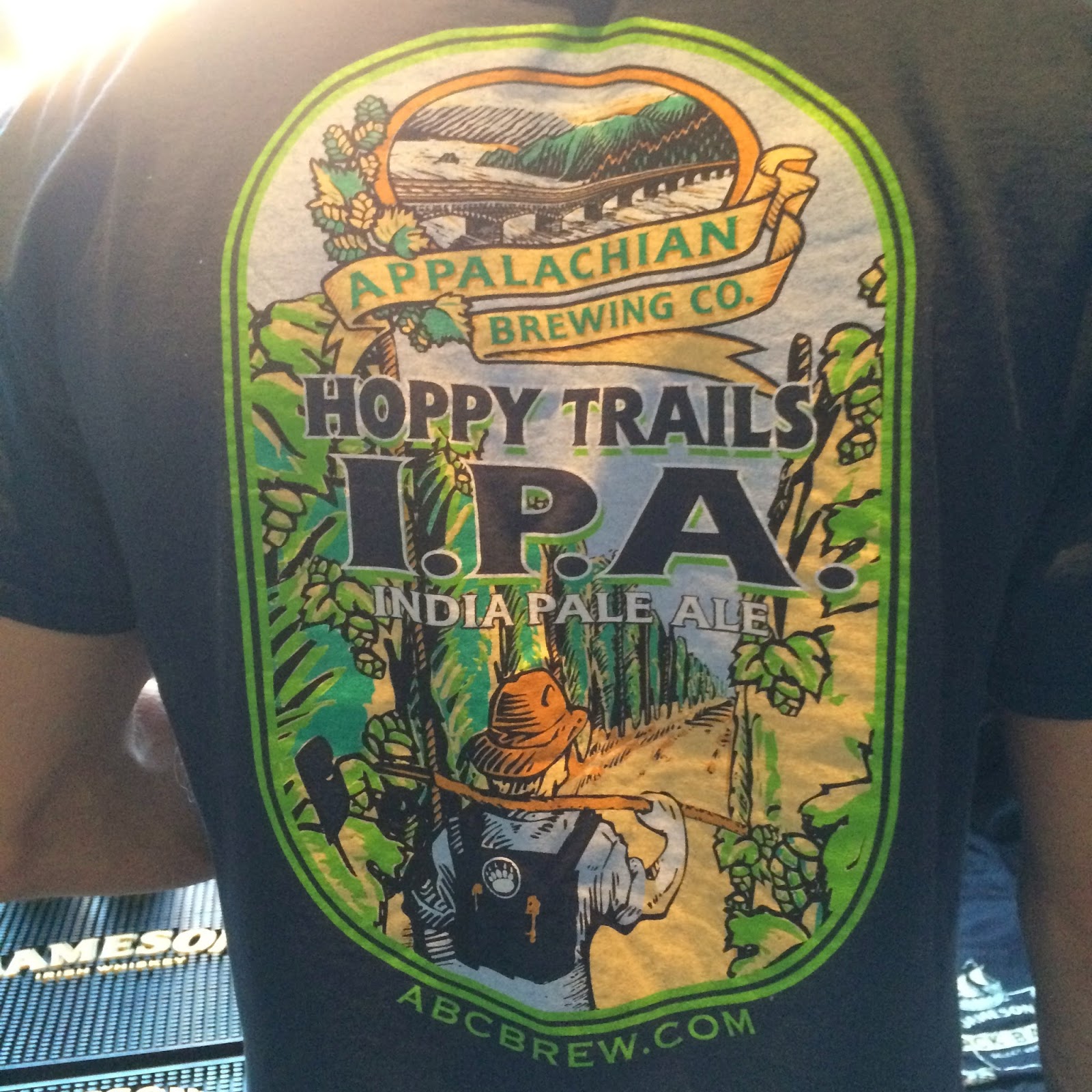 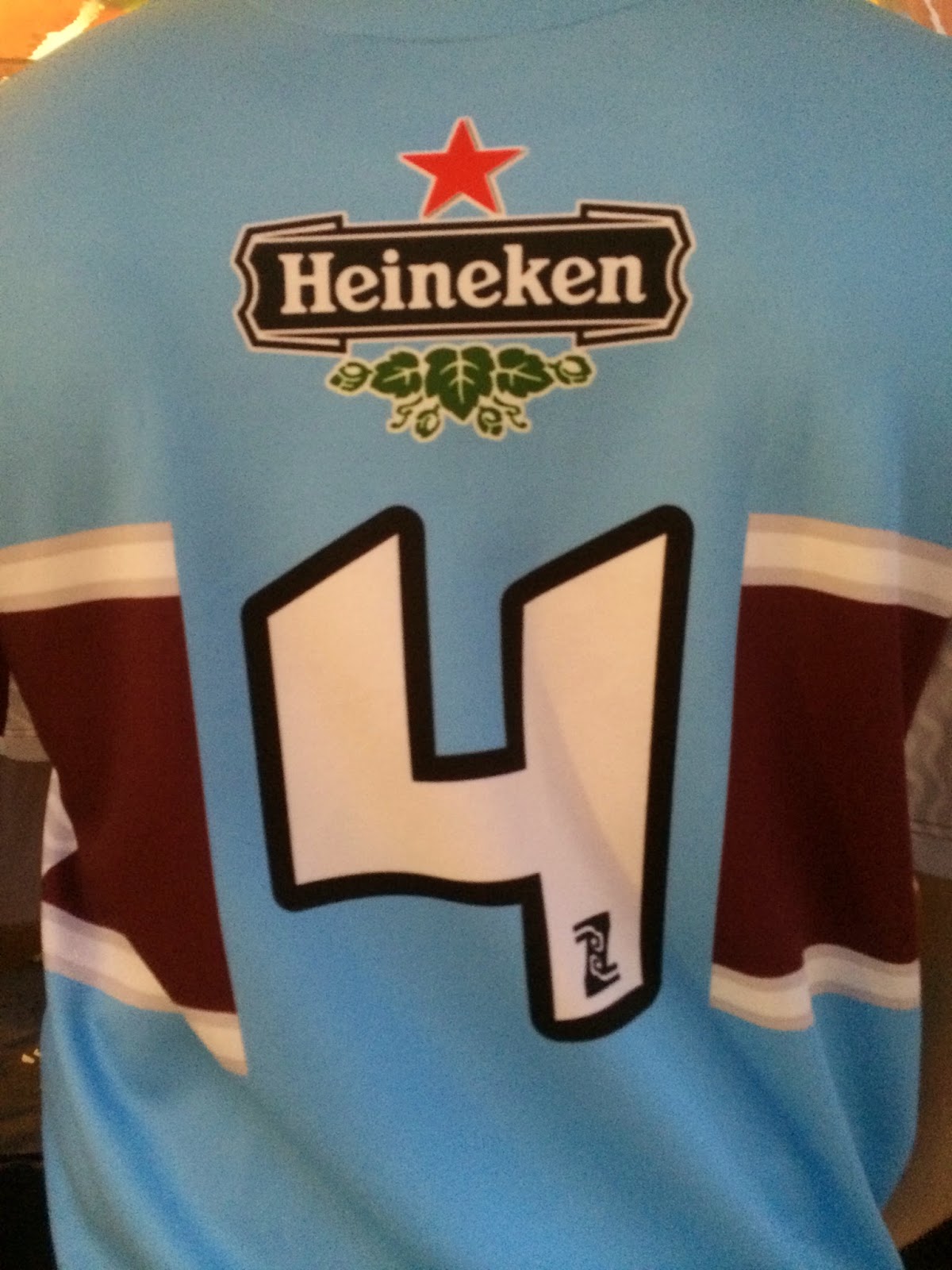 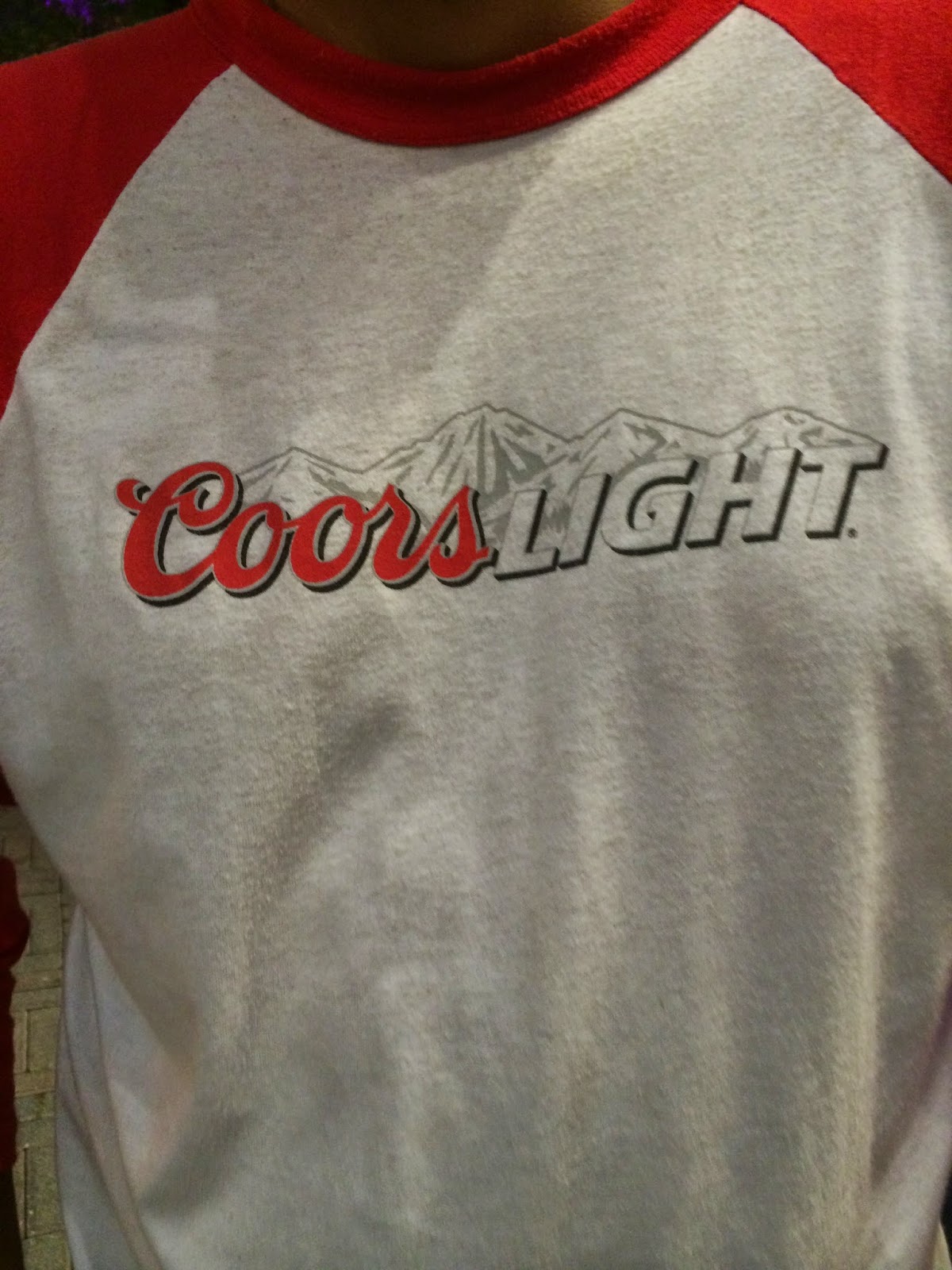 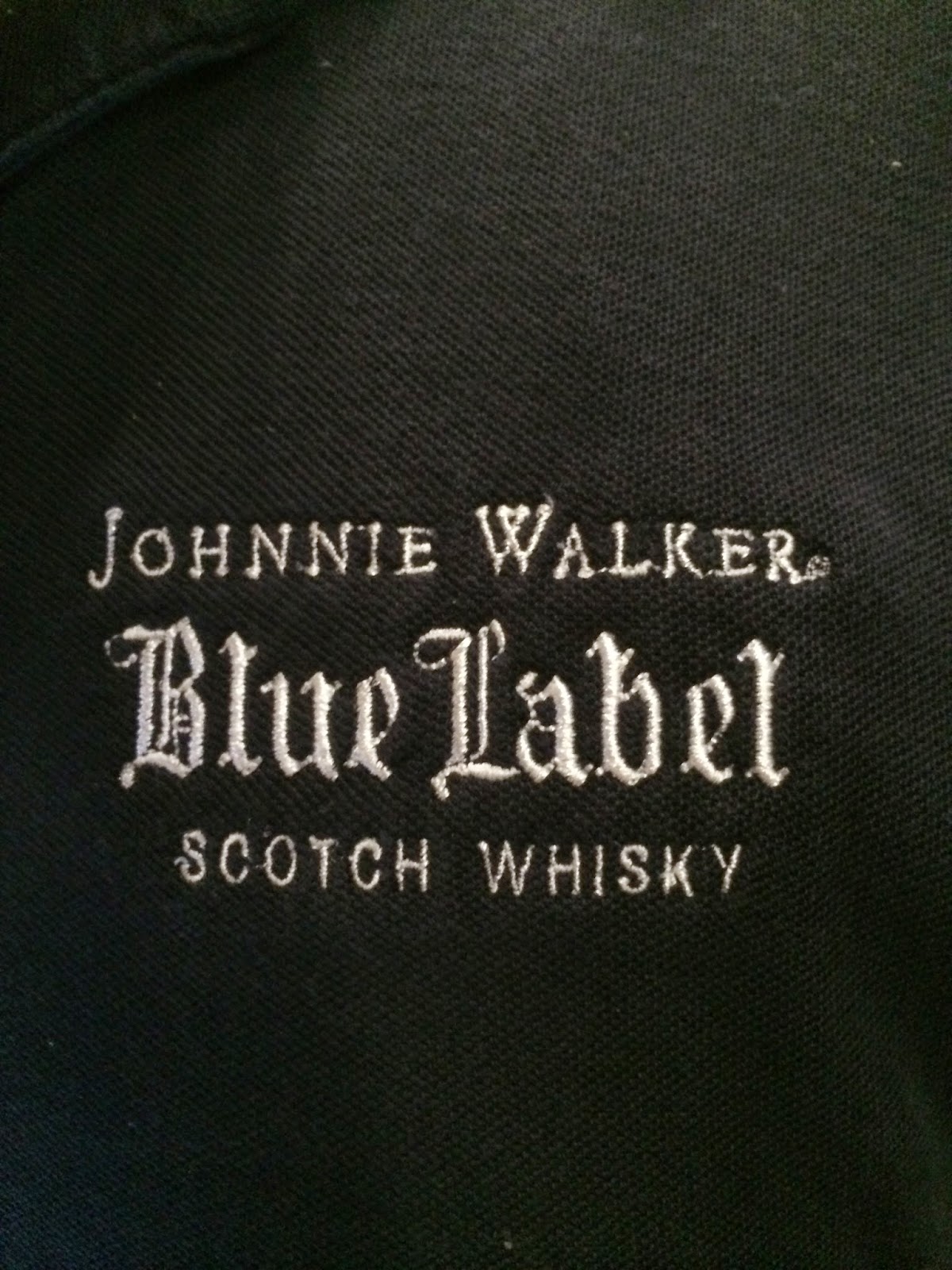 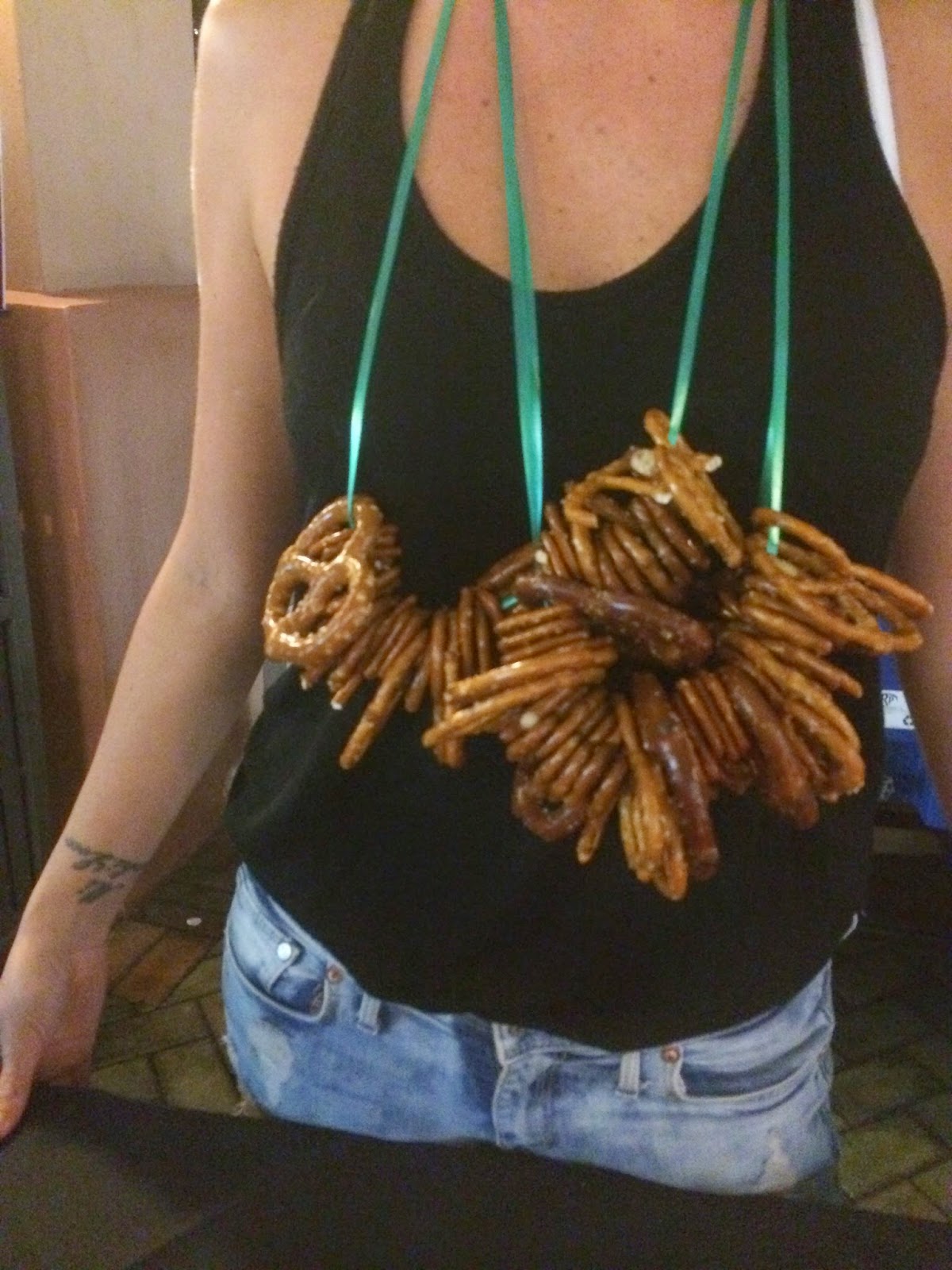 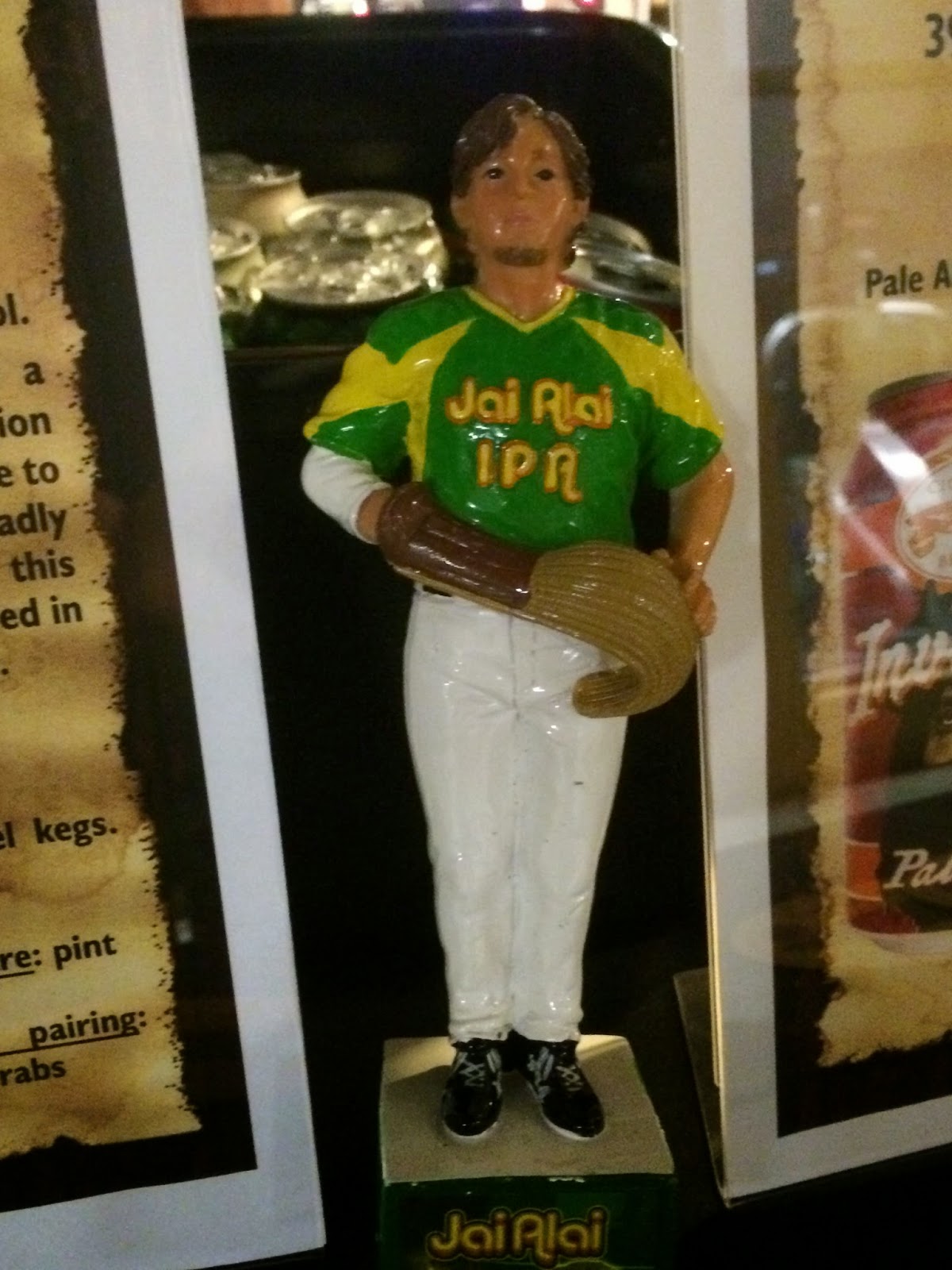 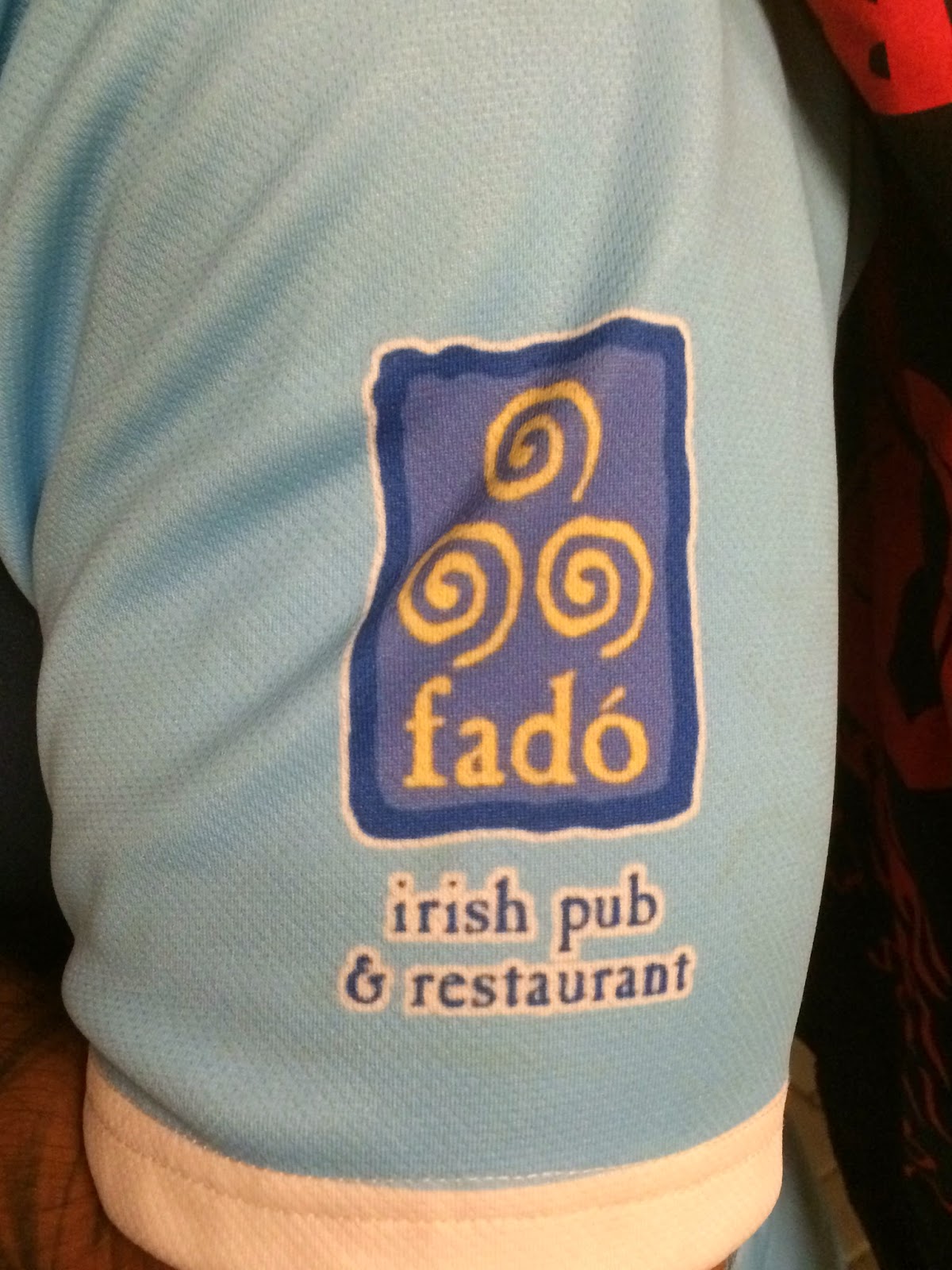 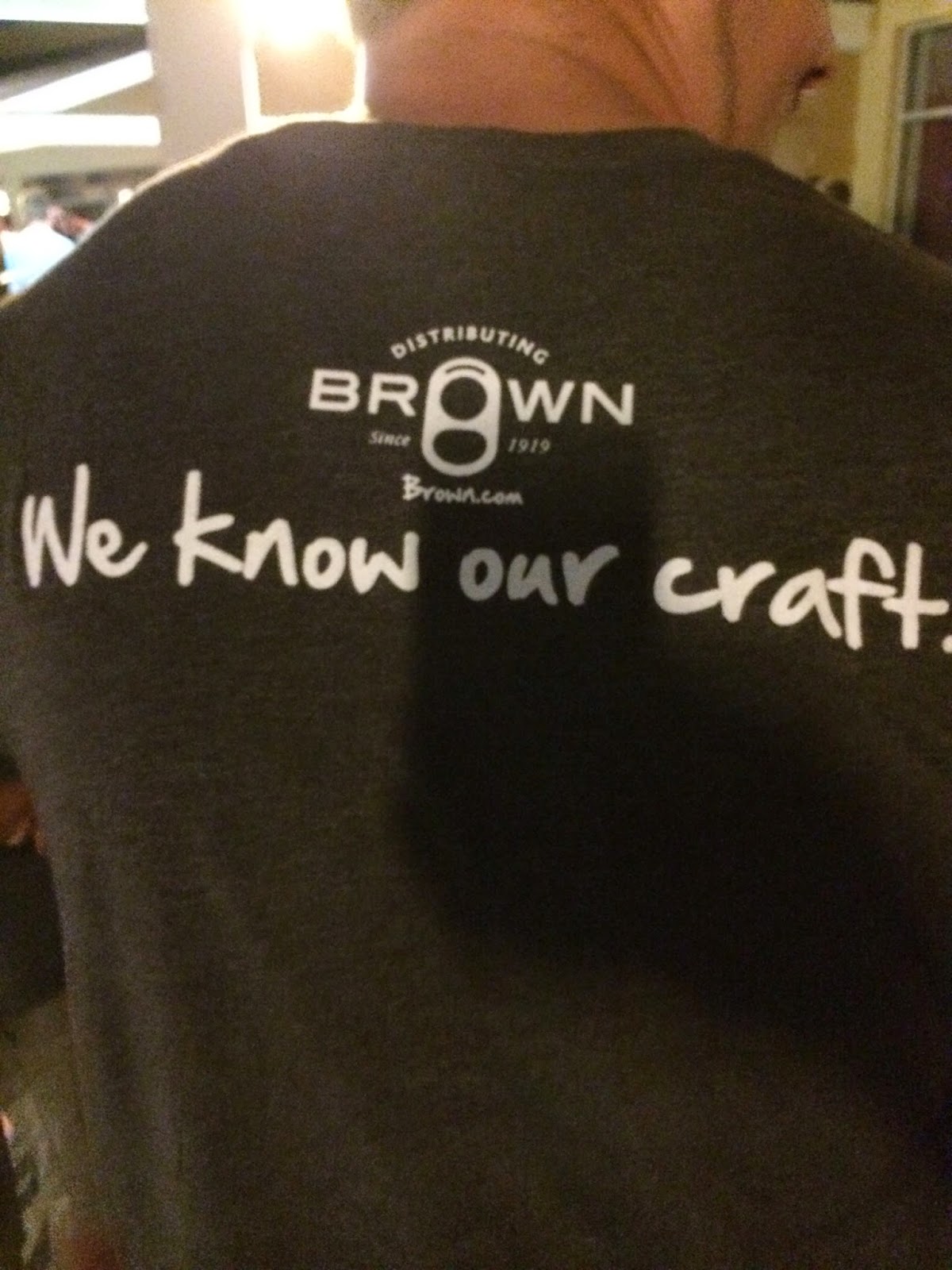 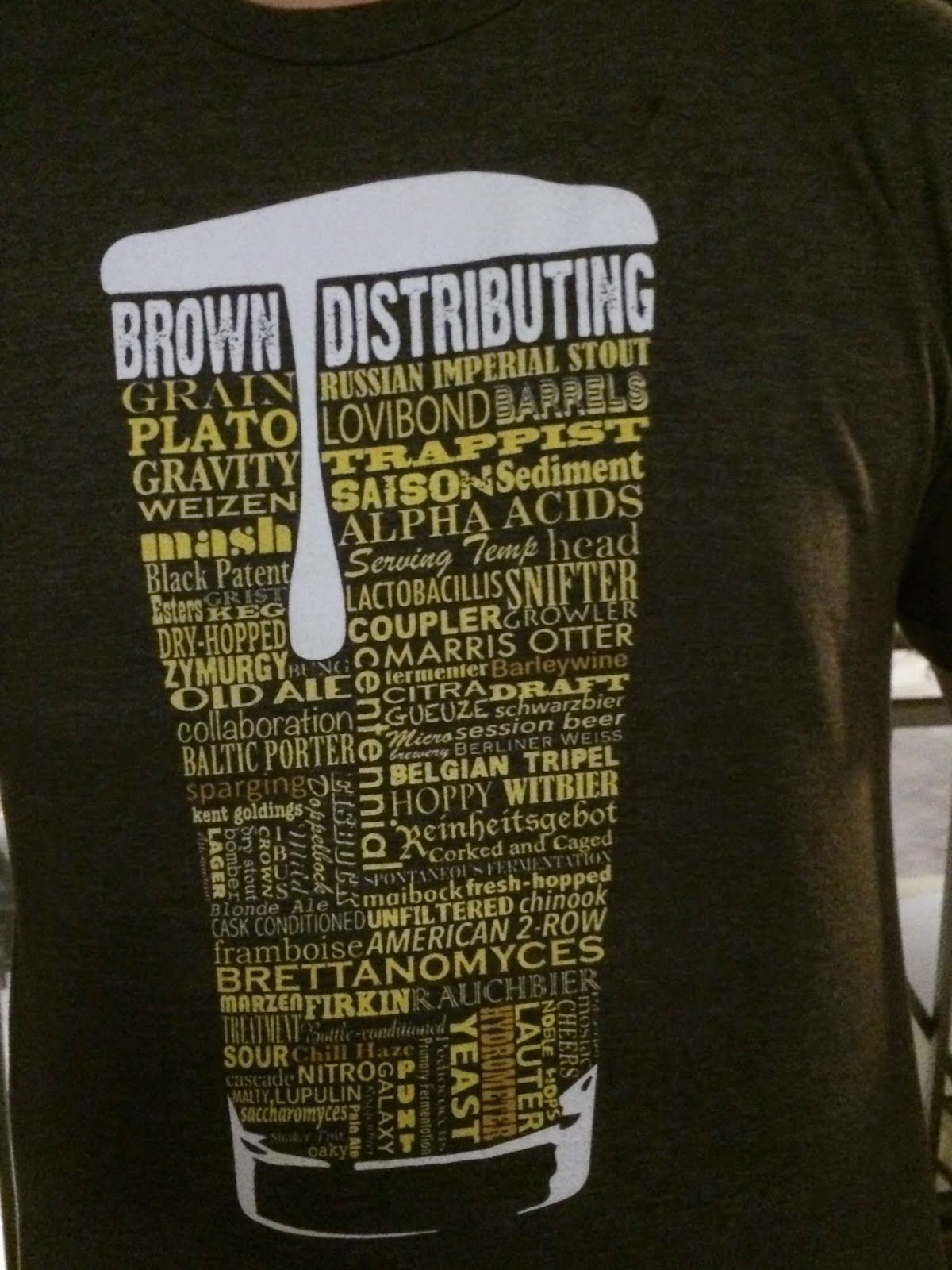 You do all the coolest things.

Hey Allen. Yeah this was pretty fun. Took longer to do the recap than the actual event though, LOL.

Haha! That's funny. I know what you mean, though. Maybe I will actually be close to an event like this one day. Or down in Fl seeing the sights. This traveling stuff gets intense :p

I am the new South Florida sales rep. :-)

Great recap of the event, glad y'all had fun!

OK, Jen. Should be factual now! See you around!