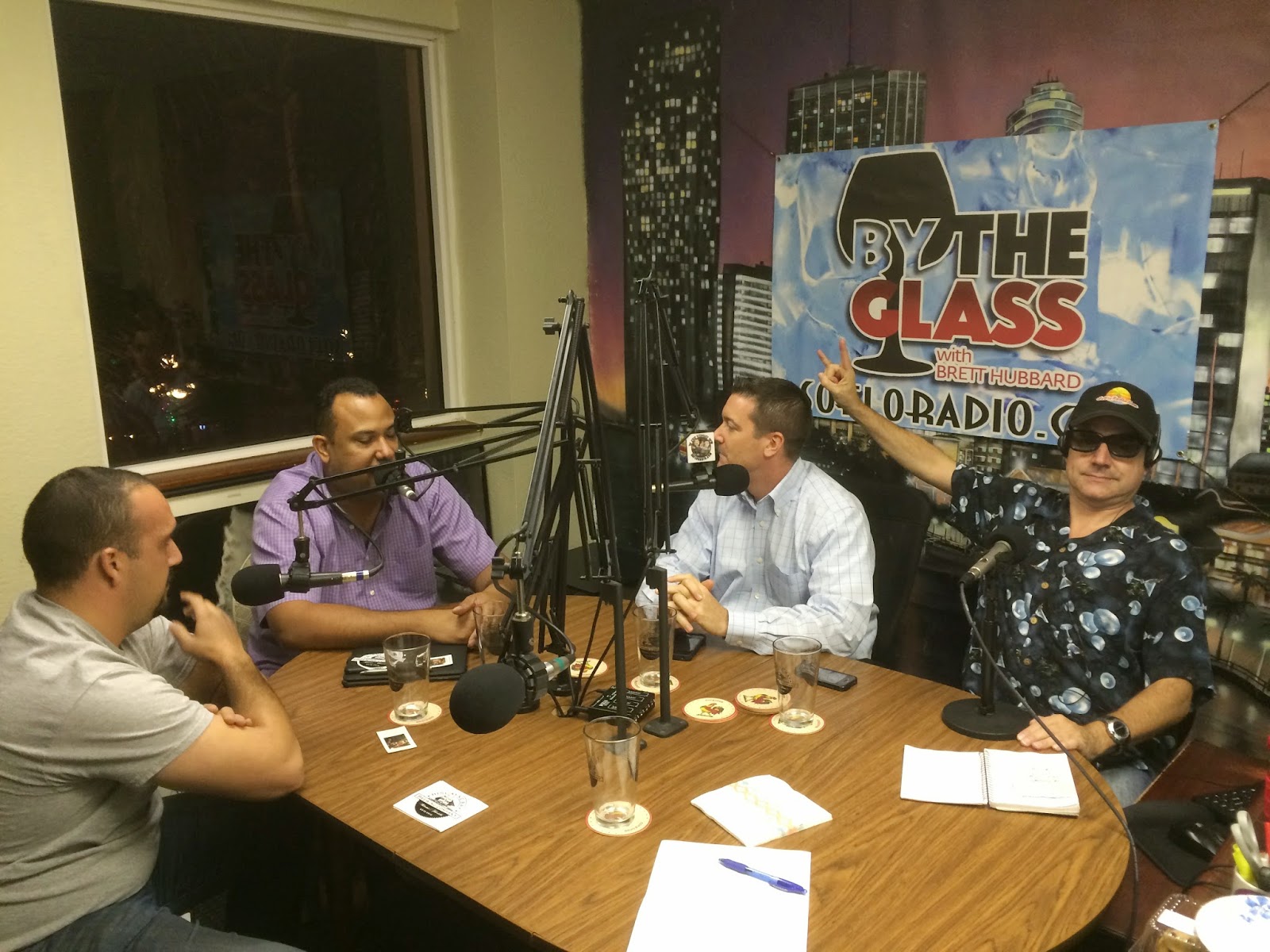 This past Thursday, I stopped by the By The Glass Show to chat with Jose Mallea and Gus Chacon, founders of Biscayne Bay Brewing Company in Doral (Miami), Florida. The brewery is currently brewing around half a dozen beers and is for now sending them out in kegs to the local Miami community. And guess what? They brought five of their beers with them for us to taste!

What do two guys in the Miami Mayor's office that have never brewed beer do? Yep, they follow their dream to open a craft brewery in western Dade County, giving the locals a craft option that has eluded them for a long time. But they were also smart. They "put out a lot of feelers" looking for a professional brewer, and ended up with Aaron Anderson, a professionally educated brewer with experience at Avery, Abita, Breckenridge, and Coors (the technical part of on-the-job training).

So Aaron drives across country, despite having a plane ticket if he wants one. And I think that the team is pretty sure it's because he wanted to bring the prized mermaid that is located in the front of the brewery. She needs a paint job (and a new cap, but that's a different story). I recently had the chance to visit the brewery too, and they have a great location and big space just west of MIA Airport.

The locals that are tired of limited options at TJIFridays and the like keep stopping by the brewery for a beer. But they keep getting turned away since the 3000 sq. ft. tasting room is currently under construction. Fear not--the space should be finished by the end of the year! If you can't wait until Christmas to visit the tasting room, you might find these guys at local tastings or beer dinners (they recently did their first at Anthony's Coal Fired Pizza in South Beach!) I'd follow them on Facebook for that kind of info. 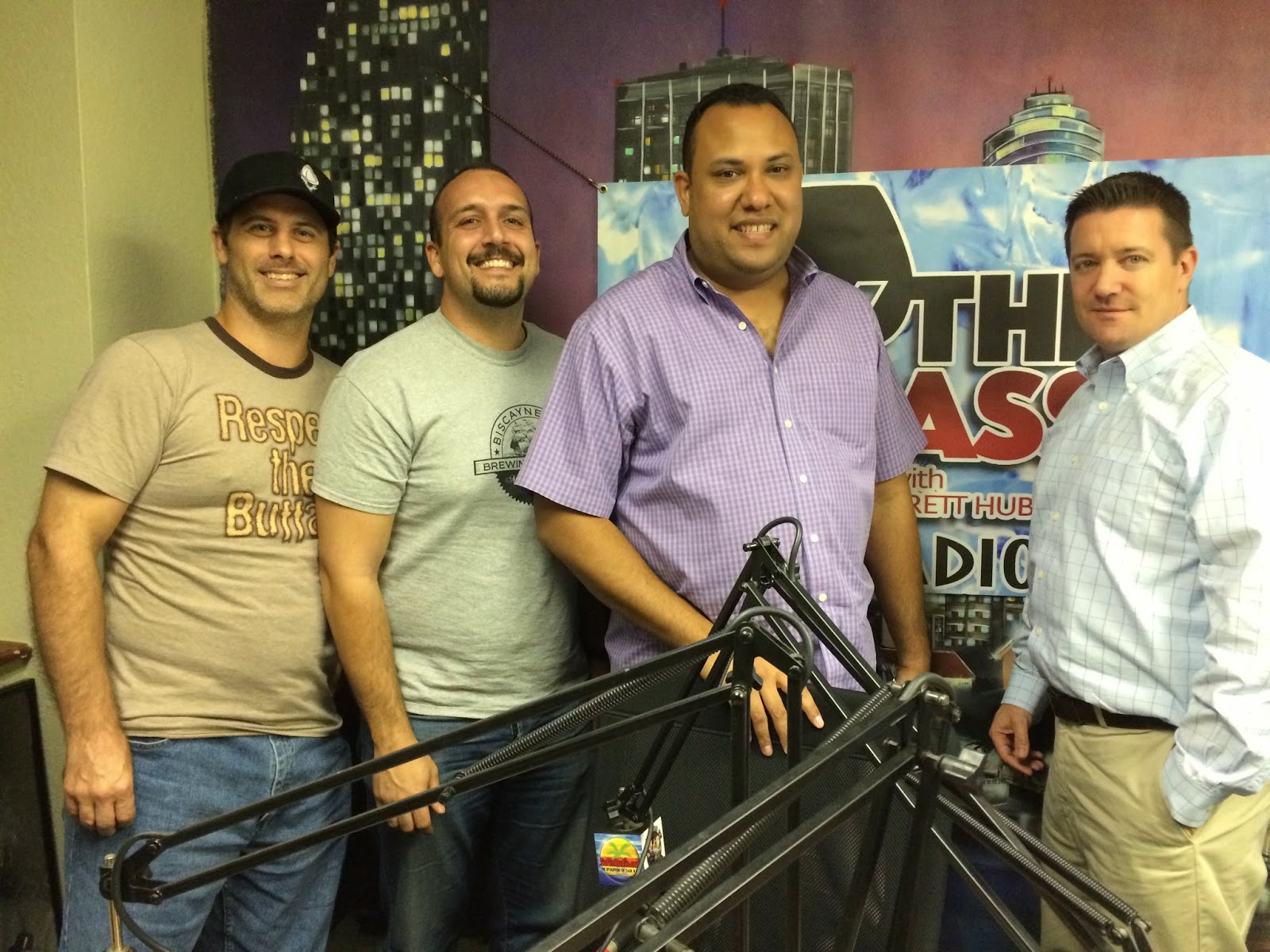 What will they be serving? Well, let me tell you about a few beers we tried. We started with 1513 Golden Ale, a beer named after the year Ponce de Leon discovered Biscayne Bay. And all the brewery's beers are named and created to reflect the attitude and traditions of Miami. 1513 Golden Ale was a dry, rich, lightly spiced ale that had all the crispness of a pilsner. Brett called that! And Jose confirmed that characteristic came due using a hybrid ale/lager yeast!

Miami Pale Ale was next. Smelled like all the awesome aromas of Miami--tropical fruity, mangoes, honey. Fruity, malty flavors, on the sweet end of things but definitely enough pale ale bitterness to balance the beer. That's when Brett started to drop phrases like "residual dextrins."

We then got to try the Biscayne Bay Saison, originally a specialty beer. But as Jose and Gus stated, they are smart enough to listen to the public and positive feedback, and made Saison a regular beer too! Belgian yeast with some spicy cloves comes first, though there is plenty of orange and sweet citrus. And a little alcohol kick! Gus said that this beer is brewed with all French hops!

La Colada Coffee Porter was next. Helluva Aroma! This is a celebration of their Cuban heritage. Gus cold-brewed the coffee and they also added a small amount of lactose to generate some creaminess. Really nice coffee and roasted flavors, bitter enough but NOT astringent at all. Long coffee finish.

We finished the night with Double 9 IPA. If you have no clue what that's referring to, well, it's a dominoes term. Sweet and malty. Maris Otter was the main hop used, though an Australian hop named Ella was used to dry hop the beer, providing a peachy flavor to the beer. This was especially fun since Gus' daughter is named Ella.

Was a fun night. Can't wait to see the new tasting room and new-and-improved mermaid. I'd even paint her myself if I were asked to do so! And if you're in Pembroke Pines, Brass Tap has their beers on tap! I'm personally looking forward to when they start bottling/canning, since I mostly drink alone! Good luck, Biscayne Bay Brewing!

Posted by Beer Drinker Rob at 7:35 AM