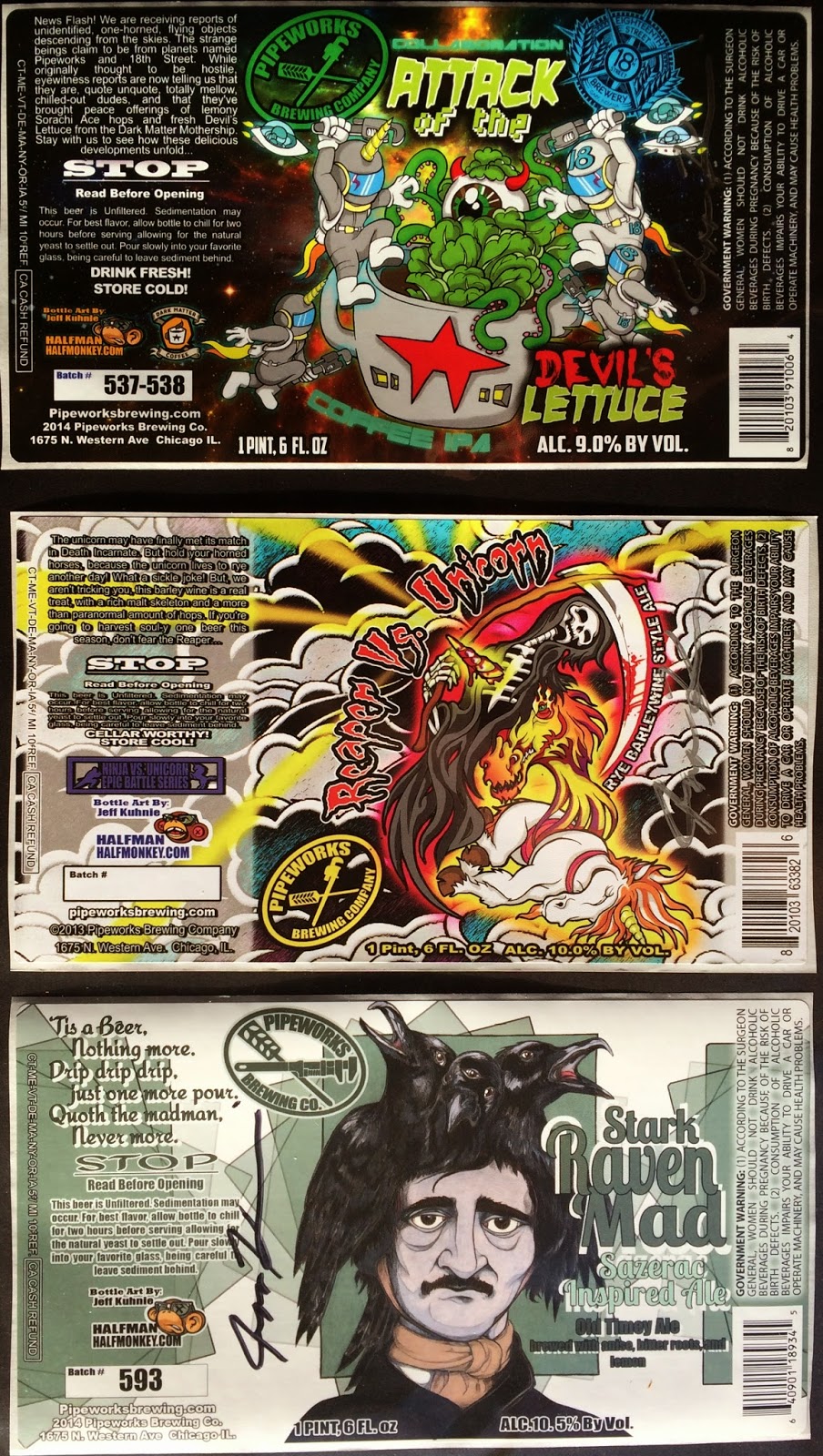 I had a contest a few weeks ago to win original Dogfish Head beer labels signed by artist Jermaine Rogers. To win, entrants needed to answer a few questions. One question basically asked what other beer label art is kicking ass right now. This chick said that Jeff Kuhnie is doing some awesome work for Pipeworks Brewing, so I decided to reach out to Jeff and see if I could get another contest going. Here's an article that shows some of Jeff's label work and gives a little background of his relationship with the brewery.

Now I've never tasted any Pipeworks beers as they are not distributed anywhere near Florida. But if they brew beer like they package their product, then I bet they're pretty awesome. Names like Attack of the Devil's Lettuce Coffee IPA and Reaper Vs. Unicorn Rye Barleywine Style Ale? Along with some crazy stories and of course Jeff's artwork? Excellent! 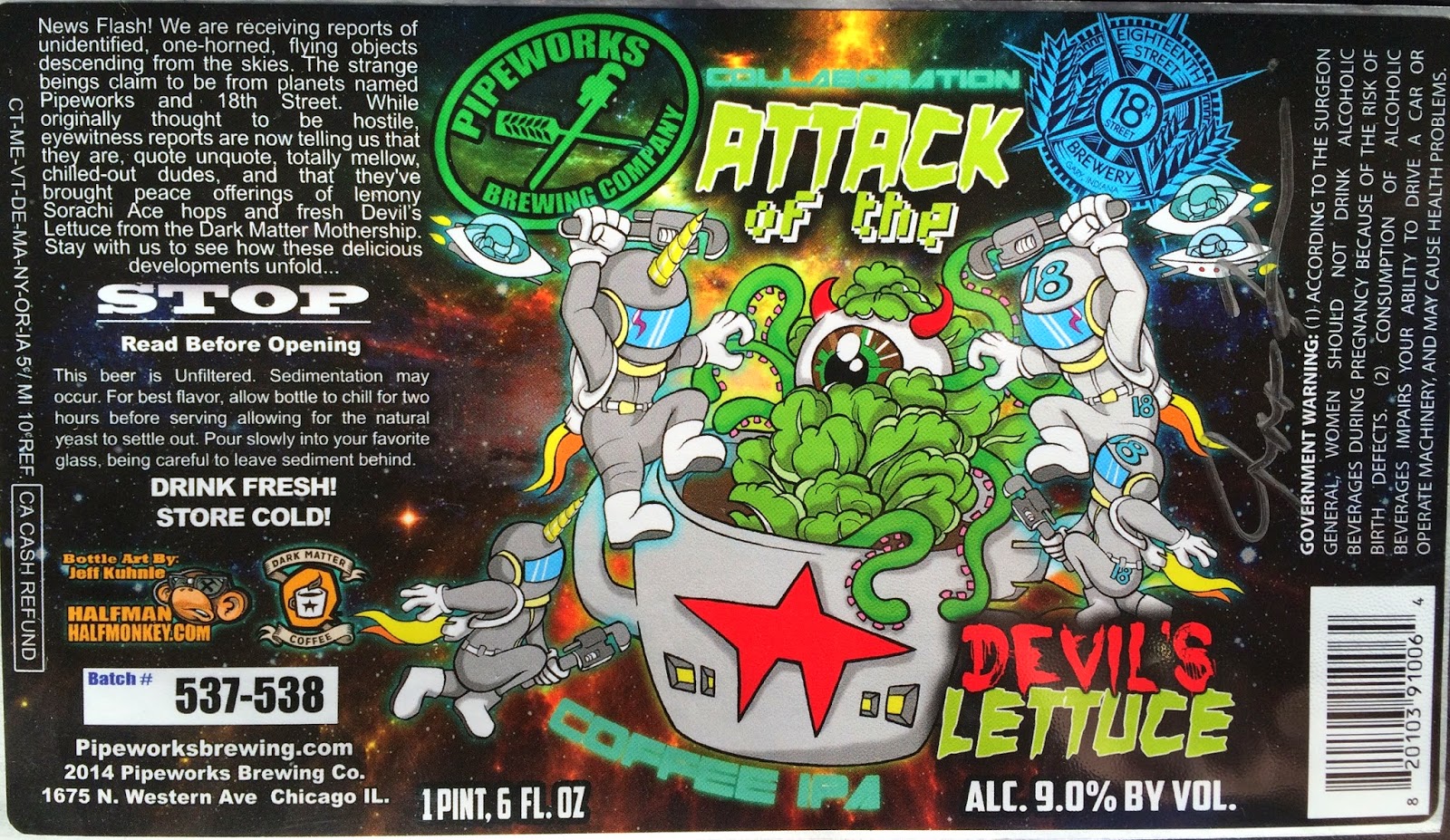 Jeff is one of the nicest guys ever (not that I was surprised). He promptly returned my emails and we had a nice conversation about the project on the phone. I guess he's really good friends with the owners of the brewery and even cut out all of my normal logistical challenges by obtaining, signing and sending them my way--all within a week! And he dropped a few stickers of his work in as well, which you can see all the way at the bottom.

So the contest to win each of the three signed labels... Again, there will be multiple winners, but again I don't know how many exactly. It really depends on how many (good) entries there are. As usual, I'll try to make the rules really simple, but if I need to make new ones as the contest goes for unforeseen reasons, I will do that. No complaining. 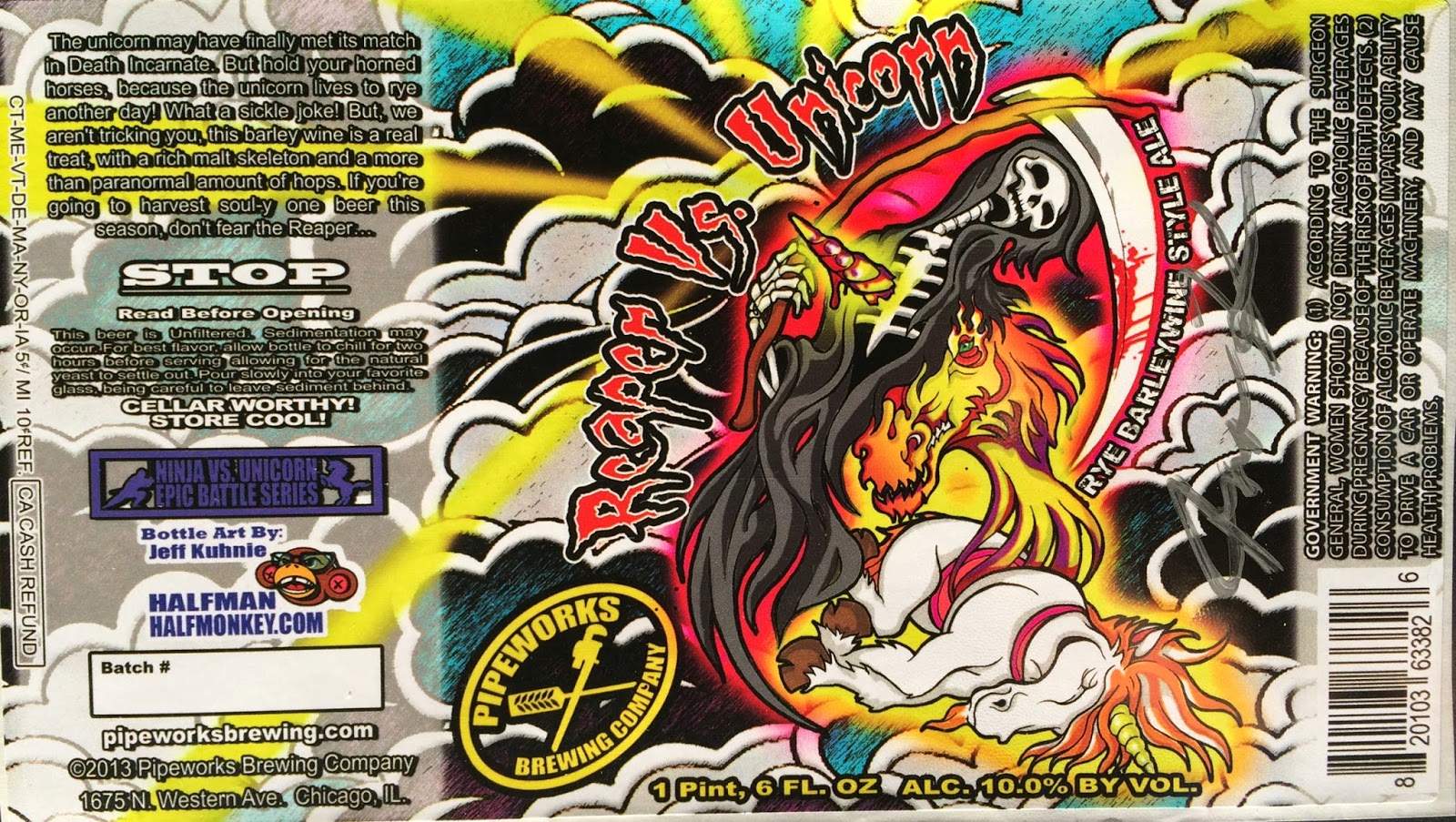 Answer three of the five questions below. I prefer that you leave your answers as a comment, but if you need to email me your answers, so be it. I will publish your email though (not the address), so don't think emailing me makes it private. Don't copy answers from the comments--it will be obvious--these questions all have many answers.

Be creative, thoughtful, original--those are some of the qualities that winning entries will have in them. Contest ends next Friday, January 23, 2015 at midnight. I'll pick the winners over that weekend. Make sure you leave an email or Twitter handle or some way to reach you (or you just became a loser). 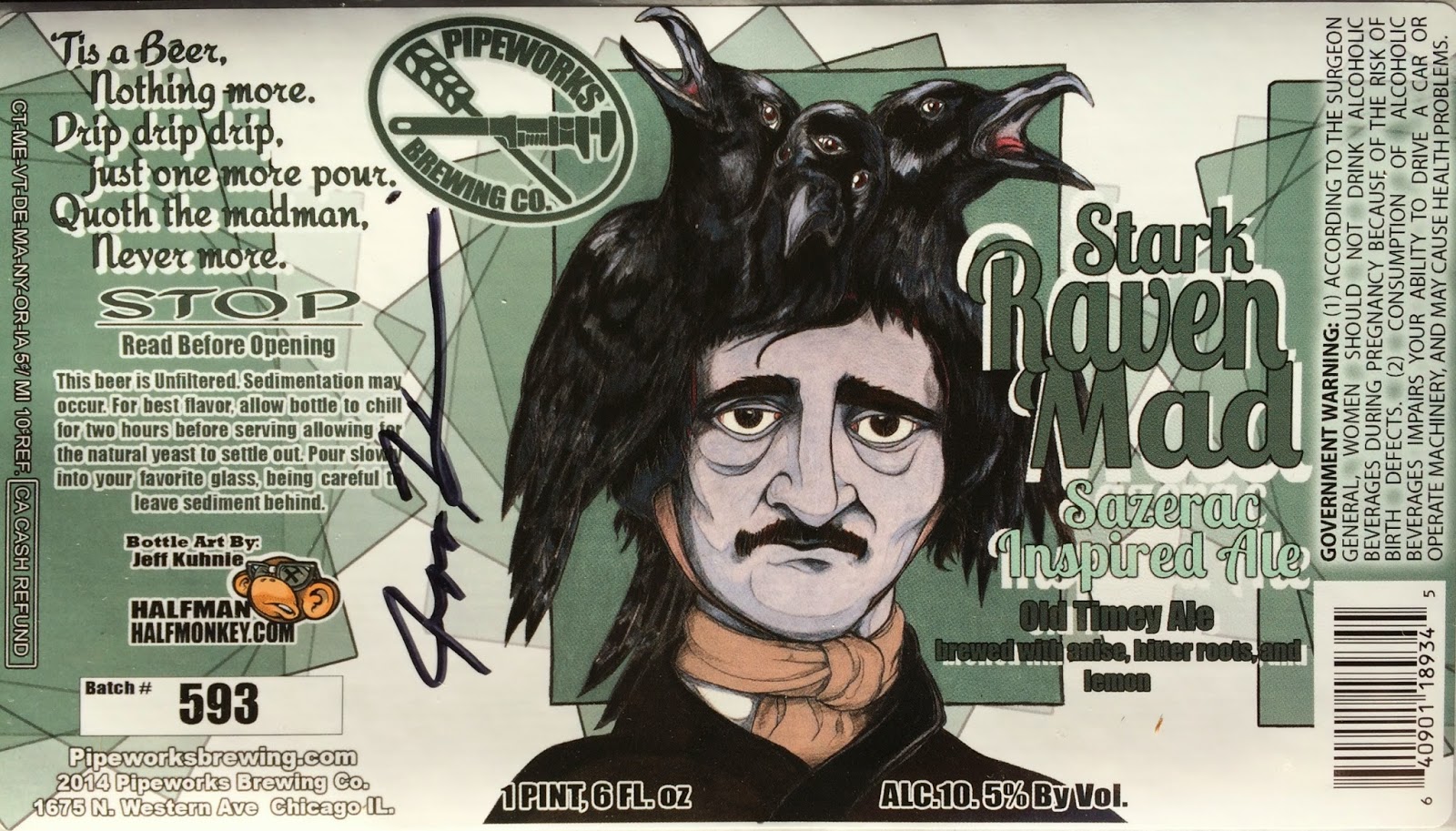 1. Name three other Pipeworks Brewing beers, choosing your favorites based on their names. Bonus: who was the artist for that beer's label?

2. Since I found Jeff because of a this question, I'll ask it again... What other brewery/label artist teams are currently kicking ass (links if you can find)?

3. Buy a Six Pack or Bomber of your favorite beer, which each cost $9.99. Why did you make that choice? Convince me.

4. In a few sentences, what was the best beer festival you ever attended. And why?

5. Provide an original name for a beer you want to brew (or watch someone else brew). What style of beer is it? What makes it special? 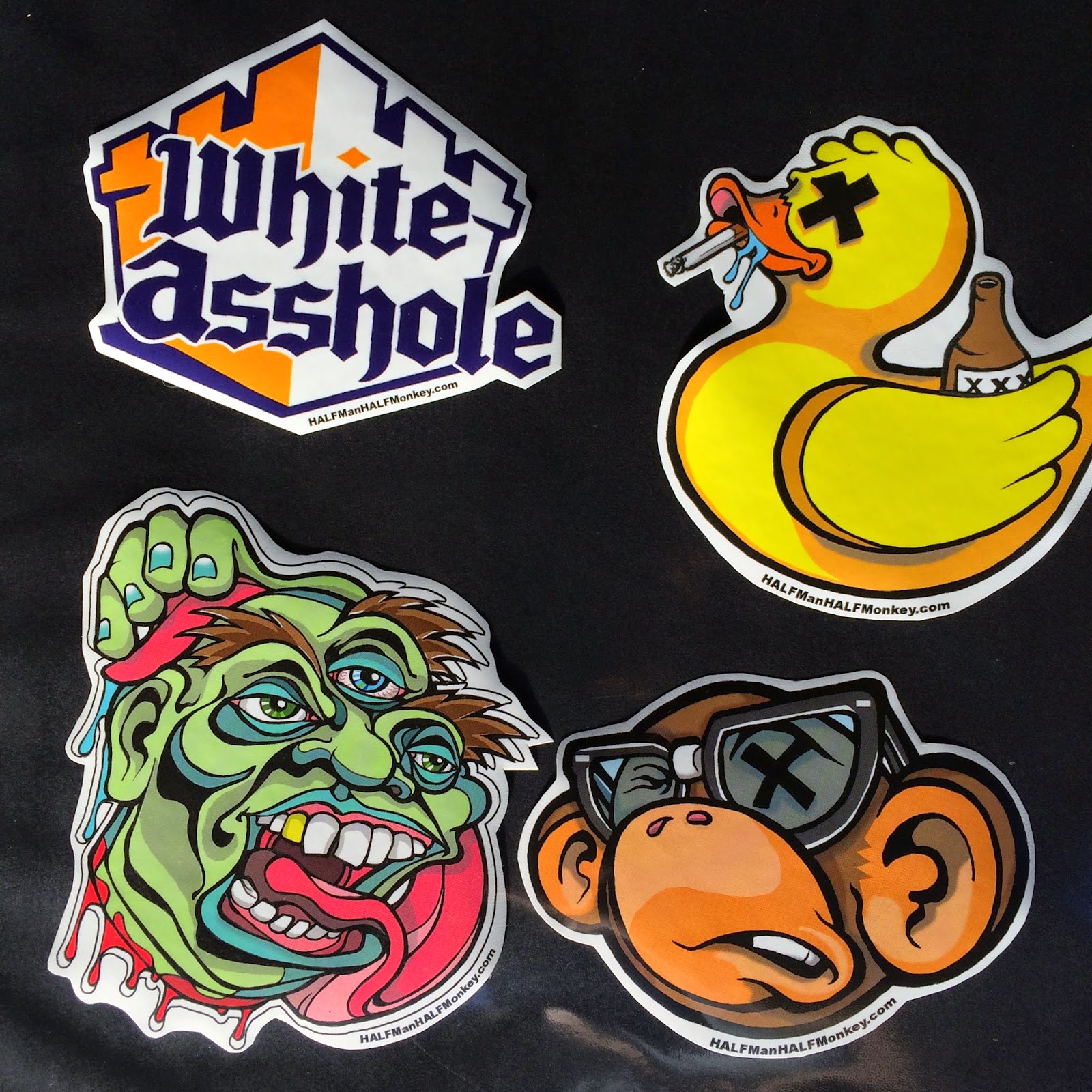 1. What Lurks in the Dark (I don’t know who the awesome artwork came from, unfortunately)
Unicorn’s Revenge (Jason Burke/Ink and Lead Designs)
A Foolish Wit (Jeff Kuhnie)

2. …I would have to give a shout-out to Spiteful Brewing http://spitefulbrewing.com/pages/beer wicked labels.

5. Hop-otage. A Triple IPA. It would be awesomely special because it would be crazy full of hops!

Thanks for the beer label art love! Cheers! –R @stateofther

1. Game of Jones, What Lurks In The Dark, and Closer Encounter. I admit that these were selected because of the label. Lots of Imperial Stouts, mmm. And I like the listing of the malts and hops. My selection would be Game of Jones. I like the cocao nibs and vanilla idea, and at 10% you know it’ll pack a punch.

4. Deland Craft Beer Festival. I may be somewhat partial as it is close to me and organized by friends, but each year this fest gets better. In addition to some of the standard fest breweries, last year 24 Florida local breweries were represented. Each year rare and vintage bottles are featured and poured. The fest sold out with 1000 tickets in 2013, so this is much more than 50 ft of sidewalk with a few booths on either side. Coming Feb 7th, 2015

I’m Darren U, @galileosbane and I approve this message.

2) you cannot go wrong with Ralph Steadman's artwork for Flying Dog. Of course he is pretty well known for his work for Hunter S Thompson.

4) we used to go to the Taming of the Brews. It was a fundraiser for a local theatre group. Started as less than $40 for all you can eat/drink from 20-30 breweries and restaurants.

5) my favorite homebrew name was Amarillo Armadillo. It was a single hop IPA.

Thanks for playing along. There's another really cool contest coming up soon. So check back.