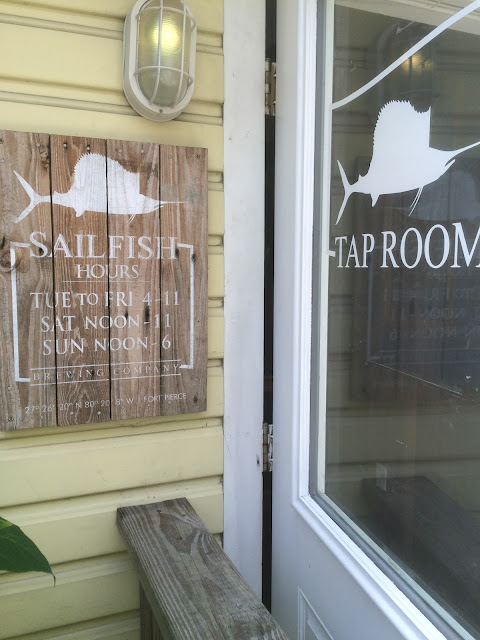 After a quick photo op at Cocoa Beach Brewing, we headed south to start the Sunday portion of #EpicBreweryWeekend! First stop was at Sailfish Brewing Company in downtown Ft. Pierce, FL.  Ed Roberts told me about this brewery last year when my wife and I did a similar brewery-hopping trip back from Disney, but it was too late to add to our already full schedule. So this year it was a MUST STOP!

Before our trip, I reached out to the brewery to see if someone would show me around. Head Brewer and General Manager Al Beltran gave me his number and said no problem. So when we were almost there, I left him a message and crossed my fingers. Take a close look at the pictures, because if you don't know what you're looking for, you may just drive by what look to be old-time homes in the historic part of town. 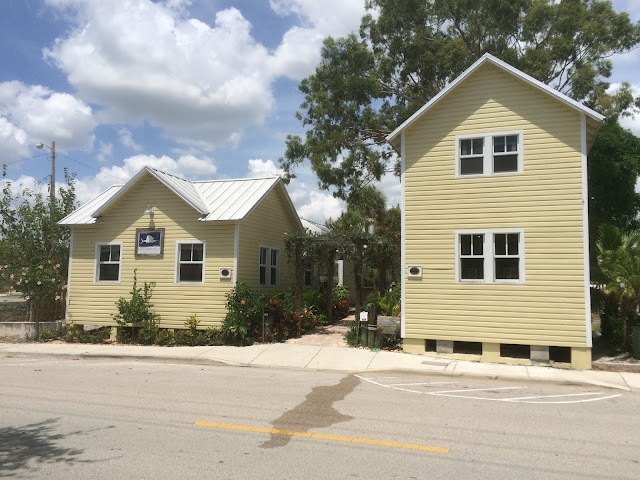 As we approached the set of yellow houses, we saw the Sailfish Brewing sign on the front of one. A friendly guy approached me and asked if I was the guy that exchanged emails with him. Yep, Al personally welcomed us to the brewery. He let us know that they brew the beer in the two story building and drink it in the other where the tap room is located. They also have a huge open court area behind both for parties, music, barbecuing, games, etc.

Al was finishing up some brewing duties, so we sat down at the bar and asked our bartender Caitlin what they had available. She told us that because of a few big parties during the prior few days, they were down to four taps from their normal seven. She explained that they already upgraded from a 1 1/2 barrel system to 3 barrels, but that they are currently looking for the right space to build a 30 barrel production brewery to meet demand.

So we checked out a flight of the four available beers. As we tasted them, we got into a conversation about the local area with the other couple day drinking at noon on a Sunday. It was easy to see that everyone we met in Ft. Pierce was super passionate about everything the city has to offer. The guy we were chatting with turned out to be a City Commissioner, LOL! He told us history of  the area, about some historical spots, events, recreational activities. Heck, we were even talked into visiting the original P.P. Cobb General Store nearby, known for its awesome beer selection. Very nice people and fun conversation.

Our Flight: White Marlin Wit, nice fruity orange, tangy, good spice, light yeast; A Better Tomorrow Wit, brewed with sage, lavender, ginseng and Japanese raisins (supposedly this beer prevents the hangover the next day-Caitlin told us the story, and she's even quoted in this article about it!), for me, it was certainly an interesting lavender-forward beer. Tag & Release Amber, lots of caramel, especially in the long-lasting finish, tasty. Black Sail Black IPA, excellent hoppy and roasted malt complement, if this is your style, you'll love it, very flavorful. 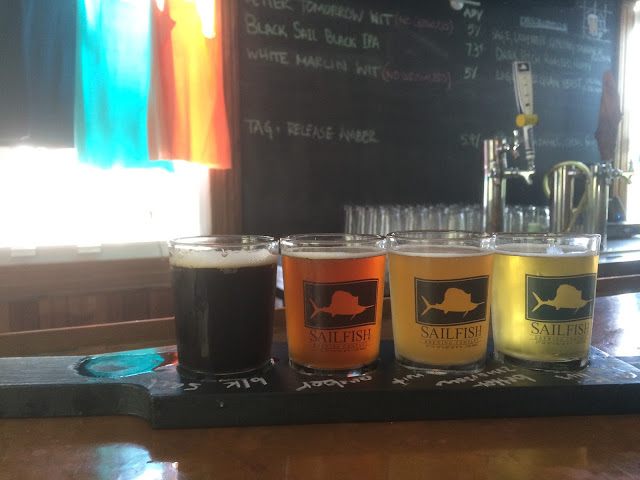 Al returned just as I grabbed a pint of White Marlin Wit. He asked if we'd like a look around the Brew House House? You know what we said. Al also told us that he's beyond capacity just for the tasting room and a few customers they keg for. Three barrels just isn't enough so they plan to find another spot to brew 10 times as much beer. At the same time, they wouldn't be giving up their original space where they are located now.

Al said where he's brewing now would give him even more freedom to experiment with his beers. He told us that he has a strong cooking background, loves spicy peppers, has a good friend that's an organic farmer, that they have mangoes and a eucalyptus tree on site and are growing a citrus orchard out back. I think you can see where this is going! We got a taste of one of those beers that should be done soon. Right now it's called Hoppy Rye Black Saison with Lychees and Star Anise--if you have a better name, Al's entertaining them--something fishing or Ft. Pierce related is preferable. 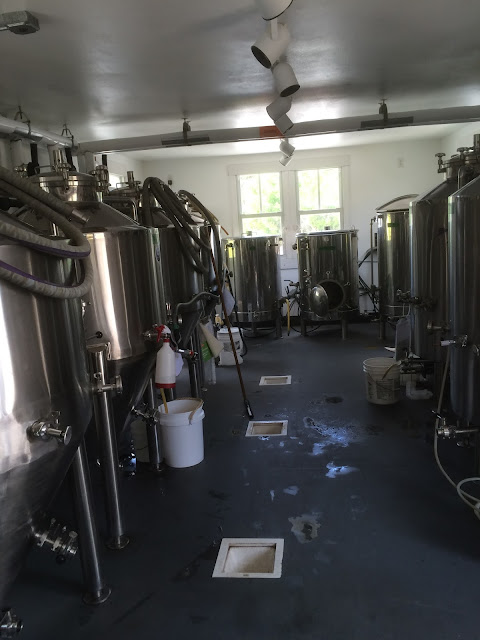 Anyway, Al was talking about some of his past recipes and collaborations he's done with other brewers and restaurants, etc. You could tell he was really passionate about brewing (even on his day off). We got to check out the courtyard behind the brewery. Great space with the fruit trees I mentioned and an enormous Eucalyptus tree as well. Wish I had visited a few days earlier for one of the parties.

So that was it, except I forgot their motto until it was too late. "Everyone has a fish story, what's yours?" Anyway, briefly, about 15 years ago, a friend of mine rented a party boat in Sheepshead Bay for his birthday, maybe 50 or 60 people on board. Of course there was a pool for the biggest fish. Within 5 minutes of dropping my line, I was in a huge fight with a fish, took forever to reel it in. The reason was because I hooked this 20 inch fish in the back and dragged it through the water sideways the whole way. But it was easily the biggest of the entire day. Can you say Winner?

Thanks for a great time, Sailfish Brewing! We'll be back.

Next up... Twisted Trunk Brewing. 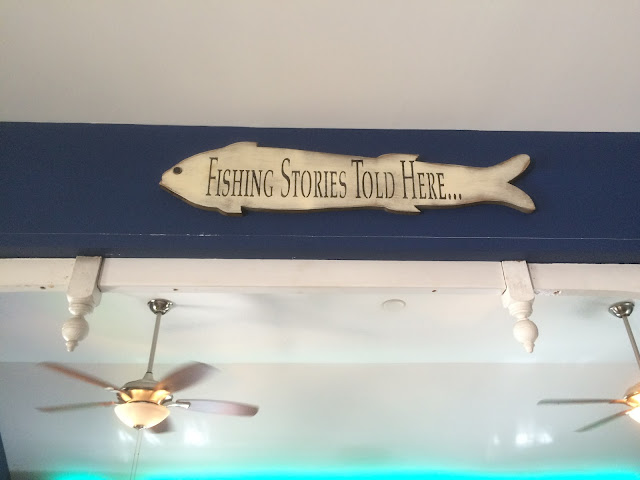 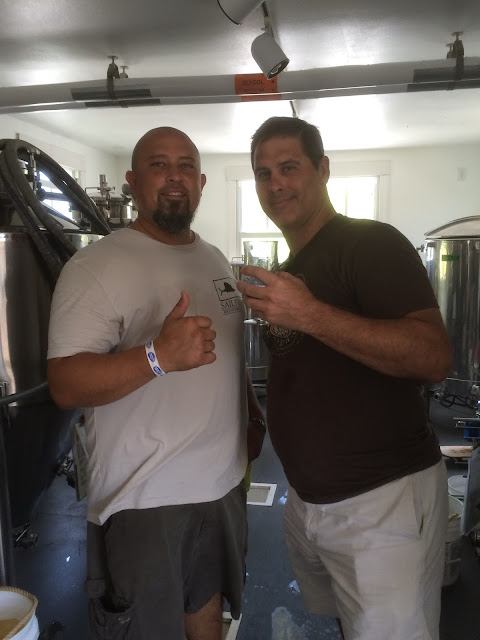 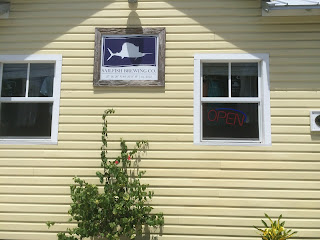 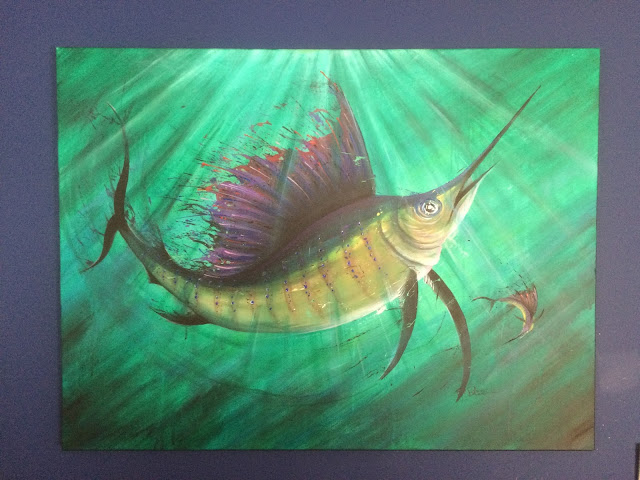 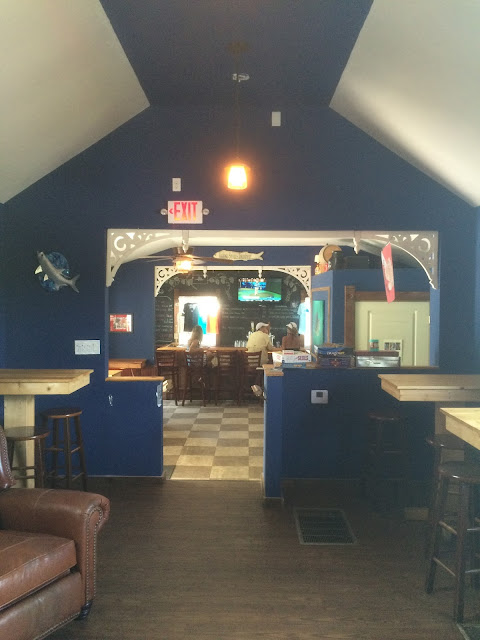 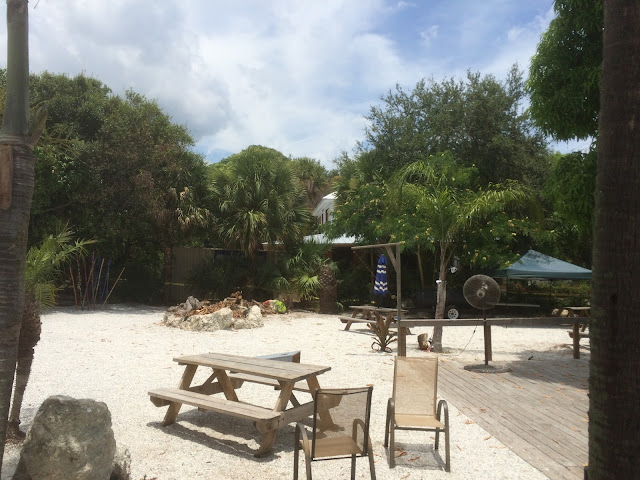 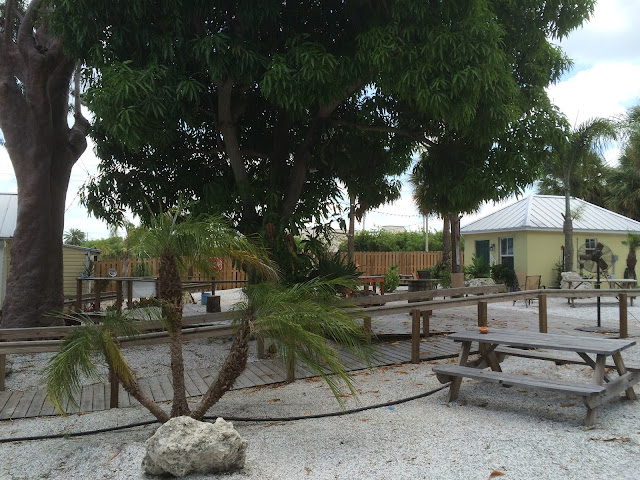