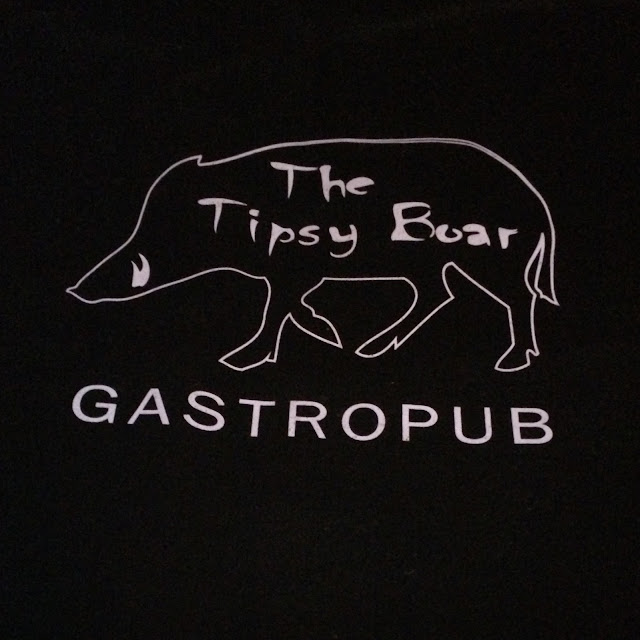 Last Night was a most excellent evening in Hollywood, FL. Local Craft Beer Gastropub The Tipsy Boar arranged a beer dinner featuring their food paired with the beers of San Diego's Green Flash Brewing. And as awesome as that sounds, the dinner was so much more because Green Flash's Director of Beer Education Dave Adams was our host!

You all probably remember another Green Flash beer dinner last year at the Tipsy Boar, right? Well, when something is absolutely fabulous why change? That's what the guys from Stephens Distributing and Green Flash South Florida District Manager Luis Carrizo told me. They said there was not a better place for this dinner and presentation, hands down! 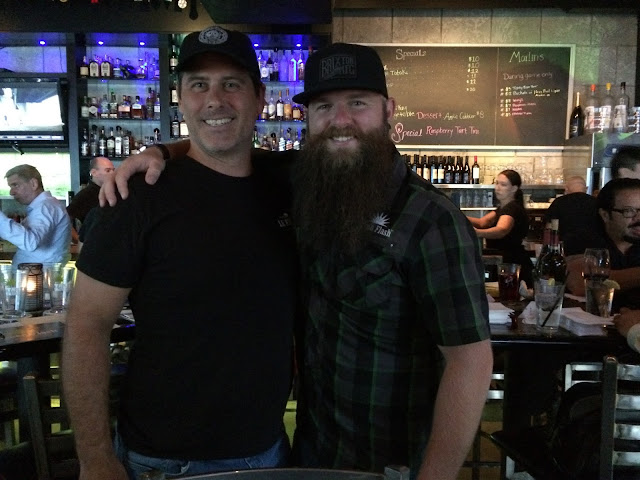 I arrived a little early as always. Since I had done a little research before arriving, picking out the table with Dave's beard sitting across from Luis was pretty easy. I was thinking ZZ Top though one of the other distributor guys joked Duck Dynasty. Anyway, you never forget a cool beard like that!

I sat down, they bought me a few beers, and we had an awesome conversation throughout the entire evening. Dave is one of the most down-to-earth, passionate, funny, intelligent beer guys I've ever met. Full of information and stories, ready to share photos he took of their brewery, etc. I had a lot of fun and I know the other attendees did as well since Dave went table to table numerous times to chat with everyone. Being a craft beer bar, some people that weren't even there for the event came up to say hello to Dave! Rock Star! 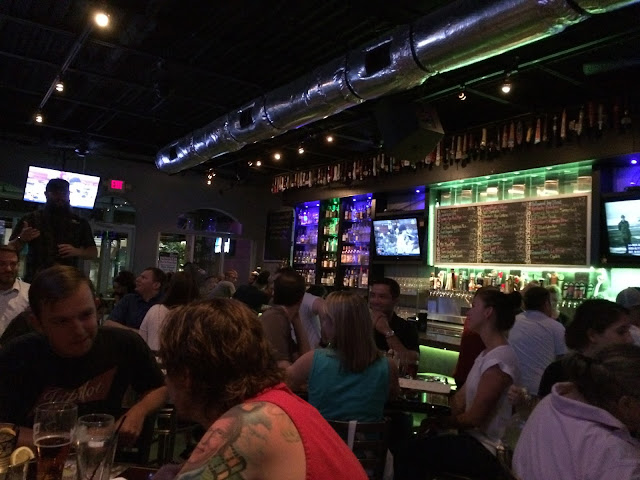 I realized this morning that I didn't bring home my souvenir pint glasses OR a clean menu I could take a picture of. So whatever, I'll just type it as we go here. Because you definitely want to hear about these food and beer pairings. Before each beer pairing course, Dave did a little introduction about the beer and mixed it in with interesting information about the brewery. After the first introduction, he also did a header off the chair he was standing on. A nice tuck and roll save from injury prompted some cheers and other funny comments throughout the night (like "stick the landing" after a later intro.)

Before the dinner even started, I had already had a snifter of Fresco Sauvage as it's what Dave and Luis recommended when I sat down. Apparently, it's the only keg of this Saison ever to come to the state of Florida and normally a San Diego tasting room beer only. Dave brought a few cool beers from Green Flash's newly constructed Cellar 3 Barrel Aging Facility (and this was certainly one of them.)

Dave called Fresco Sauvage his "lawnmower beer." We all should be so lucky! What an awesomely refreshing and flavorful beer. Dry with fruity apple, lots of yeast, some brett, wood, excellent tartness. Dave said that they age this is red wine barrels that no longer even need yeast to be added, that they already have the yeast continuously living in them!

The first course was tasty, great crunch, nice bitter/sweet flavor contrast, though the balsamic glaze and cheese may have overwhelmed the beer a little. Dave explained that while designing these pairings with The Tipsy Boar, his main concern was pairing food and beer intensity. Flavor matching was secondary. I must say each course pairing was expertly done, especially considering it was conceived over the phone thousands of miles apart.

Dave, on a sturdier platform this round, explained that the hops used in this beer were one variety of thousands of experimental hopefuls. Like the Republican primary field, I guess. Anyway, the hops really accentuated the spices in this dish. The Thai sauce provided a great spicy kick, and this paring was my favorite of the night. Awesome food! Awesome beer!

Third Course: I heard someone say, "Bring on the Wild Boar Sausage!" That sausage was served with Sauteed Escarole and Garlic Cloves.. Served with Green Flash Le Freak

First, Le Freak is one of my favorite beers and the first Green Flash beer I ever tried, before it was even distributed to South Florida. A Belgian Double IPA with Trappist yeast combined with a Belgian Trippel? Yum to the yum! Hoppy and piney with lots of fruity orange and banana and yeast and bubblegum. Delicious. The yeasty aspect really played nicely with the escarole bitterness while the hoppy contrast to the rich meat really worked well.

Just when you thought things couldn't be any looser, we started talking about a few other craft breweries and Atlanta's Sweetwater came up. But only because Dave had taken a friend's advice and visited the Clermont Lounge. That's exactly the place that Sweetwater's Freddy Bensch told me we need to go next time in town! Be sure to do you research before taking this advice - this isn't a Yelp Restaurant suggestion!

Palate Wrecker is a hoppy, spicy, very flavorful beer. I'm not sure my palate was wrecked ever, but it certainly worked terrifically against the rich meat and potato in this dish.

I asked Luis some questions along the way as well. Apparently, Dave is the MacGyver of the brewery, involved with management, brewing, beer recipes, retail, cellaring, distribution planning, beer dinners and everything else. Luis also confirmed their new east coast brewery in Virginia Beach is on track to be completed in Q2 2016!

Luis also told me about a Green Flash acquisition that happened fairly recently. While already contract brewing for Alpine Beer Company, Green Flash bought the brewery. From what I understand, the brewery makes kick-ass beers but needed a partner to help make enough beer to distribute. And they found that partner. Luis said several 97+ Beer Advocate rated beers will be here soon, with their signature Pure Hoppiness the first to be bottled for South Florida in November!

We also had a Digestif Green Flash Double Stout which of course was awesome!

That's it. Fun night, entertaining, informative, great people, great beer, delicious food. The service at The Tipsy Boar is magnificent! And I can certainly understand repeating a beer dinner in such an awesome craft beer restaurant despite many other options.

Thanks to Jamie, Luis, Dave, Richard, The Tipsy Boar staff for a wonderful evening. 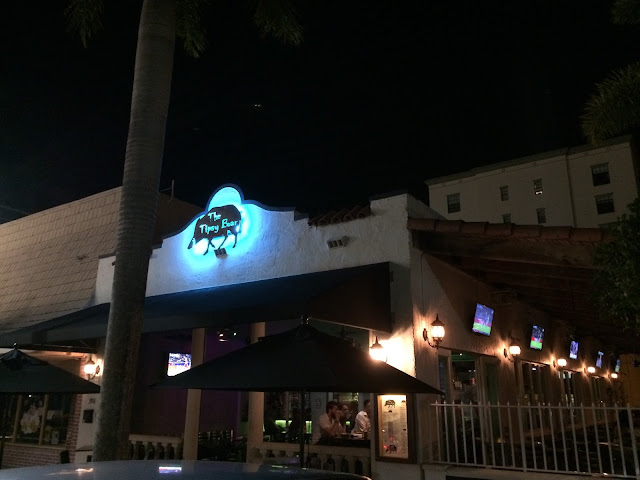 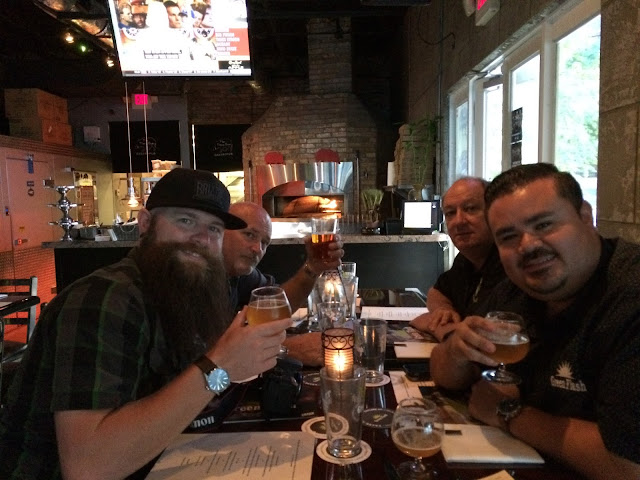 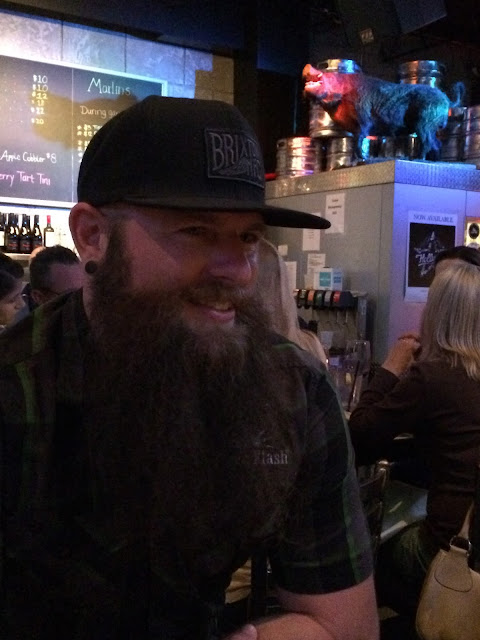