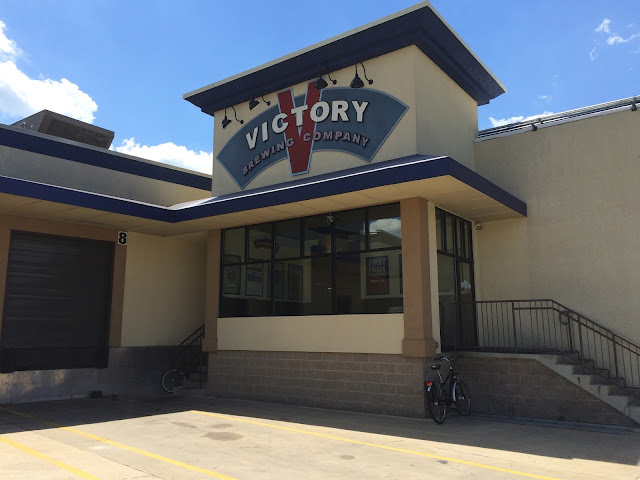 After that awesome stop at Manayunk Brewing, my wife and I headed over to Downingtown and Victory Brewing Company. Stop #7 on #EpicPhillyBreweryTour! I tried to prearrange a greeting with founders Bill and/or Ron but it just didn't happen. Too much going on, too short of time.

Anyway, Victory is one of my favorite breweries so I knew we'd love the experience! We planned on having a pizza there so we ordered one of their large Prosciutto and Mushroom specialty pizzas upon arrival. We then ordered a flight of five beers to check out. 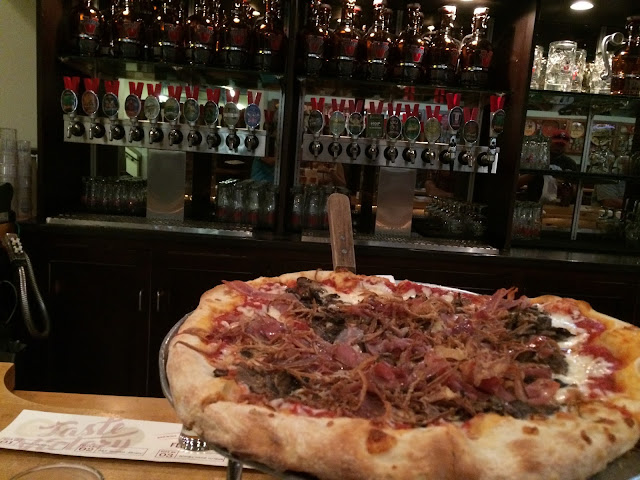 OK. The flight arrived. I took the daily beer-stained, wet-dried-wrinkled tap list paper handout and started writing notes on it, something to remember my 1200-mile visit and a memento/souvenir to take home with me. (BTW, I knew it was printed daily since the opposite side had a single-dated menu on it.) It was a daily informational throwaway, pure and simple.

Jesus H. Christ! The bartender asked me to stop writing on it like I had just graffitied the Mona Lisa, mumbling something about 5000 pieces of paper! So I stopped after writing one word, though I did flash my WTF face. He then reconsidered, saying since I had already written on it, to go ahead and continue. But he made a point of asking my wife NOT to also ruin the one she had. 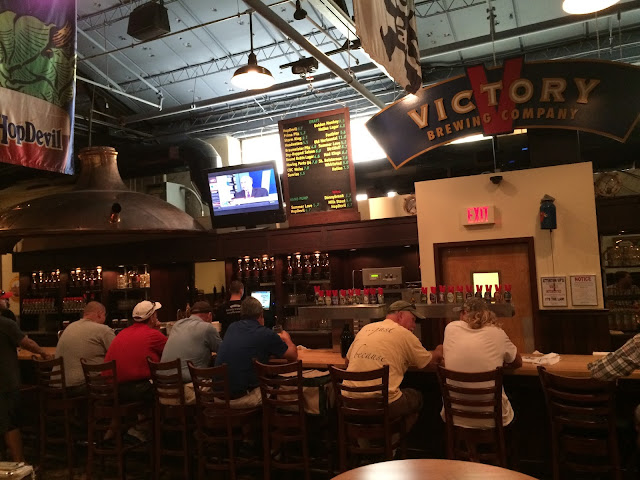 Anyway, if there's some rule that I don't know about, please let me know. We started to drink our beers while the bartender kept a close eye on my wife like she was holding a loose diamond at Tiffany!

Flight One (glad I have my souvenir menu to review): Hop Devil IPA; Dry Hopped Saison; Whirlwind Witbier; Dirt Wolf Double IPA; Golden Monkey Belgian Tripel. I'm pretty sure I've had all of these, but probably not on tap and certainly not as fresh! 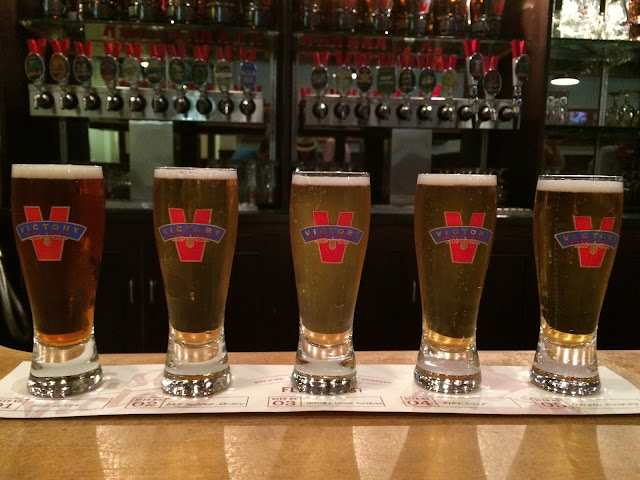 My two favorites were Hop Devil  and Golden Monkey. Hop Devil was full of caramel and a hoppy, spicy bitter kick while Golden Monkey's rich sweet tropical fruity flavor,spicy finish and alcohol streak were spectacular. The pizza was also delicious, full of meat and mushrooms piled high. We finished every slice! 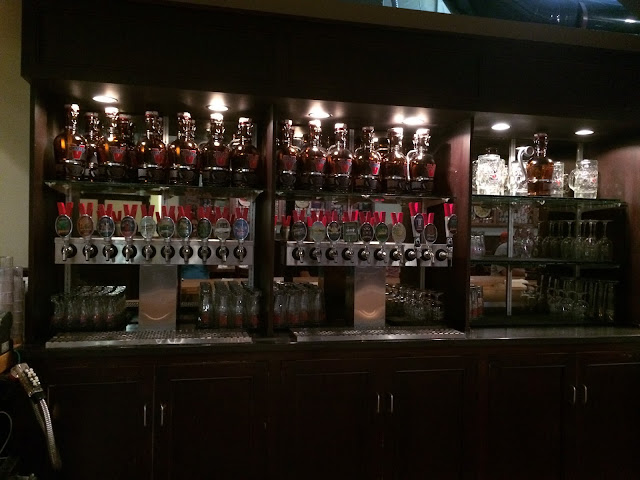 Victory has a great space, lots of room, nice decor and a very fun and lively atmosphere. Oh yeah, and a great tap selection of awesome beers! I had also never been to a brewery where growler fills were constantly happening. Person after person had two or three 64 oz growlers. On the way out, we got a peak into the brewery through a glass window since we were unable to stay for the mid-afternoon tour.

Victory remains one of my favorite breweries and I'm very happy to have visited. The beers are excellent!  Next up... Conshohocken Brewing. 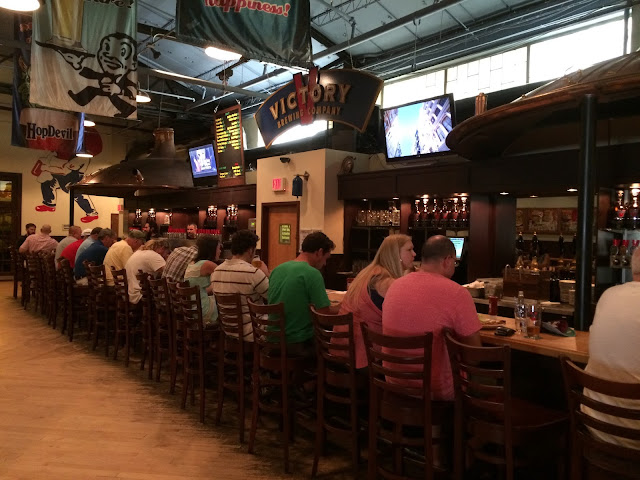 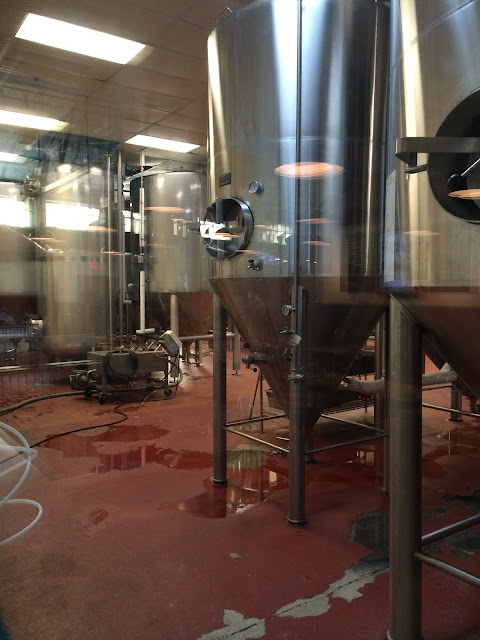 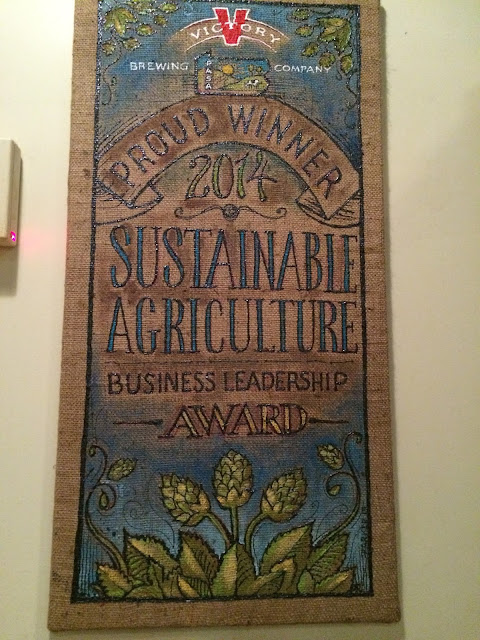