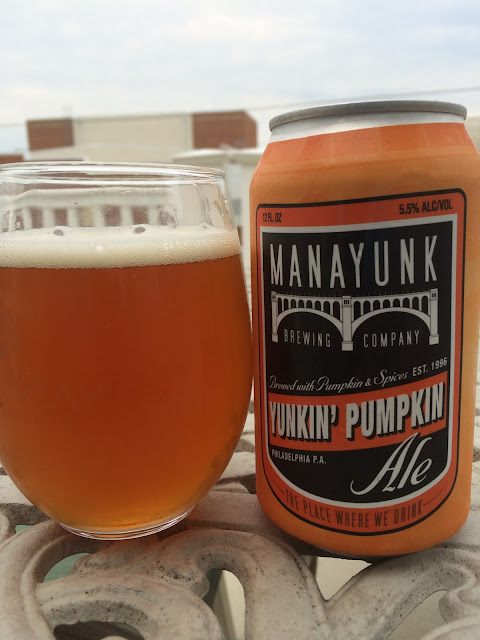 This is the first Manayunk Brewing's Yunkin' Pumpkin beer of this season! For anyone (except maybe the brewers)! There was none fresher than this can! You see, the brewery is starting to can some of its beers. Since it's a relatively new plan, they are renting the services of a mobile canning line. But the afternoon before my visit to the brewery, they canned just a few cases of this beer before they all started leaking. The canning machine went home for repair, and only one 4-pack that sealed properly survived.

On the way out, saying good-bye to Head Brewer Evan Fritz after a tour, conversation and LONG flight of beers, he decided that we could take the survivors as he was scared they too may start leaking soon. We drank them on the beach over the next few days.

I'll probably find my original tasting notes from last week written on some itinerary or back of a receipt, but I can't find it as I write this. But I'm pretty smart and can for sure remember tasting the beer. After all, I went to Cornell... ever heard of it? 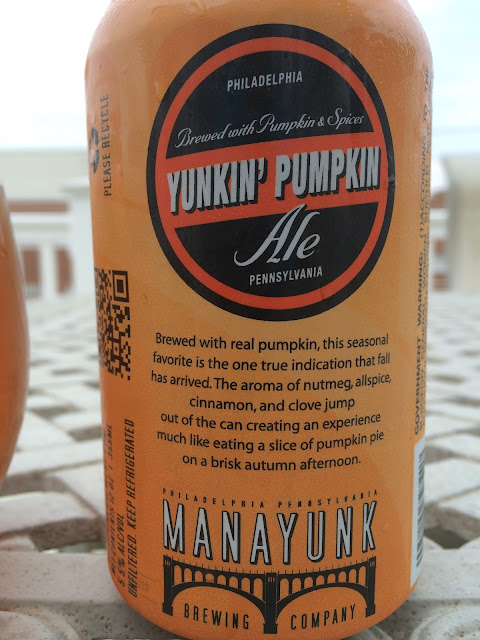 Seriously though, pumpkin beers are one of my LEAST favorite styles, and I normally mock the breweries that put out a pumpkin beer in July. But you need to remember that Manayunk is just starting to can so they need extra time for distribution (and problems that may arise, duh). AND more importantly, they are basically in the backyard of Easton's Weyerbacher Brewing, the brewery that defies the term "Fall Seasonal" more and more every year. Gotta get it on the shelves in SE Pennsylvania!

Yunkin' Pumpkin was great! Spicy with cinnamon and nutmeg, malty with sweet pumpkin flavor. The spiciness was not overdone which is what happens with at least 75% of pumpkin beers. And this was not a sweet beer, another problem many breweries have with this style. I would definitely put it in the same category at Dogfish Head's Punkin Ale, one of the best made beers in the style!

The End! Check it out!