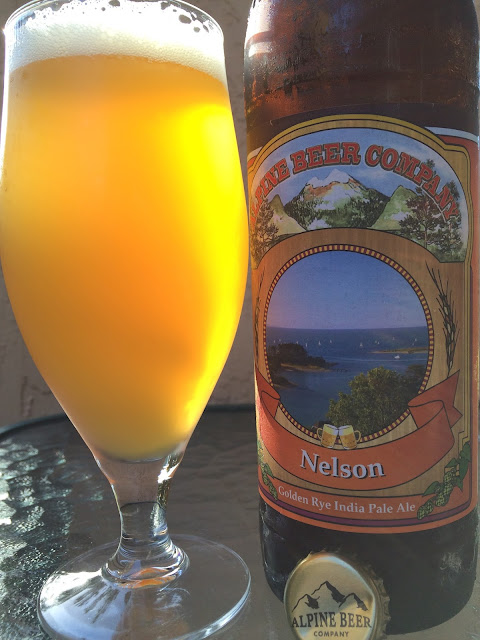 I recently tried Alpine Beer's Hoppy Birthday and after thoroughly enjoying that, grabbed a bottle of their Nelson. Nelson is Hoppy Birthday's less creatively named brother, named after the New Zealand Nelson Sauvin hop used while brewing it. The label shows a rocky ocean and coastal scene which I'm guessing is New Zealand. This is a Golden Rye IPA, so in addition to the cool hops, Alpine added in some rye to give the beer that "something special." 7% alcohol. Best By 12 MAR 16.

Beautiful fruity aroma, full of both tropical and grapefruit. Tropical fruity mango and pineapple flavors come first, but a hella spicy peppery, piney answer comes quickly. Lots of grapefruit and citrus, great bitterness. At first I would say this beer is a bitter monster, not balanced in the best of ways. I mean, who doesn't want their IPAs to be dripping in dank hoppy bitterness?

But honestly, after letting Nelson hang around on the counter for a while, that bitterness mellowed and the beer glowed with many more fruity nuances in the most awesome way. A nice lingering fruity sweet flavor started hanging around after every sip. So... hop lovers... drink a little right out of the fridge to get your hop bitter fix, but let the rest of the bottle sit on the counter for 15 minutes before finishing some spectacular flavors! 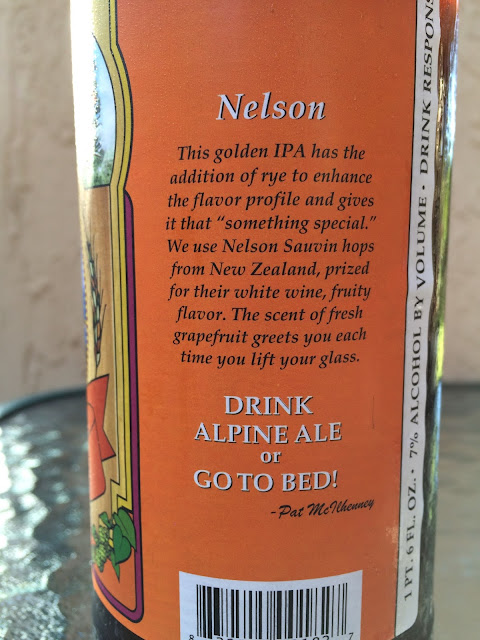 Posted by Beer Drinker Rob at 7:31 AM