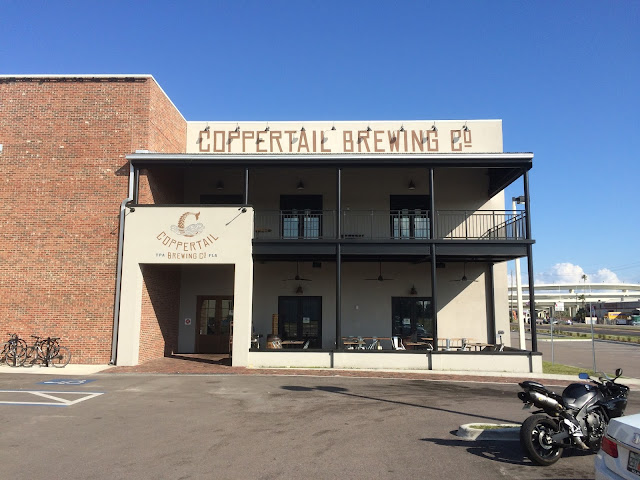 After a short trip from Tampa Bay Brewing Company, my wife and I arrived at Coppertail Brewing. Damn straight! Gotta keep #EpicTampaBreweryTour moving, and Coppertail was Stop #3! Over on the other side of South Florida, we've recently been exposed to the core lineup of Coppertail. The beers and the label art are all fantastic: Unholy, Free Dive, Wheat Stroke, Night Swim! Yeah!

What a great space! The tasting room is gorgeous with terrific artwork placed throughout and an open ceiling revealing lots of duct work. You also have several views into the brewing area through glass windows behind the bar. The area was very spacious and comfortable with couches and tables throughout. Fun Portuguese and Spanish music gave a really nice ambiance as well. 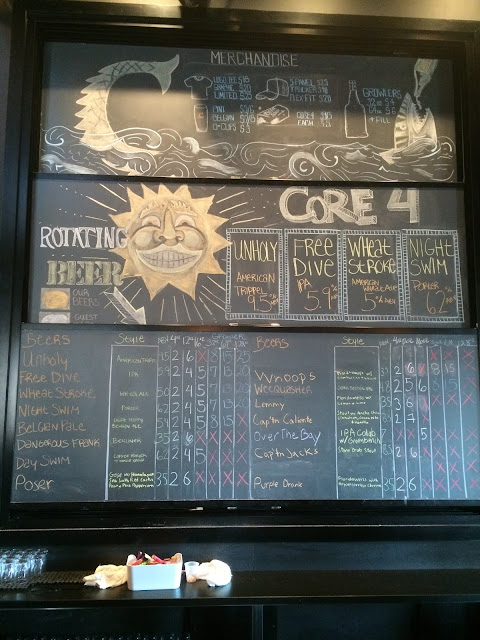 Brewery tours were not available the day we planned to visit, so I reached out to the brewery to see if anyone would be around and willing to show us the brewery anyway. Owner Kent Bailey replied and said it shouldn't be a problem. When we arrived, the person I was to ask for was away, but Sam the Bartender (like Cheers, just occurred to me now) sent a few texts and made a call and Logistics Manager Dave Iwansky appeared, more than willing to give us a quick tour.

I grabbed my mini glass of Unholy Tripel and off we went. Dave first led us toward the front of the building, away from where the obvious brewing was being done. He wanted to show us some of the history of the brewery. Our first stop was the original tasting room, right off the main street. All of the original art was still decorating the walls. There were still kegs lined up and t-shirts in frames displaying retail merchandise. It appeared that the day the current tasting room opened, this spot just got abandoned. Was a fun "memory lane!"

Dave showed us some of their barrels where they were aging beers with wild yeast strains. Those were kept in a different warehouse area for now. That part of the building was over 100 years old and a former Hellmann's Mayonnaise and olive packing plants. Unfortunately it will need to be torn down as it is reaching the end of its life. But I'm sure the new building will be awesome!

The actual brewing area was huge with room for more tanks when necessary. They also had their bottling line in a corner close to the tasting room so guests could see it in action on days they were bottling. Pretty cool. Anyway, it was very nice of Coppertail and Dave to give us the impromptu tour. Kent actually stopped by later to say hello when we were comfortably drinking back in the tasting room! Awesome! 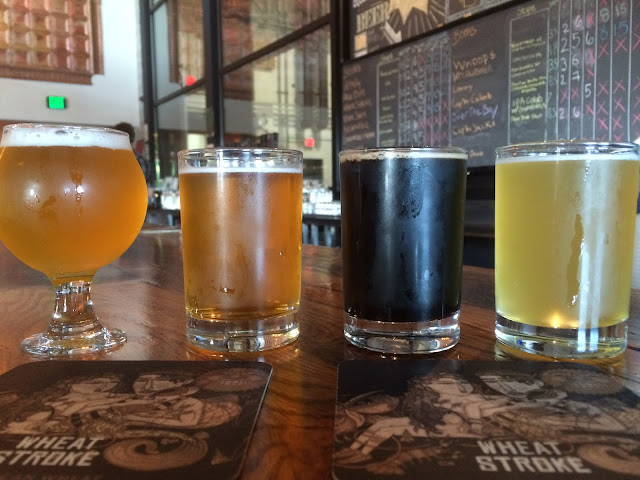 Unholy is one of the core brands and I had tasted it before locally from a bottle. Yep, didn't disappoint--sweet and spicy, fruity, rich flavor. Belgian Pale was terrific--yeasty, hoppy, refreshing, flavorful; My wife loved Day Swim, their porter brewed with coffee. The coffee was really strong and added a nice flavor without masking the base beer; Lemmy is one of the treatments Coppertail brews using their Dangerous Frank Berliner as a base beer. Nicely tart, not puckering, with great lemon and lime flavor, super refreshing. 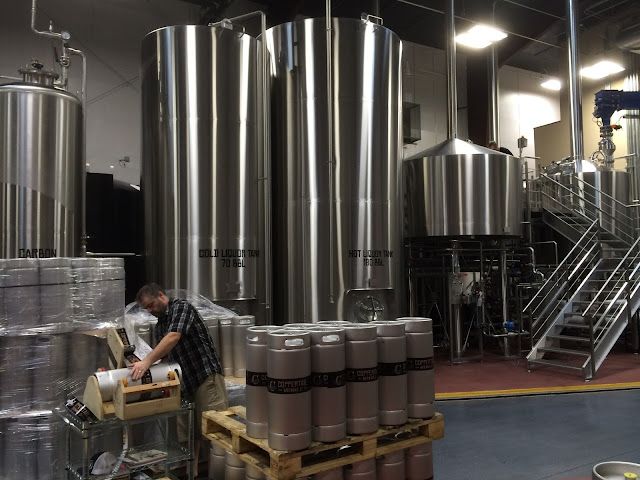 I asked about their Over the Bay IPA. Sam told me it was a collaboration beer they did with Green Bench Brewing (over the bay) which was just tapped that day. He said that it's similar to their Free Dive but is brewed with a slightly different hop bill to make it a little more bitter: Azacca, Peko and Citra. I had a pint next to a small sample reminder of Free Dive for comparison. Over the Bay was terrific!

My wife decided that the Night Swim t-shirt was a perfect way to remember the trip. She even wore it the next day during the conclusion of our brewery tour!

Thanks to Kent, Sam, Dave and Coppertail Brewing for the hospitality. Next stop... Dunedin Brewery. 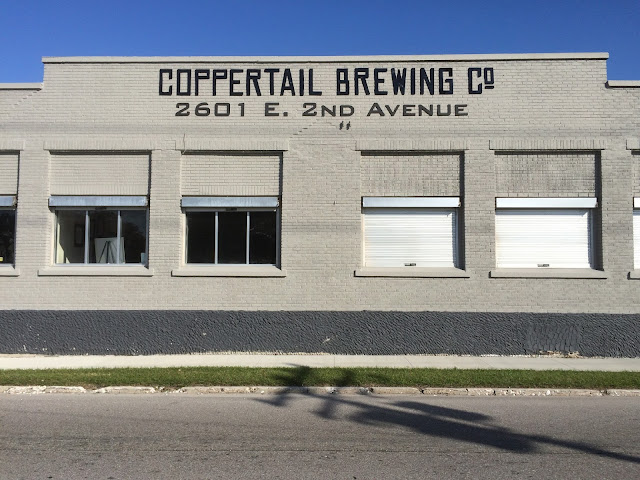 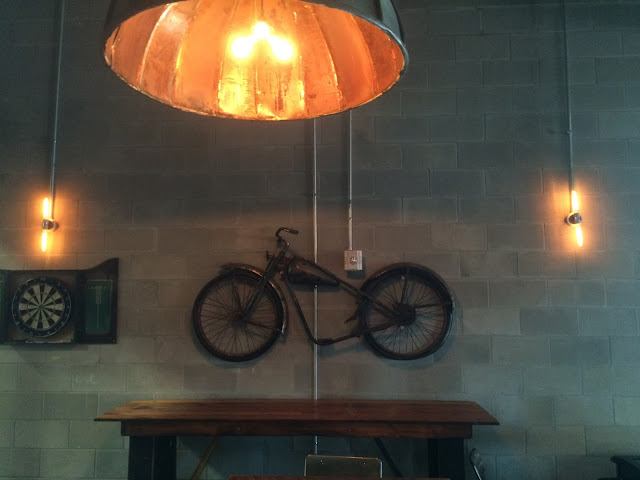 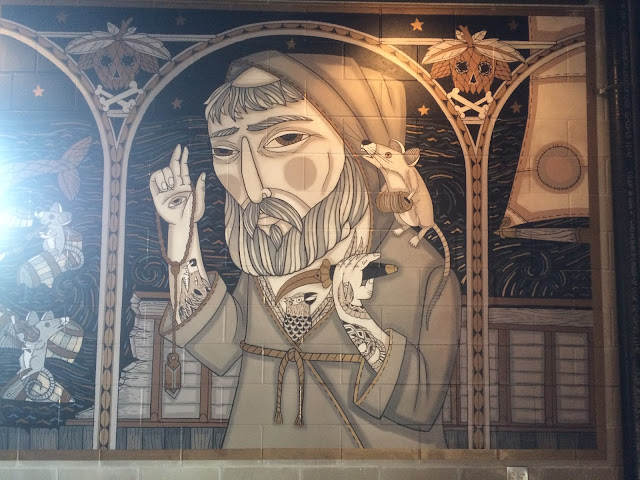 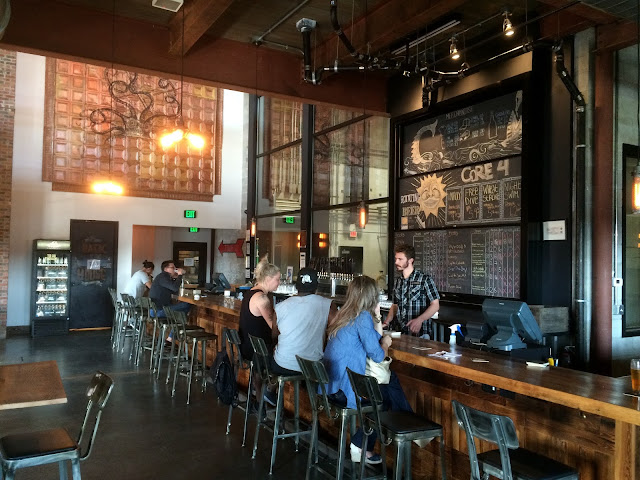 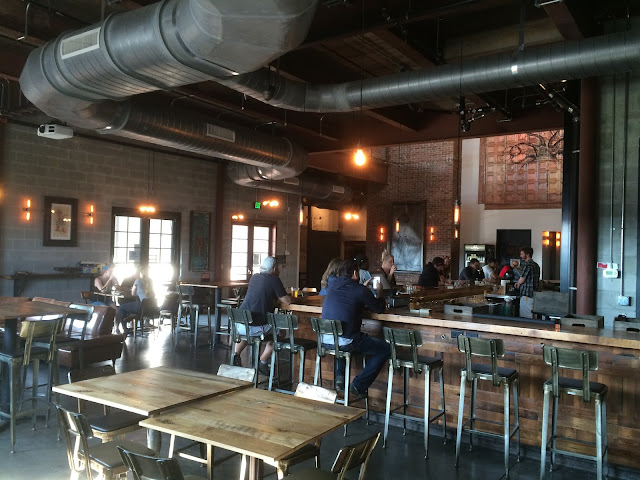 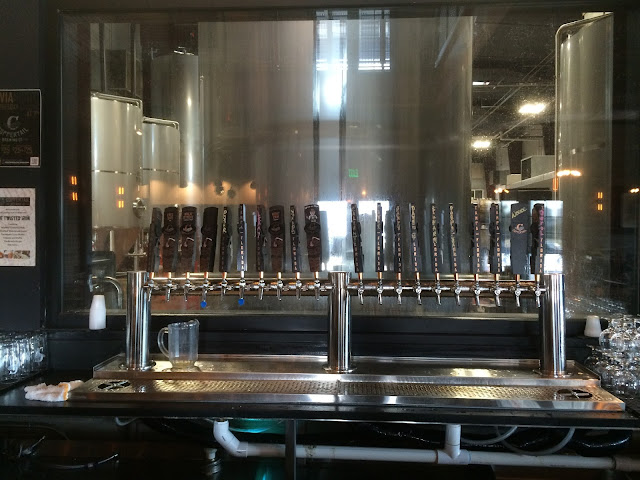 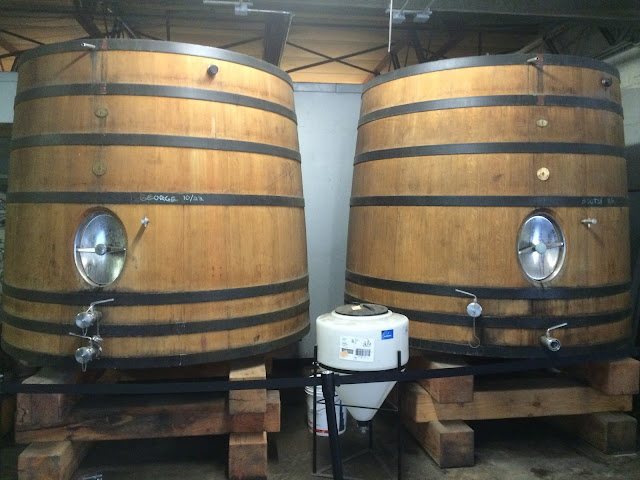 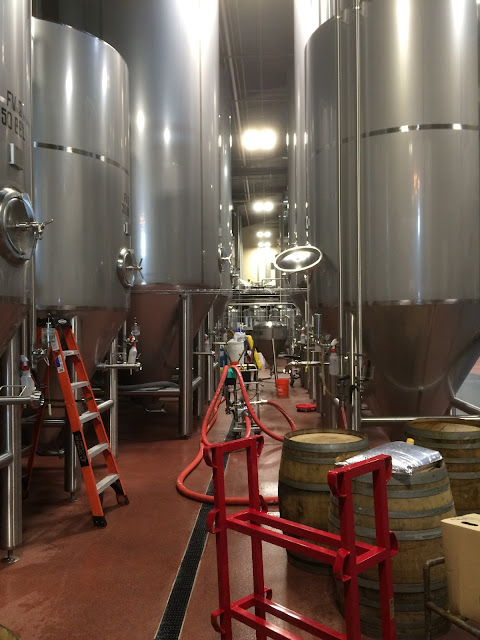 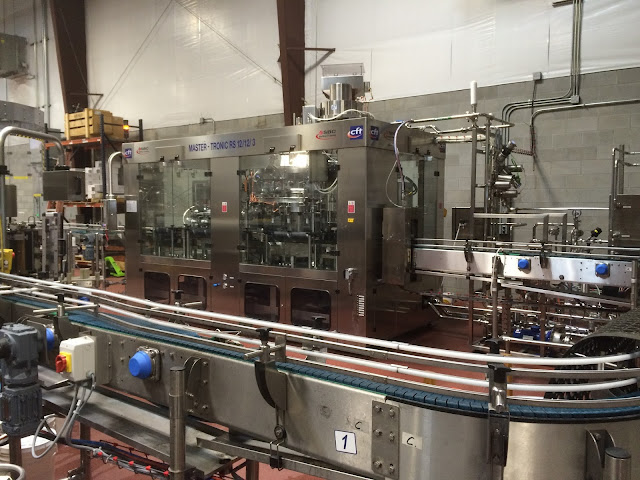