Everyone knows that Russo's Coal Fired Italian Kitchen in Pembroke Pines makes kick-ass pizzas and strombolis. I was there with my family eating both on Easter Sunday not that long ago. But I bet you didn't know that Chef Jason Arroyo has also created spectacular specialty menus in conjunction with Russo's new monthly beer dinner series, now with six editions under their belt.

Last night I had the opportunity to taste a fabulous dinner featuring the beers of Brooklyn Brewery. Brewmaster Garrett Oliver was not available. However, Phil from Distributor Gold Coast and Brooklyn Brand Ambassador Jorge were the perfect beer complements to Chef Jason's food introductions. And I guarantee that you'll be surprised with all the innovative non-traditional Italian dishes we were served!

In addition to last night, I also attended the Anchor Brewing dinner (where Brewmaster Scott Ungermann actually did show; take note Garrett) and the 21st Amendment Brewery dinner.  Check those out for more awesome beer and food pictures, also prepping you for what to expect when you sign up for the next one!

The next monthly beer dinner is actually already scheduled for 7/25/16 and I will definitely edit in the brewery name once it's confirmed, but considering the success these events have enjoyed, I'd suggest giving Karla a call to reserve your spot ASAP 954-431-1131.

Now, here's a recap from last night with some sub-par pictures of exquisite food. When you go to a Russo's beer dinner, you can also expect some giveaways, bonus beers, and fantastic service. The beers are mostly served on draft and refills come as needed, the best way to handle a dinner like this as every person is different.


We started with Korean Fried Octopus paired with Sorachi Ace! Dude! Yeah! It was amazing! Follow that with oven-roasted bone marrow schmeared on some awesome toast? OMG!

Adobo Braised Chicken and Braised Oxtail Rottollo were next. While every single dish was spectacular (seriously, home runs), my favorites were the Octopus and the dessert... Chocolate Torte with bruleed hazelnut meringue and malted ice cream. Spectacular, and paired with Brooklyn's Monster Ale, also a mega-treat! 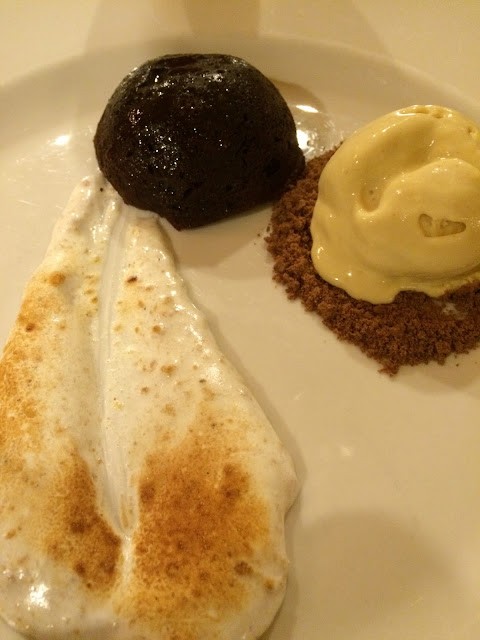 Along the way, Gold Coast treated the diners to a few bonus beers. Honestly, I could have kept drinking that Framboisie all night long. And yeah, Black Ops (Russian Imperial Stout) does exist. We got to try a few bottles in our own take home snifters that had been aged for several years!

Again, this is a must-try series of beer dinners. Russo's is located conveniently on Pines Blvd. with I-75. Call Karla and you will hear all about the next dinner! See you there