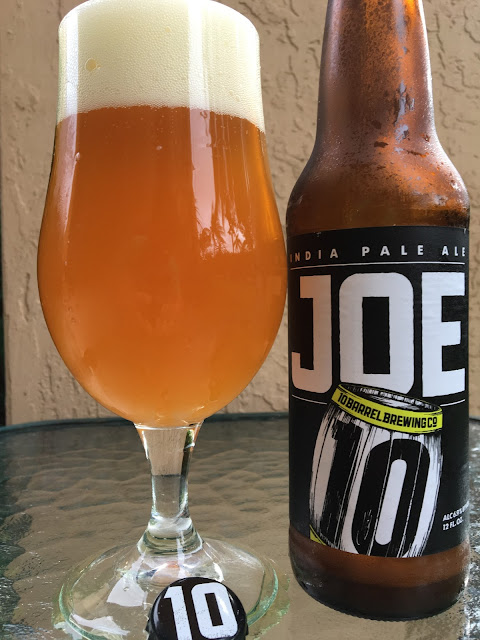 Joe IPA is so close to Joe PA that I took a double-take. BTW, fuck you if you were rooting for that complete take-down of Paterno and Penn State a few years back! 10 Barrel should have stuck with the original name SAM and risked the trademark fight!

So back to this Bend, Oregon beer brewed by 10 Barrel Brewing. I tried it at Grovetoberfest, though I don't remember much about that early afternoon shot. I didn't even realize this brewery had beers in Miami, so grabbed a bottle a few days ago. Uh Oh. Bottled 18APR16, over 6 months old, I'm an idiot for not checking that. 6.9% alcohol.

Big head. Fruity, citrusy aroma, some nice sweet orange with a little warmth. Tangerine and grapefruit citrus flavors in the beginning; then astringent, dry, with some sourness. NOT IN LOVE at all. Again, with some warmth, a little of that astringent, off flavor disappears, but still there are so many awesome IPA's, I'll move on. And yeah, it wasn't fresh, so that's an issue with the liquor store, distributor, and brewery. If you want to brew in Bend and ship to Miami...