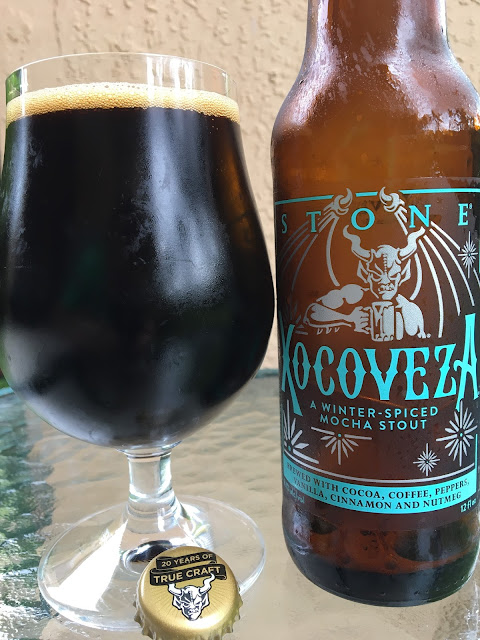 Stone Xocoveza was originally brewed as the winner of their annual homebrew competition in 2014. Apparently, Stone got tired of hearing social media calls for a re-brew, and now making this beer is "a yearly tradition too special to skip."

Xocoveza is a mocha stout brewed with cocoa, coffee, peppers, vanilla, cinnamon and nutmeg. Yeah, I thought the same thing, going to be an overdone spice mess, though I know Stone isn't in the habit of putting out beers like that, so yeah, here we are. The original idea was a take on a spicy Mexican hot chocolate, so let's see! Bottled 10/02/16. 8.1% alcohol. Contains Lactose. #Xocoveza

Aroma so awesome I want to make out with it! Rich chocolate, awesome coffee, cinnamon, and spice delighting my nose! Chocolate flavor comes first, super creamy coating the palate on every sip. Not sweet at all. A really nice coffee flavor and roast complements that chocolate start.

Spicy peppers don't wait for an invite and shoot through the chocolate, nice combination. But while adding a little heat, this isn't a pepper beer, not overdone, just right. Vanilla and cinnamon add some intriguing complexities.

Finish is spicy with a low-grade lingering heat. So much happening but all in spectacular harmony. A+++ 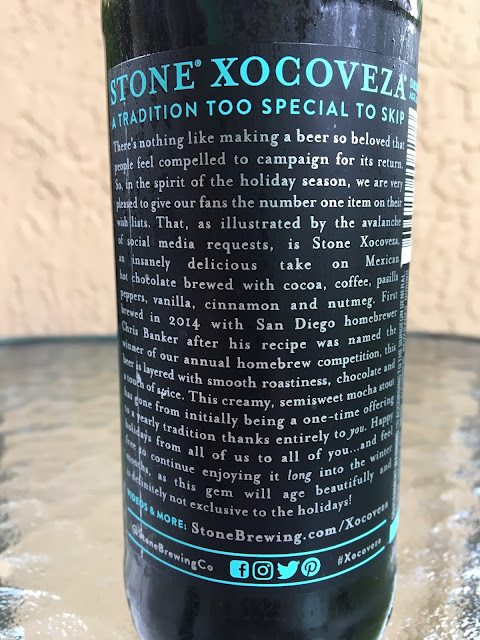 Posted by Beer Drinker Rob at 8:23 AM