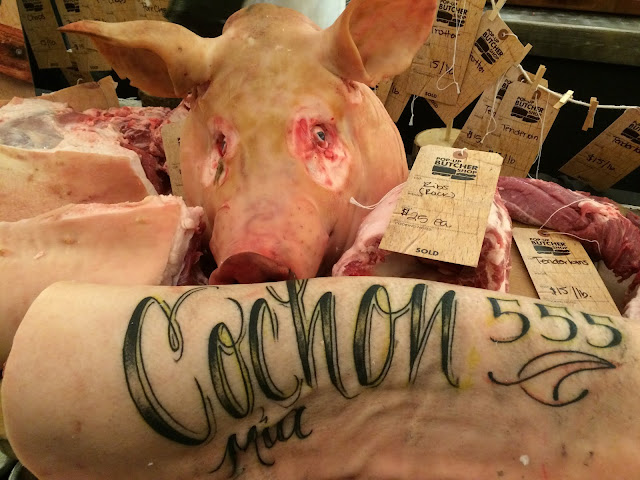 Cochon555 will return to Miami's Ritz-Carlton South Beach next Sunday, March 26, 2017. Cochon555 is a celebration of Heritage Breed Pigs in a nose-to tail cooking competition which supports safe, honest food in support of family farms and the Piggy Bank charity.

Cochon555 2016 was fantastic. I ate a lot of awesome pig dishes, I drank a lot of "Perfect Manhattans," met tons of fabulous chefs and other patrons, learned so much about the mission of the Piggy Bank charity, and (I think) even got honorable band membership in Public Enemy! I did NOT get a tattoo like that PIG!

This is a must-attend event, so much fun and for a great cause! Check out the video below then definitely GO BUY YOUR TICKETS! Want to see some pictures, check this out. Facebookers, here you go. I'll see you there!

Cochon555 stands for 5 Chefs, 5 Pigs, 5 Winemakers. There will be an epic competition in which the winner is crowned Prince/Princess of Porc with the winner competing later in the year against other city winners.

This year's competitors include Rick Mace & Clark Bowen from Team DB'QUE, Tito Vargas from The Bazaar by Jose Andres, Paula DaSilva from Artisan Beach House (I love her), Jeremiah Bullfrog from P.I.G. (Pork Is Good), and Rene Reyes & John Gallo from Pinch Kitchen.

Jimmy Carey from Jimmy'z Kitchen, Xavier Torres from Drunken Dragon, Adrianne Calvo (I love her too) from Chef Adrianne's Vineyard, and Sean Brasel from Meat Market among others will also be there with their own tasty food stations.

I expect a pig to be tattooed, that pic to be butchered and put for sale, great music, and lots of other fun surprises! Get ready to eat, drink and BE MERRY! Here is where you can get tickets!
Posted by Beer Drinker Rob at 6:42 PM