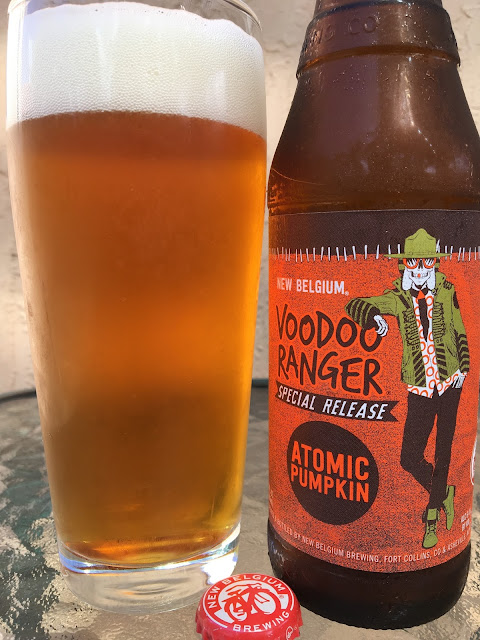 OK. Sitting here in Miami on a Saturday morning waiting to see what this bitch #HurricaneIrma has in store for us. A few days ago, I checked out New Belgium's VooDoo Ranger Atomic Pumpkin, my first pumpkin beer of the year. I decided to try something that seemed a little less typical than the normal dreadful onslaught of overly-spiced seasonals.

Yes, thank you. I am aware that this was brewed with cinnamon and habaneros and certainly expected spiciness, just was hoping for less of the pumpkin pie spices. 6.4% alcohol.

Lots of cinnamon and spicy heat in the nose. Some sweet pumpkin flavors come first but are immediately engulfed with tons of cinnamon and fireball candy flavors. The spicy, peppery habaneros make no mistake introducing heat to your lips and throat as well.

There are some spicy "pie" flavors too, nutmeg and allspice, but I got my wish for a different type of pumpkin beer. Unfortunately, the pumpkin was almost non-existent while the cinnamon and pepper flavors dominated everything else. Not a fan.