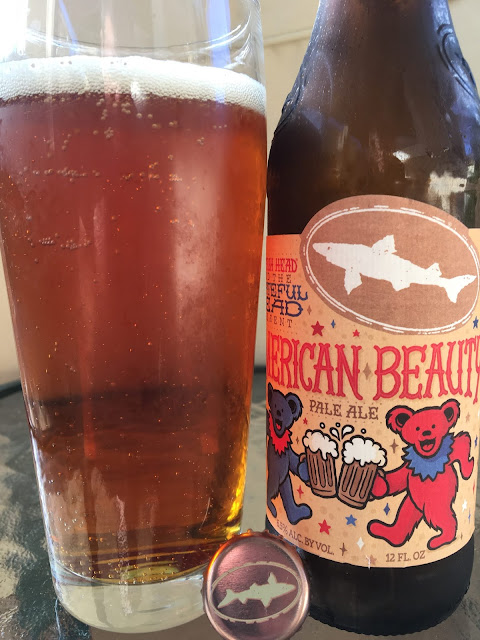 Dogfish Head and the Grateful Dead collaborated back in 2013 to create American Beauty Pale Ale. At the time, they asked on social media for suggestions for one quintessential ingredient that would represent the Dead (within reason, of course).

I submitted at least half a dozen what I thought were great choices. In the end, granola was chosen. If I had known that something like granola was an "ingredient," I'd have probably submitted ice cream or other already prepared food "ingredients."

When I saw the beer on the liquor store shelves, I didn't remember if I had tried it or not. Apparently not. I was wondering why, but have two theories and both could be correct. First, granola isn't an ingredient, and I was probably pissed about that choice. Second, the beer was released in wine bottles in 2013 and a few other times since then. And large format is a rip off. #BomberBoycott

Not much of an aroma. Nice bitter base, some citrus flavors to start. Honey and granola definitely show to create a balance. Simple, soft but nice flavors, and my wife loved it!