OK. Tonight I'm drinking the massively-hyped Brooklyn Black Ops brewed by the Brooklyn Brewery in Brooklyn, New York. The label starts out, "Brooklyn Black Ops does not exist." So I will play along with their little game. This wine-bottle-sized beer was aged in a bourbon barrel for four months at which point it became part of only one of 1000 cases. They then had the privilege of charging me 20 bucks for the bottle; well, they and BFF Total Wine. That is the MOST I have paid for any bottle of beer by a lot! Better be spectacular!

The aroma didn't disappoint. Lots of chocolate and coffee, with licorice and dark fruits and cherries also contributing to a really terrific scent. The alcohol is noticeable but not overpowering on the nose. The first flavors I noticed were the bourbon and the woody oak. So the 11.6% alcohol was noticeable right from the start but not in a harsh way. Coffee, licorice, plums, raisins, and some vanilla are also key players. Very complex and creamy, and the flavors really stick to your palate for a long time. This beer is kinda flat, and I wish there was a bit more carbonation. I was also expecting and hoping for a fuller body--this was medium at best.

But here's what you should do. You MUST let this beer warm up from refrigerator temperature before drinking it. If you do not, you will be wasting whatever you drank in the first 10-15 minutes. I say that because after the first few sips of niceness, the bourbon alcohol is already dominant and annoying; but after it warms up, it is really an enhancer of the beer overall. Honestly, chocolate was available on the aroma, but then disappeared completely until the finale, what was left on my palate. I liked Black Ops after it warmed up, but the bourbon flavors were still a little annoying even then; and the licorice undertones were a bit much as well. Oh, and I am a little pissed off that I spent $20 on this! Do you remember when you used to split the gas costs with 3 friends on a college road trip? Everyone pitched in $5; that's EXACTLY what you should do with this beer, but remember to only start drinking after warming.

BTW, their own Brooklyn Black Chocolate Stout kicks this guy's ass all over the place, and for a mega-fraction of the price.

Sorry if you can't read the bottle. Yes, I suck, but the black bottle and silver writing say to me, "I don't want to be photographed!" So it's not only my fault. Come to my house and check the bottle if you'd like--but call first! 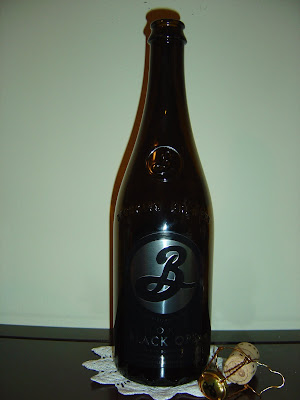 I agree that Black Chocolate Stout wins the battle of these two.

For sure, Mike. For lots of reasons. Not the least of which is that I woke up this morning with my mouth feeling like a drank a whole bottle of Beam. That bourbon aging was a little too much.

I agree. I'm not a liquor drinker so it really was a bit difficult for me. I actually went to bed the night I drank it thinking my head was going to be killing me the next day.