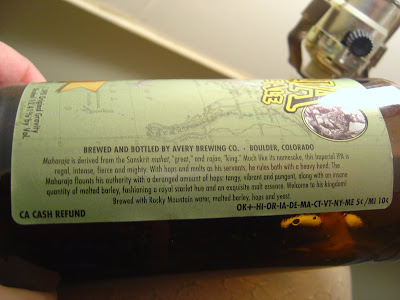 Roy Halladay perfect game? Check! Fireworks after the game? Check! Salsa concert on the way out? Check! Was a pretty awesome day, except for the part where I got home in time to see the Flyers fuck it up and lose 6-5 in Game One of the Stanley Cup finals. Seriously, was either team playing defense? Sloppy. 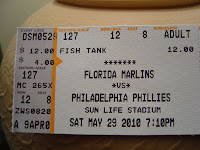 But yesterday was a fun time, including the hour or so "tailgating" with myself and two boys. We threw the football and tennis ball around while I had a few Sammys. Old dude next to me was happy when I got there, but rolled his eyes when I put on my Phils cap. Last time I took these two, we left in the third inning; but we stayed for the duration this time. They were troopers in a 1-0 game that was "action-less" to anyone but a true baseball fan (remember the Phils didn't even score an earned run!). They will tell their kids, though, that they saw only the 20th Perfect Game in over 100 years of pro baseball!

In celebration, I pulled out The Maharaja Imperial India Pale Ale 2010 brewed by Avery Brewing Company in Boulder, Colorado. I pretty much already know that this is going to be a spectaculiferous beer, and also that it's best fresh (if you like the intended bitterness). What I mean is that I had 2009 Maharaja before, but I also had the opportunity to sample a completely mellow 2007 Maharaja (see #12) three years after bottling. Both delicious, but I love me some bite! The label says 102 IBUs which pretty much means beware and be ready. Bottled March 2010 Batch 11. And I'm pretty sure I've captured the bottle story above in my photo.

I didn't serve this too cold, definitely key. I actually only put it in the fridge this morning (it was 7 am, but don't judge my early Sunday rising). Holy Moly! Fruity pineapple and peach nectar aroma with a touch of pine tree in the distance. Fruity sweet flavors start things off, very tropical, with a hint of honey and perhaps some caramel, too. That's before a rush of burning and biting hops overwhelm those fruits. But you know what? As aggressive as that tangy bitterness was, it never crossed past the balanced line to assholeness. Now I'm not suggesting this wasn't bitter with a gigantic kick, just that enough sweet balance was there for total enjoyability.

Spicy black pepper then comes in about that time you realize that undetectable 10.41% alcohol is warming you up. Yes, I know I said "realize" and "undetectable" in the same sentence, seemingly contradicting myself. That's just part of the joy of me! Pine flavors and oily texture; yes a medium, chewy body. And the carbonation, as fine and creamy as the bubbles were, well, was still prickly in my mouth. This is an A++ beer and you should seek it out. The best that Avery has to offer, hands down! 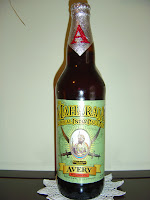 A great beer to celebrate a great moment for Doc.

Now if the Phils could just score some runs. It's been a bit of a dry spell.

I had the Maharaja on draft for the first time a few weeks back. It was mind-blowing. perfect balance.

I've never had it on draft, but wow is this beer excellent. Was excellent last year, too, but this time I wont wait another year to pick up some more.

I looked for this at Total Wine today and they were totally out. I'm currently perusing their website's contact information to see who I need to cockpunch for this travesty.

I'm extremely intrigued. This beer sounds delicious. I'm always on the lookout for a delicious and balanced (that's key) IPA.

We actually did an IPA tasting a few weeks ago and I would've absolutely killed to have had this beer in it, had I known. Maybe next time.

Avery makes some good beers generally. How does the Maharaja rank for you personally, on your list of favorite IPAs you've had?

Another you should try if you can. And Avery is very well distributed.

This is one of my favorite beers out of any, not just IPA's. Absolutely fantastic. Don't get me wrong, you need to like the bitterness, but it is still balanced.

Okay, had the opportunity to try this the other night. You should know that IPAs are not my favorite style. And I loved this beer.

It is super well balanced. There is a malty component that balances the fruity hops really well. The beer can taste syrupy in the mid palate, but then gives a nice acidic kick on the finish. I absolutely loved the exotic fruits and citrus in the beer.

One of the hallmark IPAs in my opinion. It stands with the Stone Ruination and Dogfish Head 90 Minute as one of the exemplars of the style.

Thanks for the recommendation.

Yeah this one's great. Glad you liked it. In the meantime, I reviewed Bittersweet Lenny's RIPA and Double Dog DIPA. You should try both of those too! You'll be an IPA and Double fan before I wake up tomorrow!